I finally decided to share my two cents of opinion as I was really struggling when decided to switch from iPhone SE to the iPhone X / XR as these two I was considering from the start to choose from (exact same price in my area for new ones).
I have read this forum for longer time - great opinions (hey thanks for those everyone!, really helped me), great feedbacks however I guess in the end everyone must pick the product in accordance to specific needs.

To sum up - I decided to change as my excellent SE phone started to get not enough space (32 gb), the screen suddenly seemed not big enough when reading things and also realised the quality of pictures & videos could be better (my daughter was born so I wanted to improve those for more "crisp" memories . And so I started to search as Im not following news on daily basis only when I want to actually buy something I need.

I have read multiple forums / watched many reviews on X / XR, compared specs, looked on the cons and pros and so on. In the end I came up with conclusion that in terms of functionality which is number 1 for me the XR wins (longer battery life, new A12 tech, faster FaceID, more space, better camera, stereo sound recording, louder sound).

Based on all this I went to the store and ... everything has changed when I took both phones in my hand and immediately hit me as for first impression that there is no way I can comfortably grab the XR phone - not to mention - operate it with one hand (despite my hands are not small) and also the difference in weight felt significant (even its only 20g difference). I cant imagine how it would go worse with any case applied ...

So in conclusion I bought the iPhone X (quite happy with it now, adjusting to the bigger size as SE was really small) but in the end I felt really dissapointed I was somehow forced to switch my decision ...
I felt that this phone is completely not friendly for me in ergonomy matter. It surprise me even more because on paper it looks that there is not that much difference when comparing size/weight to the X model ... but it makes huge difference for me when holding the actual devices.

I decided to share this opinion as on many reviews I found on these phones this matter is rarely raised and pointed out so - maybe its only my problem but on the other hand - later on now I have found some comments that pointed out this exact matter also from other users.

Anyways, hope that the next generation will bring something more handy, like refreshed iphone 8 size phones (in range 4,7 - 5,5) which probably would suit me as best compromise

Regular_User said:
I felt that this phone is completely not friendly for me in ergonomy matter. It surprise me even more because on paper it looks that there is not that much difference when comparing size/weight to the X model
Click to expand...

I'm really surprised that you were surprised..
The SE to X is a big change in size, weight - everything..

I really hope there will be something new, eventually, that is "sub X/XS sized".
In my opinion, they are too big (and heavy) to be the smallest option in the lineup. 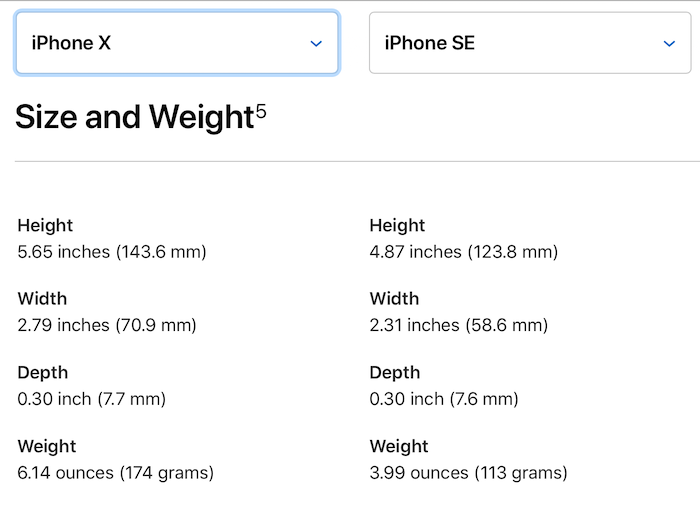 Oh, sorry I can see it now - I missed it in the line you quoted - not what I meant.
I was still comparing XR and X in here. It should go like this:
I felt that the iPhone XR is completely not friendly for me in ergonomy matter. It surprise me even more because on paper it looks that there is not that much difference when comparing size/weight to the X model.

The X immediately felt better when I started to play with it in the store holding it one hand comparing to XR.
Nevertheless the difference in size of X comparing to SE is of course also a big change in size, no questions about it, but still - the XR occured just too much for me, the X is on the thin verge of acceptance for me in terms of size .
Reactions: turbineseaplane