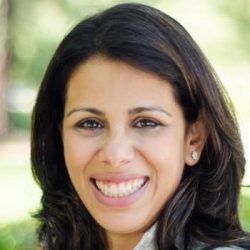 Apple has hired the lead doctor of Stanford University's digital health initiative, Sumbul Desai, to take on an unspecified role in one of the tech company's health projects. The hire was rumored earlier this month, but Stanford Medicine confirmed it to Internet Health Management on Friday.

Desai headed up Stanford's Center for Digital Health, launched by the university's School of Medicine in January 2017. The center's mission is to enhance Stanford's digital health initiatives by collaborating with technology companies and undertaking clinical research and education. The center also helped develop MyHeart Counts, a cardiovascular disease app built using ResearchKit in collaboration with the University of Oxford.

Apple has not revealed what role Desai will play at the company, whether she might join the team working on ResearchKit, HealthKit, and CareKit, or if she will work on an unrelated project. Apple has made several healthcare-related hires in recent years. In September it recruited Dr Mike Evans, a staff physician from St Michaels Hospital in Toronto and an associate professor of family and community medicine at the University of Toronto. Two months later the company also hired Dr Ricky Bloomfield, who was director of mobile technology and strategy at Duke University Health System.

Apple has also hired Stanford doctor Rajiv Kumar, who has experience using HealthKit to help patients with diabetes, and Dr Stephen Friend, who helped build the data infrastructure for many ResearchKit apps.

Apple has kept quiet regarding what kind of products its health team is working on, but the company is known to be investigating advanced medical monitoring features, possibly for a future Apple Watch. The company is said to be working on implementing a new glucose monitoring feature and interchangeable smart bands, for example, while Apple CEO Tim Cook was allegedly spotted testing a prototype glucose monitor connected to his Apple Watch last month.

Apple is certainly going all in on health data.
Reactions: Icaras and 2010mini
Comment

If these initiatives don't involve any FDA approvals, with major hires like Desai, Evans, Bloomfield and Kumar we could hopefully see implementations sooner rather than later.
Comment

At the rate the FDA approval process goes, could be years before we see any significant products with consumer-focused health benefits. Hopefully this is a step in the right direction and one area that Apple could differentiate and dominate the market years in advance of competition.
Comment
F

Cool. I don't want to get sick. Figure stuff out.
Comment

It's a real shame that the health app is garbage and they would allow the watch to export gpx files
Reactions: Avieshek and DocMultimedia
Comment

I wish Apple would also get on the ball with integrating an Electronic Health Record for physicians; Hospitals are all beginning to use Epic, which is Windows 7-based, and is for all intents and purposes SkyNet. The only thing out there for Mac that I am aware of is MacPractice, which is expensive and which my colleagues tell me is not all that great. Even the better cloud-based EHRs are limited to Windows Explorer, and are not compatible with Safari. Sheesh....
Comment
You must log in or register to reply here.
Share:
Facebook Twitter Reddit Email Share Link
Register on MacRumors! This sidebar will go away, and you'll see fewer ads.
Sign Up
Top Bottom