I use Keynote for my teaching all of the time but the one thing that has always bedeviled me is: I want to use multiple slides - for song lyrics - with 1 accompanying complete and contiguous audio track of the song. I have not found a way of doing this as the audio obviously always stops when I move to the next slide. I don't want to chop the audio up into 6 segments either (if I am teaching theater songs it is possible to have a song that covers 6+ slides if the font is big enough to be seen on screen). Is there any way of doing this? Otherwise I have to toggle between iTunes or QT, which is a hassle in of itself.

The main challenge with any option is timings- making it so that the words are timed as close as possible with the music.

1. This option looks fitting for you.

2. Make it a one-slide presentation and have all of the lyrics appear & disappear as automatic transitions on the one slide. This involves using a lot of trial & error to work out when you want the next bit of text to appear in sequence after sequence and can be hard to get right so you can play it from Keynote and have it work as desired. It's also somewhat of a bear to edit should you want to do any editing later. Probably better options...

3. Build it as you are (multiple slides). Use a screen recorder like Snaggit. Start the music playing in iTunes or similar, start the presentation. Click slide-to-slide in sequence with the music (using your own knowledge of the lyrics to perfectly time when they appear in sync with the music). When done, crop the beginning and end of the video captured in Snaggit (to get rid of delays of manually starting things in separate programs). Play as a video file instead of using Keynote.

4. Same as 2 except save the manually-timed video out as a QT video file. Import into FCPX. Import the music into FCPX. Sync up the video & audio track. Export as a video file.

4B. If you go the FCPX route, you don't even have to manually time how long each slide is on screen. You could export them as a bunch of stills and then import the stills into FCPX and "stretch" them out to how long you want them on screen (in sync with the music), potentially using FCPX transitions if you want something prettier between slides than just "disappear" and "appear".

I'm sure there are more ways than these but I believe all of these will work fine for what you are trying to do.
Last edited: May 19, 2017

My preferred method is to use iMovie:
Since I do this on a regular basis, I have template files in Pixelmator for creating the lyric overlays. And various background images in 16:9 aspect ratio. This method allows me to swap out backgrounds without much effort.

I've attached a screenshot of what it looks like... 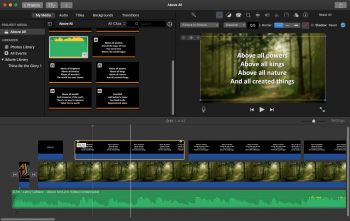 Keynote's Help is a good place to look:

Adding Soundtrack yo a Presentation

When you add a soundtrack to your presentation, the audio begins playing when the presentation starts. If there are slides that already have audio or video, the soundtrack also plays on those slides.

A file added as a soundtrack always plays from its beginning.

If you want to play your presentation on a different computer or device from the one you used to create the presentation, choose Keynote > Preferences (from the Keynote menu at the top of your screen), click General at the top of the preferences window, then select “Copy audio and movies into document.” Doing so ensures the soundtrack is available whenever you play the presentation.
Reactions: sinoue
You must log in or register to reply here.
Share:
Facebook Twitter Reddit Email Link
Register on MacRumors! This sidebar will go away, and you'll see fewer ads.
Sign Up
Top Bottom