Following in the footsteps of Dashlane, popular password management app LastPass has also debuted a new "Auto-Password Change" feature that is designed to let users enable a setting for automatic password changes.

Introduced last week to the company's Pre-Build Team, the new Auto-Password Change in LastPass is now available for all beta users in Chrome, Safari, and Firefox at no charge.

According to LastPass, Auto-Password Change has been developed to help its users initiate frequent password changes following major security incidents like Heartbleed, an OpenSSL vulnerability that left hundreds of thousands of machines open to malcious attacks. 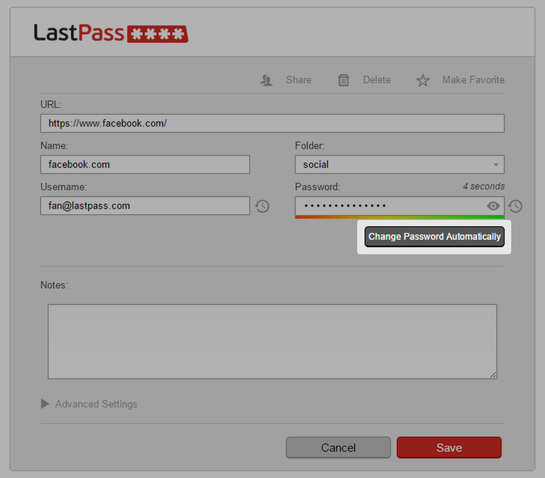 We're excited to announce that the Auto-Password Change feature we released to our Pre-Build Team last week is now available for all users in beta. LastPass can now change passwords for you, automatically. We're releasing this feature for free to all our users, on Chrome, Safari, and Firefox (starting with version 3.1.70).

Maintaining your privacy and security is our top priority. That's why we're doing this differently. We've implemented this feature to make password changes locally on your machine, ensuring we stay true to our mission and never have access to your data. All of your sensitive information is encrypted on your computer before syncing, and your encryption key is never shared with LastPass.
Click to expand...

After choosing the password update option, LastPass will open a new tab, log into the site and create a new password, updating the information both on the site and within LastPass.

That's what I call a quick response.

I will definitely do this. I've got a bunch of old/duplicated passwords I should change and have been too lazy to fix.

Hoping that 1Password follows this and does it too, but kudos to Dashlane and Lastpast for doing this though. It would help a lot of us, like octothorpe8, who are lazy and don't feel like going to every single site to change the password.

I'm excited to try this out and see how good it works on all the different sites and their different change password forms.

This is great. 1password can't be far behind. The various websites and services have made it too difficult to change passwords quickly (hard to find pages, arbitrary password rules, etc.) Acceptance of this kind of global password reset can't come some enough.

There were some things I like more on 1Password, but LastPass is $12 a year (unless you like ads, and I don't. According to their site, the free doesn't get unlimited sync on iOS or Android). One of the things I didn't like was my info (passwords) are on their servers, and 1Password it's local (unless you use Dropbox to sync). Unless that changed, but a lot of people like this one and Dashlane too. It's all fine, I think it's just important now a days to use a different, long, and unique password for everything.

So far I have nothing but great things to say about my experience with 1Password. The support is great and I like the product. Just keep the look out, they always have sales.
Last edited: Dec 10, 2014

This is a really cool feature! I'm surprised this post isn't getting more visibility.

I had a conversation with a coworker the other day who refuses to use password managers. He thinks it's much better to have ~4 different passwords memorized in his head that he uses everywhere. One day he'll see the light!
P

Dezryth said:
This is a really cool feature! I'm surprised this post isn't getting more visibility.

I had a conversation with a coworker the other day who refuses to use password managers. He thinks it's much better to have ~4 different passwords memorized in his head that he uses everywhere. One day he'll see the light!
Click to expand...

it took me a while to realize that I don't need to remember all my passwords, but now I can't live without my password manager. Even when I 1st got 1Password, I was afraid to make passwords over 10 characters and took me a while.

This is a cool feature, but don't some websites need you to confirm a new password (by email) before it even goes though?

I've already tested it with Mint and Facebook. Works really well. I'm sure some sites it will just not be compatible with.

The only downside I've experienced to using a password manager is when I'm on my phone trying to log in with an app. I have to pull up and copy my password from my vault in the LastPass app. Minor inconvenience considering the security of all my accounts. I'm hoping that as touchID becomes more prevalent in third party apps I'll eventually never have to enter a username/login on my phone again!
T

Been using LP for well over a year, as good as having something make my life easier as auto change of my passwords, i'd rather do it myself manually, since i know nothing will go wrong.

With any auto stuff, u have no idea.