Customizing the home screen has become popular since the release of iOS 14, and many users have been adding custom app icons to their home screen using the Shortcuts app to create unprecedented levels of personalization. 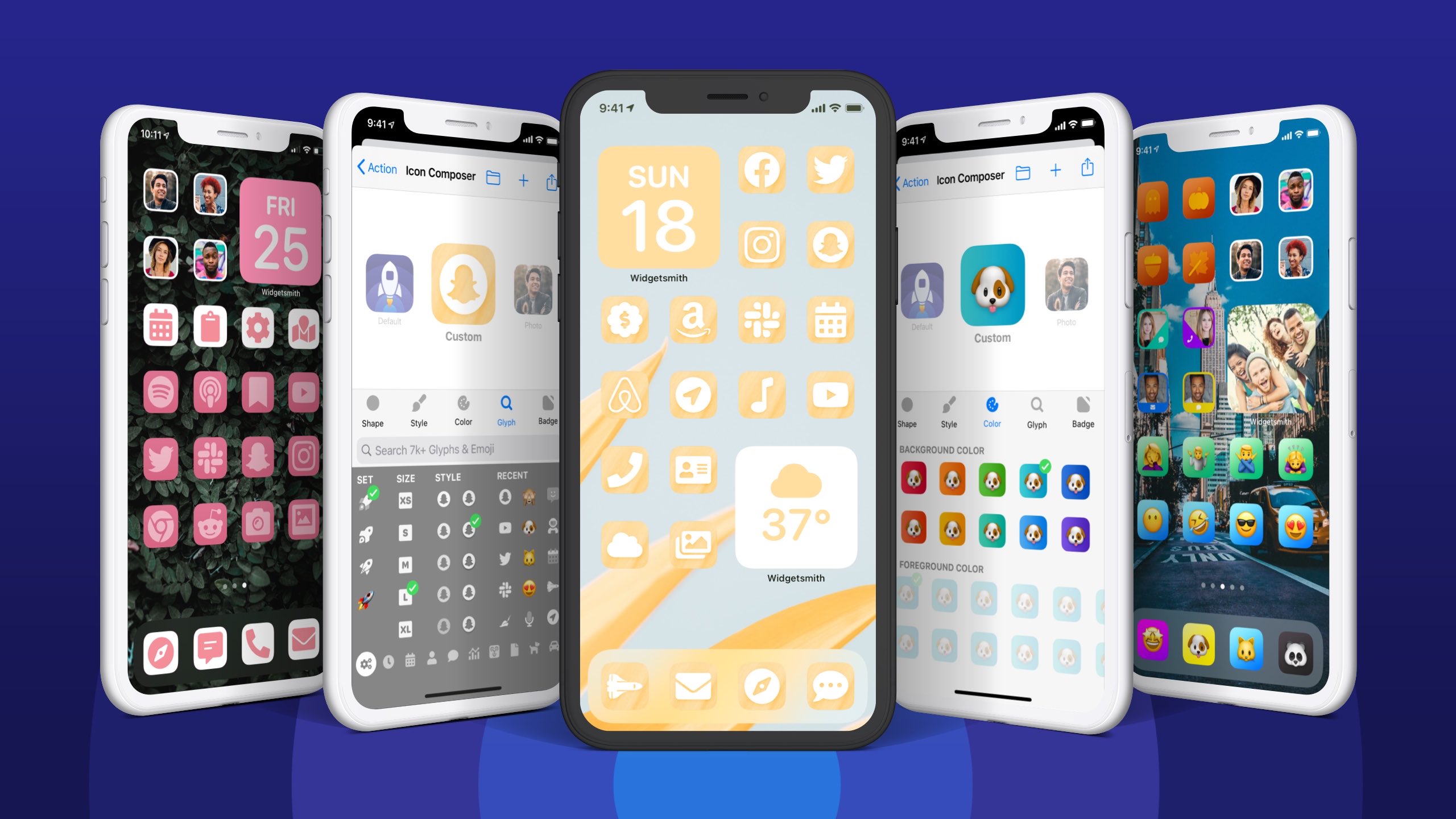 The only problem with this method is that it kicks you to and from the Shortcuts app whenever you open an app with a custom icon, which isn't a great way to optimize usage and can be annoying. However, thanks to the latest update to Launch Center Pro, there's now a way to add custom app icons without going anywhere near the Shortcuts app.

Launch Center Pro manages this by using configuration profiles to add custom icons to the home screen, while a new Icon Composer lets you create unique icons with options to change icon size and color, and use glyphs, photos, shapes, names, and badges to supplement it.

When you've finished creating your icons, a downloadable configuration profile is generated by Launch Center Pro that you then need to install on your device.

The developers say each profile is cryptographically signed for security, and just contains links to web clips that launch each customized app on your iPhone or iPad. Once the profile is installed, your custom app icons appear on the home screen, where you can rearrange them to your liking.


As the video above demonstrates, it's a neat workaround that should prove popular until Apple decides to add a native ability to customize icons in iOS, and the app's interface makes the whole customization process easier and a lot less time-consuming than the Shortcuts method. The only limitation is that if you want to customize the icons of Apple's stock apps, these do still need to launch via Shortcuts.

Launch Center Pro is a free download on the App Store, but the Icon Composer is a $20 in-app purchase. In addition, the app offers a $14.49 subscription bundle that includes the icon composer as well as several other features. A free 7-day trial is also available.

Seems like a useful way to spend 20+ bucks (rolls eyes).
Reactions: Icaras, Jada34, Photopooba and 7 others

Very very expensive even if we remove the 30% on both the pricing!
Reactions: Nica, iAFC and LFC2020
R

People wasting their time and money doing this?
It's tinkering for the sake of tinkering: Fun but 10 minutes later, bored.
Reactions: Icaras, mhnd, Nica and 2 others

I couldn't imagine how annoying it would be to have to route every action through the shortcuts app!

I'm open to iPhones having some personality, so if this floats your boat then go for it!
Reactions: Jada34, CanadianGuy, Nica and 1 other person

I am always fascinated by the negative influence that parameters such as "options" and "choice" can have on some Apple users
Reactions: SBlue1, nerdherdster, Dr McKay and 24 others

The preview image shows exactly why this is not needed, look at how busy and fisher price the interface looks!
Reactions: SBlue1, Icaras, Jada34 and 1 other person
M

$20 + $14.49 ... well played! I'm always amazed how hard working and how quick from trend-to-launch some talents are... should add: any purchases are well deserved!
Reactions: CanadianGuy

Are they using MDM to set this up?

Apple is going to shut that down fast. Did this company not remember the Facebook/Google and Parenting apps issue.
Reactions: Drumpf and Jason_G
K

WTF!! Subscription for icon packs and customizations? Android folks with their unique launchers and packs are must be laughing with this.
Reactions: nerdherdster, Dr McKay, Nica and 4 others
M

You don't like it - don't use it. But it shouldn't be banned because one moron is not happy.

Anyway I'm expecting they are using something they shouldn't be and Apple will 'fix' the hole...
[automerge]1603193786[/automerge]

Who is forcing you to buy it and install it?
Reactions: andy2112, ranphi, SBlue1 and 19 others
C

"$14.49 subscription bundle that incl...."
stopped reading after this.
Reactions: Nica, B4U, Ramchi and 1 other person

I don't like it either, but going as far as begging Apple to stop it is a bit extreme, isn't it?
Reactions: SBlue1, Dr McKay, Oblivious.Robot and 16 others
E

Anything involving the download and install of a configuration profile doesn’t sit right with me. Why potentially compromise the security of your device for something so cosmetic?
Reactions: 480951

People upset at what someone else does with their device that literally has nothing to do with them.

why would they ban air and why would you hope that happens because it’s not something you prefer?
[automerge]1603194344[/automerge]

averagenerd81 said:
People upset at what someone else does with their device that literally has nothing to do with them.

Seriously...the attitude and entitlement on this site is amazing
Reactions: Sealinski, Jd3774life, Dr McKay and 8 others
S

This would perfectly complement the tacky blue of the 12. Hardware and software wise we're at Android level, only the Apple prices remain
Reactions: Okasian

Oh no! People have more choice in making their phones look the way they want, but don't have to change anything if they like it the way it is. The absolute horror!
Reactions: ranphi, QuarterSwede, nerdherdster and 11 others

xxray said:
Oh no! People have more choice in making their phones look the way they want, but don't have to change anything if they like it the way it is. The absolute horror!
Click to expand...

Wanted797 said:
Are they using MDM to set this up?
Click to expand...

I don't think so. It looks like they're just generating the config profile file on the fly, then making it available for you to download and install manually. If you were enrolling your device in MDM, the profile would just appear on your device without the additional step of jumping over to settings and installing it.

eastwoodandy said:
Anything involving the download and install of a configuration profile doesn’t sit right with me. Why potentially compromise the security of your device for something so cosmetic?
Click to expand...

Configuration profiles in and of themselves don't compromise security, since Apple allows you to see exactly what the config profile is doing when you install it. There's really no ability that I can see to hide malicious functions inside a config profile - the install screen and the profiles screen show you exactly what they're doing, and they're static files that can't be updated remotely.

The danger would be if they were doing MDM, because once you enroll in an MDM, they can pretty much do whatever they want to your device. They could, on the fly, change the config profile and push a new version out to your phone without you doing anything or even knowing what they're doing.
Reactions: Sasparilla, AnTanCol and cambookpro

Kind of reminds me of the early Mac OS 8 control panel Kaleidoscope that allowed complete customization of the GUI. There were some cool designs but man there were some truly hideous ones too lol.
Reactions: iAFC
You must log in or register to reply here.
Share:
Facebook Twitter Reddit Email Share Link
Register on MacRumors! This sidebar will go away, and you'll see fewer ads.
Sign Up
Top Bottom