Warner Bros. Entertainment and TT Games' LEGO Star Wars: The Complete Saga, a part of the popular LEGO series of video games, has arrived in the App Store.

The game is a combination of two games released in 2005 and 2006 called LEGO Star Wars and LEGO Star Wars II: The Original Trilogy and is credited with not only revitalizing the LEGO brand, but also kicking off the successful LEGO video game series.

LEGO Star Wars is a 3D platforming game that involves light puzzles in levels that re-tell the stories of all six Star Wars films, allowing players to play as characters such as Obi-Wan Kenobi, Luke Skywalker, Han Solo, Darth Vader and over 100 others.

While the game doesn't include iOS game controller support, it does, like the other LEGO games, allow users to use either the "classic" or "touch" control scheme. 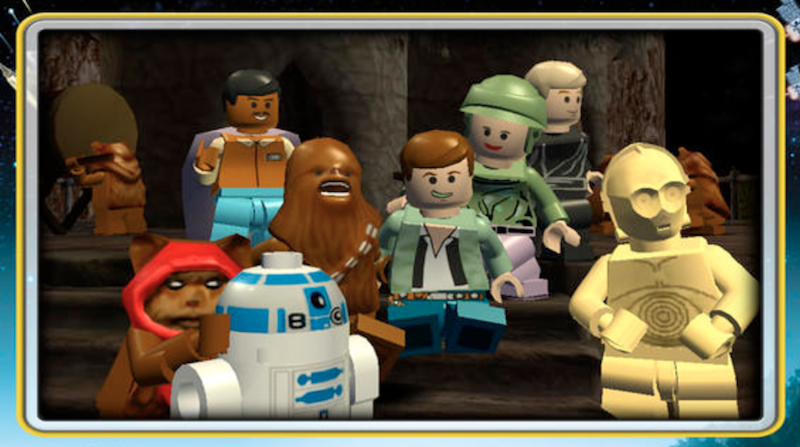 From the Trade Federation's "negotiations" with Obi-Wan Kenobi and Qui-Gon Jinn in The Phantom Menace to the space battle above Endor in Return of the Jedi, play the most memorable and exhilarating scenes from your favorite episodes. Also unlock special bonus content featuring Bounty Hunter missions, a special Challenge Mode, Arcade Levels, and more!

Play as your favorite Jedi Knight or Sith Lord! There are over 120 playable characters to unlock, including Luke Skywalker, Darth Vader, Han Solo, and Boba Fett.

Which side of the Force will you use? Both dark and light side characters have their own unique Force abilities. Will you use a Force Throw to defeat the Jedi or choose your Lightsaber and Force Push to take down the evil Empire?

Smash objects into LEGO bricks and switch characters on the fly as you play through different story levels. Create your own Star Wars character mash-ups like Han Windu and Lando Amidala!

Switch between "Classic" and "Touch Screen" controls to find the play-style that suits you best
Click to expand...

LEGO Star Wars: The Complete Saga is available in the App Store for free. Episode 1 is a free download, but Episode II to Episode VI are in-app purchases. [Direct Link]

The only one I'm seeing is the yoda chronicles
Comment

I played these when they first came out and they were surprisingly quite enjoyable. Glad to see them on iOS.
Comment
N

do they have multiplayer support? the xbox360 version had it, was great fun..
Comment

I used to have this on my xbox 360 (back when I used to have an xbox 360) and it is an awesome game... and for once it looks like freemium done right where first episode comes free as a demo and then there is a single reasonably priced IAP to unlock the rest of the game - no constant nagging for microtransactions before you can move forward.
Comment

What's with the focus on the U.S. App Store? This was released globally, why such a inward-looking title?

The San Andreas article also has the same self-serving style. You are aware that the internet, and this site, is read by people outside of the United States?!
Comment
L

BillyBobBongo said:
What's with the focus on the U.S. App Store? This was released globally, why such a inward-looking title?

The San Andreas article also has the same self-serving style. You are aware that the internet, and this site, is read by people outside of the United States?!
Click to expand...

Wait...you mean there is a world outside of the U.S.??
Comment
O

MacRumors said:
LEGO Star Wars: The Complete Saga is available in the App Store for free. Episode 1 is a free download, but Episode II to Episode VI are in-app purchases.
Click to expand...

skywalkerkenobi said:
Great game, I have the mac version.
Click to expand...

Too bad they have to go the in-app purchase route to get people to play buy this. I still prefer a 7-10 game with everything included.
Last edited by a moderator: Dec 12, 2013
Comment
J

Don't worry. He's only funnin' ya. There isn't.
Comment