Once you've lived with your monitor for a while, please drop by into this thread to leave a review

Feel free to make a post with your initial thoughts then continue to update your post so that it results in your overall review. (Feel free to bump the thread by posting a link to your 'review post' to say you have updated it if you like.)

I think the thread may help others further down the line and eradicate the need to trawl through one big owners/discussion thread which I imagine will get very big over time.

I ordered 2 monitors. Monitor #1 USB-C port w/ the power fails to keep signal when the cable moves slightly, this is not normal behaviour. Using the same cable from my first test, monitor #2 doesn't have this issue at all.

I'd read in this forum (or the issues thread) of people blaming the cable, I had the same issue w/ 2 different cables on monitor #1.

This seems to be a bad manufacturing process prune to premature failure, specially if at start it's not a solid connection.

I now worry in the overall quality of this product.
Comment

Not a detailed review (as we pretty much know most of the pros & cons about these by now), but a few images/videos concerning the 460 GPU's power, I found when I initially tested them (on macOS 10.12.3). 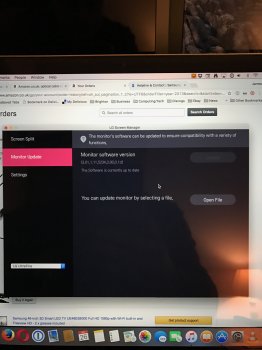 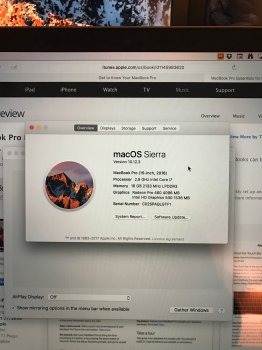 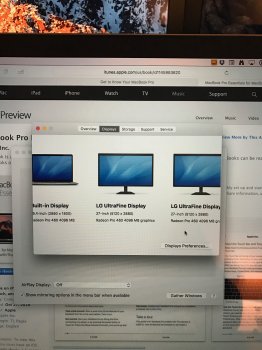 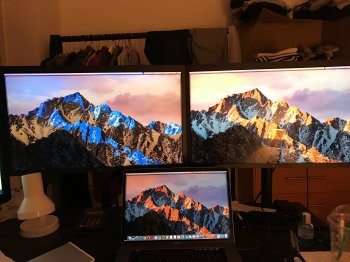 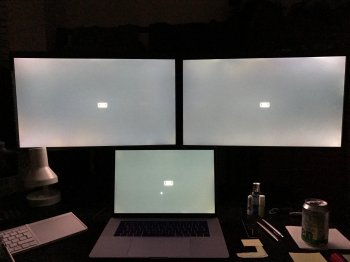 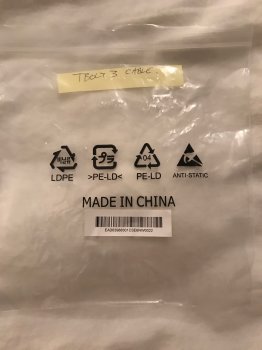 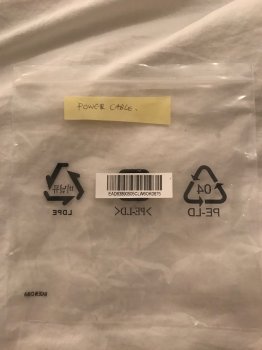 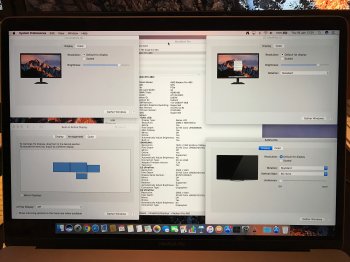 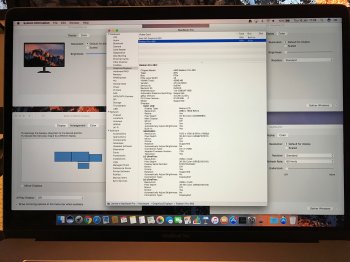 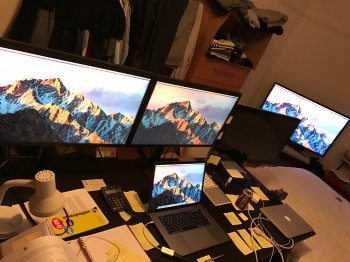 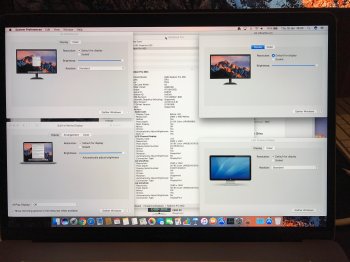 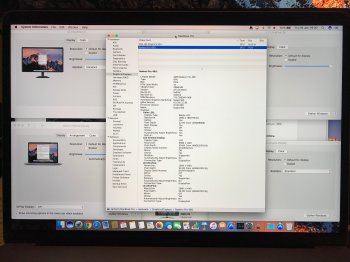 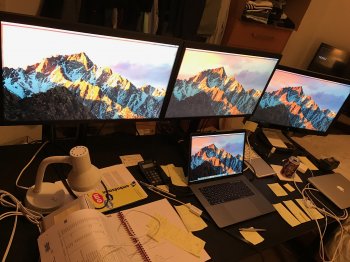 
So I managed to get F O U R (!) screens going at once from a maxed-out 15" MBP (2016). The only thing to note is that, running 4 x 4K YouTube videos in fullscreen EXTENDED display mode caused buffering issues, and this is media streaming from the Internet rather than local, so more demands are being placed on the GPU and the network, obviously. So with local media, at various encodings, one may get completely different results which I haven't tried.

Incidentally, the fans sound REALLY loud in the vids, but mostly that's the iPhone 7 Plus's mic making them sound so loud. Yes, they are making a decent amount of noise, but they don't sound quite that loud in reality. But really, running a heavy GPU intensive task such as this is obviously going to push them to their limits.

Though, it's certainly interesting just how powerful the discrete GPU is (as it runs all of them not using the integrated one at all), at least on the maxed-out 15" model with 460 GPU. ;-)
Last edited: Feb 14, 2017
Reactions: Weaselboy and iBrooker
Comment

My review of the 5K LG Monitor.

TLDR: A fantastic monitor with some niggles - I was quite torn, decided to send it back - then changed my mind!

As many of you will know, I was one of the first to get my hands on this monitor. It was immediately apparent that the display is stunning. The colour, the brightness, the sharpness - this monitor has a LOT going for it.

So why did I want to send it back? There were a few reasons.

Personally I feel 27" is a bit small nowadays (and this is a small 27" monitor at that, the screen measures 595x335mm - my older 27" measured 585x365mm - so was a fair bit taller) and I also feel 27" is a bit small for the default resolution. I feel the default scaled res results in text that is too small (it reminds me of those 24" monitors that were running at 1920 x 1200). This is aggravated by the fact that I am also not convinced the MBP was handling the 5K scaled resolution as well as it could have (as indicated by animations not being as smooth as expected, apps using 100% of CPU etc). Keep in mind that running a single 5K display is almost like running two 4K monitors.

With all that said, this is still a great monitor. I loved that I only needed to connect one cable to my Mac (that in turn, thanks to the hub, connected my iPhone, audio output, external disk, Kindle etc), or that I didn't have to bother with an on/off switch and that I didn't need to adjust brightness through a control panel.

If this monitor was 32" it would have been as close to perfect as we'll get right now. But since it's not, if you have a hefty Mac, running it at 2048 x 1152 is, imo, the perfect resolution for this monitor and will not disappoint. Just keep a look out for backlight bleed and colour uniformity (which unfortunately is common no matter what monitor you buy) - just keep sending them back until you get one you are happy with, and when you are, happy you will most definitely be!

I've held on to mine because of a number of reasons:

- I was offered a 'goodwill gesture' for some issues I had with some Apple products
- The convenience - no need for an on/off switch, brightness controls on keyboard, even my HD seem to undock itself when the screen went to sleep
- I sent my MBP back, so hopefully this year's model will have the extra oomph this monitor needs
- But in short, because I don't think a comparable screen will be out anytime soon - so this will do me until then
Last edited: Apr 19, 2017
Comment
T

As posted on another thread, I give this an 8/10, coming from an Apple Thunderbolt Display. I have a 702 model with pretty much no discernible issues at this point.

Size and pixel density: Unlike the poster above, I find the 27in size and 5k resolution to be perfect since I'm coming from the Thunderbolt display and I valued the high pixel density. If I didn't, there are plenty of 4k 32in monitors on the market.

Image Quality: Image quality is amazing with everything looking extremely crisp in a way that the Thunderbolt Display never rendered. I love the colors and contrast - when I look at some of the DSLR photos I've taken, it's almost like rediscovering them again for the first time. I can see a little bit of backlight bleed if I'm looking at a completely black screen but I think this is an edge case problem for the target consumers for this monitor.

Build/Design/Features: I like the overall design minus the larger chin up top but overall it's very minimalist in a good way with clean lines. In contrast the Apple Thunderbolt Display always looked like a bit of an overbuilt toy to me. The build quality definitely is more plasticky but not that bad. One major negative is the limited number of ports - it's fine if there's only one thunderbolt port but there should've been more USB-C ports on this device. I'm ok with using dongles but there needs to be more ports for this to be a "dock."

Sound: Adequate but don't really care either way. It's comparable to the thunderbolt display but i could live without it too.

Future: What i think LG could have done and what Apple should do for their "Apple Branded" monitor is to throw in the kitchen sink when it comes to display technologies - specifically let's do a 5k OLED display that supports HDR10/Dolby Vision. I'd be happy to have paid more if they made this the reference monitor but that was more than what should be expected at this price point.

Overall, this monitor is much better than what I expected given all the negative reviews due mostly to the amazing image quality. However, LG could've done more with this and I will be happy using this for a couple of years until the next major iteration hopefully by Apple this time.
Reactions: craig1410
Comment
You must log in or register to reply here.
Share:
Facebook Twitter Reddit Email Share Link
Register on MacRumors! This sidebar will go away, and you'll see fewer ads.
Sign Up
Top Bottom