Popular rugged case manufacturer LifeProof today revealed its newest protective offering for the iPhone 6s, the FRE Power, which promises to double the battery life of the smartphone while providing the expected protection the brand's previous products have afforded. LifeProof says the new case is fully waterproof and will let users take Live Photos and 4K videos "in almost every environment." 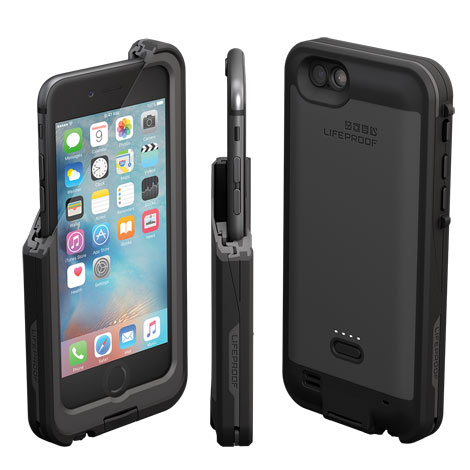 "We challenge our engineers to defy what is expected and they've gone well beyond that with our waterproof iPhone 6s battery case," said LifeProof President and CEO Pete Lindgren. "FR? Power provides protection and power so you can adventure further than ever before. The combination of iPhone 6s Live Photos and 4k video with double the battery life from FRE Power lets you capture better content and keep shooting longer than ever before."
Click to expand...

The source of the FRE Power comes from a built-in 2,600 mAh lithium ion battery, which LifeProof says provides "2x battery capacity" over the normal life of the iPhone 6s. On the outside, the case will protect from water, drop damage, dirt, and snow, the usual tenants of the LifeProof line. The company also ensures that the case's built-in scratch protection screen allows uninhibited access to the new features of the iPhone 6s, like 3D Touch and the front-facing retina flash.

Those interested can visit LifeProof's official website to pre-order the $129.99 FRE Power iPhone 6s case, which has an estimated in-stock launch date of Friday, November 6. The color options for the battery case include Blacktop, Base Jump Blue, and Avalanche, although the last two have no estimated release date. The new case is also available for last year's iPhone 6, but the company hasn't announced support for the iPhone 6 Plus or iPhone 6s Plus.

only for the 6s. meh. no love for the 6s plus.
Reactions: shamino

I was intrigued until I saw the price.
A

Not to a depth of 2m for up to an hour, which is what this case is rated to.

Until I see reviews stating you don't sound muffled to the recipient, Lifeproof isn't an via option for me. The last Lifeproof case I had that was waterproof (with 2 replacements), people kept saying it was hard to hear me. Shame, since this would be a great case to have...
Reactions: kpeex
A

While the iPhone 6s/6s+ certainly appear to be more resistant to water damage, they have no official rating and are, officially at least, not water resistant at all. If you're iPhone gets water damaged, you pay for replacement/repair.
No way I'd be taking mine near the sea, to a water park etc for photos without protection. I see a lot of go pros etc when people want to take photos in these kind of environments but for now the iPhone can't play. Just too costly if you drop it in the water, even a shallow pool would be a stress. If apple nail this kind of protection in the 7, and officially rate it to say IP68, go pro could be in trouble. Although it may not be until we have wireless charging and only support for wireless headphones that we get proper water protection - those damn connector holes..

yes and this is waterproof, there is a difference between those two words

BreuerEditor said:
Until I see reviews stating you don't sound muffled to the recipient, Lifeproof isn't an via option for me. The last Lifeproof case I had that was waterproof (with 2 replacements), people kept saying it was hard to hear me. Shame, since this would be a great case to have...
Click to expand...

I had the exact same issue, 2 replacements and this was the iPhone 5S case. I sold the last replacement for $5 because I didn't want to deal with it anymore. Its their membrane, its horrible if you never get water on your case and dust gets stuck forever. I said to myself never again will I buy one. I just stayed with my tried and true defender otter box as my case for the 6S. Whats funny is that they are the same company in the end.

Initial thought was , too bulky , Interest went up for the waterproof capability , dropped for being 2 metres.

Where do they get these iPhone images from? The space grey iPhone looks nothing like that image; in fact that looks more like the slate on iPhone 5.

The new space grey colours are only slightly darker than the silver options.

Tankmaze said:
only for the 6s. meh. no love for the 6s plus.
Click to expand...

How many days of battery life do you need? XD

thatanonymoususer said:
How many days of battery life do you need? XD
Click to expand...

You can never have enough battery life
A

two most important things not mentioned:

1. How do you charge it? I will not have micro-USB in my life ever again.

2. What is the voice quality like? Most waterproof cases muffle the microphone so badly it's impossible to have a pleasant conversation without removing the phone from the case.
Reactions: kpeex

Where are the battery cases that charge with lightning ports? I know apple used to restrict 3rd party companies from making lightning ports but I thought they were supposed to allow them to start using them?
Reactions: Aston441
A

jermy4 said:
Where are the battery cases that charge with lightning ports? I know apple used to restrict 3rd party companies from making lightning ports but I thought they were supposed to allow them to start using them?
Click to expand...

This. One of the major factors that moved me to Apple land was to get away from the horror of microUSB. I have seen like maybe two (?) iPhone accesories with lightning port instead of uUSB, and they were super expensive. Sigh. Hopefully this will all go away when USB-C is finally mainstream.
You must log in or register to reply here.
Share:
Facebook Twitter Reddit Email Link
Register on MacRumors! This sidebar will go away, and you'll see fewer ads.
Sign Up
Top Bottom