Los Angeles FC fans can now order food and drinks ahead of time directly on their iPhones at the Banc of California Stadium. 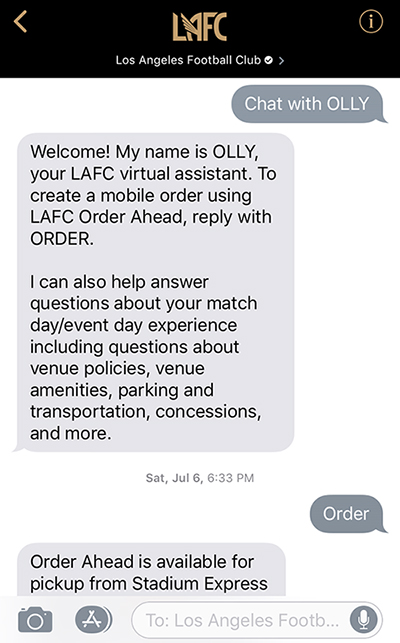 The MLS team has partnered with artificial intelligence platform Satisfi Labs to launch an order-ahead system through Apple Business Chat, allowing customers to order and pay for food and drinks from concession stands using their iPhones and pick up their orders from express locations at their convenience.

To order ahead with Apple Business Chat, fans can use their iPhone camera to scan a QR code in the stadium. This will instantly open the Messages app, allowing fans to chat with Olly, a virtual assistant powered by Satisfi Labs.

Apple Business Chat launched in iOS 11.3 and is now available in over a dozen countries. The platform has been adopted by over 30 companies, such as The Home Depot, Hilton, Wells Fargo, DISH, Burberry, American Express, and T-Mobile.

Apple Business Chat enables users to ask for information, schedule appointments, make purchases, and complete other customer service tasks directly in the Messages app. Business Chats must be initiated on an iPhone or iPad, but they can be continued on an Apple Watch or Mac signed in to the same Apple ID.

Oh, wow! I might try it at the next home game.

My condolences on your poor taste in soccer teams.