Mac App Store showing purchases for an account that isn't mine

For a while now, I haven't been able to do "update all" on the Mac App Store because there's a stray purchase in there. For some reason it thinks that I bought Angry Birds from an account that isn't mine. I don't have Angry Birds installed, and I've never bought Angry Birds. I've also never used Mail.ru.

I can't even buy and install Angry Birds and actually update it, because where I would usually purchase it I just get the reinstall dialog asking me to log into this email account that isn't mine.

Does anyone know how to get rid of this? 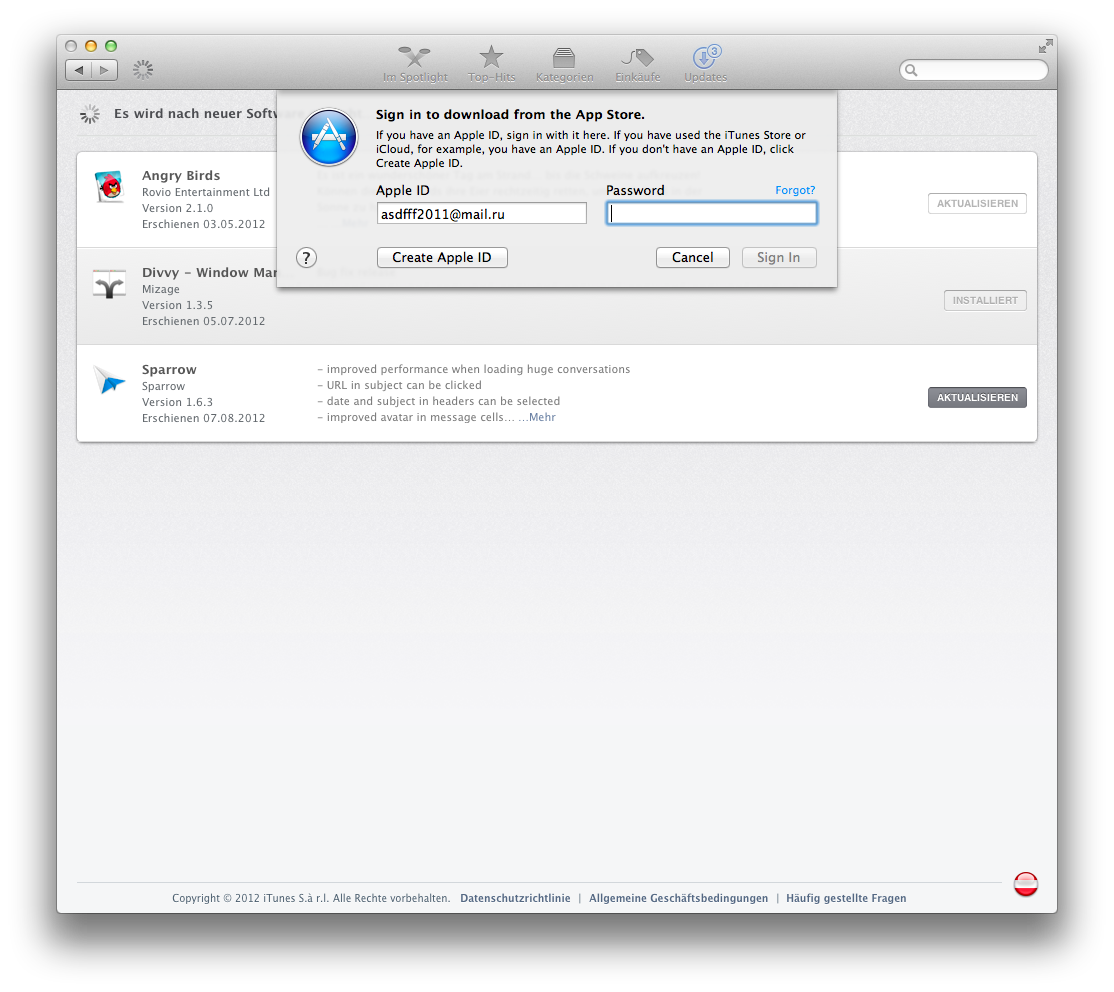 Contact Apple itunes support, if your account has been compromised you need to get this sorted out. It could also be an admin error, but better to be safe here:
http://www.apple.com/support/itunes/contact/
Comment

ProfMonnitoff said:
Does anyone know how to get rid of this?
Click to expand...

You need to remove your 'copy' of Final Cut Pro (or possibly some other app you've obtained).
Comment

Looks like someone has installed Angry Birds on your machine from a torrent or something.

I had a friend with the same problem. He had Flight Control on his machine which was downloaded from a torrent. It showed up in the APP store even though it was not bought through there. When he tried to update it, it did exactly the same as yours. It knew it was bought through a different account and was asking him to log in with a weird email address.

You must have angry birds somewhere on your system.
Comment

This situation usually happens when you download an .IPA file and the DRM inside is associated with some mail.ru guys. I don't mean that you pirated the app, it may not be you . But the .IPA file won't work (won't be sync'ed to your phone/iPad) unless you authorized this mail.ru account in your iTunes or you apply some illegal patch to your phone.

I'm quite sure it's not a hacking problem.

Update: Oh it's the Mac App Store. Then clearly someone has downloaded a pirated copy of Angry Birds or whatever on your Mac.
Comment
P

The problem was indeed related to Apple not releasing a demo for FCP X (there is one now apparently, but there wasn't when it first came out). I decided to not upgrade for the time being but forgot to clean up the related files. Easy fix of course