just picked up a 1.66Ghz Core2Duo model for £55. Spent the evening cleaning the poor wee thing up.

It's a shame. Whoever upgraded the RAM in the past has done a number on this. All the motherboard was held down with was double sided tape. None of the securing screws were inside it. Dust caked all over the processor and they have tried to force the Bluetooth chip off without removing it's bracket so it's damaged t a bit. Poor Mac.

So it's been dusted out, polished up, a whole new set of screws put in, a lovely fast SSD, fresh install of Snow Leopard and later I'll split the drive with boot camp and stick Windows 7 on there too.

I know you can get smaller computers these days with the Intel NUC and the new Windows Sticks, but I still think these old Macs look fantastic when you open them up. 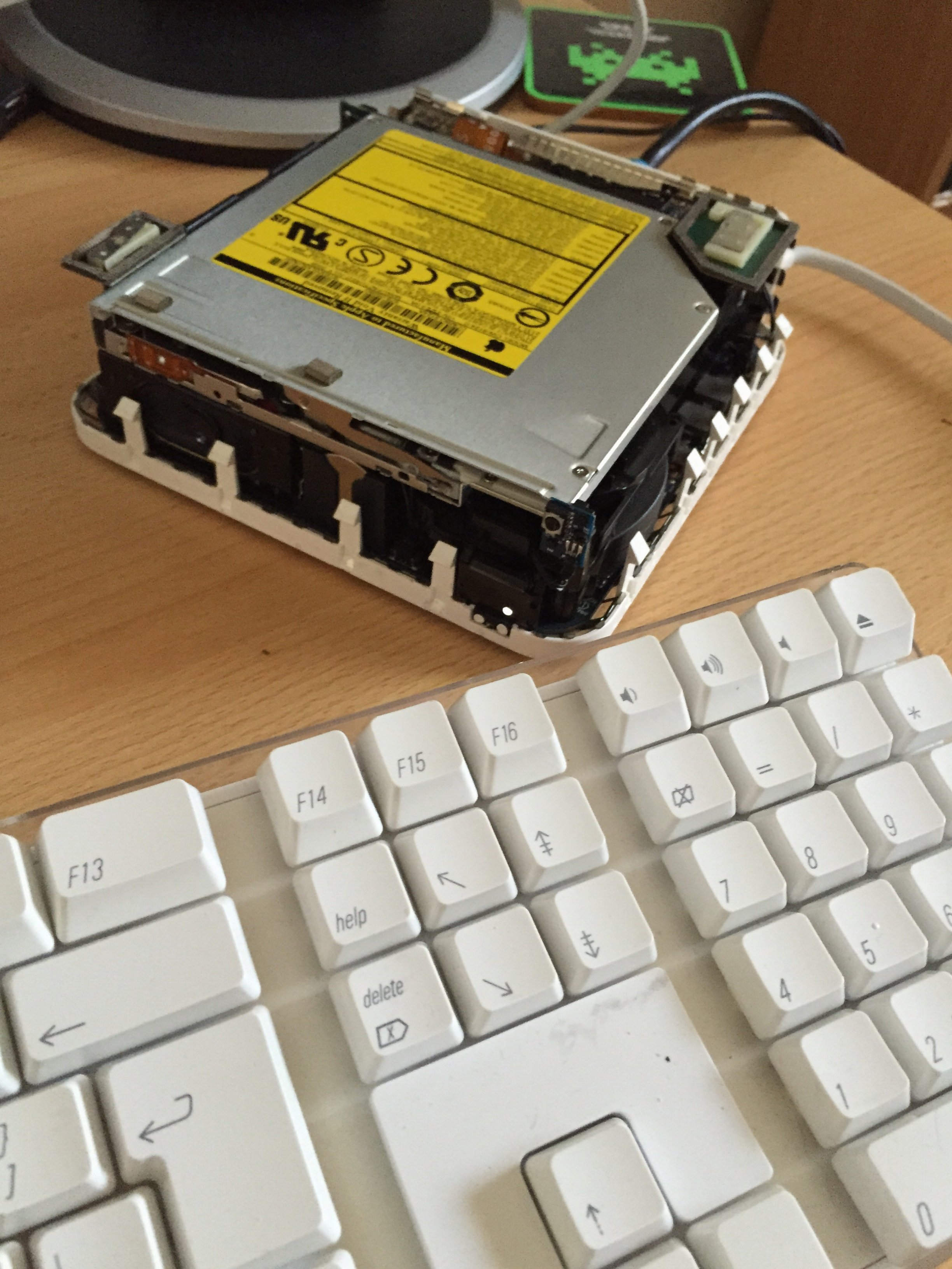 Also my bad. It's a CoreDuo. The older one. I'll be looking at grabbing a new processor for it at some point.

Nice, seems good for a neat project of sorts.

It's a lovely wee machine. Need to find out what Core2Duos are compatible now. Full updated as far as it can go now. I'll be sticking Windows on a partition tonight.

Then I tried to use boot camp 3.0.4 to install windows 7 32 bit in another partition. Boot camp could divide the hard disk smoothly and asked me to put it windows 7 cd then clicked next. I followed the instruction but it never boot up from window CD.

I am not quite sure why it could not boot from windows 7 cd.

I also tried to press "C- key " at the start to force it to boot from cd.
what it always happened was a white screen for a while then a folder with question mark.

Thank you so much

This is almost certainly the root of your problem.

Congratulations for the upgrade.

how did you go fo mini 2,1?
Did your ssd make a difference? Is it faster?

I followed the instructions here to upgrade the firmware to 2,1:
http://forum.netkas.org/index.php/topic,874.msg15441.html#msg15441
The SSD made a big difference over the slow RPM spinning hard drive...between that and the extra RAM it is much faster than the original setup.
Reactions: IoanNicut

Thank you very, very much!!!

Yes it allows more RAM - it'll actually allow you to insert 4GB RAM total - two 2GB modules (and use a little under 4GB - some of the entire 4GB is not used due to system overhead and the way memory is addressed), but I only had a 2GB and 1GB memory module of the proper specs, so I settled for 3GB total (which is 50% more RAM than it came with).
Reactions: IoanNicut

fhall1 said:
Yes it allows more RAM - it'll actually allow you to insert 4GB RAM total - two 2GB modules (and use a little under 4GB - some of the entire 4GB is not used due to system overhead and the way memory is addressed), but I only had a 2GB and 1GB memory module of the proper specs, so I settled for 3GB total (which is 50% more RAM than it came with).
Click to expand...

I will do the upgrade and keep you posted...

Good luck with it! I kept mine at Snow Leopard, but with all the upgrades I've read it is possible to put Lion on it if you feel adventurous and want/need to run slightly newer software

Did the firmware upgrade. Thank you!!! I have lion on it. Wanted to be able to run certain programs. What do you use your mini with SL for?

I was using it as a DDNS server and had it connected to a flatbed scanner for scanning old photos. It would also be my "emergency" internet/email machine if my primary went kaput (and was being repaired) for some reason. But is has since been retired.

I have connected the scanner to my 2012 Mac Mini, which is also serving as my Plex server, now that I'm slowly getting into Plex. I also picked up a Raspberry Pi a few months ago (I love to tinker) which now serves as my DDNS server.

So, unfortunately, the old Mini is sitting on the shelf. I'd love to sell it, but it won't fetch anywhere near what I have into it. Could probably get more if I parted it out, but I'd feel bad about it since it was my firt Mac back in 2007, when I switched from nearly 20 years of DOS/Windows.
Reactions: IoanNicut

I managed to do the efi upgrade and added some extra memory. Thank you for the explicit easy to follow instructions. It made a huge difference to me. I have now 4 gigs of memory. I have lion installed right now. Wonder if I could install a newer version. One such as 10.9

You're welcome and have fun with it. Installing 10.8 and above are not possible - they need a 64-bit machine and better GPU.
C

Not sure if the OP is still around but does anyone know what keyboard that is in the OP?

Also the shoddy RAM install was probably done professionally. That is where I see the most amount of jury rigging come from.

cynics said:
Not sure if the OP is still around but does anyone know what keyboard that is in the OP?
Click to expand... 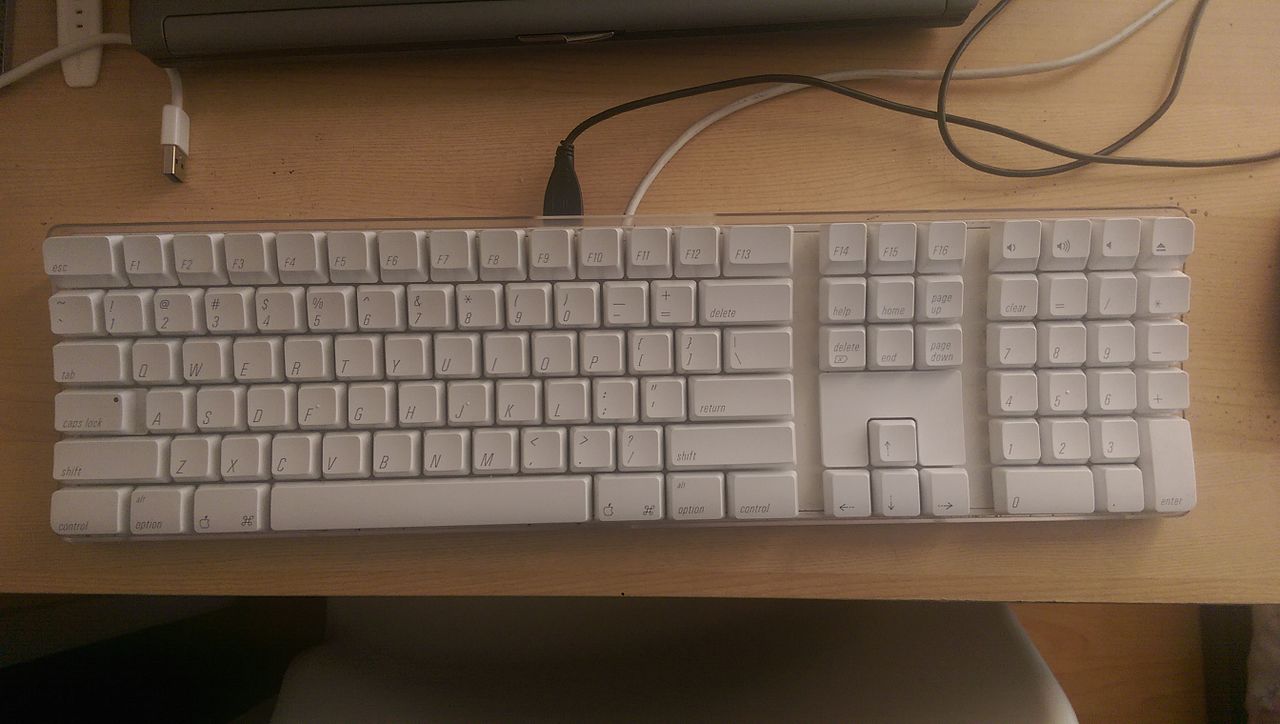 jpietrzak8 said:
I suspect that's an old Apple A1048 keyboard --

Ahh, thought it was something more modern.

cynics said:
Ahh, thought it was something more modern.
Click to expand...

Thats why it caught my attention. I've been considering a mechanic keyboard but not exactly sure which one....

I have two of those old plastic keyboards laying around, one wired, one wireless, that I switch into my rotation every once in a while

cynics said:
Thats why it caught my attention. I've been considering a mechanic keyboard but not exactly sure which one....
Click to expand...

My all-time favorite keyboard is the Kinesis Advantage; pricey, but very comfortable to use: 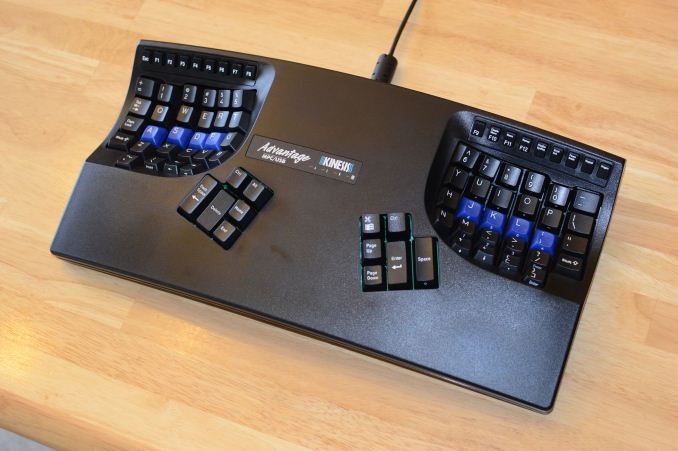