Mac Mini displays blurry and jagged on an Acer? 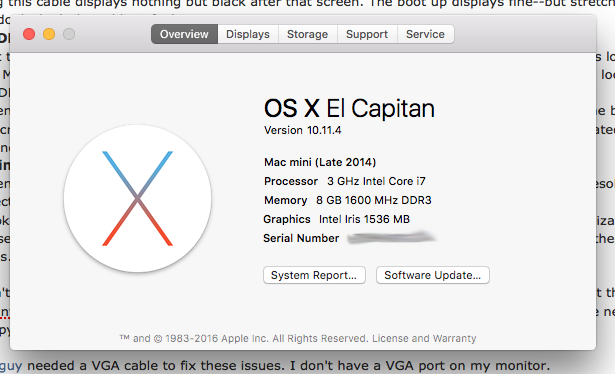 1. Mini DisplayPort -> DVI
The Linux/Windows machine connected to the very same monitor uses DVI to DVI. I thought, "Hey, that looks crisp, and DisplayPort's supposed to be fancy, so this sounds pretty dope."
I booted up my new Mac Mini--it displayed! It displayed in 1920 x 1080. It looked pretty silly. 2560 wasn't available in Displays no matter what weird hotkey tricks I used to try and force it.
"That's okay. It'll look better when I restart; OS X just hasn't recognized the resolution yet."
I restarted.
Little Apple loading screen (gray apple on black, progress bar) starts up... comes close to finishing...
Black screen.
Using this cable displays nothing but black after that screen, then a no signal sign. The boot up displays fine--but stretched wide, so I don't think the cable is faulty, and it can't be loose.
2. HDMI -> HDMI
Went to the nearest Mac store (third party), guy recommends me an HDMI to HDMI cable. I was looking for a Mini DisplayPort to DisplayPort, but the HDMI cable's all they've got. I figured that nothing looks good on HDMI, but I might as well try. Also, the 2011 Mac Mini they had in the store was hooked up HDMI to HDMI and looked fine.
System Preferences/Displays recognized the correct resolution, but the dock was slammed to the bottom of the screen where it was completely invisible, as was the toolbar. Everything's pixelated and bloated. I had to blindly click to get to the top left Apple menu and shut down.
3. Mini DisplayPort -> DisplayPort
System Preferences/Displays recognizing my monitor as an Acer B296CL at 2560 x 1080; the resolution is perfect. Everything's appears where it needs to be.
It looks awful. Looks like something out of a dusty library with crusty keyboards or a poorly lit hospital running a pirated copy of Vista. The font rendering is jagged as hell--the art itself is scratchy, and this is pretty bizarre to me, seeing that I used to run a Hackintosh that used this same exact monitor and had none of these issues. I've unplugged and replugged both ends--no difference. It's in there.

I don't think it's an issue of my eyes. Windows 10 font rendering looks bad on this monitor--but not this bad. Xubuntu looks perfect. Also, the 2013 iMacs at my university's computer lab look nowhere near this choppy.

This guy needed a VGA cable to fix these issues. I don't have a VGA port on my monitor.
This guy needed a special script to force his Mac to run RGB mode. He also had to disable rootless mode. Man, I already have a computer running off of crap I found on github.

How do I tell if my Mini's in RGB mode?
Is the graphics card just weak?
Is there another cable I should try, or something I might've missed? How do you hook up your Mac Mini?

MtRainier said:
3. Mini DisplayPort -> DisplayPort
System Preferences/Displays recognizing my monitor as an Acer B296CL at 2560 x 1080; the resolution is perfect. Everything's appears where it needs to be.
It looks awful. Looks like something out of a dusty library with crusty keyboards or a poorly lit hospital running a pirated copy of Vista. The font rendering is jagged as hell--the art itself is scratchy, and this is pretty bizarre to me, seeing that I used to run a Hackintosh that used this same exact monitor and had none of these issues. I've unplugged and replugged both ends--no difference. It's in there.
Click to expand...

If the Mac can see that the monitor is an Acer B296CL and has it at the correct resolution, this connection would seem to be the way to go. However, I think it might be a good idea to check the monitor to see if it agrees that the Mac is sending the correct data.

Also, I did a quick google of the monitor, and it apparently has two different DisplayPort modes, 1.1 and 1.2. The default for the monitor is 1.2, and I think the Mac should be able to handle 1.2, but you might try switching the monitor to 1.1 to see if things work better (the older mode might be more compatible).

Have you experimented with the settings (sharpness/brightness/contrast/etc.) on the monitor itself?
M

Thanks for replying guys! Alright, I switched with the DP modes, as jpietrzak suggested:
I didn't find much of a difference. Open windows appear to move a little to the left depending on which one I'm using--so I'm guessing OS X can detect which one the display is running? I decided to verify if I was crazy, so I made a side-by-side comparison across the three OSs. These are all using the same monitor with the same settings. Linux and Windows are on a DVI to DVI cable; OS X on Mini DP to DP. The jagginess problem isn't restricted to font rendering, and in screenshots the font rendering looks fine (when I look at said screenshots from another computer)--it's just more obvious when looking at text.

I can adjust brightness and contrast on my monitor settings, but they have no noticeable effect on how the image itself seems to be rendered. I would try adjusting the sharpness, but that's not an option with my monitor.

Is there this... universally used cable that I'm missing? Do I really have to go for the Mini DP to DVI converter, then chain that to a DVI to DVI, then hook that to the monitor? Would that work?
Reactions: jpietrzak8

MtRainier said:
I decided to verify if I was crazy, so I made a side-by-side comparison across the three OSs.
Click to expand...

Hmm. The blurriness is there, but it's more subtle than I'd thought. Hardware issues (at least in my experience) tend to be more striking.

I know you've said that this isn't just fonts, but could you try unchecking the "Use LCD Font Smoothing" option at the bottom of the "General" panel in the System Preferences, and see if that makes a difference? I'm wondering if OS X is trying too hard to interpolate pixels here...

Also, you could perhaps go to the "Displays" panel and try switching between "Default for display" and one of the "Scaled" options, and see if it makes a difference. Also, if you see a control for "Overscan" or "Underscan", you could try tweaking that (although hopefully that control won't be there, because if it is, OS X still thinks it is connected to a TV).

It's the video drivers and the monitor.
I ran into the same issue with that generation mini.

LG, Acer, view sonic, all looked fuzzy with OS X but just fine with Windows.
I gave up and ended up buying two 24 inch dell monitors to resolve the issue

I had the same issue a few days ago with a rMBP and a different Acer monitor (although this doesn't appear to limited to Acer monitors). My thread is below. Fishrrman gave my solution in post #7.

If it is the same problem (sounds like it is), your monitor has been identified as a TV and is being sent the wrong colour format. The solution changes that.

EDIT: I clicked on a link in the original post I missed before. You have seen this option. It is simpler than it looks. It took me a couple of minutes.
M

I've messed with LCD Font Smoothing--there's very little difference between it being on and off. The clock and other bolded text become... subtly more bolded when it's on, but that's about it. I don't think it's OS X, because, as seen in the screenshots--everything renders fine, except on my monitor. 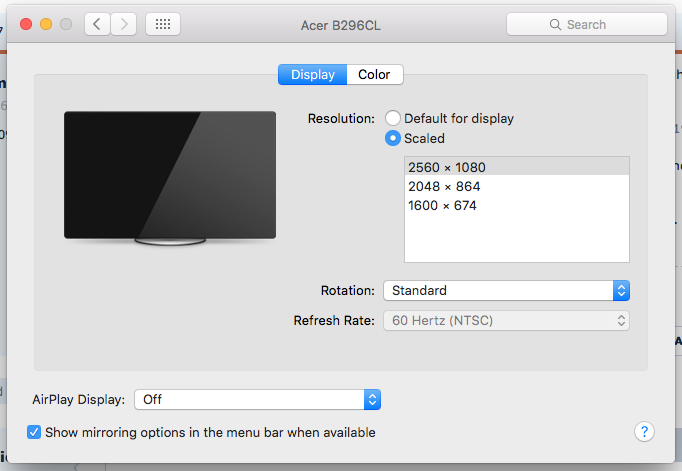 No TV options like overscan and underscan; 2560 x & "Default for display" are the same. I think OS X knows it's a monitor. 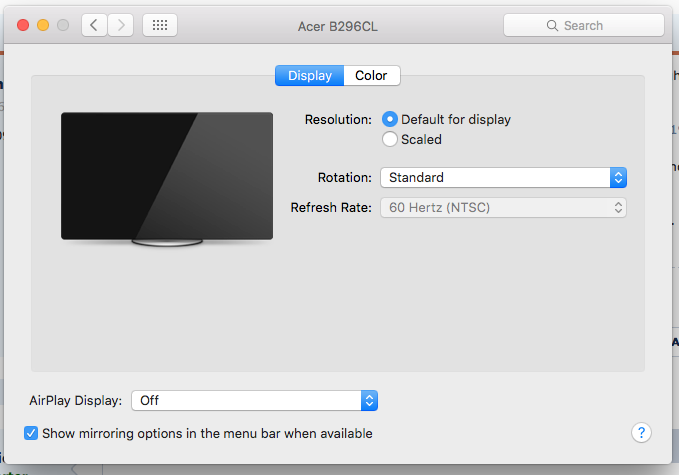 2048 and 1600 just stretch the screen. Coloring is fine. In retrospect, it might be the fonts, because the fonts on the screenshots I'm taking are nicer than the ones I'm typing and reading.

Is it true about the drivers, bruins? How'd you figure it out?
Reactions: jpietrzak8
J

MtRainier said:
How do I tell if my Mini's in RGB mode?
Click to expand...

Try Selecting About this Mac from the Apple Menu , clicking the System Report Button. Click on Graphics/Displays. 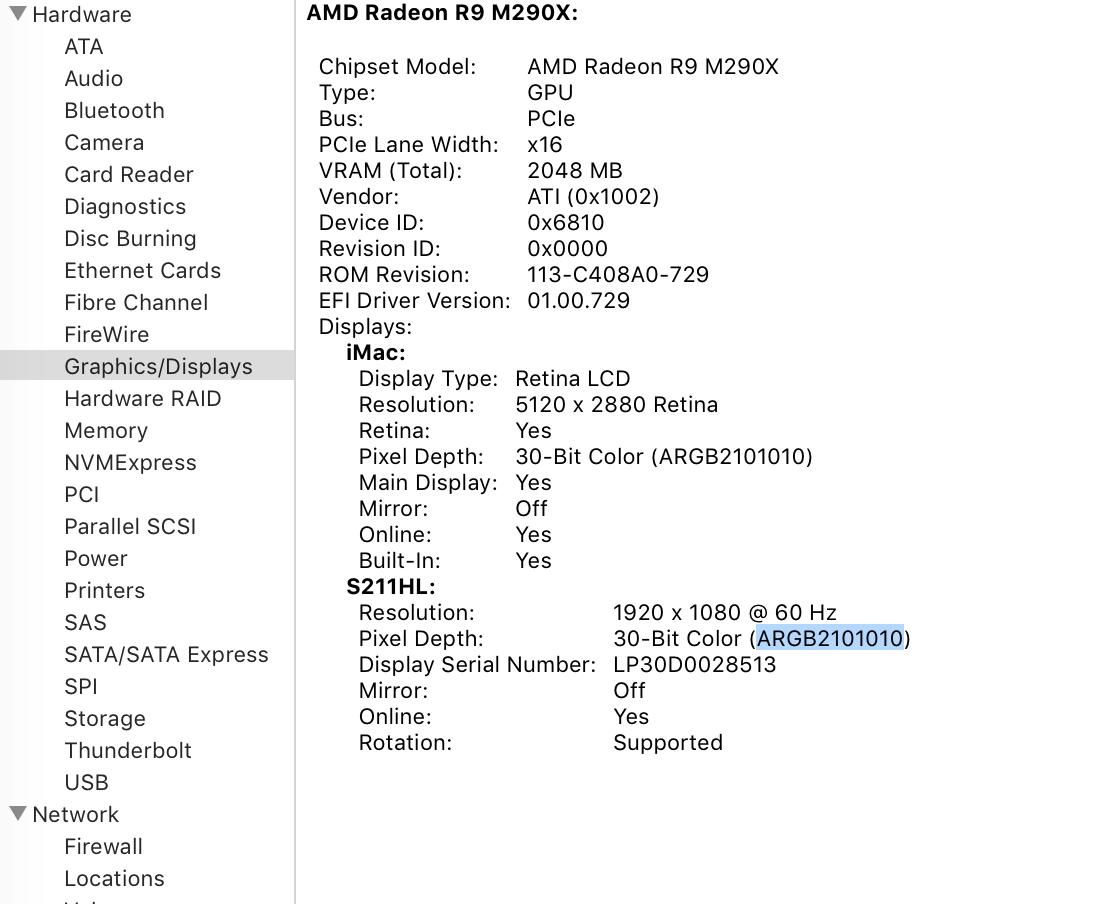 Look under pixel depth-- IIRC. it should read ARGB2101010 or ARGB8888. If it says something along the lines of YUV.... the problem will have identified itself.

edit: this is wrong. But there will be an additional attribute for displays identified as TVs. 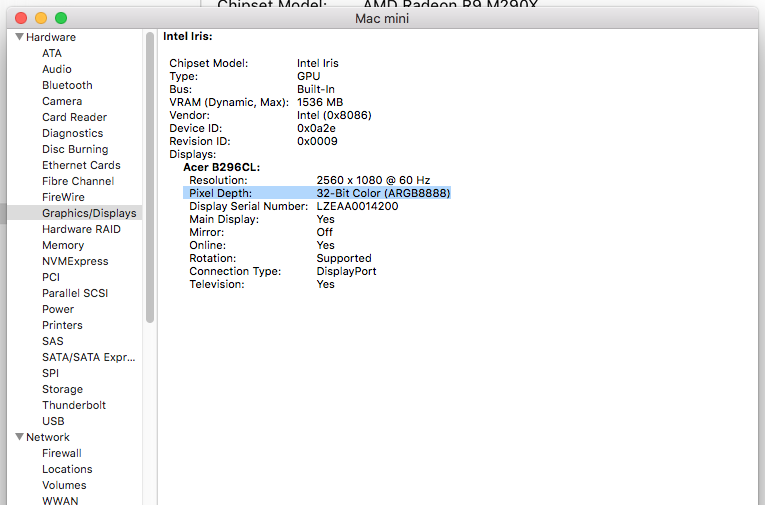 WAIT. IT THINKS IT'S A TELEVISION?
auauauhghggkrorarogh
You were right, Moonjumper. I'll try the script next.
Reactions: jpietrzak8
J


WAIT. IT THINKS IT'S A TELEVISION?
auauauhghggkrorarogh
You were right, Moonjumper. I'll try the script next.
Click to expand...

Ah Well... Sorry about that. But at least I pointed you in the right direction.
C

I chimed in on Moonjumper's thread with a solution that works - nevermind that it works? My displays are being shown as a television - IT DOESN'T MATTER. On my Late-2013 rMBP or my 2012 Mini Server, all show up as RGB on my Eizo, Dell, ASOS, and Acer displays (we have 53 of them...).
M

Wowwwww. That actually worked!! Why did that work?? So crisp. I feel like I could cut a steak with these fonts. Amazing.
Thanks, all of you.
Reactions: SpacemanSpiffed and jpietrzak8

Had this happen with my 2011 Mini and a Dell U3014 30" monitor - it was sending the signal in YCbCr color mode, which has block artifacts due a form of compression much like how JPEG images work. Did the Fix to force RGB mode and life was good.
H

MtRainier said:
Wowwwww. That actually worked!! Why did that work?? So crisp. I feel like I could cut a steak with these fonts. Amazing.
Thanks, all of you.
Click to expand...

That link is broken. Anybody still has it?

hajime said:
That link is broken. Anybody still has it?
Click to expand...