I recently purchased a Mac mini G4 (PowerMac 10,1) with 512MB/300GB, and have two Dell monitors with DVI connectors and cables.

Does anyone have any clue as to what is happening, and how I could solve this? 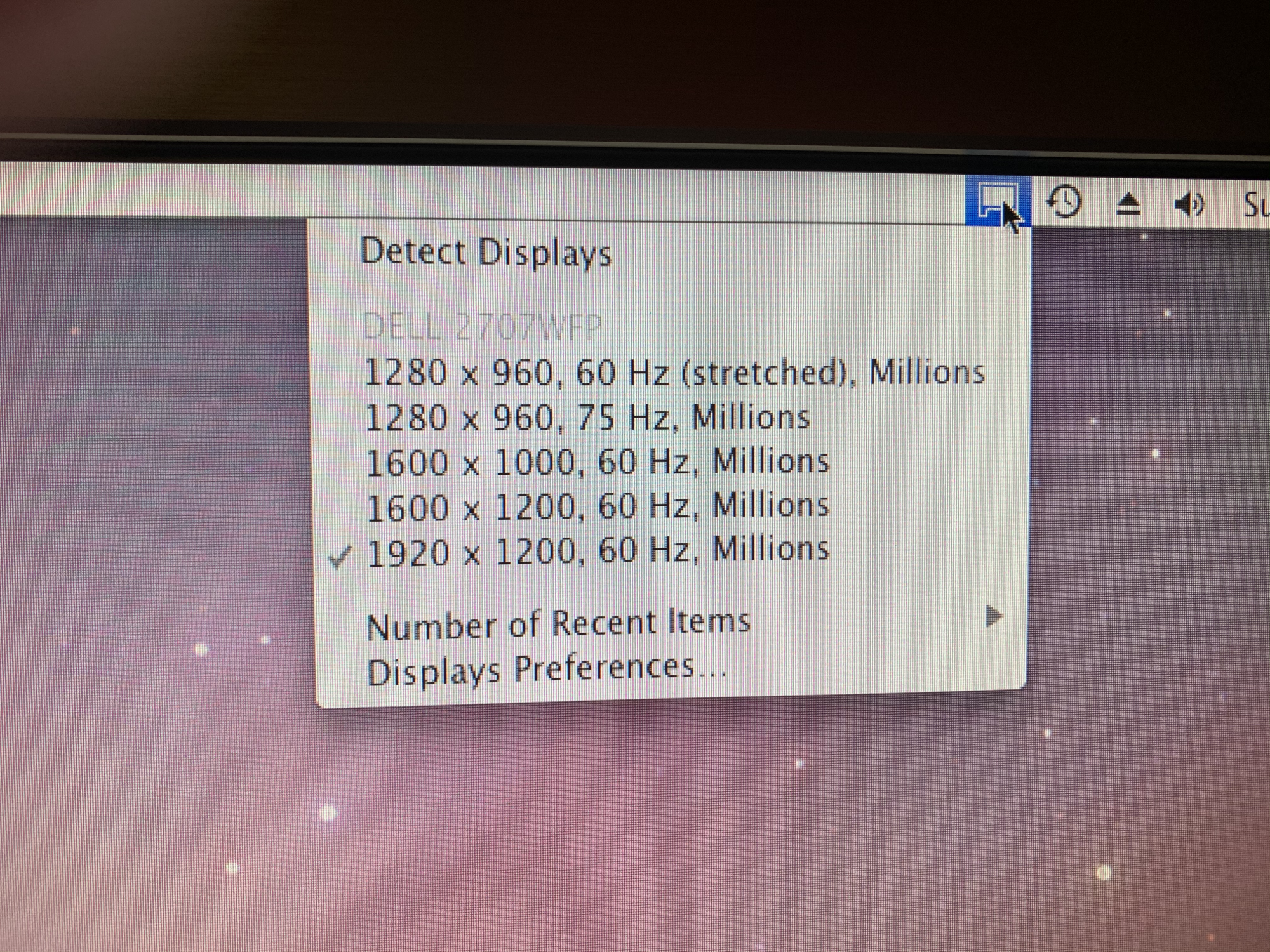 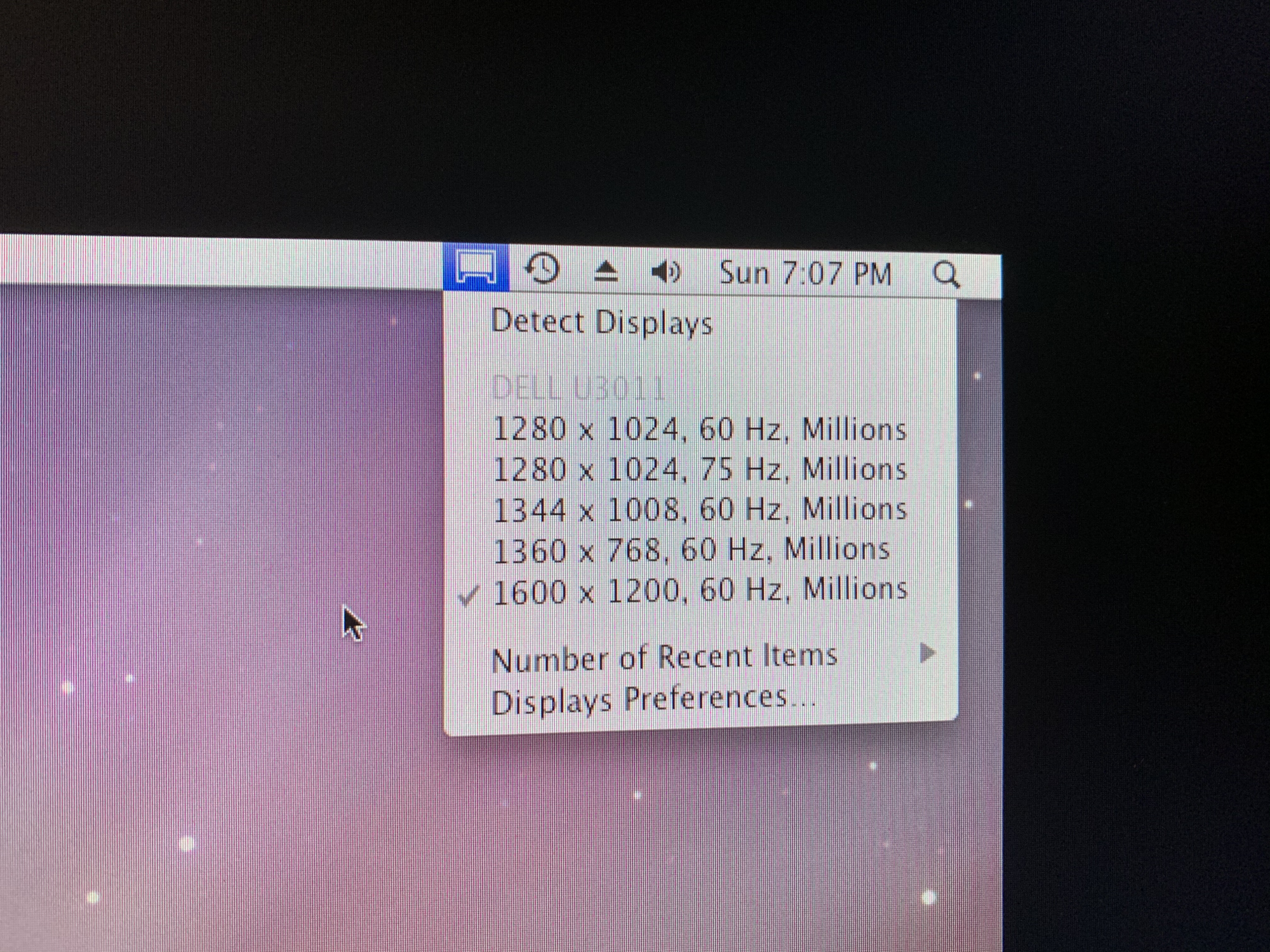 All MacMinis only have single-link DVI, so using a dual-link cable will do you no good.

As such it will fail to display anything beyond 1920x1200 unless you drop the refresh rate, which might not be supported by the monitor.

Another question would be if you are running a 1.25/1.33/1.42GHz Mini or the silent-upgrade at 1.5GHz which is the only one with 64MB VRAM (all others 32MB) which is said to fair somewhat better at higher resolutions.
Reactions: Amethyst1 and TheShortTimer

Thanks for your comment. My mini is the very first, 1.25GHz model, so 32MB Radeon it is.

I've played around in both the Mac's control panel, and the monitors', but cannot find any option that would help. I dug out the driver CD supplied with the U3011, but no Mac drivers are on it, and the Dell website doesn't, either.

FYI: The reason I'm asking is that I bought a new primary monitor and will thus sell the 2707, with the U3011 moving down to secondary on my Mac Pro.

CocoaNut said:
My question is not about the mini itself, rather than the reason why a more modern monitor (2011) does not enable the 16:10 resolution,
Click to expand...

So... I've done some testing (after I rebuilt my studio/office 😁), and I've seen that:

= The monitor CAN display Full-HD resolution through a single-link DVI cable.

The way I see it, at this point, is that there is some "error" in Apple's OS, or a misconfiguration, perhaps.

How does Mac OS store configuration files? Could I perhaps edit something to enable this Full HD resolution when it comes in through a single-link DVI cable?

CocoaNut said:
How does Mac OS store configuration files? Could I perhaps edit something to enable this Full HD resolution when it comes in through a single-link DVI cable?
Click to expand...

You could give SwitchResX a try.


SwitchResX - The Most Versatile Tool For Controlling Screen Resolutions On Your Mac
Reactions: CocoaNut and 1042686

Amethyst1 said:
You could give SwitchResX a try.
Click to expand...

I would have never thought that the monitor's technical specs would come to play a role in this, but it appears that the Mac mini's ATi graphics card carries the weight here.

From what I've learned through your suggestion, apparently, the GPU can only push a 135MHz pixel rate, which is below what the U3011 monitor needs for FullHD resolution. I've played around in the app a bit and was only once able to get the wide resolution displayed, albeit with a lower refresh rate. While trying to tweak the settings some more, I managed to mangle them enough to get a black screen. I'm now reinstalling Tiger... Oh, well. 😅

I used to play around with pixel clock, horizontal, and vertical refresh settings "in the old days" with CRT monitors (on PCs) but didn't think that these would still play a role with digital connections! One more lesson learned!

CocoaNut said:
From what I've learned through your suggestion, apparently, the GPU can only push a 135MHz pixel rate, which is below what the U3011 monitor needs for FullHD resolution.
Click to expand...

If your display is "coherent" (whatever that means) the G4 mini will actually do 154MHz.

Amethyst1 said:
If your display is "coherent" (whatever that means) the G4 mini will actually do 154MHz.

I do!
Reactions: CocoaNut and Amethyst1 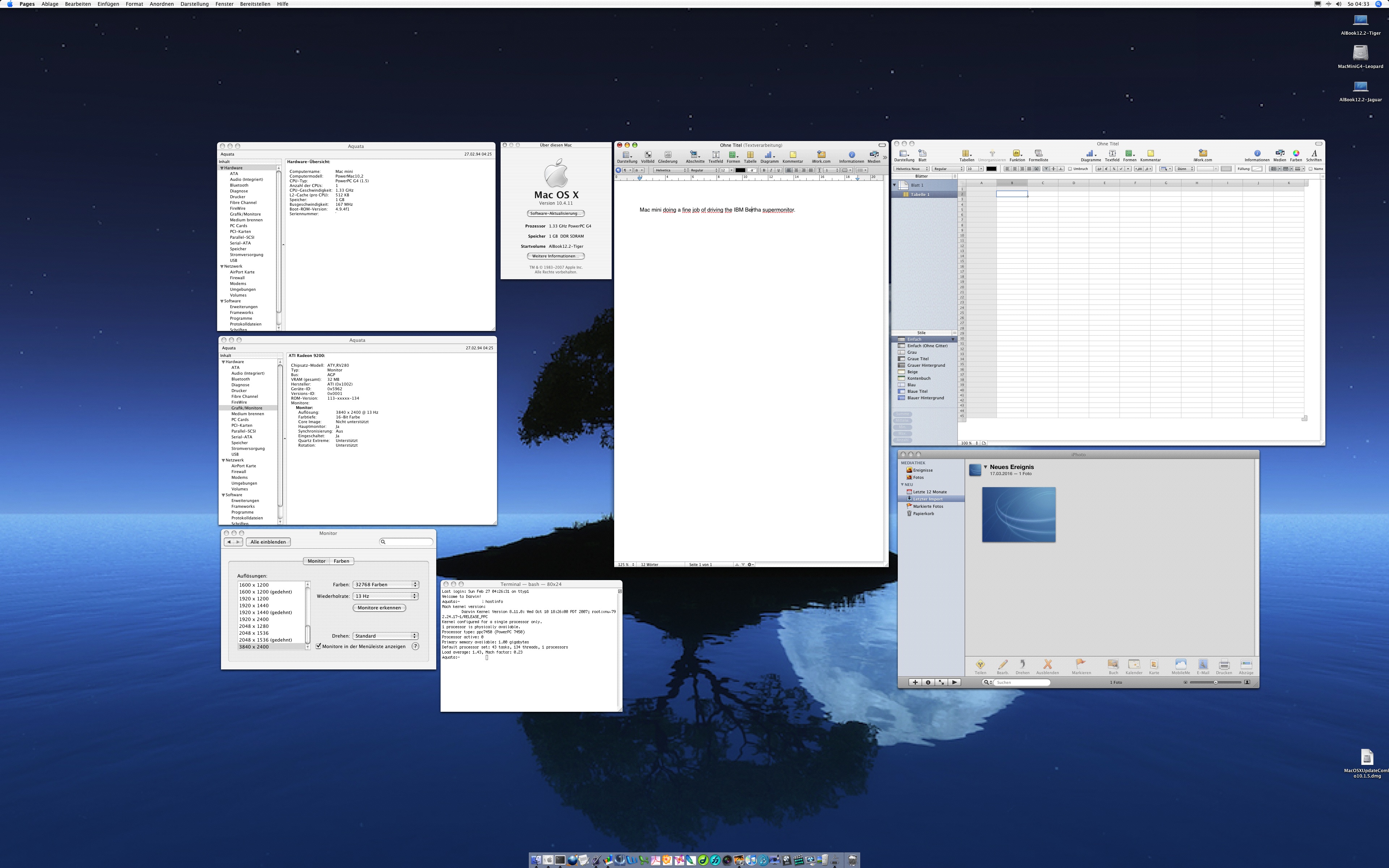 I just bought another mini G4, this time @1.42GHz, with Bluetooth, WiFi, and a Superdrive. I will need a couple of days to play around with it as time allows, and will definitely try your suggestion!

However, my goal is not to get the highest resolution possible out of the Mac, rather than a "historically correct" one (and with the wide aspect ratio), though I will try to see if I manage to get to 2560 now that you mention it. I like the pixelated look of old OSs, while I enjoy 4K on my main machine, a Mac Pro 5,1.
Reactions: Amethyst1

CocoaNut said:
However, my goal is not to get the highest resolution possible out of the Mac, rather than a "historically correct" one (and with the wide aspect ratio),
Click to expand...

Yeah... I guess I will run more of the mainstream stuff and resort to 1200p resolution... IF I CAN GET IT!

It turns out, the Mac mini G4 I bought is actually a PowerMac10,2, meaning a silent upgrade @1.5GHz! I'm pleased about this, but there IS a problem.

I swapped the 300GB HDD from my other mini G4, and all is well. But when I boot the Mac, in either Tiger or Ross's Mac OS 9 CD, the display becomes crap, i.e., both my Dell monitors only show half of the horizontal resolution.

I can install Tiger blindly and eventually set the resolution to 1368x768, which is workable. But any cold boot will halve the horizontal resolution and make the display unreadable. I even brought out the 2707 monitor to see if it would allow me to get the installation done, but it shows the exact same problem. 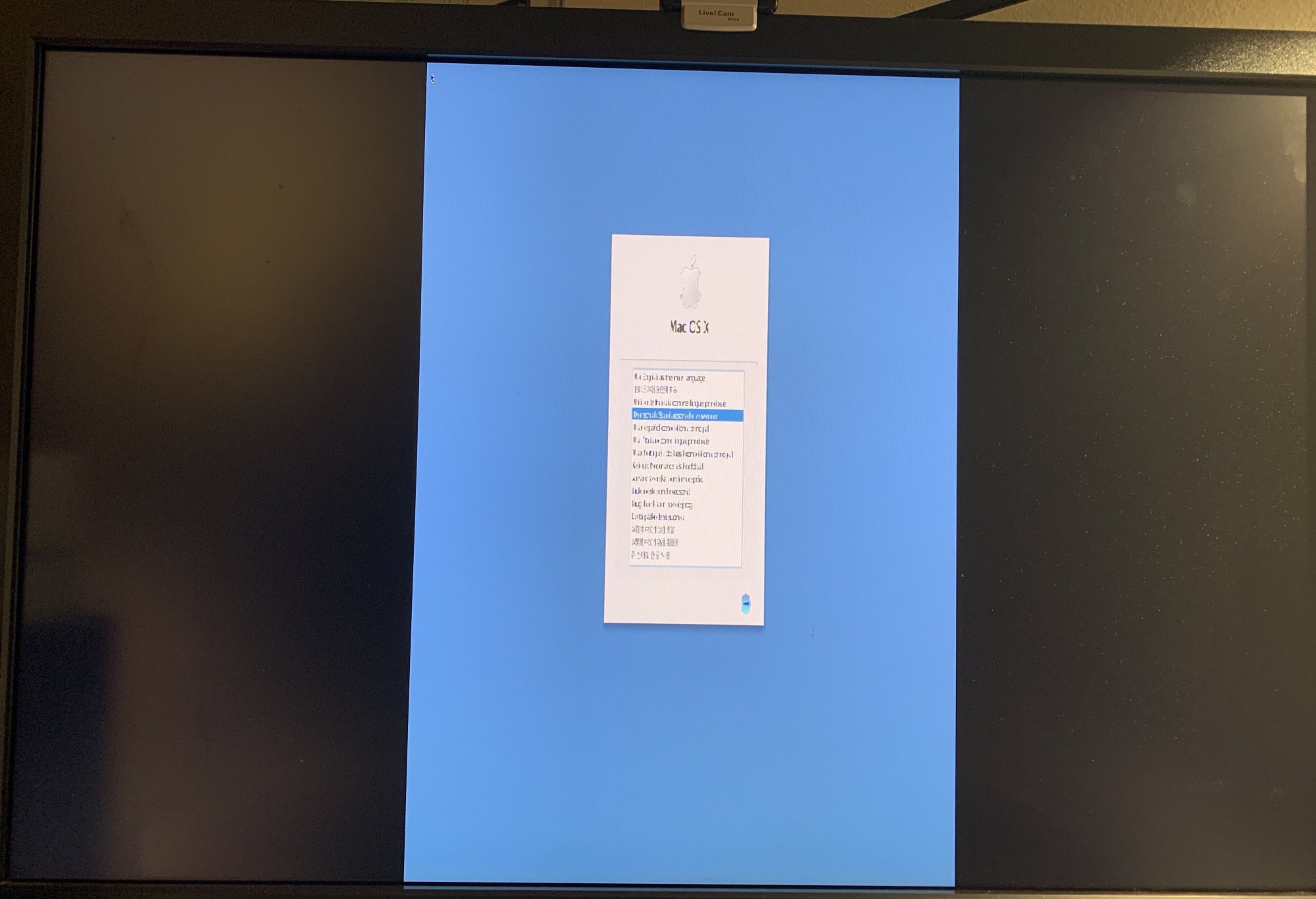 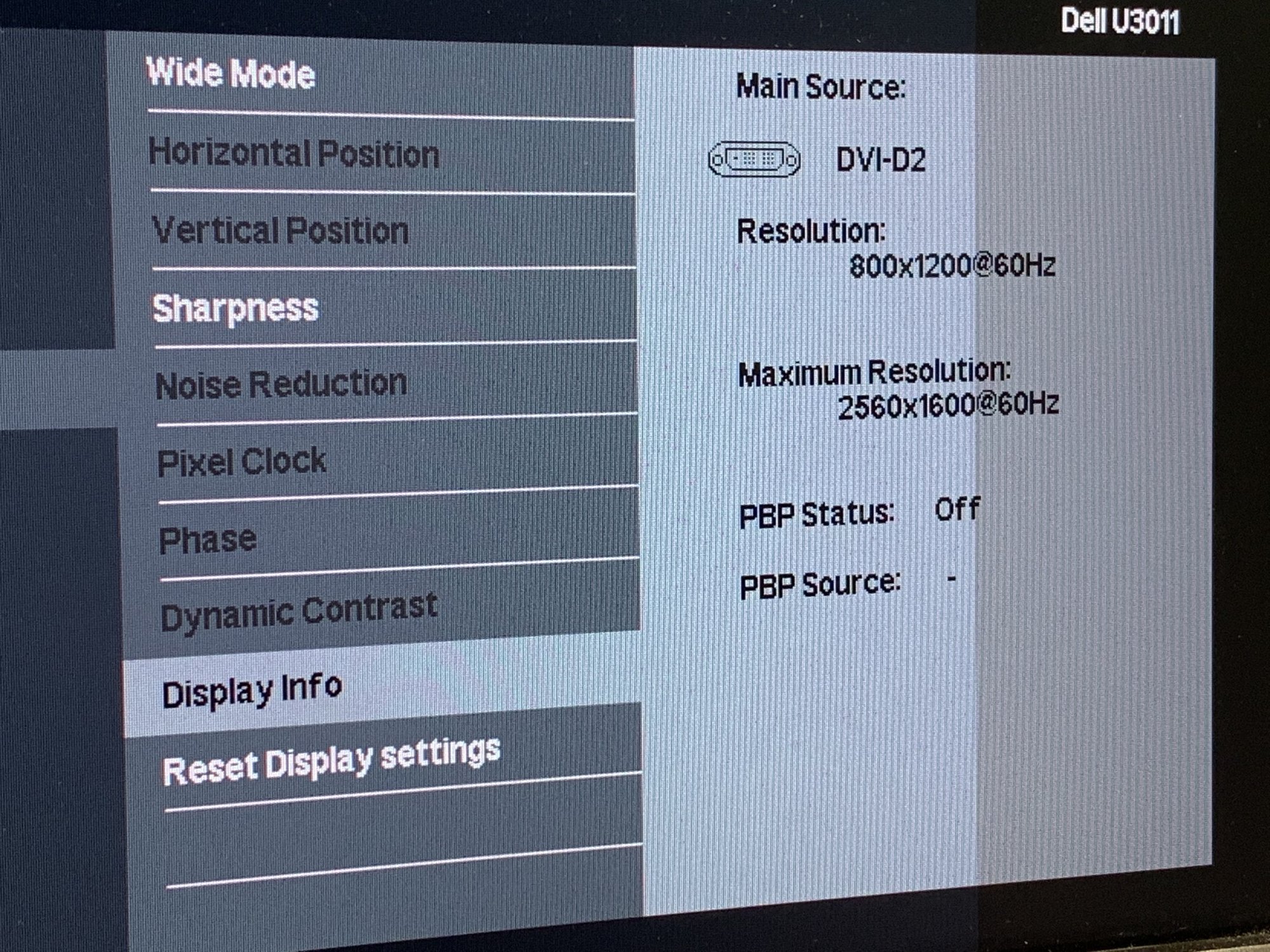 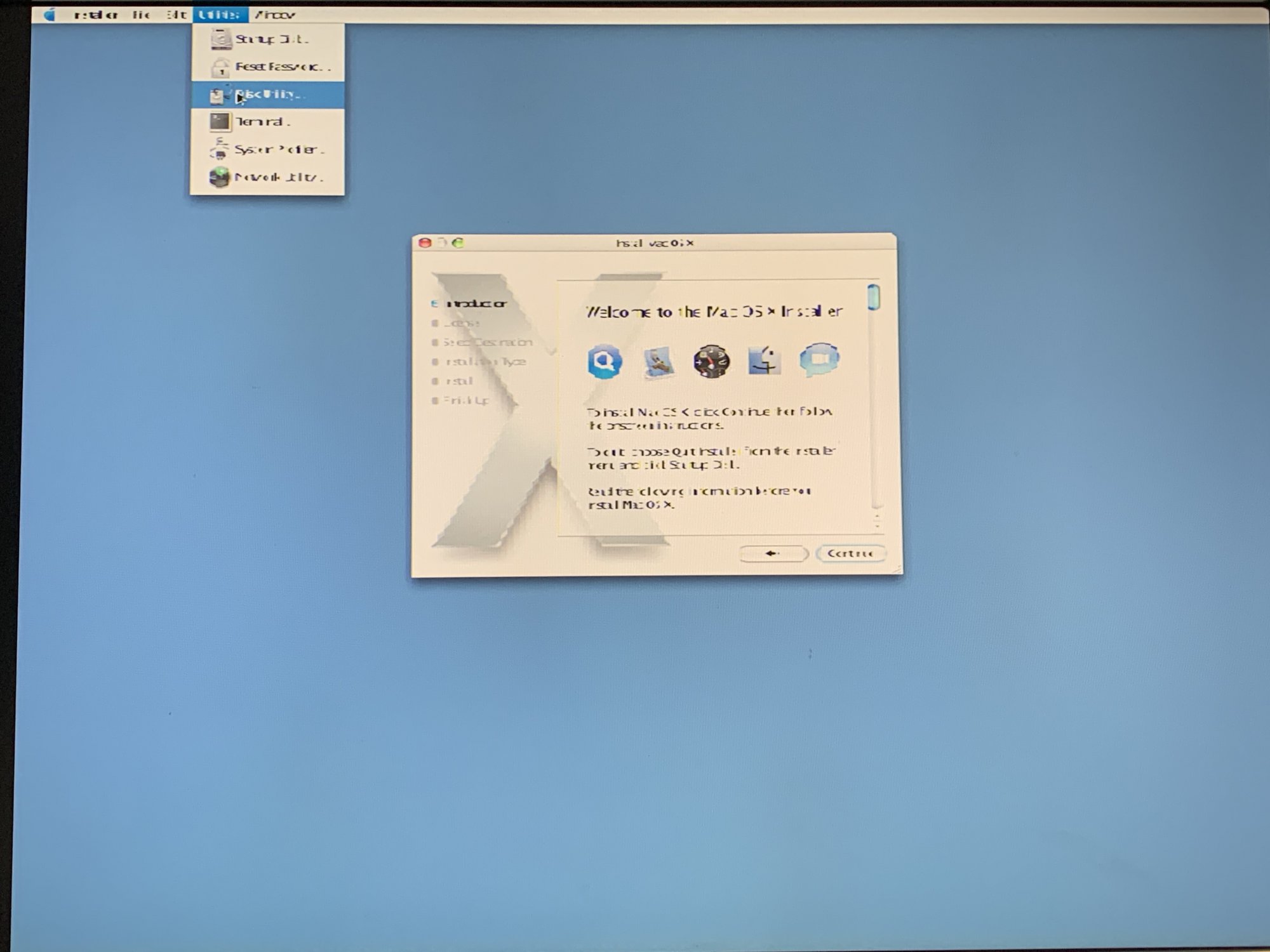 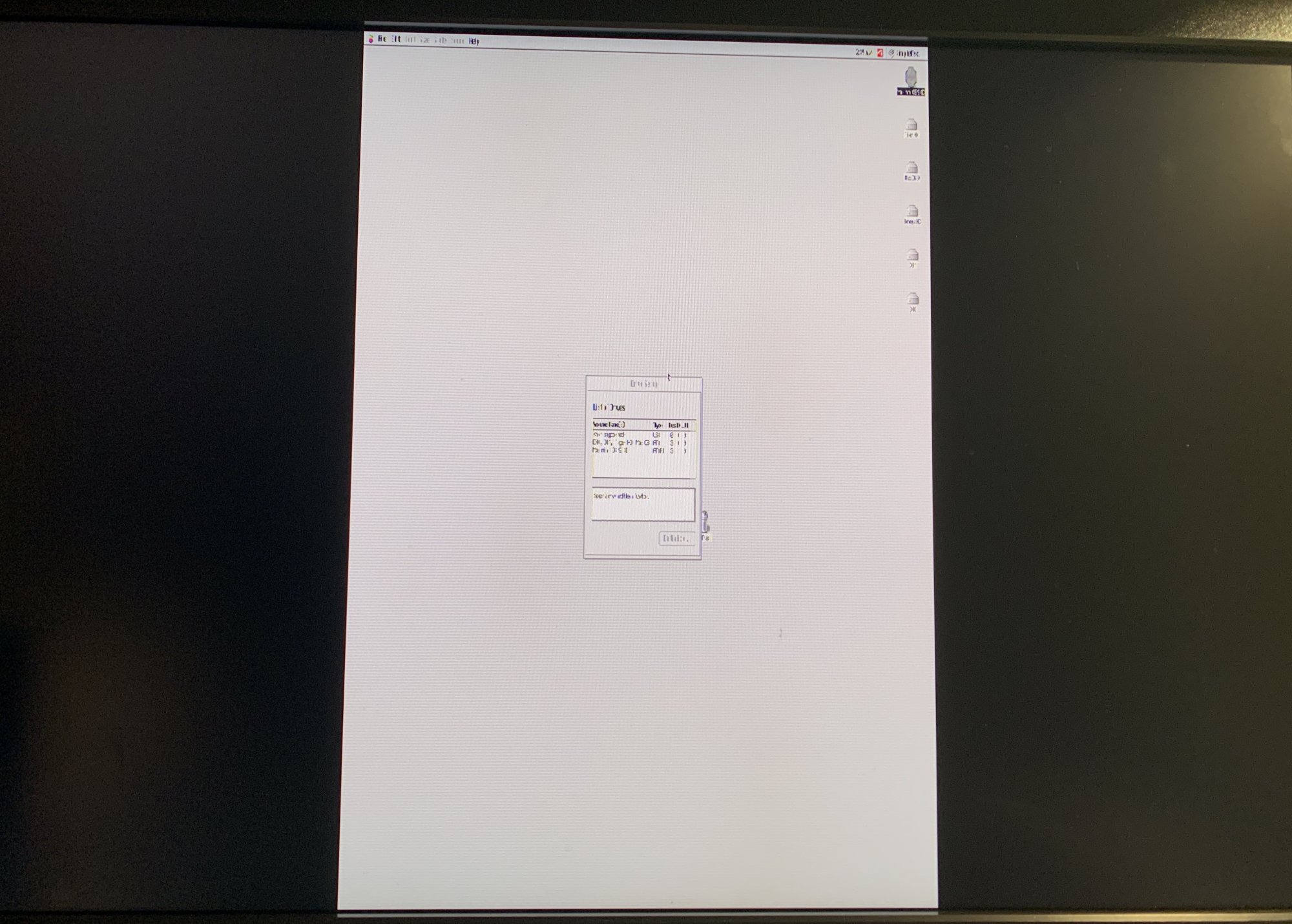 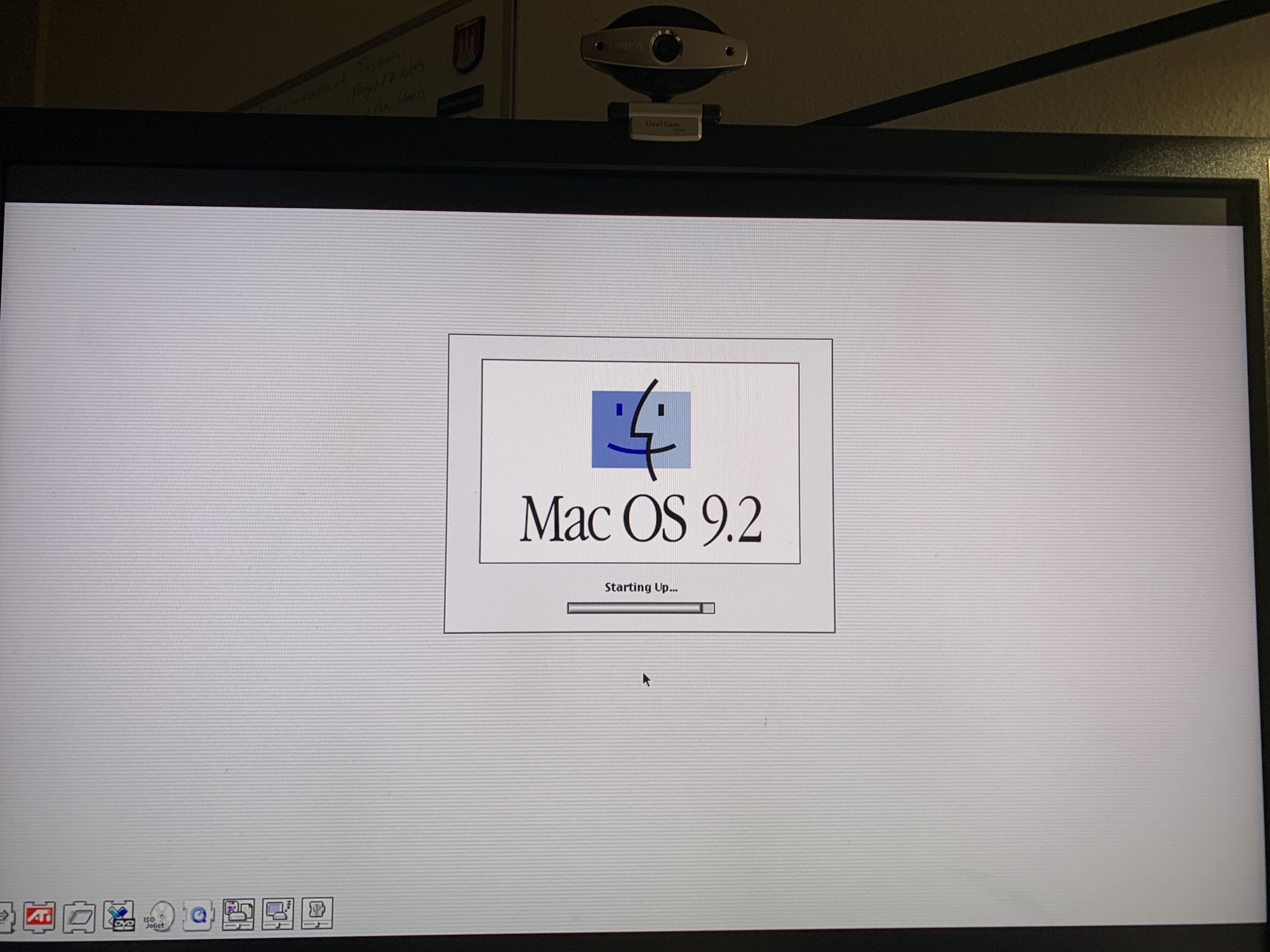 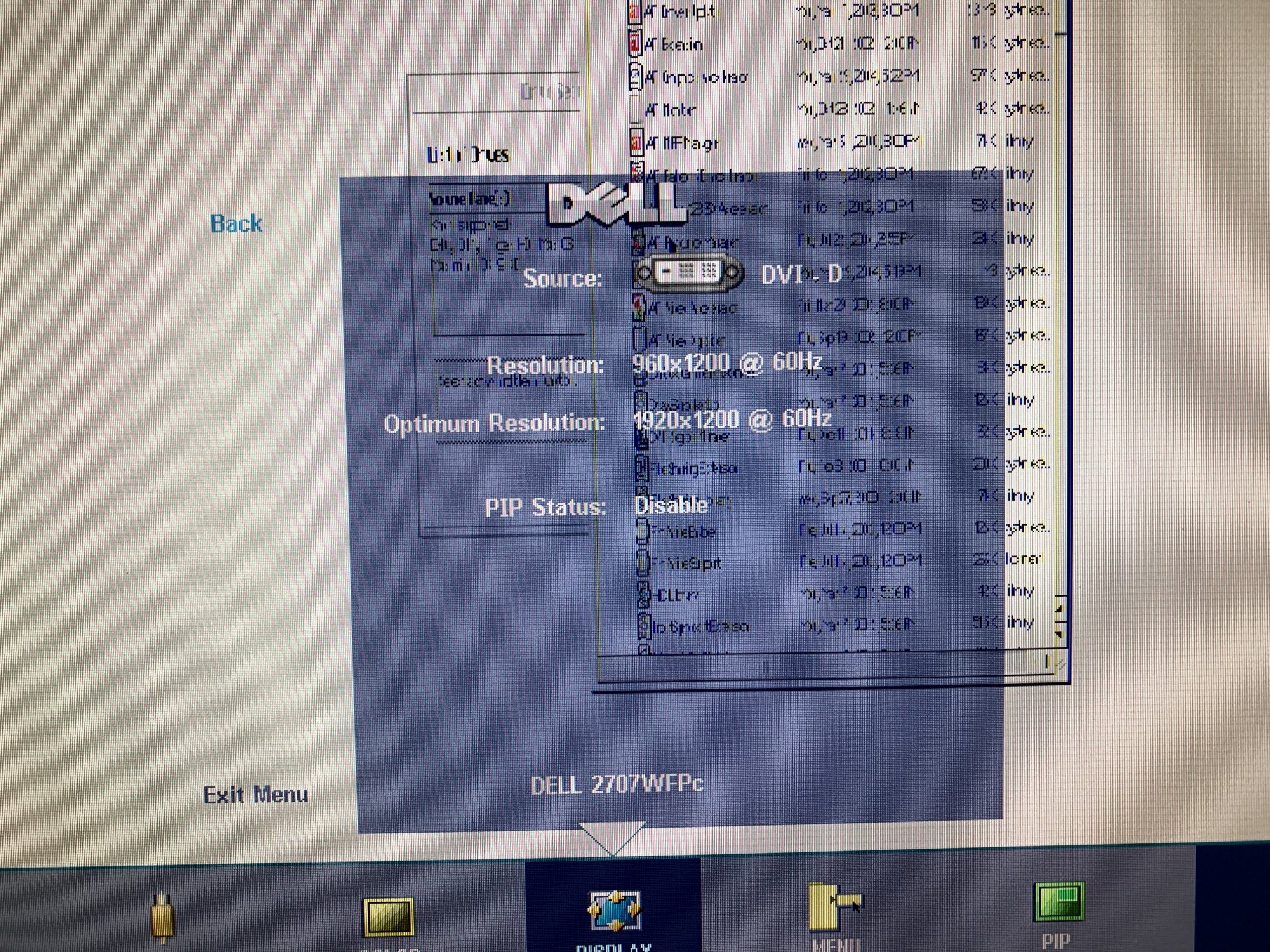 Somehow, at one point it seems to boot fine (see screenshot), but when you need to decide something such as where to install the OS, the screen becomes unreadable. I can't seem to be able to install any external app to fix things, so this issue must be related to the Mac itself, but where?

Mine does the same with the IBM Bertha. The screen is garbled during boot-up but fine once the OS X GUI loads. And on OS 9, I can only get half the horizontal resolution.
Reactions: CocoaNut

I asked the previous owner about this, and he's had no issues, though he used an HDMI adapter, while I am using a DVI-DVI cable. I'll have to get another cable and see if anything changes.
Reactions: Amethyst1

I've yet to try on my second mini G4, the silent-update 1.5GHz one. The 320GB HDD in that one is just screaming for OS9, Tiger, and MorphOS, but I need to find a guide on how to install the lot without them stepping on each other's feet. But that is a task for another day.
Reactions: Amethyst1

CocoaNut said:
The 320GB HDD in that one is just screaming for OS9, Tiger, and MorphOS, but I need to find a guide on how to install the lot without them stepping on each other's feet. But that is a task for another day.
Click to expand...

Bug-Creator said:
No idea bout No.9 but:

Yes, I already have that guide and read it, and it won't get me too far, apparently.

OS9 and MorphOS don't seem to get along well in a dual-boot scenario, mainly because of OS 9, which was not designed to coexist with anything else. The MorphOS developers have already stated that they don't plan on working out this issue, though I still have my hopes up that there will be a solution for this someday.

Somewhere in all the pages I consulted to better understand what could be causing the half-resolution problem, I found that, while the Radeon 9200 graphics chip has the same architecture in all models, there are subtle differences, which would explain why a 1.25GHz model doesn't have issues, while a 1.33GHz model does (or vice-versa).