Mac Mini with a rather pretty face

Two years ago I acquired a late 2009 Mac Mini which had Yosemite installed. Performance was ok with 4Gb memory, but despite being a neat, reasonably priced desktop computer, I always thought the Mini range looked somewhat uninspiring.

Being a long-time avid fan and collector of PPC Mac's, I thought I'd try and shoe-horn the Mini into the case of a 2000/2001 'Cube'.
For those who may not know, the PowerMac G4 Cube was a commercial failure, but few can deny that it's design was innovative, which earned it a place in the New York Museum of Modern Art, where an example is still displayed to this day. I have both the 450 and 500MHz models, which whilst reasonable performers in their day, are somewhat of a challege now in 2020 for internet use, although they're good fun when one installs an up-to-date web browser (TenFourFox FPR26) and perform a number of tweeks to enhance the performance.

I achieved what I originally set out to do - install the 2,26GHz Mini inside the Cube casing. But the last thing I'd do is 'butcher' a G4 Cube as they're now very collectable, so the innards were lifted out, (a 5 second task) and a few minor components inside carefully removed and retained in a safe place together with their fittings. If and when necessary the Cube can be easily restored to it's former vintage, collectable glory.
Here's a screen shot from the MacMini at that time: 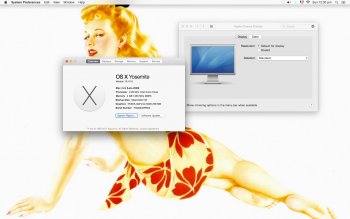 As already mentioned Yosemite was ok, but recently I'd been motivated to bring the 'CubeMini' really up to date.
So rather than just updating the OS, I decided to refurbish the 11 year old MacMini, and this was performed by complete dissassembly and the following:
i) Cleaning and re-paste of the cpu.
ii) Clean and re-lube of the fan.
iii) Replacing the Hitachi 'spinner' HD with a Crucial SSD.
iv) Upgrading RAM memory with x2 new 4GB sticks.
v) Upgrade to OS 10.14.6 'Mojave' using the dosdude1 patch.
vi) Install a modern, safe web browser that I was comfortable with, namely FireFox 80 (finely tuned with the foxPEP patch for snappier performance), and DuckDuckGo as the more private search engine of choice.

I can truly say that the end result certainly exceeded my expectations. 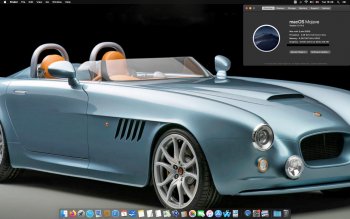 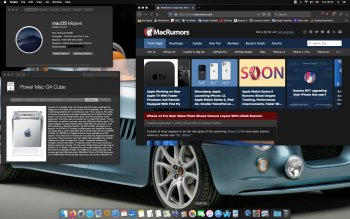 For all those who may have already written off some of the later Intel Core2Duo cpu's as well past their prime, I'll just simply say - "Think again!" This MacMini3,1 in it's current configuration and with the facelift as shown below is a young wolf in an old sheep's clothing. 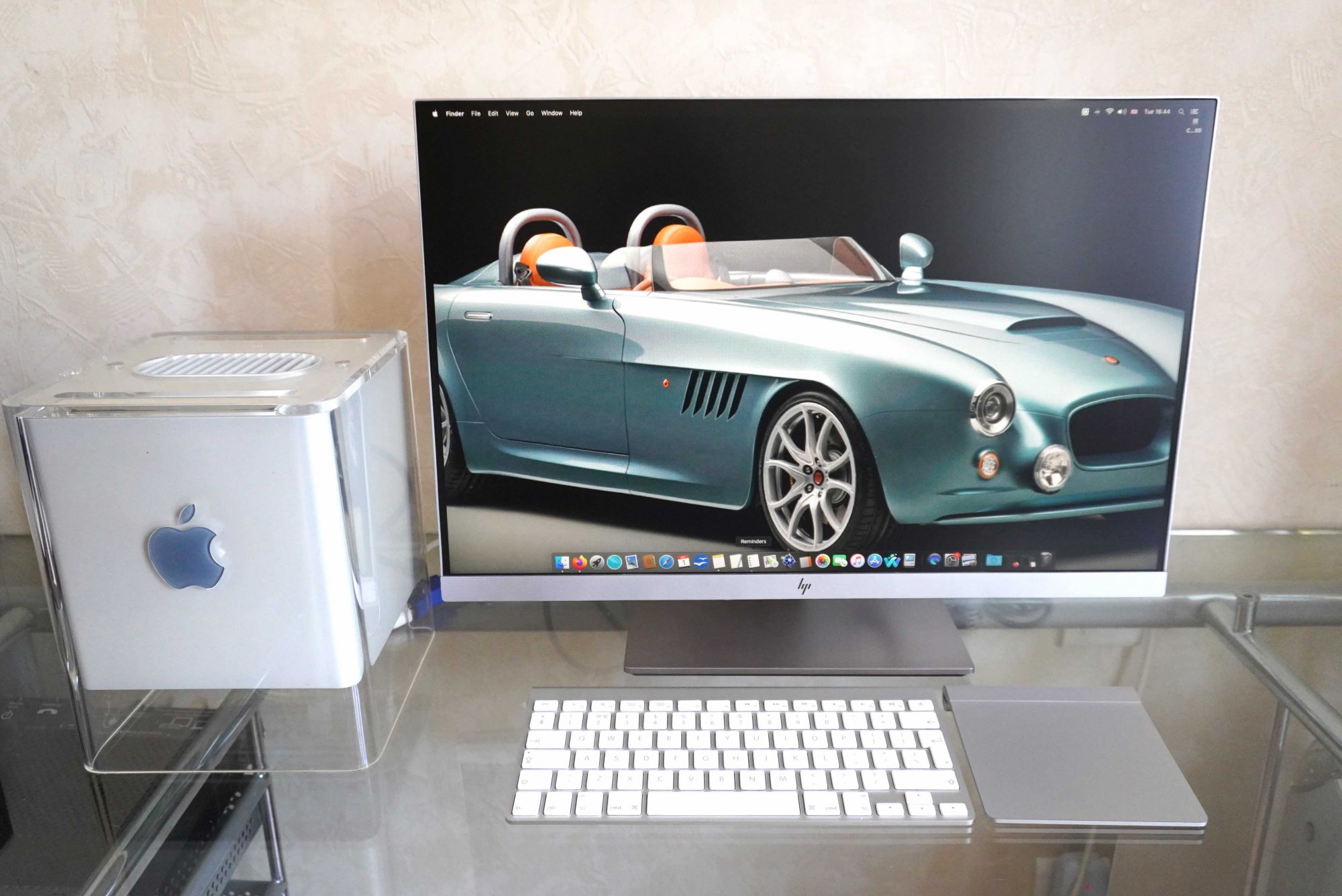 Great shame that the larger profile Core i5 Mini's can't be shoe-horned inside a similar casing. Stripped down to individual components it may work, but imho would be 'messy'.
Reactions: Project Alice, iGobbleoff, Kamolas and 9 others

CooperBox said:
or all those who may have already written off some of the later Intel Core2Duo cpu's as well past their prime, I'll just simply say - "Think again!"
Click to expand...

@CooperBox - What’s the car in the wallpaper?
K

steve217 said:
@CooperBox - What’s the car in the wallpaper?
Click to expand...

The car is the Bristol Bullet (named after a 1920's British biplane racing aircraft).
Bristol cars were luxury vehicles, hand built by aircraft specialists at Filton, Bristol, England.
No fewer than 22 models were produced between 1946 and 2016, with the company going into liquidation earlier this year.
The Bullet prototype is reported to be powered by a normally aspirated 370bhp 4.8 litre BMW V8 engine driving the rear wheels. Body is carbon fibre. This was the last car to be manufactured by Bristol, and apart from the prototype it is uncertain if any production vehicles were completed and actually delivered to customers.
There are a few interesting videos posted of this unique car, i.e. a search for 'UK Bristol Bullet' and 'Bristol Bullet Motorchase' is worth a visit.
Reactions: steve217

WOW excellent job on this project. I certainly remember the Mac Cube. It was years ahead of it's time. Basically the precursor to the Mac Mini. I currently have a 2009 2.53 GHz Intel Core 2 Duo Mac Mini. It's running Mac OS 10.6.8. I have older programs that I didn't want to not work in a newer Mac OS. I'll be getting a new Mac mini soon.

What HP monitor are you using?

crowe-t said:
WOW excellent job on this project. I certainly remember the Mac Cube. It was years ahead of it's time. Basically the precursor to the Mac Mini.
Click to expand...

Yeah, it was years ahead, yet they somehow forgot to test the cooling aspect of that useless beauty.

One of our professors had one of these in the middle schools graphic department (Szombathely, Hungary) and the case had visible cracks. And was hot as... It was simply bad idea, that they didn't include a cooler.

opeter said:
Yeah, it was years ahead, yet they somehow forgot to test the cooling aspect of that useless beauty.

One of our professors had one of these in the middle schools graphic department (Szombathely, Hungary) and the case had visible cracks. And was hot as... It was simply bad idea, that they didn't include a cooler.
Click to expand...

Sorry, have to disagree about the original Cube requiring a 'cooler'.
Yes indeed, there were defects/omissions with the G4 Cube but in my long-term experience with them, the convection based cooling was more than adequate for the cpu and gpu. I still have functioning G4 Cubes and never had a system crash or throttling due to overheating. To prove the point, the 2nd functioning Cube I purchased was in use as a server, functioning 7/7 and the owner had a pile of books on top, half covering the convection cooling outlet! It has never missed a beat and is still in fairly regular use.
Obviously if one installs an uprated cpu, a fan is a must. One of mine has an aftermarket 1.2GHz cpu (upgraded from the base 450MHz), and had a fan installed when I bought it. It emits a light blue glow, and is super-quiet.
As for the 'cracks' in the body of the Cube at the time of launch, time appears to have confirmed that these are stress-relief related, following the injection moulding of the polycarbonate plastic. All G4 Cubes I've seen display this, but it's very minor indeed, and imho doesn't significantly detract from the stunning, stylish design.

Can you post some pics of how you tackled the innards, no matter how grizzly?

I’m pretty sure dosdude soldered one in his. I can’t remember if I saw that on here or FB. He did it with a MacBook 5,2 also.
You must log in or register to reply here.
Share:
Facebook Twitter Reddit Email Share Link
Register on MacRumors! This sidebar will go away, and you'll see fewer ads.
Sign Up
Top Bottom