Has anyone with a Mac Pro 2013 with the latest firmware update notice changes with the performance and/or heating issues?

I have noticed that the fans are now VERY quiet and if the fans come on when rendering with FCPX, it is still quiet and not as much heat coming out from the top as before. Not sure if it is rendering faster or not. I ran a benchmark with Geekbench 4 and looks ok (normal)...but cannot tell with realtime application.

Did Apple clock down the CPU or do anything regarding performance or the graphics cards with the latest firmware update? I would not mind faster rendering with a little more heat if the CPU is working to render faster...but could the CPU maybe (rendering) is slower now after the firmware update? I am using macOS Mojave.

Or...(hopefully) Apple FINALLY after almost 7 years figured out the overheating issues with either the CPU or the dual Graphics cards...?

I replaced the stock SSD with an updated OWC NVMe 1TB and OWC states that the SSD is suppose to run cooler...(could that be the reason - two much of a difference)?

FYI - I did blow out some dust that accumulated under the top fan...but just that would make a drastic difference?

Not complaining (actually happy), but any thoughts (or someone may know)? Thanks!

- How much RPM does this app report when rendering FCPX? Screenshot would be great.
- Have you ever replace the stock thermal paste?

crystalidea said:
- How much RPM does this app report when rendering FCPX? Screenshot would be great.
- Have you ever replace the stock thermal paste?
Click to expand...

No I have not changed the thermal paste (bought the system in 2016 so would not think it was needed yet) and did not have any issues as others had prior with the system (I bought it refurbished from Apple and it was assembled in Feb 2016 and bought it June 2016...before the reduced price. :| ). It did not have the updated NVMe SSD). Currently 6-Core with D500 graphic cards and 64 GB of RAM. I will be updating the CPU to a 12-Core sometime next month so I will be adding new thermal paste then.

I would prefer not installing the fan control program since everything is running ok and do not want to take a chance with any programs messing up the fan controls. Is there any other way to check besides installing a fan modifier app like activity monitor or something?

the mentioned app doesn't change anything unless you want it. You may simply run it to diagnose fan/temperatures, example attached.

Ok, have a project to finish today and after will install your app and will get a screenshot for review and post.

Not an issue, just noticed that something has changed for the better, but wanting to see if anyone else noticed? Runs cooler, fans do not come on (barely) even when rendering, but when it does very quiet.

Not complaining, just want to know if Apple thermal down the CPU performance, especially in FCPX. I cannot compare because I came back to using the mac pro 2013 for FCPX (been using macbook pro 2018 i9-much faster) and cannot tell if the mac pro 2013 is slower or faster then before in rendering video with the oven heat and increased fan I use to get when I used it. I have not changed my workflow, but noticed the change for the better.

Using macOS Mojave. Again, like the change but hopefully not a slowdown in performance.
W

I'm guessing that the return to the OEM SSD allowed the Catalina installer to update the Boot ROM Version to 133.0.0.0.0 during the install, as I noted the new Boot ROM version immediately following the installation. Unfortunately, I also noted that the nMP began to run quite hot at that same time. Reverted back to the Mojave SSD, and it still ran way too hot. Pretty sure Apple changed/lost their nMP fan thermal curves in Boot ROM 133.0.0.0.0.

The higher temperatures don't seem to be related to dust (none), thermal paste (new from Apple last year), SMC/NVRAM (multiple resets), or the OS version (Mojave or Catalina).

So I bought/installed "TG Pro", noted that the "PCIe Switch Diode" was now hitting around 79/80C at idle, with the fan happily doing nothing about it as it was only turning at the minimum speed of 768rpm.

Configured TG Pro to use "Auto Boost" mode, triggering my custom thermal/RPM "curve" to keep the Diode at a cooler 73C with a RPM of ~850. I'm not sure the temp is all from that PCIe Diode, but I am sure that the extra ~100rpm has dropped the temps across the board. Great tool, took me a wee bit of time to dial in the optimal "Auto Boost" curve, but time well spent.

Hope Apple can be bothered to find & update the nMP's Boot ROM thermal curves before all these workhorses burn up with Catalina/133.0.0.0.0!

Had a the opposite reaction. It's running cooler with 133.0.0.0.0. Will post the screen shot of what is happening with from the Mac fan control app. Maybe crystalidea has an answer. Looks like the Mac Pro 2013 is doing what is should regarding regulating the heat...
[automerge]1578981296[/automerge]
Here are the screen shots...one shot running idle with only mail and a few programs open and not doing really anything.

The other, rendering optimized and proxy media at the same time.

Screenshots look good, but CPU temp is relatively high. My CPU reaches 80C after 10min Handbrake encoding and the fan is still rotating at min speed, same firmware but I have a replaced CPU and unknown fan problem

I ran Apple Hardware Diagnostics Test and everything checked out ok. Even noticed the fan test and it seemed ok. Heard the fan go on at a low speed and then it increased more (but did not go full blast).

I guess I will just have to see how things goes. I had noticed at times FCPX renders fast and then sometimes it takes more time. Not sure why, but overall the Mac Pro 2013 is running cooler. I do notice the fans on occasion, but they are very silent in compares to before.

I bought a 12-Core CPU from Newegg and will take the plunged to try to replace my 6-Core later in February (I am working out-of-the U.S. and will pick up the CPU in a few weeks). Hoping I will notice a big difference with FCPX after.

"PCIe Switch Diode" was now hitting around 79/80C at idle
Click to expand...

It's very hot. Mine is about 60C, same firmware

Seems like there is a new firmware update in the newest Catalina beta. Anyone install it and see if there are any changes?

crystalidea said:
It's very hot. Mine is about 60C, same firmware
Click to expand... 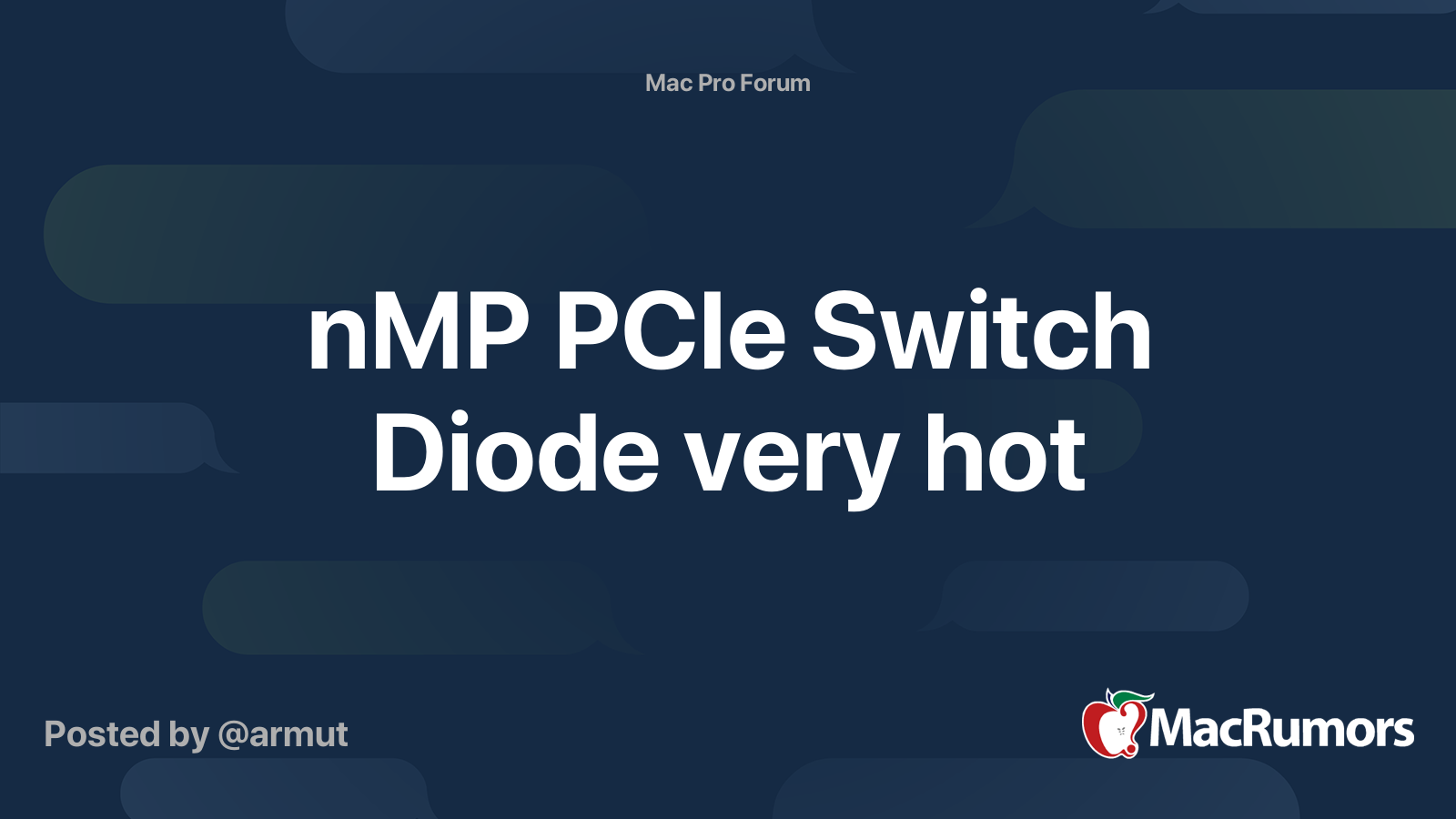 Hello people, I have a problem with my nMP. I recognized via iStat Menus that my PCIe Switch Diode is getting very hot. To lower this I did NVRAM- and PRAM-Reset but nothing changed. Do you know how to fix this or what the problem is? Thanks...

This may be the sledgehammer approach instead of the scalpel, but I just use mac fan control so the fan runs constantly at 1750rpm, and I never see any temp go over 52C/125F. The fan is large and contributes to some white noise, but I actually like that. It's nowhere near as annoying as, say, a MBP's fan spinning up and down constantly. And far cheaper to replace than proprietary video cards.
Reactions: R2FX

Has anyone else noticed any changes besides a revised startup chime with BootROM 423.0.0.0.0?

I notice cooler temps across the board, but same responses with rendering in FCPX. I cannot decided what is best for editing and rendering, either macOS Mojave or just going with macOS Big Sur. Noticed still throttling with both CPU and GPU, but not consistent real world testing results on video to see to stay on macOS Big Sur. Sometimes it renders faster, sometimes it throttles. MacOS Mojave uses both CPU and GPU at full, but sometimes Big Sur with the balancing throttling takes longer of course, but sometimes acceptable as compared to heat vs. time etc. Not sure which to stay with.