Hi. I bought a Mac Pro 2019 for the studio and I have a problem like in the video. After turning on the Mac, the transformers in each studio device start working louder. On the recording, of course, the microphone stands very close to the housing with the transformer but this humming is heard in the place where I am sitting. You've got it in your Mac's too. Any idea what it could be and how to fix it?

Try another power source, if possible from another room with Extension Cable to see if its a humming loop.
W

I tried. It is the same from all rooms. I also tried by Furman power conditioner. The same all the time...
S

I'm not sure what you're hearing.

Options:
The first is easy to test: turn off the microphone(s) and "play" another silent source (like a CD player not having a disk in it)

The second one depends a lot on your situation, electrical wiring in your place and even where you're located at around the world as the rules change with regards to electric installations...
The MP7,1 power supply can use a lot of power, esp. if you live in a country where the supply is only 110Volt, that supply can load power lines significantly. Together with other gear in your room, you might be loading a circuit rather high.
The earlier suggestion to try a power supply from another room is a good one, but you'd have to make sure to get it from another circuit down as far away as possible from where the rest of your gear gets its power.
One way to isolate this is if you happen to have a UPS powerful enough to handle a MP7,1 (it's able to draw a lot of power): power the MP through that (potentially forcing it to run from the battery by not disconnecting the UPS from the mains, just as a test).
Older audio gear (or dare I say more "audiophile") can be more sensitive to electrical disturbances on the power network.
An electrician might be able to help you if this is the problem.

The third is harder to test, and you'd need to find out where it gets picked up. It's likely only going to happen on an analog connection or an analog device. Digital connections and pure digital devices aren't going to pick up interference like that.
Try to make sure not to have wires (mic->amp ; amp -> speaker; etc.) near the computer.
Try to isolate where it is picked up by switching inputs or so to eliminate where it is picked up.
This latter option: it should not happen between decent gear. Apple is really not that bad at designing power supplies.
Last edited: Mar 17, 2020
Reactions: winterbass
W

Thank you very much for your answer. I think this is situation no. 2. Booming does not come from the speaker but from the transformer amplifying this speaker. (These are active speakers) I have a UPS. When the Mac is isolated (ups is running on battery) the problem obviously disappears.
S

I'd look -if needed with the help of a certified electrician- at the power distribution in your place. Adding another circuit from where it enters the building to you audio gear might be what's called for to solve the problems.
Also make sure the circuits are not overloaded (or are very loaded).

I've no idea what active speakers you use, but normally modern ones aren't going to pass on minor electric disturbances on the power network into the output. But if they do that, you might do well with a pure sine wave UPS just for them. One that's always converting the mains AC power to DC, and DC to AC again so it effectively isolates the load from the mains.
Last edited: Mar 17, 2020

I am thinking along the lines of #2 as well... almost seems as if, with the MP on, more current is being demanded than can be supplied, and the other transformers are making noise due to something akin to "clipping" of supply AC. A clipped waveform would tend to physically stress the transformers. I tried a little Googling but didn't turn up anything seemingly on-point.

I'd consult an electrician; if your power lines are overloaded or you have some loose connections, you could have a potential fire issue.

this is not a problem with the power supply, but a ground loop that occurs over the wiring
keyword > earthing equipotential bonding
Reactions: 1204949
C

As has been noted, this is a ground loop issue, the neutral or grounds are at different potential and you get current flow from one to another. Sometimes you can fix this by plugging things into the same outlet, power requirements permitting. You can also do things like lift audio grounds, but it's better to fix the underlying problem.

Wiring is almost always the issue. My home office/studio had it when I moved in, decades ago. I needed to remodel it anyway (it was a separate uninsulated building, only wood paneling on studs), so my electrician friend rewired, that was the end of the hum problem. There are extreme measures used by high-end studios for grounds, but this was simply pulling 10-gauge from the house to the studio to replace the existing crap, then probably 12-gauge for the internal wiring.
Last edited: Mar 18, 2020

It doesn't seem like a ground loop to me. As I understand it, the speaker is not amplifying a 50-60Hz hum, but it's transformer is physically producing the noise.


winterbass said:
Booming does not come from the speaker but from the transformer amplifying this speaker.
Click to expand...

If I am wrong, and the speaker is producing the sound thru its drivers, I will concur with ground loop diagnosis. If it is indeed transformers physically making the noise, I would find it hard to attribute the noise to a ground loop.

Sometimes ground loops can be located by reversing the mains plug

Macschrauber said:
Sometimes ground loops can be located by reversing the mains plug
Click to expand...

This is pretty dodgy advice. ground loops generally occur when there are different distances to earth. star earth wiring in studio power points can help. lifting the earth in the audio line wiring rather than the power line can sometimes help too.
Reactions: DPUser
C

DPUser said:
It doesn't seem like a ground loop to me. As I understand it, the speaker is not amplifying a 50-60Hz hum, but it's transformer is physically producing the noise.
Click to expand...

The original post is a little vague ("After turning on the Mac, the transformers in each studio device start working louder. On the recording, of course, the microphone stands very close to the housing with the transformer but this humming is heard in the place where I am sitting."—the first sentence sound like electrical hum, the second physical), but in later posts he seems to be clear it's electrical.

It's definitely 50 Hz, you can see the harmonics... 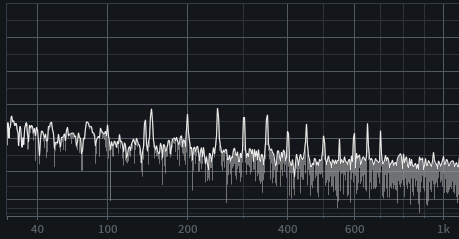 Has Winterbass left, now that spring has begun?

We may never know the truth.

I ran into a ground loop problem when certain Yamaha keyboards (Motif ES6 and S90ES) were connected by both Audio and USB (MIDI) cables to a Firewire interface-connected Power Mac G5 Quad. Lifting the AC ground didn't help, but cutting the USB ground worked wonders.
S

The big question will remain where around the globe he's located. Electrical installations around the world are made to different standards, and even plugs etc. differ (like the mention of turning plug would not be possible in the UK, France, Belgium, and a quite some countries as the pins just won't allow that). Similarly, grounding requirements differ around the world.
Anyway to test it: disconnect all data cables from the mac to the rest of the audio gear. If it's still there, it's not that.
You must log in or register to reply here.
Share:
Facebook Twitter Reddit Email Link
Register on MacRumors! This sidebar will go away, and you'll see fewer ads.
Sign Up
Top Bottom