Nearly six months post launch, base configurations of the new Mac Pro are now available to ship within 24 hours from Apple's online store for its North American and Asia Pacific regions. Base models in other countries are still listed at 3-5 business days, but those should also move to 24 hours soon. Custom-configured models are listed as available to ship in 1 -2 weeks in most countries. 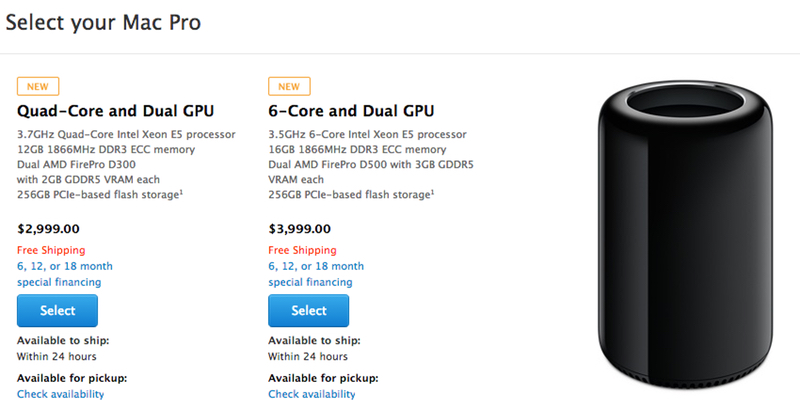 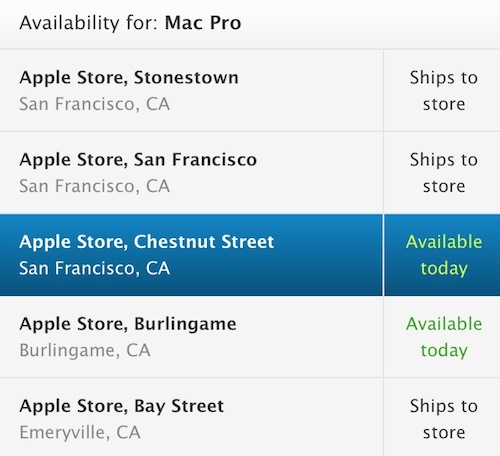 Apple's latest Mac Pro model is assembled in the U.S. at an Austin, Texas facility run by Flextronics. Tim Cook and Eddy Cue recently visited the factory, which has been receiving praise for bringing manufacturing back to the U.S. The plant is approximately a mile away from Apple's expanding Northwest Austin campus that has added more than 700 workers with the recent first expansion phase and eventually will add 3,600 employees to the previous 3,100 employee campus by the end of 2021.

Since the Mac Pro debuted at the end of 2013, Apple has been quiet on the hardware front in 2014, pushing out a small upgrade to the MacBook Air and a new 8 GB iPhone 5c for some markets. Apple is rumored to be working on a Retina MacBook Air and new iMac models, perhaps including a more affordable iMac that will address growth in foreign markets.

Well probably won't be updated for another 5 yrs anyway.

About time! My clients have been very patient waiting for them over the past 6 months, glad to see I can finally tell them "a couple weeks" instead of "a couple months."

A year ago yesterday, this was announced. Think about that one.

Man they gotta get their factory sorted for generation 2.

mrxak said:
A year ago yesterday, this was announced. Think about that one.

Man they gotta get their factory sorted for generation 2.
Click to expand...

And then polish it off by announcing the new Mac Pro later this year.

"Shipping times so bad, that by the time it's next-day, the new generation's ready. Can't innovate my ass!"

So now that that bloody problem is out of the way, how about manufacturing that new Mini???

The Doctor11 said:
Maybe now my apple store will have one on display so I can sit there and play with it all day
Click to expand...

This means that demand is down and apple is doomed
T

try amazon (or other retailers)

I bought my base unit on Amazon a month ago, who had it in stock and delivered it immediately. Of course if you want anything other than a stock configuration, you'll have to go through Apple.

Buying through Amazon (or other e-tailer) will also save you tax in most places, which actually made this cheaper for me than even getting an education discount through Apple.

Theres a couple in Costco in Reading, UK. Slightly amazed when I walked through the store and saw the new Mac Pro sitting on display. It's not hooked up to anything though...
S

There's been one on display at my local Apple retailer in New Zealand for a couple of months now. Go figure.

There has been a display model at Apple store near me for many months, but I try extremely hard not to look directly at it.

I fear my subconscious is in some sort of battle to retain sanity and not buy one, while at the same time searching frantically for some reason to justify buying one. After reading this the war continues to rage on...
M

Does anybody know how many of these Apple has sold so far. Haven't seen any figures yet.
N

Well probably won't be updated for another 5 yrs anyway.
Click to expand...

You're probably right, and with that in mind, I ordered a nMP Wednesday, delivery expected Monday. Looking forward to retiring my 2009, 17" MBP..... Long Media Composer renders have become annoying.
Isn't it amazing how impatient we've become. Five years ago for example that new shinny MBP I bought seemed to be lightning fast.... It's speed hasn't really diminished, just our need for bigger, better, and faster.
Monday can't arrive fast enough.... Huh, see what I mean?
M

martianzero said:
Does anybody know how many of these Apple has sold so far. Haven't seen any figures yet.
Click to expand...

We may never hear numbers. Generally Apple rarely if ever breaks down numbers more specifically than desktops and notebooks.

I'd been wanting to see one 'in the metal' since first announced, as the design and particularly the specs excited me.
Finally saw one in a retail store here in France. And surprisingly I was somewhat disappointed by the design and generally not too impressed. Certainly much smaller than I'd imagined.
Do I need one? No. Would I like one. You bet.
Regarding aesthetics only, I much prefer my G4 Cube, and surprised that the new Pro didn't have the same 'drop-dead' looks. One things for sure, those who want it for sheer performance power probably won't be too concerned about it's looks.
Pleased to hear that shipping times have improved, but so far not a good performance.

nep61 said:
You're probably right, and with that in mind, I ordered a nMP Wednesday, delivery expected Monday. Looking forward to retiring my 2009, 17" MBP..... Long Media Composer renders have become annoying.
Isn't it amazing how impatient we've become. Five years ago for example that new shinny MBP I bought seemed to be lightning fast.... It's speed hasn't really diminished, just our need for bigger, better, and faster.
Monday can't arrive fast enough.... Huh, see what I mean?
Click to expand...

If you've updated the OS regularly, the performance probably HAS diminished. Mavericks is cool, feature-wise, but it's slower than Snow Leopard, to a very large degree.
S

This is by far Apple's worst new product rollout. Announced exactly ONE YEAR AGO and for sale HALF A YEAR AGO....and still the stock configurations are not yet available in most Apple Stores. Worse, Apple has removed the "Available for Pickup" data from the online order form (as shown in this article...it WAS there a couple days ago but not anymore). What is going on with this product?