Apple's worldwide Mac shipments were up in the fourth quarter of 2020, according to new PC shipping estimates shared this afternoon by Gartner. Apple shipped an estimated 6.9 million Macs during the quarter, up from the 5.25 million it shipped in the year-ago quarter, marking growth of 31.3 percent.

Gartner's Preliminary Worldwide PC Vendor Unit Shipment Estimates for 4Q20 (Thousands of Units)​
Apple was the number four vendor during the quarter, and its market share also grew to 8.7 percent, up from 7.3 percent in the fourth quarter of 2020. There was growth across the entire PC market, and Lenovo, Dell, Acer Group, and ASUS all saw sales growth. 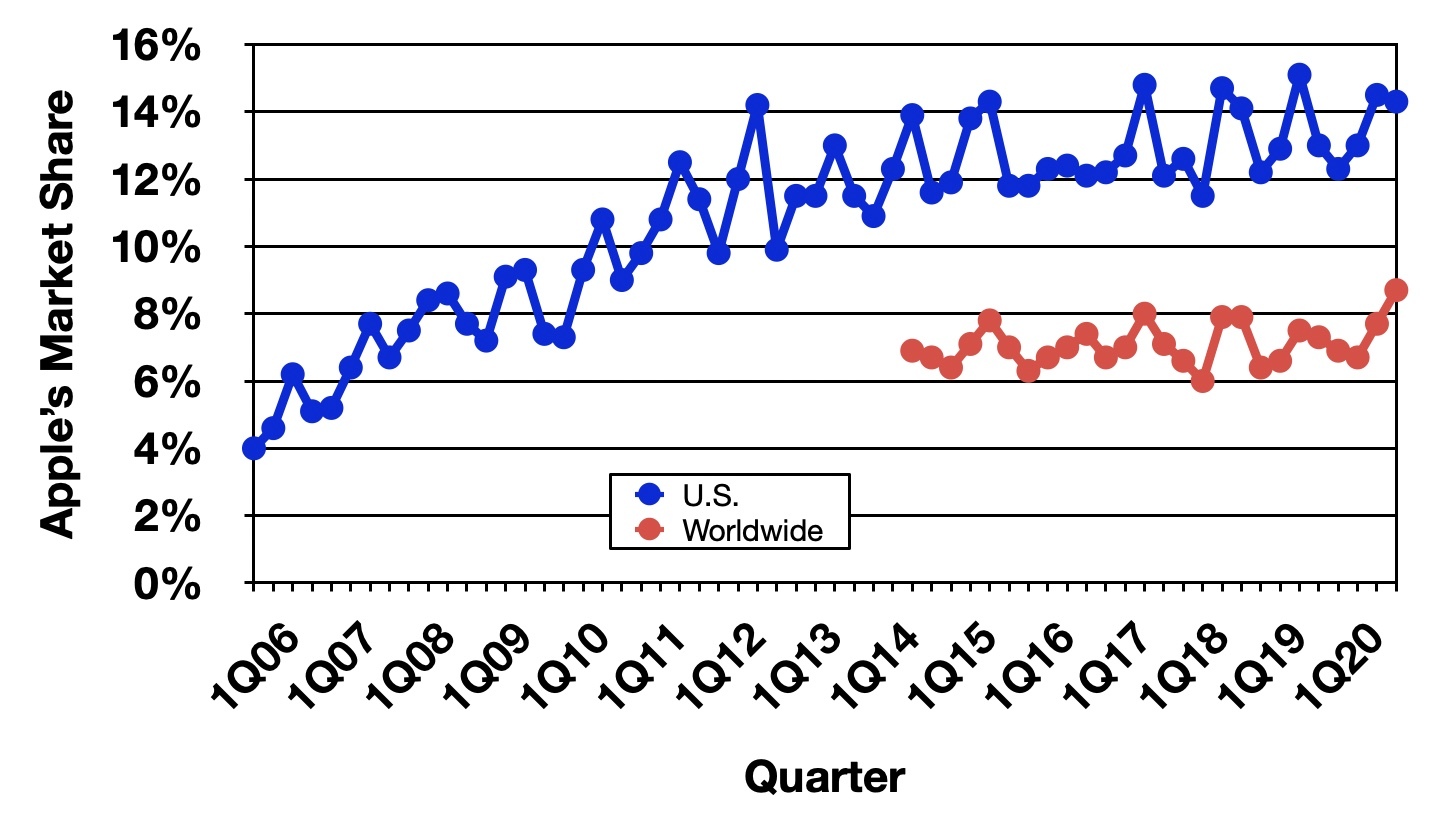 In the United States, Apple was the number four PC vendor with 2.7 million PCs shipped, up from 2 million in the year-ago quarter for a total of 32 percent growth. HP, Dell, Lenovo, and Microsoft also saw significant growth in U.S. shipments.

Gartner's Preliminary Worldwide PC Vendor Unit Shipment Estimates for 2020 (Thousands of Units)​
IDC also released its own shipping estimates this morning, noting similar significant growth for Apple and other vendors. According to IDC, Apple shipped an estimated 7.4 million Macs, up from 4.9 million in the year-ago quarter for estimated growth of 49.2 percent.

Data shared by Gartner and IDC is estimated and not reflective of Apple's actual sales, though historically, it's not usually too far off. Estimated data used to be able to be confirmed when Apple provided quarterly earnings results with actual Mac sales information, but Apple no longer breaks out unit sales for the iPhone, iPad, and Mac, making it impossible to determine exact sales numbers.

Apple in the fourth quarter of 2020 released the M1 Macs, which include the M1 MacBook Air, MacBook Pro, and Mac mini. Mac growth could continue to rise significantly in 2021 as Apple is rumored to be overhauling additional Macs with Apple silicon chips, including iMacs, higher-end MacBook Pro models, and more.

I wonder why that might be ... /s
Reactions: sideshowuniqueuser and pizzzle
W

Build products that people like and people will buy it.

Apple did several things the right way in 2020, unless the years before. Eat this, Jony.
Reactions: vagos, robjulo, Darth Tulhu and 8 others

What does it look like when you add iPads into the count? My next computer wasn't a computer.
Reactions: ingik, philryan, Unregistered 4U and 2 others
S

When you have again an revolutionary line of products that is happening
By the end of 2021, macs will be sold even more than last years by a lot
The m1 was just the beginning
Reactions: DelayedGratificationGene and sideshowuniqueuser

MichaelQ said:
What does it look like when you add iPads into the count? My next computer wasn't a computer.
Click to expand...

This is simply reflective of the fact that if you build a solid product people will buy it in droves. Next year will be interesting.
Last edited: Jan 12, 2021
Reactions: TheEngineer, Saturn1217, philryan and 9 others

Glad to see this.

no, i think it's NOT because of the magic keyboard.

MacRumors said:
Apple shipped an estimated 6.9 million Macs during the quarter, up from the 5.25 million it shipped in the year-ago quarter, marking growth of 31.3 percent.
Click to expand...

Guessing we have no way of knowing how much of that was M1 sales.
Reactions: amartinez1660

bought a lenovo and m1 this quarter... damn. Lenovo is killing it with the sale

kingofwale said:
bought a lenovo and m1 this quarter... damn. Lenovo is killing it with the sale
Click to expand...

Same, except replaced my 15” MBP with a Lenovo X1E
Reactions: sideshowuniqueuser

we've seen covid related growth in2020 and Q4 is no different though there might be some M1 related growth but too early to tell. But it's good to see that Apple's marketshare is going in the right direction
Reactions: DelayedGratificationGene
S

Oh course its only because of the keyboard and has NOTHING to do with the fact everyone is working from home.

This place sometimes.
Reactions: Stella, Henk Poley, Dozer_Zaibatsu and 5 others

MichaelQ said:
What does it look like when you add iPads into the count? My next computer wasn't a computer.
Click to expand...

iPad growth had been declining before covid.

There will still be a long long time to go before tablet sales outnumbers traditional computers.
Reactions: Darth Tulhu

tongxinshe said:
There will still be a long long time to go before tablet sales outnumbers traditional computers.
Click to expand...

Around the time of the next ice age.
Reactions: Benjamid

tongxinshe said:
There will still be a long long time to go before tablet sales outnumbers traditional computers.
Click to expand...

Yeah, but iPad sales do outnumber Mac sales. Sadly. I think tablets have no real advantage and plenty of disadvantages.

I have no doubt, once people gets more and more familiar with M based MAC's; market share will start growing at faster pace. Apple can control almost everything about MACs including price.
Reactions: ingik, amartinez1660 and DelayedGratificationGene

People is starting to realise how revolutionary the new Macs are, and once the knowledge about ARM computers, specifically Apple Silicon Macs, spreads towards more potential computer customers, we'll see an even bigger growth. Many people have been holding on waiting for that big change that Intel promised and didn't deliver.
Reactions: DelayedGratificationGene and Captain Trips

Most of this is cause of corona, still the m1 macs are quite and improvement
Reactions: Dozer_Zaibatsu
K

Is that why it's taking over a month to ship my freakin Macbook Air?!

hot-gril said:
Yeah, but iPad sales do outnumber Mac sales. Sadly. I think tablets have no real advantage and plenty of disadvantages.
Click to expand...

Wrong. Tablets have size and simplicity.

Which you chose depends on your use case. I’m as hardcore a computer user as any, but for example at home I don’t want to use a laptop or desktop for reading news or documents. Or in cookbook mode in the kitchen. And if I leave home, tablet still beats laptop for size, compactness and weight.

Laptops and desktops have their pluses too. In particular with the M1, the laptop might obliterate the desktop, as an LCD and Thunderbolt dock is a lot simpler and cheaper.
Reactions: phenste, iPadified and amartinez1660
You must log in or register to reply here.
Share:
Facebook Twitter Reddit Email Share Link
Register on MacRumors! This sidebar will go away, and you'll see fewer ads.
Sign Up
Top Bottom