It depends on which 2015 MBP model you have there were three different processors. I have the 2.9 Ghz i5 and 8Mb RAM and it is very fast, I doubt that the 2017 would be much faster in day to day use. Things that slow computers down are more likely to be accumulated background activities, not enough unused storage for virtual memory to function effectively and running CPU hungry applications.
It's a good idea to either perform a "clean" instal of your macOS or a thorough housecleaning every couple of years.
Reactions: macintoshmac
F

There is a big difference. The 2017 supports hardware video playback and encoding which makes a huge difference for battery life and cpu usage for these items.

pshady said:
is there a big difference in performance that’s noticeable in day to day use between the i5 2015 MacBook and the m3 2017 MacBook? i love my 2015 but it is relatively slow and i’m tempted to get a 2017.

If you have the choice, take the 2017, it will be supported a while longer and is more current in terms of hardware.

Its definitely worth going for the 2017 model. If you do a search on here, I think @EugW has done some great posts comparing performance of models.
P

I have had both and currently use a 2017 as my daily driver. There is absolutely a noticeable difference in performance between the m5 2015 and i5 and i7 2017 models.

However the difference is not like night and day, it is more subtle. You feel it in Chrome tabs, video playback, the snappiness of response to clicks and an absence of a feeling of waiting or delay that I did get with the m5 2015.
Reactions: EugW and ascender

I had the 2015 and the bought a 2017. there is a noticeable keyboard difference and the HZ rate is only 30 vs 60 with 2017 when plugged into a 4k ultra fine LG monitor. I still use the 2017 daily. I have the full size iMac Pro magic keyboard and swapping between that and the 2017 keyboard it doesn't bother me much although obviously the iMac Pro keyboard is top notch. the 2015 keys aren't really good. way too flat. go for 2017 or not at all

FilmIndustryGuy said:
I had the 2015 and the bought a 2017. there is a noticeable keyboard difference and the HZ rate is only 30 vs 60 with 2017 when plugged into a 4k ultra fine LG monitor. I still use the 2017 daily. I have the full size iMac Pro magic keyboard and swapping between that and the 2017 keyboard it doesn't bother me much although obviously the iMac Pro keyboard is top notch. the 2015 keys aren't really good. way too flat. go for 2017 or not at all
Click to expand...

Use the 23.7-inch LG UltraFine 4K Display with your Mac or iPad

Learn about the 23.7-inch LG UltraFine 4K Display and how to use it with your Mac or iPad.
support.apple.com

However, some people have complained the machine can sometimes feel sluggish when hooked up to a 4K monitor. I can't say myself though since I don't own the 2015. I have played with the 2015 a bit though (not with a 4K monitor).

The 2017 keyboard is noticeably better. The 2017 m3 is also noticeably faster than the 2015. The 2015 felt sluggish to me even back in 2015, which along with the bad keyboard is why I didn't buy the 2015. even though the form factor and overall design were what I had wanted for years. I waited for the 2016 and was still unimpressed, but the 2017 was a noticeable change.

Plus the 2017 also supports both hardware 4K 10-bit HDR HEVC decode and encode. 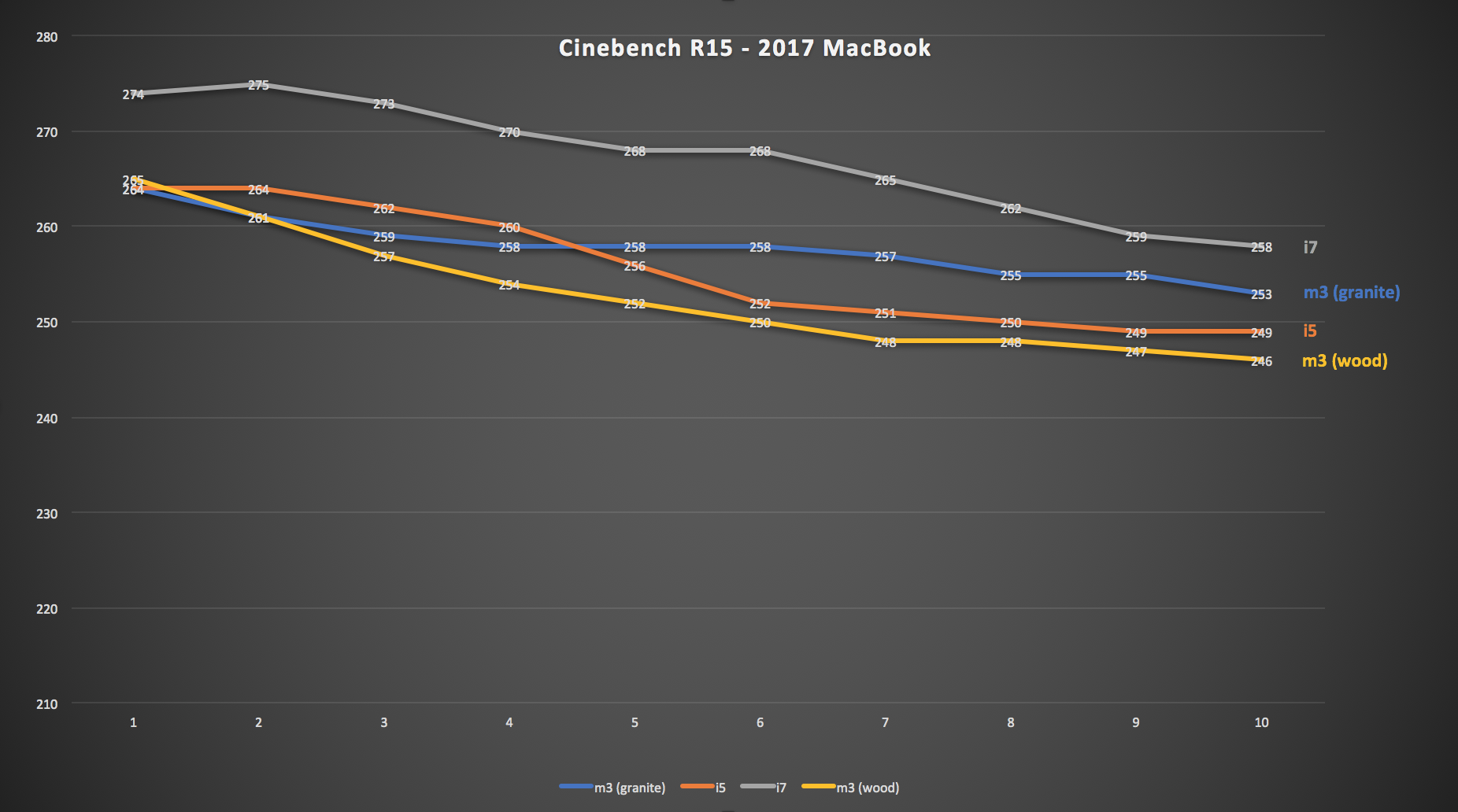 I posted this originally in a different thread, but I think it deserves its own thread. See this post for results of the m3, i5, and i7, with the m3 tested on two different table tops...

This is a more complete graph of the 2017 models later on in that thread, that also includes a comparison of performance vs. table composition/insulating properties (since the machine is fanless): 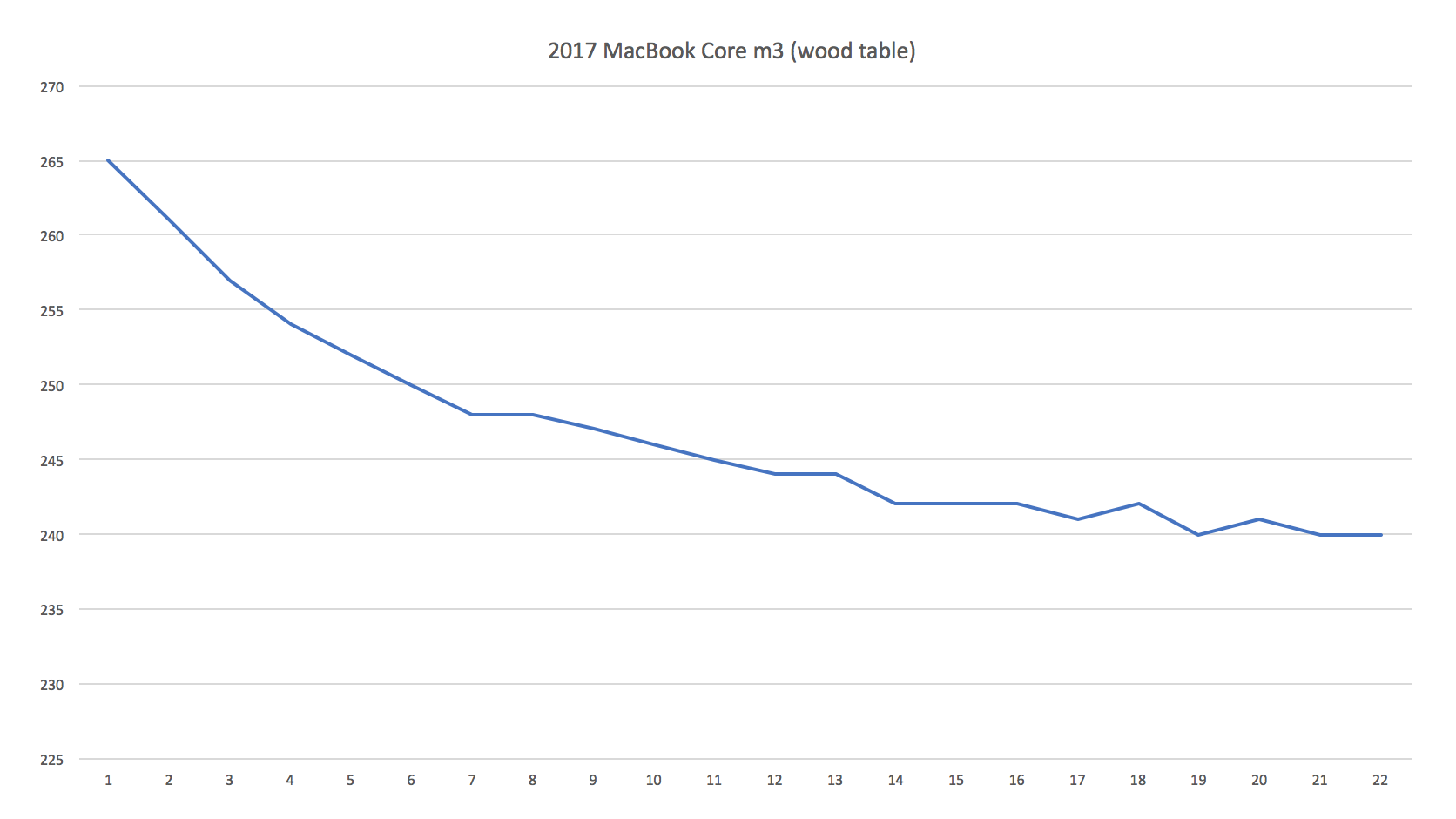 As I suspected, the table material makes a difference. The first time I ran the test on my 2017 MacBook Core m3, I ran it on a granite counter, and turned off WiFi and Bluetooth. I just ran it again, but this time ran it on a wood table (which would act more as an insulator, keeping the heat...