MacBook Freezes Upon Waking from Sleep

Whenever I close my computer to put it to sleep and then open it up later, the computer freezes and I am unable to type in my password to unlock my computer and am forced to hold down the power button until it turns off and then reboot it. This has become a major pain and has only started today but has happened 3 times already. I have an Apple Bluetooth Keyboard and a Magic Mouse connected to my computer and am running 10.6.2 if that helps. Anybody have any idea as to what may be causing this and how I can fix it? I'd rather not have to shut down my computer all the time and I'm no longer covered by any protection.

I am a mac engineer at a service provider.We see this problem on macbook's a fair bit.


It sounds to me like it could be a fault with your battery/sleep switch.

The battery/sleep switch is a small chip attached to the battery connector that makes contact with a magnet built into the side of your display so when you shut the lid it makes the contact and that is what makes the macbook go to sleep. When you wake the machine it loses the magnetic connection which wakes it up.

Sadly the only way to really get to the bottom of this is to visit a service provider who can fit a new sleep switch/test the current one.

I hope this helps

I see where you're going with that, but I don't entirely see how that could be the primary cause of this. The computer goes to sleep fine and the display turns off, but when I open it the display turns on and it is the window where I have to enter my password that freezes, there is no mouse and the text entry cursor (the little blinking line, not sure what it's called) doesn't blink. It is the window freezing that makes me think that it is probably a software problem and not (entirely) a hardware problem, because the battery/sleep switch appears to be aware that I've opened my screen due to the display powering on.

I'll try making a new account this weekend (too busy during the week with classes) and see if that helps. I'm also a little short on cash right now and the computer isn't entirely useless (I can always save my stuff and make sure to power down everytime, despite how annoying that may become), so I'm not really sure that I want to drop the money on an expensive repair right now, I will probably be in the market for a new computer in the next year or so anyways, so money might be better spent saving up for a new computer if I am unable to fix this myself.

Thanks so much for your help so far intheknow.

EDIT: I've realized that it doesn't freeze up if sleeping for about 30 minutes or less, but when I let it sleep over somewhat long periods of time (an hour to overnight) then it will freeze. I don't really understand how this time part is coming into play.
T

why dont you just disable your p/w so that you will automaticaly log on when waking from sleep. just a thought, hope it helps.
tug

I would and I do when I'm home, but I have a roommate that doesn't exactly respect my privacy or personal space (I've caught him digging though my desk before) and I use the password as a precautionary measure. Thanks anyways though.

Have you tried creating a new account as stated above

I'm gonna try that tonight, like I said, I've realized that it happens when it is sleeping for longer periods of times, so I'll make a new account tonight, sign on to that account and let the computer sleep overnight and see if it still happens.

You should disable the password requirement too just to test to see if it makes a difference.

I did not get to create a new account yet to see if that works, but I did try removing the auto-lock for the password after sleep or screen saver. Last night I went to bed and shut the computer to put it to sleep (with the password disabled) and when I woke it up this morning it worked fine, no freezing or anything. Today when I went to work, I manually locked the screen (see the image below) and put the computer to sleep. When I came back from work 5 hours later and woke up the computer I had the same problem that I had before, the password entry screen was frozen and there was no mouse at all on the screen. This has be believing that it is something software related to the password entry screen, anybody have any ideas? 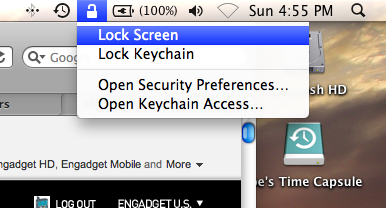 Have you tried cleaning the caches?
I would also try an Archive and Install of Mac OS X
Finally, try a PRAM and SMC reset.

celticpride678 said:
Have you tried cleaning the caches?
I would also try an Archive and Install of Mac OS X
Finally, try a PRAM and SMC reset.
Click to expand...

I might try an Archive and Install when I get the chance, but my schedule is insane during the week, so I probably can't until next weekend.

EDIT: I reset the PRAM and the SMC, I re-enabled the auto-password for the computer and I'll put it to sleep in a few minutes and I'll wake it back up when I get back after the game tonight and see if those helped, I'm still not entirely sure about what caches to reset, hopefully I won't need to do a full Archive and Install.

Re-enabled the password last night after the PRAM and SMC resets and the problem still happened. This is starting to really bug me, I might just test my luck with my roommate's respect for privacy and turn off the auto-password lock.
M

Any luck on this - I have the exact same issue on my MBP running OSX10.6.3. WOrks fine if I wake the MAC up < 60 minutes or so but not if its in screensaver mode or sleep mode for longer than that.

Sorry, for me the only solution was to disable the auto-password on the computer, I haven't re-enabled the password for months and I haven't had the problem at all since. I've since moved out of my last room and no longer have to worry about anyone using my computer without permission, so I haven't felt the need to re-enable the password. Hopefully somebody can figure this out for you.

I had a similar issue, and a new battery fixed it. I didn't even know that it was a common solution... my roommates macbook died and I stole his battery because it had a longer life, and to my surprise it solved all my problems couldn't be happier
E

Anyone resolve this issue yet?? Was getting a new battery the absolute end all fix all?? An update would be nice...

Thanks in advance...
T

I have the same problem with my Macbook(2006). It seems to freeze when its cold, i have found that if its been running for a while i don't have the problem.

Could it be RAM? It does seem to be more hardware than software related.

I also tried a SMC reset, as the cooling fans were running very fast, this cured my problem with the fans but not the freezing issue.
You must log in or register to reply here.
Share:
Facebook Twitter Reddit Email Share Link
Register on MacRumors! This sidebar will go away, and you'll see fewer ads.
Sign Up
Top Bottom