So, after using an MSI Wind with 10.6.2 and all prevaling OSX versions that can run on it for almost a year, an opportunity came up to buy a really beat up MacBook from a friend, with a dead screen, hinges, missing keys, and broken bezel. It was stepped on, and the MacBook was a black 2GHZ Core duo.
But I had two other broken water damaged MacBooks that I got free, but they were white... What to do? Well, make a GrayBook as I call it. Here's the procedure copied from a post I made:

One Black Core duo which was stepped on and had a broken screen and hinges which gave me:
Only working Logic board of the Pack (2.0GHZ Core Duo) I paid 140$ for this one
2 512MB sticks (Removed one and added a 1GB Stick, yes I know matched pairs, gonna find another 1GB soon)
Bottom case.
Top lid
Half the keys for the keyboard.
The Second MacBook Free:
2.0GHZ Core Duo white gave me with coffee spilled on it
Top case with trackpad, and half of the keys
Bezel
Hinges
Screen
other screws etc.
Fan (The one inside was going clack clack clack)

One 2.2GHZ Core 2 Duo which a dog peed on, Free for getting data off of:
DVD-R Drive one that was in it wouldn't eject
Sleep Light, the one that was there originally was borked and did not light, and IR did not work. Now it does
alternative screen with no pressure marks like the one I have now but one noticeable 1/2 inch scratch.
Various screws.

I am yet to finish it,
I am still prototyping the new top screen assembly using the Black lid, a red apple, and the screen with a scratch on it, and the bezel from the 2.2GHZ which is really beat up. The current top assembly is straight from the 2.0GHZ White.
Here's a pic of it in it's current state. 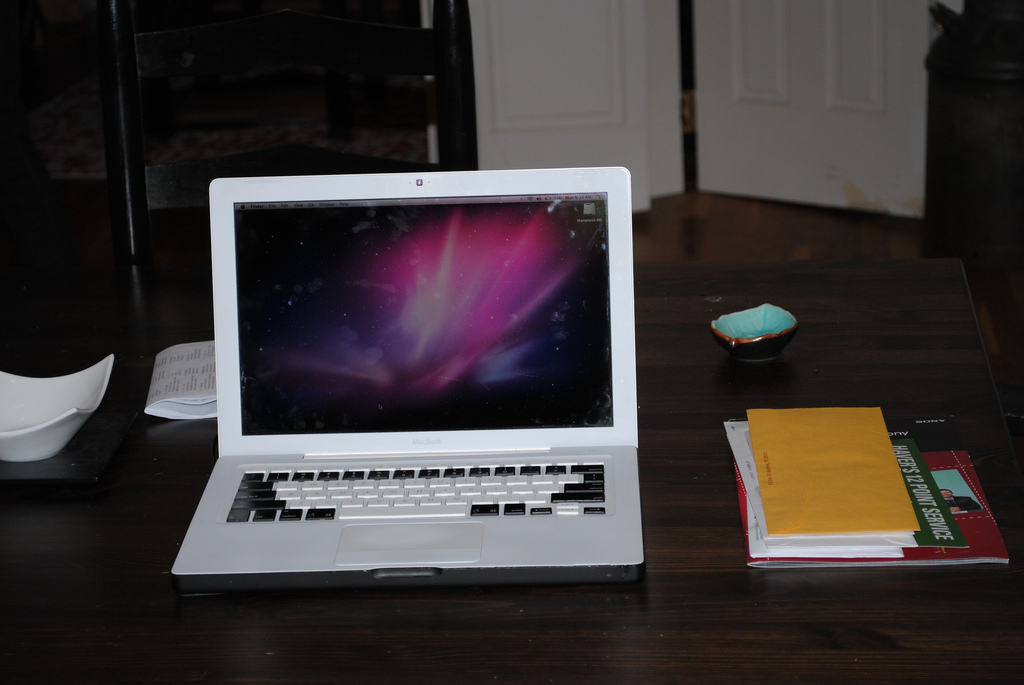 Thanks for reading the long post
-Mars478
P.S. I know I am not the only one to have done this, if you have something similar POST Pictures! And I am open to suggestions, as I said, it's not done. 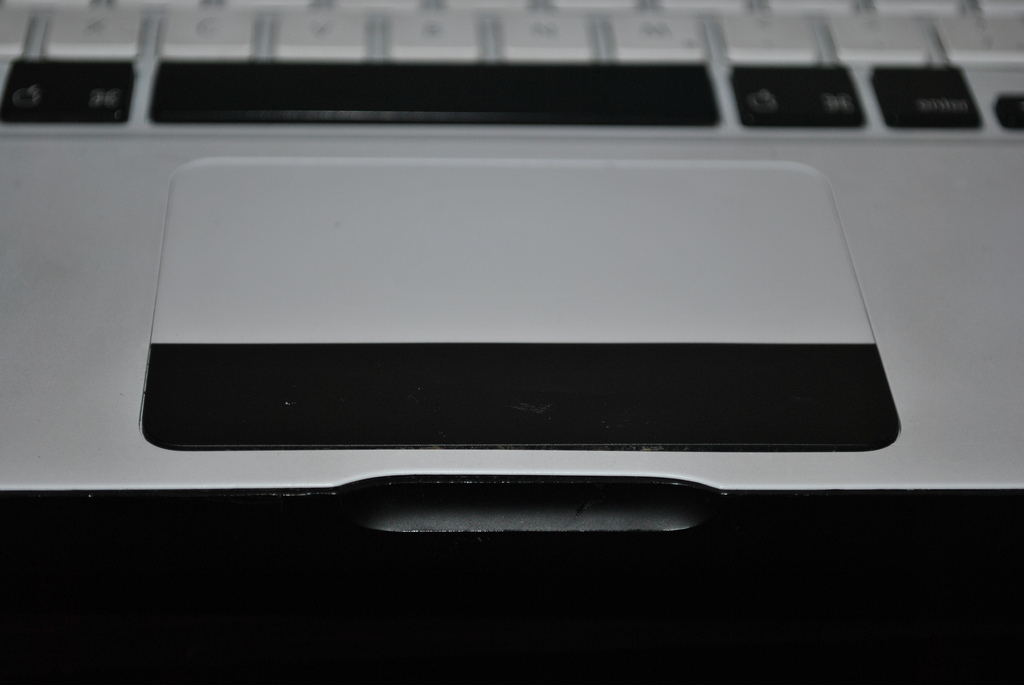 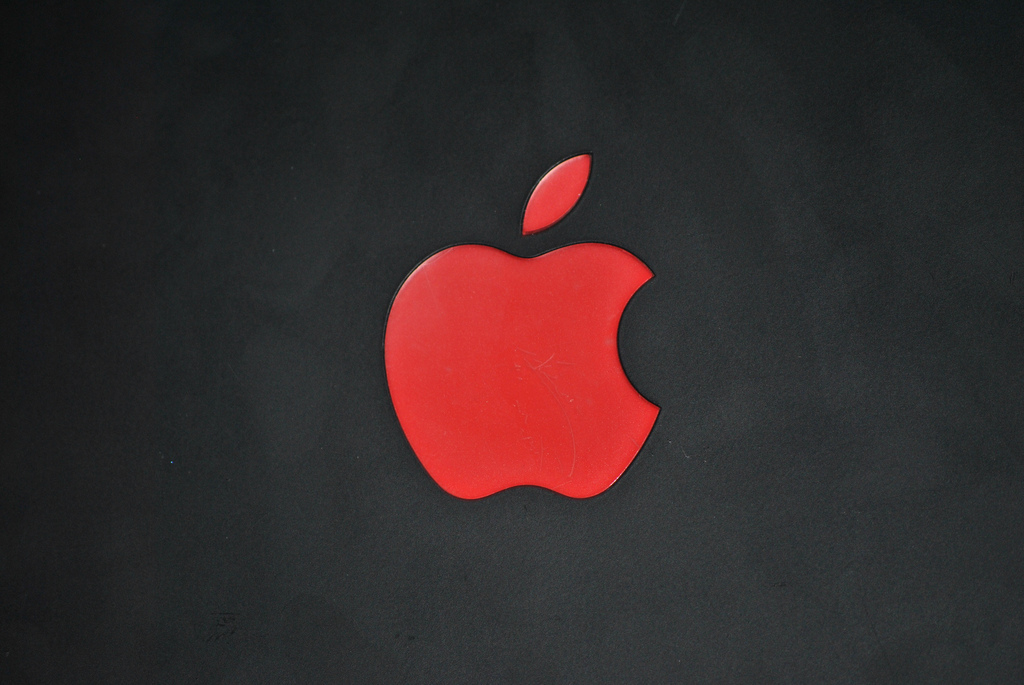 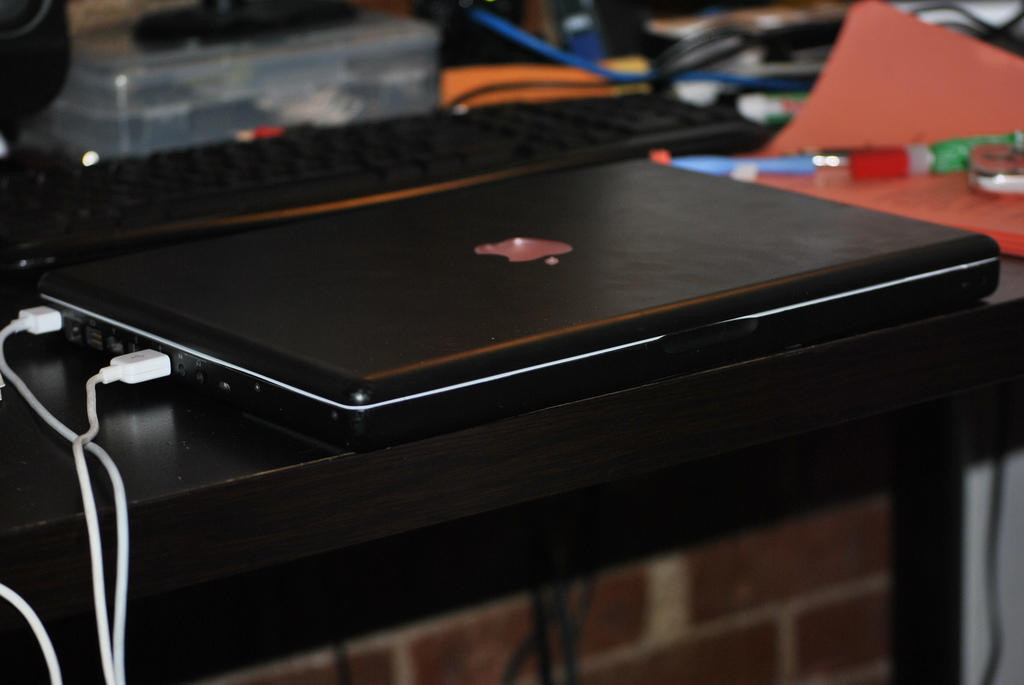 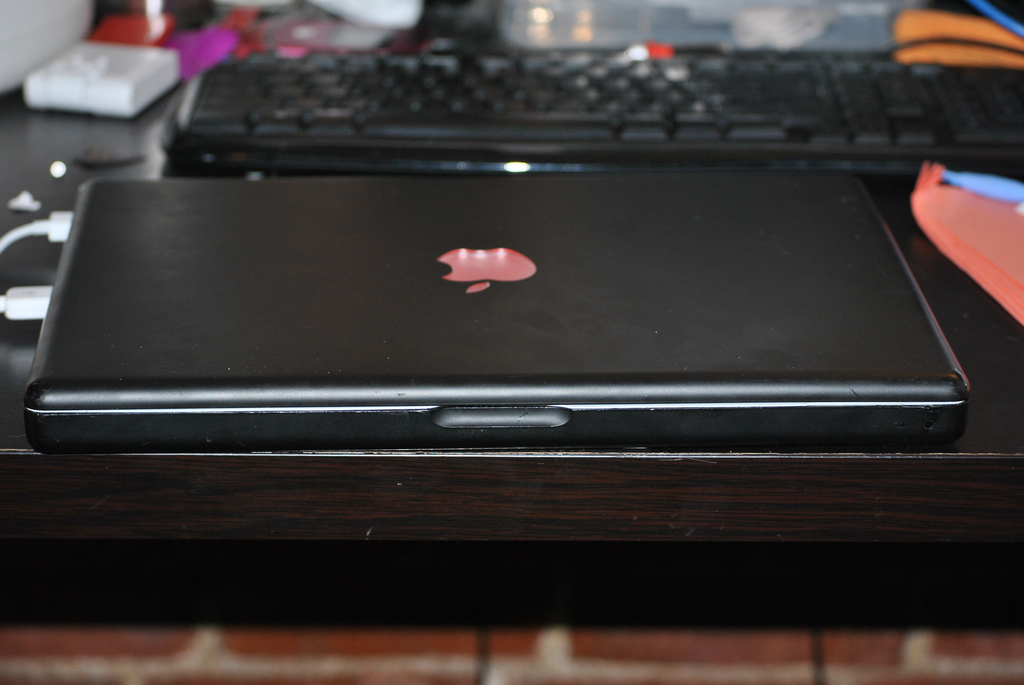 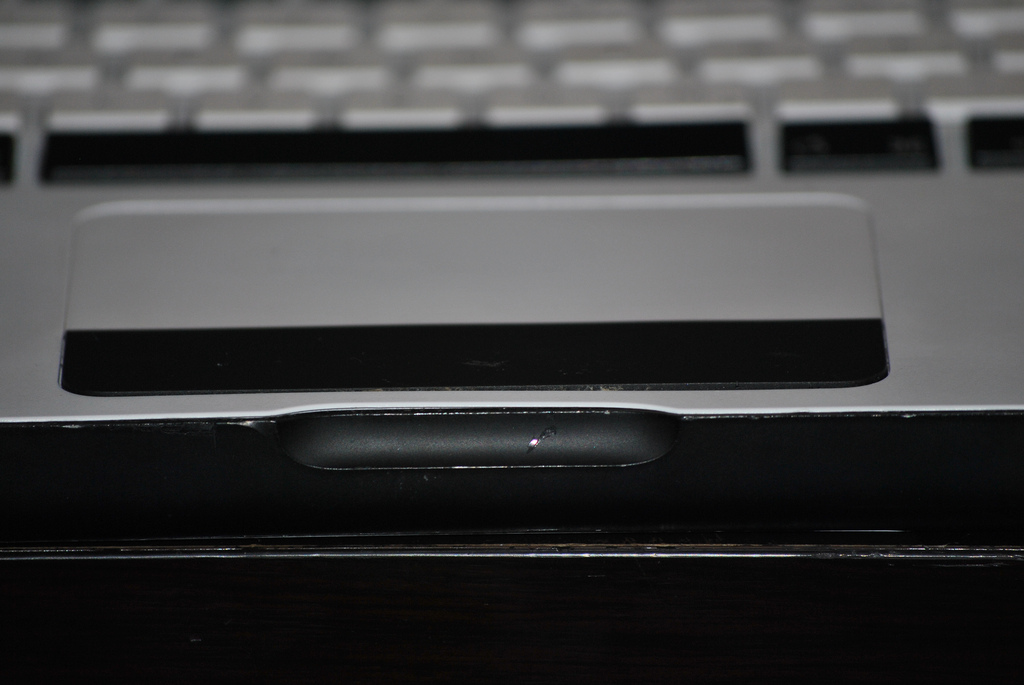 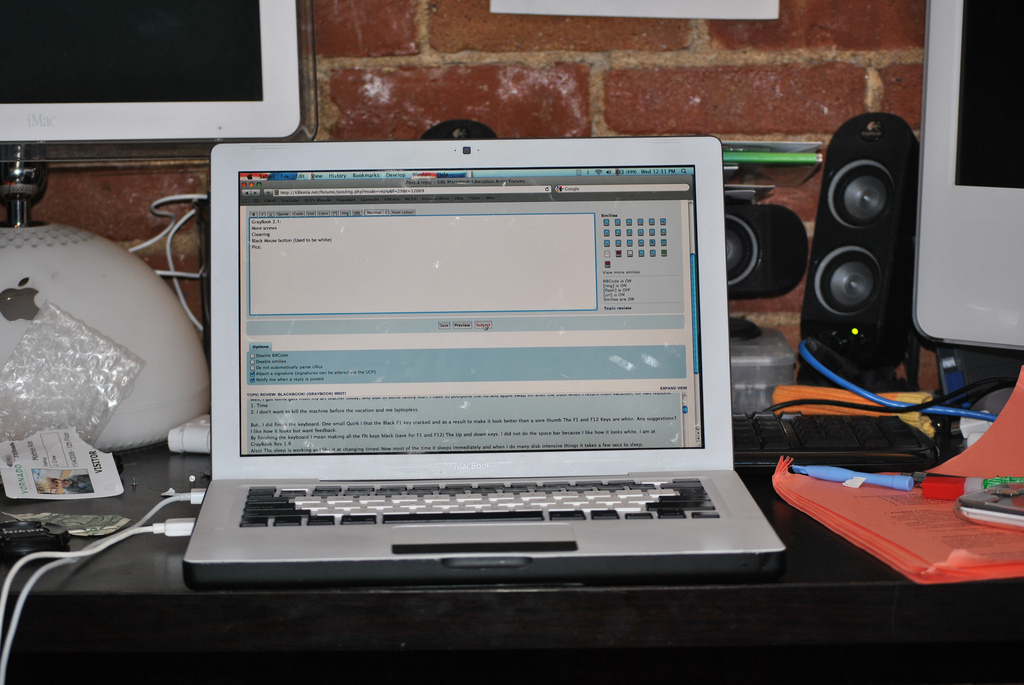 No this not an April Fools joke
T

Thats sick! I have always wanted to do this but my macbook is still under warranty
Comment

Could you have not found the up/down arrow keys in black? Your work is great, just saying that this kind of takes away.

this is awesome! its freaking amazing!

"Could you have not found the up/down arrow keys in black? Your work is great, just saying that this kind of takes away.

And post more pictures, from other angles and showing different parts of the laptop."

Yep, I haven't done them just yet, because they are a beotch to take off and on along with the F1-F12 keys. I broke 2 keyswitches trying to put on the black ones. I have to conecentrate more
There is a set over at my flickr, but it's not very good, iPhone pictures suck.
I just got my Nikon D3000 so I will be taking many pictures of it.

"this is awesome! its freaking amazing!

see this thread...this awesome dude dyed his macbook orange...looks awesome with black and orange checkered keys...haven't seen this cool mod anywhere...sick...(btw your mod is awesome too...i like black/white combo )"
WOAH! I think I am going to have to try that with my spare white parts that will be left over

Thanks for the support people!
[EDIT]Pics: 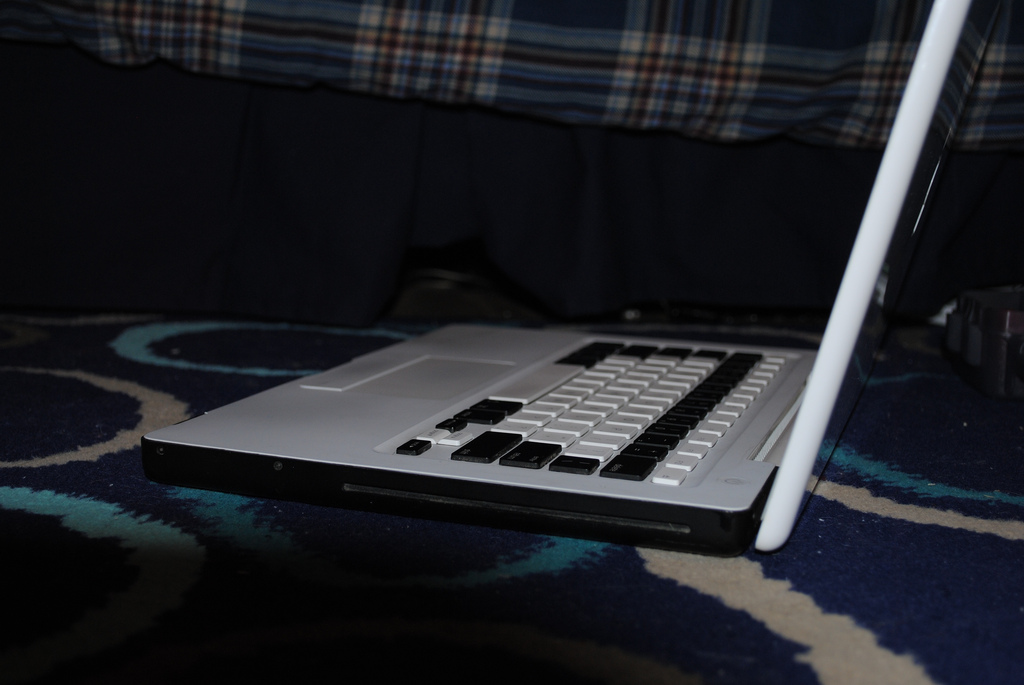 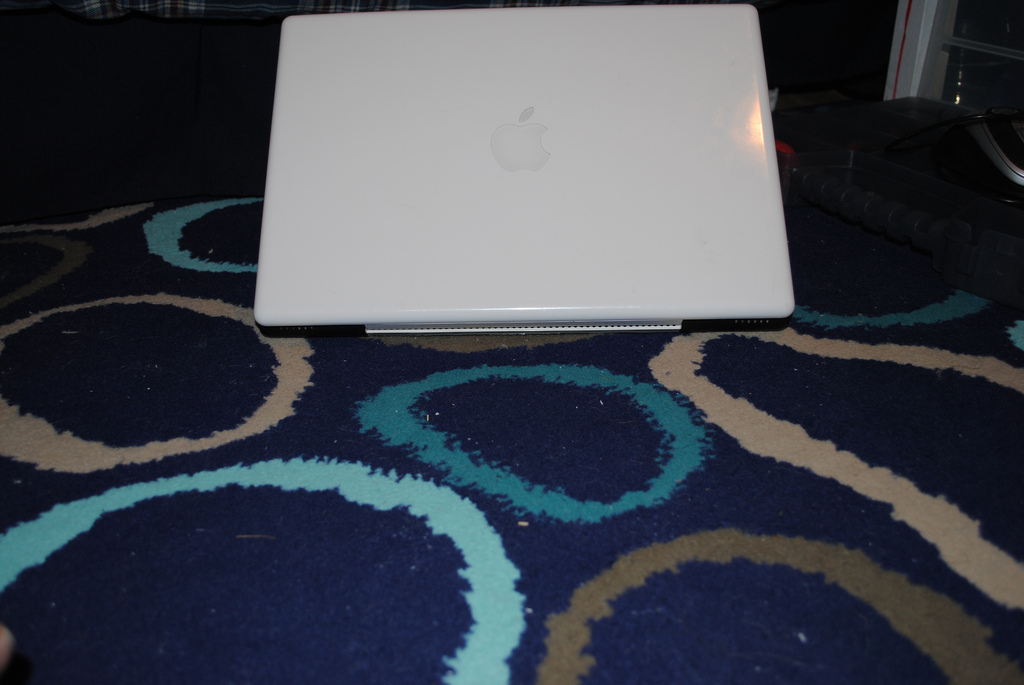 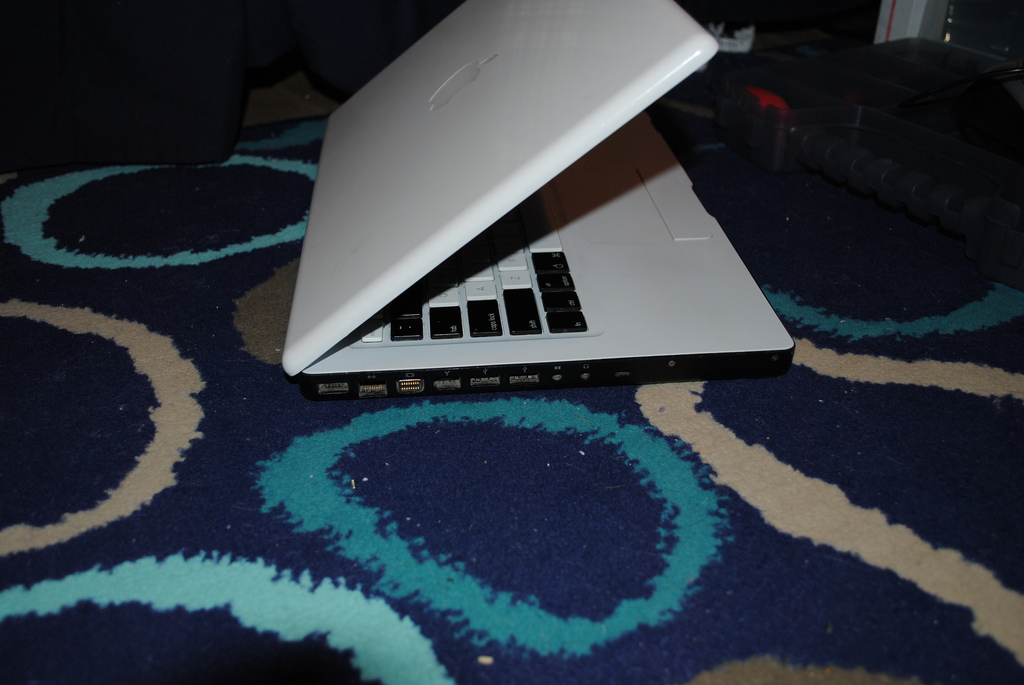 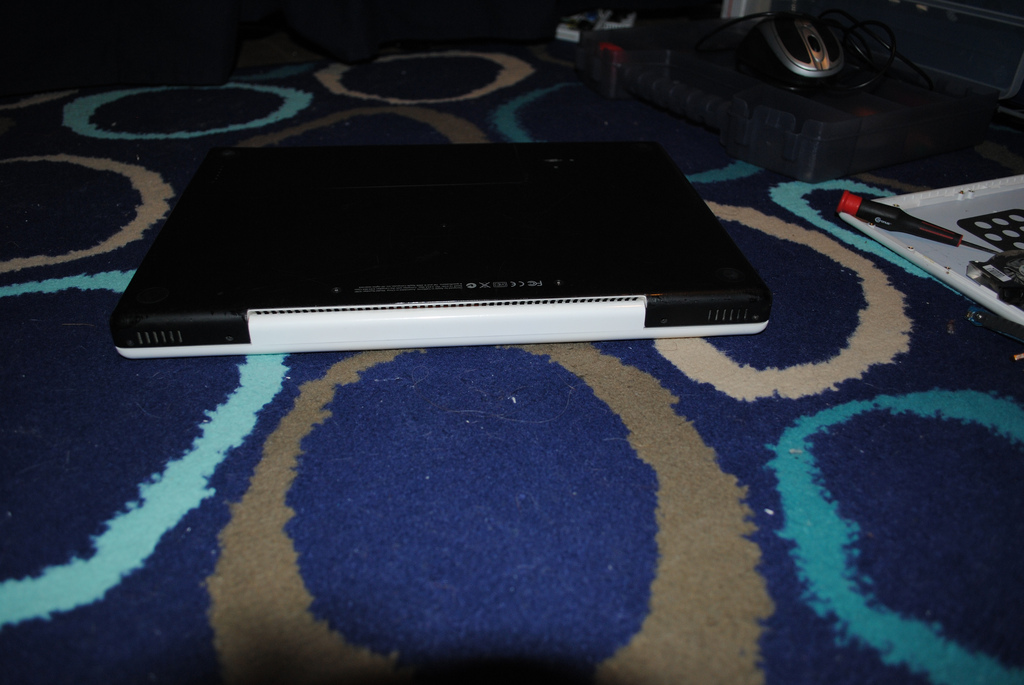 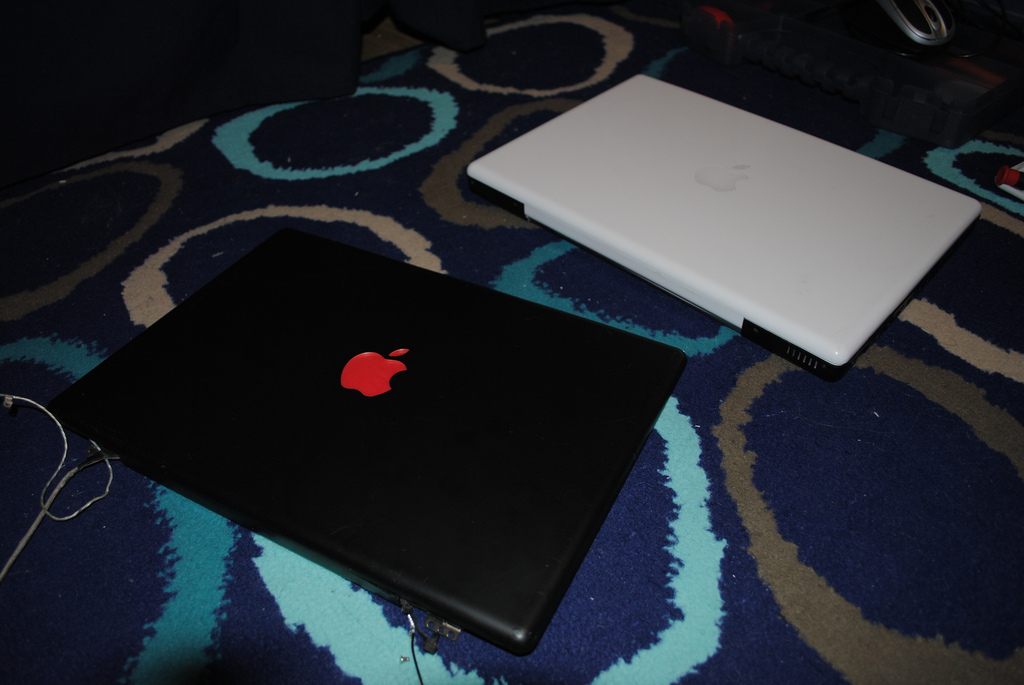 i don't know why but this looks like Darth Vaders MacBook, i mean - if he had one

Prekesh said:
i don't know why but this looks like Darth Vaders MacBook, i mean - if he had one

Heheheh, I want a red Apple, just for that purpose, to make it look eeeeevil.
Another name I had for it was Oreo, but I don't like Oreos. I like GrayBook better anyways.
Comment

Well a small update, I just found a matching 1GB stick, so it now has the max of 2GB of RAM.
Comment
A

Well i have come into owning a green slice of plastic which glows nicely. The Apple will be green, and neon green. Ooooh yeah, be green with envy
Comment
J

...I wonder what the apple store will say if you bring that in for the "cracking case" issue later on?...
Comment

J&JPolangin said:
...I wonder what the apple store will say if you bring that in for the "cracking case" issue later on?...
Click to expand...

Cracking on the Trackpad assembly etc? It's already got that. Do they replace that?
I am pretty sure I voided every warranty No duh I did
Comment
M

I did this a while ago but dont have it any more :< it was a 1.83ghz core duo. The palm rest got all messed up so i replaced it and the bazel to be black.
Comment
V

Very Sexy! I love the look of pieced together parts...

You know, if you were to keep that red apple logo I have a trick that would just set it off and make the machine... Will edit this post when I get a pic up.


Any questions or ideas, feel free to ask I would love to help!

infinitethrill said:
Very Sexy! I love the look of pieced together parts...

You know, if you were to keep that red apple logo I have a trick that would just set it off and make the machine... Will edit this post when I get a pic up.


Any questions or ideas, feel free to ask I would love to help!

Hehehehe Thanks! Hey, you're the famous Tangerine MacBook guy! What an honor!
Post the pic! I am thinking of doing the dying on some of my extra white parts! Can you link me to the procedure? YOU ROCK! Thanks
Comment
1

I am setting up my friend's blackbook with a red apple logo and the red keyboard I have right now for his bday. Its just sexy having that twotone red on black... Red Black and White in your case would be interesting, but you can pick any scheme you want thats the great thing about it!


I should make a tutorial about how to dye keyboards huh, its quick easy fun and the results really pop!

Ask anytime if you want a walkthrough on getting that done, or send me an IM anytime my screename is infinitethrill on aim!
Comment

WOW! Do you boil them? How do you keep them from not warping? And where'd you get the top cases? Mine has a crack on the bottom near the sleep light and at the top right of the trackpad.
How would GREEN on a keyboard look like? I don't think I would like black and red because it's slightly emo and reminds of Twilight (SHUDDER)
Comment
1

Sure Green would work great!

First, you need to pick a color: http://www.ritdye.com/Color_Chart.4.lasso

Go get a packet (should cost around $3) and get a spare White topcase... Give it a good cleaning first with isopropyl alcohol and a toothbrush.

Fill a small pot wide enough to fit the length of the space bar. Don't fill it to the top as this is dye you are going to be boiling and it can make a mess (it wont stain if you don't leave it, just have wads of damp paper towels ready to wipe whatever needs wiping). Bring the water to a boil, doesn't need to be crazy boiling just normal and add the packet of dye. Have a mixer (I used a metal spatula, just something to keep the keys moving). Drop in the keys and stir! The only thing to watch out for is the keys sticking together (like if the faces of a small and the space bar were to go together, the dye won't go in-between them) so lift them occasionally to make sure they are good. Now, it matters what color dye you use but it could take a long time or it could be 5 minutes to get the shade you want. It wont hurt to pull out a few keys and rinse with cold water, this will be the color they will stay once cleaned so if you want darker leave them in another 5 minutes. When you are happy with the colour pour them into a strainer and rinse with water for a few minutes! Just be careful when pouring this dye as it can leave stains (nothing that wont come out with ajax). Grab a new black (or white if your into that sort of thing ) topcase and reassemble the keys! Your done! Make sure to post pictures here and share your experiences, thats a requirement too.
Comment
S

Here's mine, I was never a fan of the mixing black/white keys, so I just did top and bottom case from a Blackbook: 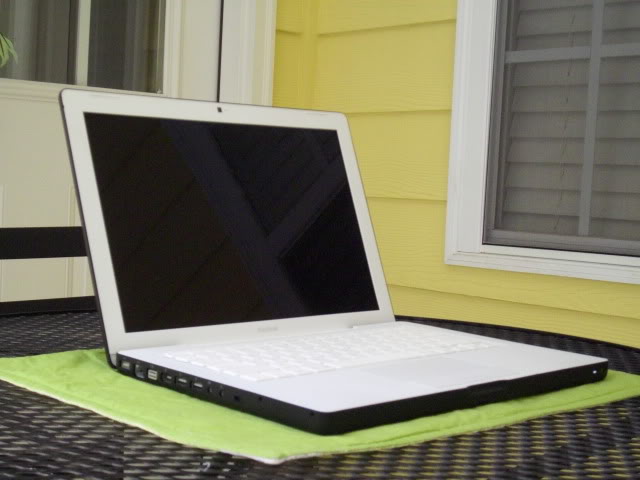 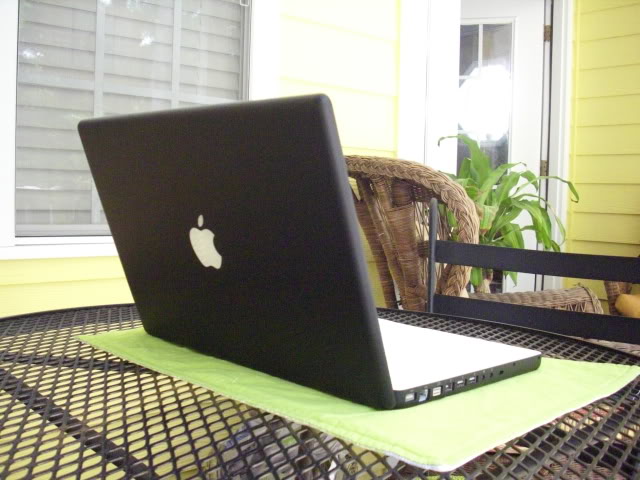 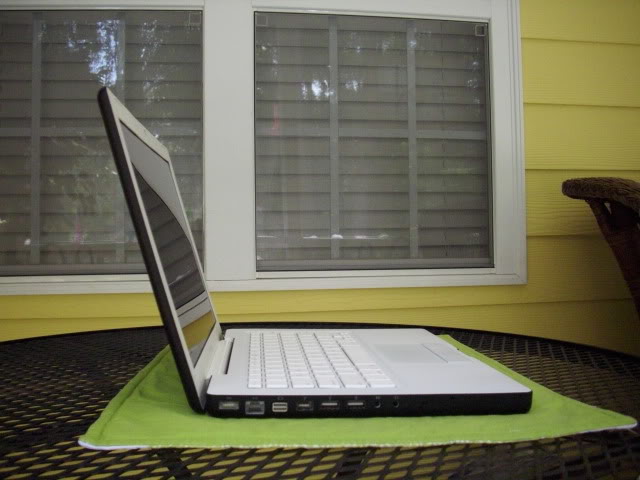 Nice Job Silvia!
Did you build it from broken ones or for entertainment? I can see your Logic board is from a White Macbook by the ports. You black components seem in much nicer condition than mine, and your sleep light is very nice. How's your top case?
I like the concept of keeping it clean; white inside black outside. But that's not what I am after .
I am going to do the lid swap maybe today.
Comment
S

S
What MacBook (or iPad) did you buy to work from home?

Saturday at 5:17 AM
Mike Boreham
M