MacBook Pro || For a Computer Science Degree? Yes or No

I understand each uni has different things going on and being taught, so what one person experienced is not true for all. I also have been told that there are some mac users in the CS program, but they haven't talked to them and don't know what they can and cannot do with OSx that they do with Windows.

So basically here I'm looking for anyone who is either
In
Was In
Teaches
Or just really knows about CS degrees and how a Apple would fair in that environment.

PS-- what exactly do you learn? Besides programming?

PS- S - I was also wondering, I am basically awful at math. I mean, I don't hate it and I don't fail miserably, but I just am not the best; same with science. I honestly am actually good at writing, but that won't help me here.

Being not the best at math, is it a good idea to go for a CS degree?

I know this has been asked before in other forums and sites, but this stuff changes constantly, so I wanted to ask again. (so if you're reading this in 2012, you should probably repost the question, not take what you see here)

I am going to uni next year for a computer science degree. I have a couple of friends there, who are taking the same thing already and it's great to be able to see what I need to prepare for, however;

I seriously am thinking about going and buying a 15" MBP today (again) but I am thinking, is that suitable for CS??

I mean, a lot of what they are doing now is command line C++, and obviously Xcode can handle that. But I wonder if at some point having a mac will become useless. If I am going to have to end up running windows 90% of the time, I don't think I'll go with a mac...

But if I can scrape by with only using windows here and there, then cool.

EDIT: After the Poll and advice given here I have made my purchase.

Taken with BlackBerry Tour so be nice 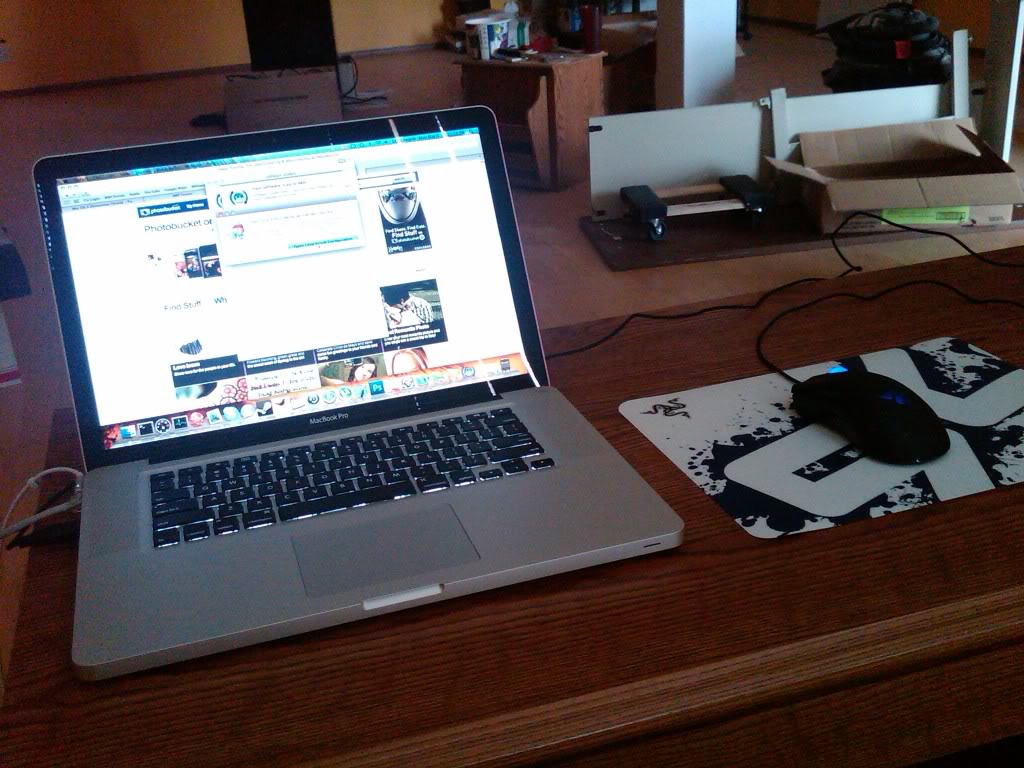 How patient are you and how much do you want to carry?
T

I would like to hear some good replies to the OP as well!! I'm doing CS at uni as well and was wondering the same thing..

Eidorian said:
How patient are you and how much do you want to carry?
Click to expand...

I don't understand the question

Each uni teaches on a different OS. Mine taught C++ on linux using gcc and a text editor. In this case, OSX will be great.
S

I am web developer and wouldn't get through the day without a mac. The entire offices run Macs. It's a pretty seamlessly integrated environment. I can do much more with my OSX machine vs. windows. I hate even using windows servers and such. Everything is so much simpler on a unix file system. If there is something you need windows for there is always Boot Camp or a virtual machine to get the job done.

shadygrove said:
I am web developer and wouldn't get through the day without a mac. The entire offices run Macs. It's a pretty seamlessly integrated environment. I can do much more with my OSX machine vs. windows. I hate even using windows servers and such. Everything is so much simpler on a unix file system. If there is something you need windows for there is always Boot Camp or a virtual machine to get the job done.
Click to expand...

Ok thank you for that, that makes me less nervous.

I got a CS degree using only a Mac as my main computer and I can say it is very easy. You of course have bootcamp if you need to code using a certain IDE or language (I had to do some C#/Visual Studio coding) and most of the popular IDEs are available on Mac (NetBeans/Eclipse).

Blizzardman said:
I got a CS degree using only a Mac as my main computer and I can say it is very easy. You of course have bootcamp if you need to code using a certain IDE or language (I had to do some C#/Visual Studio coding) and most of the popular IDEs are available on Mac (NetBeans/Eclipse).
Click to expand...

How often were you using Windows? How long ago was this?

Unless you need to code for Windows, all need is OS X, an editor, and Terminal.

rmbrown09 said:
I don't understand the question
Click to expand...

CPU power and the weight of your portable.

I'd look at a ThinkPad Edge if you're going to be on Windows most of the time. The CULV ones have some decent battery life.
M

If your CS degree requires a windows computer, I would run away lol.

A mac should be fine. I would get the student version of Office to go with it because you can easily find ACM/IEEE journal templates to write your papers with.

I also needed a copy of VMware, not for Windows, but for linux. We were hacking on the linux kernel in one of my classes and it was so much easier rebooting a vm when I hosed something up rather than rebooting the whole machine.

My school also had a deal with MS where CS students basically had 'free' MSDN accounts. I did load Win7 into a VM but never used it for school.

Where I work, we do a lot of web development, on PHP, Java, MySQL. We also run a lot of specialized apps, some in C++ and a veriety of other languages.

The office started out an all-PC shop, even down to the web servers. Now, the servers are primarily linux-based, with a majority of desktop systems being mac. Most remaining non-Apple hardware is either running Windows XP (for legacy purposes) or linux, either ubuntu or SuSe. I have both a Mac and a linux desktop in my office, along with my macbook pro.

Bottom line: I started switching to Mac in 2007, and haven't had a need to use Windows, at all, starting about mid 2009. When I first started I was half and half, and then started using Windows less and less.

If the work you're doing is web-based, it really doesn't matter what platform you're using, though it tends to be easier if you match the platform of the web servers you're developing for. Right now, the majority is *nix-based, and that means a mac would be right at home.

Otherwise, it's best to match the platform that the university expects to teach you on. Check with the their department, see what the professors use. If they're using linux or mac, then a mac would be perfect. And if it's windows, you can still bootcamp or virtualize windows on your mac and do what you need to do.

From what I've seen, lots of universities are very mac friendly. The exceptions are disciplines like Law (at times), Business Administration, and sometimes Medicine, which in some cases standardizes their curriculums to software running on Windows.
W

Get the MBP 15" if you'll be programming threaded or multi-core programs. I do heavy computational modeling and prefer, hands-down, OS X. You'll be able to do 99.9% of the things you need for a CS degree in OS X.
E

Lets see in my schools CS department nearly 50% of the professors/grad students/TAs/Students use Apple machines and the rest use thinkpads or dells.

I think you'll be fine.

This is all good good news. I also emailed the chairman of the dept. and he said,

"Many CS students here have macs. I also pretty much exclusively use
macs. The great thing, in my opinion, about getting a mac today is
that they are good machines (albeit a bit spendy) and allow for both
windows (e.g., using boot camp) and OS X operating systems. Also,
since it is based on free bsd, you get all of the unix tools
(including g++).

Looking forward to meeting you this fall! Let me know if you have any
additional questions, etc."
H

Mac is the only system in which you can run all three major OS branches (OSX, Windows, various Linux distros).

hypermog said:
Does anyone in America say "uni" or are you all from other countries
Click to expand...

I say uni when others use it.

As a long time Mac user I wish I could say buy a 15" MacBook Pro, but I cannot. I just got mine, and I believe it's an unusual example, as it runs very warm but not HOT, as everyone of my five friends identical MacBook Pro's do. We all bought ours at the same time and mine is the only one that doesn't get smokin hot. Especially if you need to run the occasional windows program, since they run so hot they go black and shut down. I couldn't believe my eyes as I watched this happen. We do 3D Aerospace design and mine is the only one that will run OS X for ten hours without overheating. I'm very surprised at Apples complacency and seeming disregard for this problem. Otherwise it's a great computer. Had I not gotten lucky to receive a machine that runs cool I would walk away from them. Do your research & you will easily verify what I'm reporting.
S

Some of the things you do in colleges would NOT be supported in OSX, perfect example is: OpenCV, you'd have to port it to OSX to use it. Other less major things would be their reliance on some frameworks that are built for windows, such as Glut, which you might or might not be required to use, depending on which college you are in.

And I don't think you'd need to buy Mac version of Office for writing papers for IEEE or ACM, as latex would be more ideal for arranging formatting, graphics, formulas, and graphs, and is offered free for OSX. As for other things such as word documents, excel spreadsheet, or powerpoint, they can be done using open office.
S

If you can't stand math, you're going to have a hard time with a CSSC degree. Be prepared to take Calculus I & II, Matrix Algebra, Statistics, and pre-reqs of math (College Alg, Trig, Pre-Cal) if needed. If you don't like science either than perhaps you may want to switch to a CSIT degree. A CSSC degree requires a lot of science and math, a CSIT degree requires little math (Math1130?) and little science. Do some research on the different types of degrees.

Prepared to get slated by every other computer geek that probably hasn't seen the day of light in years.

When I mentioned I'm getting a macbook, almost 90% of them went "ewwww mac" Linux pwns all.
W

Look at it this way. With a macbook you could code and test for all three major platforms (OS X, Windows, Linux) on a single machine without any hackintoshing required.
You must log in or register to reply here.
Share:
Facebook Twitter Reddit Email Link

A
MacBook Pro 13" 2020 screen freeze for few seconds upon opening the lid?

Yesterday at 7:19 PM
ctjack
C
Register on MacRumors! This sidebar will go away, and you'll see fewer ads.
Sign Up
Top Bottom