As of lately I've been experiencing some problems with my USB ports. They work, and they're recognized by my computer and all, but something isn't right, and I have no clue what it is.

I know it's my USB ports and not my devices or their respective cables because the issue is on-going with everything I plug into my two ports.

My problem is basically that when I plug something into my port all the way, it won't be recognized. I'll have to leave it there for up to a minute for it to receive power, and be recognized by the system. However, if I slightly wiggle it up or down (after it's been recognized), it'll lose power and will come back when I stop touching the cable. This poses a big problem because as a laptop, it's meant to be mobile and sometimes cables move around or get tugged on and what not.

I've found somewhat of a solution to my problem, I can plug in a device about half way and then it will connect immediately, and even if I wiggle it up or down, I have no connection issues. However, if I plug in my hard drive halfway it will receive power, start spinning, and light up, but won't be recognized by the computer.

This is what I'm talking about with the whole "halfway" thing: 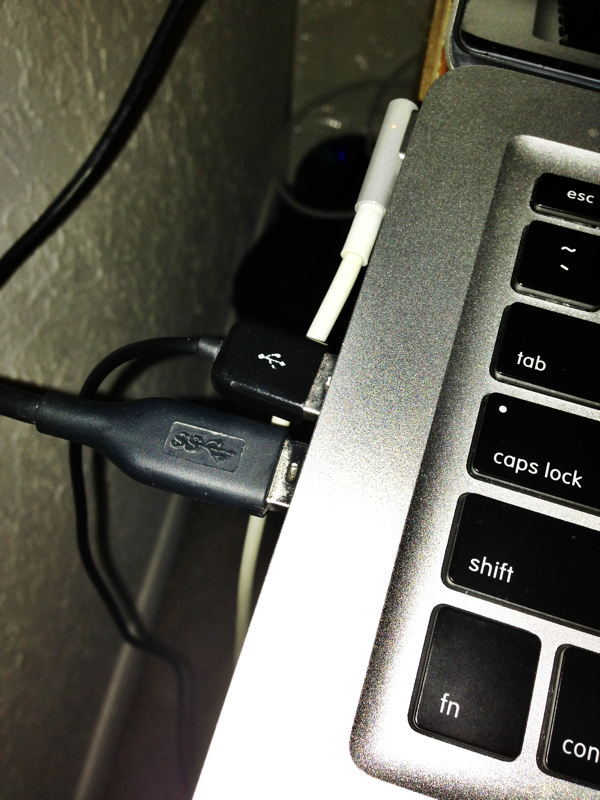 If I leave it like that, my iPhone for example will receive power and be recognized by the computer immediately, and so will my hard drive, but the hard drive will not be recognized.

I've also noticed that one port, the one next to the SD card reader, has a much higher chance of recognizing my hard drive than the other port.

I don't know what this problem could be, but it sounds like something that should be fixable (since it still works and it isn't dead). I'm comfortable with opening up my computer, so if anyone has any possible solutions or ideas as to what may be going on, PLEASE, please drop me a line!!! I was just getting used to the idea of using this computer for another year after installing 8GB of RAM in it two days ago.

It was honestly fine and acting completely normal, then this started happening. I really don't know what could have triggered it to act like this

First thing I'd do is use a different cable...They can die without any visible damage.

Assuming you have tried that idea, can you run the AHT? ( Apple Hardware Tests):

Might give you an idea, although I think my next step would be a non-destructive ( don't erase) re-install of OSX.
S

Well I have tried out different cables and devices lol, so that's not the problem. I wish it was!! Let me try out that test.

EDIT: My drives are recognized by System Profiler and whatnot.

Could be dirty contacts. Cleaning them shouldn't be too hard to do, and is a fairly quick thing to rule out as a cause.
S

duervo said:
Could be dirty contacts. Cleaning them them shouldn't be too hard to do, and is a fairly quick thing to rule out as a cause.
Click to expand...

How would I go about cleaning them? I already tried rubbing a Q-Tip in there but stopped because I didn't feel comfortable.

Q-Tip is much too large. Get some flat toothpicks (not the round kind) and some alcohol swabs. Fold a swab around the wide end of the toothpick and use that to clean the port out.

You can get both for dirt cheap at any Walmart.
S

duervo said:
Q-Tip is much too large. Get some flat toothpicks (not the round kind) and some alcohol swabs. Fold a swab around the wide end of the toothpick and use that to clean the port out.

You can get both for dirt cheap at any Walmart.
Click to expand...

Oh that sounds really good! Thank you! I hope that works. It makes sense, that could be why contact further in is a problem.

If anyone else has any suggestions I can use all the advice!
S

So I did the alcohol thing and I'm still having issues... Anymore ideas guys?
S

Compressed air to blow out the ports?

Is it possible you've bent the connector at the top of the USB? (the white male part) Might not be so tight at the back if you've bent it up or down.
S

I guess the compressed air is a good idea, but looking in there, there's really nothing in there at all.

How would I be able to tell if I bent my USB ports? I mean everything looks quite fine actually.

I've noticed today if I plug something into the one next to the SD card slot, and I plug it in all the way then press up on the device's plug, my MacBook will pick up the connection AND keep it until I touch the plug again, or I unplug the device. The other USB port however doesn't react like this. This trick has no effect at all on it.

Maybe it could in fact be bent? But both of them at the same time? It sounds fishy to me.

This really does suck, it's clearly a hardware problem and it's not like the USB ports can be replaced. The WHOLE logic board has to be swapped out, and that plus labor is almost the cost of a new MacBook Pro.
You must log in or register to reply here.
Share:
Facebook Twitter Reddit Email Share Link
Register on MacRumors! This sidebar will go away, and you'll see fewer ads.
Sign Up
Top Bottom