Hi, I've got a new mid2012 MBP with the 2.9ghz i7 duo core. I upgraded the RAM to 16 gb, 1600 DDR. I've recently installed SMC Fan Control to kick up the fan when playing games. I was curious as to how much stake I should put on the temp monitor that runs at the top of my display.

The other day I was web browsing and listening to music when I noticed the temp jump up to around 77-80 degrees. When I saw this I checked iStat pros temperatures, which seemed normal for running the MBP for a few hours on the web. When I went back to web browsing the temp started to drop back to around 55-60 degrees, which struck me as odd. No programs were using up a lot the CPU, and the temp had just spiked for a few minutes.

Likewise when I play games it will often get up to around 90 degrees, which I believe is normal. Should I make anything of this, or should I even trust SMC FC's temp monitor?

Your temps are perfectly normal. The Intel processors used in Macs are designed to automatically shut down to prevent damage if they truly overheat. CPU Tjmax = 105C (221F), GPU Tjmax = 100C (212F) on i3, i5, i7 processors. (Source: Intel)

Thanks for the copy and paste, but I already know all that. 80 degrees when web browsing is not perfectly normal...

Jewsy said:
Thanks for the copy and paste, but I already know all that. 80 degrees when web browsing is not perfectly normal...
Click to expand...

Okie doke, I wasn't too concerned, but I've never owned a mac before so I was curious. Thanks.

Those numbers seem normal to me. Decoding web video is CPU/gpu intensive.

If you are concerned about temperature and want to reduce it elevation of the rear of the machine helps, as sitting flat on the desk only reflects the heat back to the base of the Mac. You can buy passive aluminium coolers like Rain Designs Mstand or iLap. Most powered coolers are designed for PC notebooks and don't work overly well with Mac`s if at all. One cooler that does work efficiently is the Moshi Zefyr 2, as it`s principle of cooling is specifically designed for Apple portables, by blowing the air horizontally across the base of the computer, however don't expect miracles. 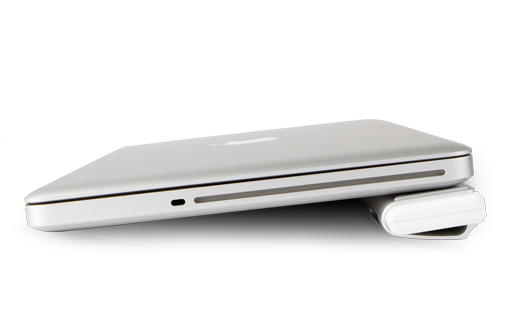 Link: Moshi Zefyr 2
A cheap USB fan can achieve the same if strategically placed, not as elegant mind, nor as easy to put in your notebooks case but they do help to reduce case temperatures.

You can use software to override Apple`s own cooling algorithm by manually taking control of fan RPM and setting up power profile presets with SMC Fan Control 2.4, or here with UltraFan which allows you stipulate a preset temperature and the software will automatically raise and lower fan RPM`s to keep the system at the predefined temp, which i personally feel is a far more elegant solution. At the end of the day you want to control your system temperature, not your fan rpm`s. For me SMC is now pretty much redundant with the latest release of UltraFan having manual control of the fans RPM, and subsequently i am starting to uninstall it from my own Mac`s. SMC FC is a great app, however although it`s recently updated, functionality is limited compared to some newer apps, equally SMC Fan Control is rock steady stable and a finished product.

Strictly speaking Apple`s own cooling algorithm works, albeit at sacrifice of increased temps for quieter operation. This has always been the Apple way and is really nothing detrimental to the system, i have one MBP from 2008 all original barring a recent fan change that has an uptime of over 30K hours. The latest MBP`s need less assistance in remaining cool; for some it`s simply disconcerting the heat generated and transferred to the case, although it`s perfectly normal as the aluminium acts as a heat-sync. i have to deal with elevated ambient temperature so at times a software solution is useful. Apart from the passive cooling the Mstands bring they also offer a very sound ergonomic solution. A passive cooler and UltraFan will maximise the cooling, there is little else you can do short of reducing the ambient temperature or the system load. If I know i am going to push a system i will close all apps that are not essential as this can and does make an impact to system temperature.

High temperatures in general is not overly harmful to your systems, what is far more detrimental is thermal stress, where temperatures rapidly fluctuate by significant margins over a short period of time. Anyone striving for great longevity should look to minimise rapid temperature changes, here UltraFan is your best friend.

Using a RainDesign Mstand, a Moshi Zefyr 2 and latest version of UltraFan I can reduce temperature by over 20C when transcoding an MKV video file, and that is something worth thinking about;


The old adage still applies; it`s easier to keep a system cool, than cool-down an already hot machine. This being said it`s not strictly necessary, equally it`s nice to know that there are options for reducing temperature out there.

Jewsy said:
Hi, I've got a new mid2012 MBP with the 2.9ghz i7 duo core. I upgraded the RAM to 16 gb, 1600 DDR. I've recently installed SMC Fan Control to kick up the fan when playing games. I was curious as to how much stake I should put on the temp monitor that runs at the top of my display.
Click to expand...

The architecture of Ivy bridge (IVB) is significantly different to the previous quad cores, this also reflects in the temperature monitoring and your systems values are pretty much standard from what i have seen. SMC Fan Control has always been very accurate and stable, under IVB the program does look to report a higher value in comparison to an equivalent 2011 Sandy Bridge machine. This is more to do with the CPU`s sensor arrangement than actually running hotter, so there is no concern.

Take a look at UltraFan the app will go a long way to solve any cooling concerns/issues. Apples own algorithm balances temperature and noise output this has always been the way with Mac`s, and there is nothing inherently wrong with this approach, the trade off is elevated temperatures for the predominantly silent operation.

UltraFan allows you to define the threshold when the fans will spool up, typically on a 2012 Retina fans will begin to ramp up at 90C and greater, by pre-setting UltraFan to 70C fans spool up sooner and in general reduce system temperature, the obvious trade off here is higher levels of audible intrusion.

From my observations; if you push a Quad Core i7 sooner or later the fans will spool up to the point that they are noticeable, so i would rather they spin up faster for shorter periods and help to stabilise system temperature. As stated previously large fluctuations in temperature over a short period of time is detrimental to electronics and as such thermal cycling is frequently employed in environmental stress screening of electronic packages albeit at the cost to longevity.
You must log in or register to reply here.
Share:
Facebook Twitter Reddit Email Share Link
Register on MacRumors! This sidebar will go away, and you'll see fewer ads.
Sign Up
Top Bottom