I have a late 2013 Macbok Pro Retina. According to Apple the machine supports 4K display at 60hz on displays that support Multi Stream Transtport (MST) as outlined in this link

The problem is I have no way of knowing which current monitors support MST as the few I have researched have no mention of MST or SST support in their specs or user manuals.

One screen I am looking at is
http://www.samsung.com/uk/consumer/it/monitor/professional-monitor/LU32E85KRS/EN

Can anyone suggest a screen they know works with my laptop?
Also any feedback on performance of this laptop on 4K screen with MST?

I have called two suppliers and Samsung multiple times and no one can tell me if the monitor supports MST. Not sure how I'm supposed to buy a screen that I know will work. I'm in Australia and return policies are pretty bad here.

Still dealing with Samsung as they don't even seem to know if the screen will work.
Has nobody in this forum had any experience with rMBP Late 2013 and 4k screen?
F

Which screen are you using?
So Apple's website is incorrect stating it will only work with MST?
Also what scaled resolution options are you getting?
Thanks
Last edited: Dec 1, 2016

Nick7373 said:
Which screen are you using?
So Apple's website is incorrect stating it will only work with MST?
Also what scaled resolution options are you getting?
Thanks
Click to expand...

All the regular 4k options, I use looks like 1080p
Reactions: trifid

Thanks for replying. Not sure what all the regular options are for 4k as I have not used before. Is there something in between 'Looks like 1080p' and native 2160p?

Nick7373 said:
Thanks for replying. Not sure what all the regular options are for 4k as I have not used before. Is there something in between 'Looks like 1080p' and native 2160p?
Click to expand...

Yes, when you option-click on "Scaled" it'll show more options. Very very useful, this is my current setting and I find it the best setting for my 4K 27": 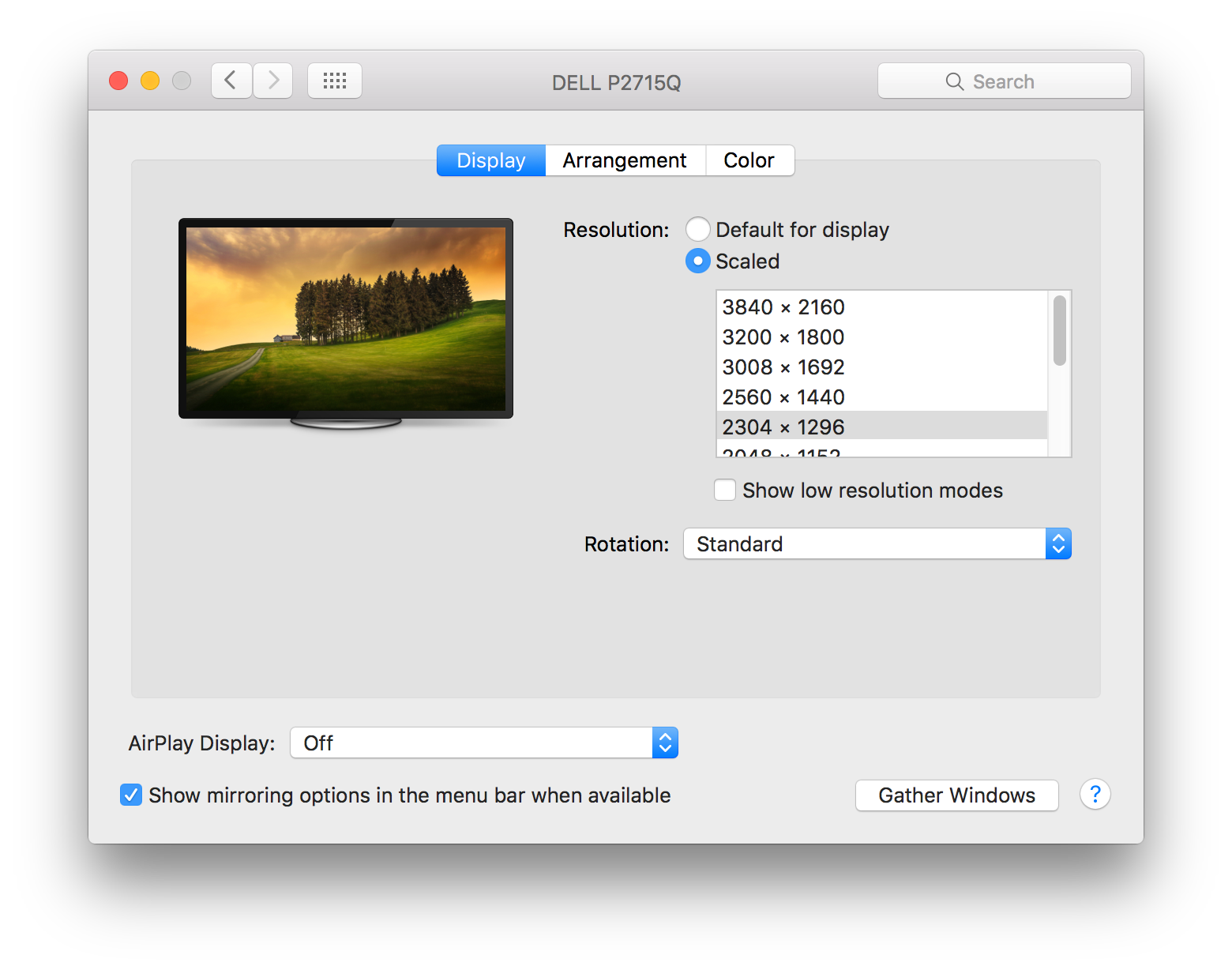 trifid said:
Yes, when you option-click on "Scaled" it'll show more options. Very very useful, this is my current setting and I find it the best setting for my 4K 27":

Thanks for the screenshot.
How do you know the screen is running SST?
Could it be an automatic implementation of MST?
[doublepost=1480685980][/doublepost]

What is MST set to in your monitor?
Sorry for all the questions but I am about to buy an expensive screen with no return policy and I want to make sure it works.
Many thanks
F

Nick7373 said:
Thanks for replying. Not sure what all the regular options are for 4k as I have not used before. Is there something in between 'Looks like 1080p' and native 2160p?
Click to expand...

Yeah the screen looks similar to the one for the internal screen. I use "looks like 1080p," which is native at 60hz on the panel but everything onscreen is scaled. I know it is running properly because my monitor has a menu to show current resolution and hz. That's the middle option, and there are 2 more to the right that will have smaller text, etc. Native 2160p with no scaling is not an option available in OSX just like on the internal screen, but you can force it with third party apps. I found a free one called RDM that lets you change the resolution to anything the monitor and software supports.
F

Also reporting in with success with 4K over SST here. I used a Dell P2415Q and P2715Q with my Late 2013 MBP Retina 15", in 3840x2160@60hz over SST with a single Mini DisplayPort to DisplayPort cable included with the monitor. It actually supports two monitors both running at 2160p 60hz at the same time out of both ports, if you so desire - but I did notice a little more slowdown and increased heat. This was my daily setup for about a year until I just upgraded to my Hackintosh + 2016 15" setup.

You can set the monitor to MST in its config panel and I believe it continues to work fine (or it may switch to 30hz, I forget - but SST works perfectly so no reason to). My monitor gives three options above "looks like 1080p" up to and including a "looks like 3840x2160" mode that was simply native res, all at 60hz. Not sure why the options slightly differ on others' machines, but at the end of the day the Dell displayport-equipped 4K monitors are going to work at 60hz over SST on the Late 2013.

:Edit: If I remember correctly now, it was the P2415Q that didn't offer an unscaled "looks like 3840x2160" mode directly in the preferences, but the P2715Q does. I think macOS is looking at the reported size of the monitor and comparing it against the pixel density of the native resolution and then making a determination whether it'd be practical for the user or not to have a full unscaled mode available easily.
Last edited: Dec 2, 2016
Reactions: trifid

Thanks guys for your help. I picked up my new screen today
http://www.samsung.com/uk/consumer/it/monitor/professional-monitor/LU32E85KRS/EN
It worked straight out of the box at 2160p@60hz. All good very happy. Didn't have to play with any setting so yes it does support SST. Apple should upgrade their website so others don't end up getting confused. There is VERY limited information easily available regarding this. Not even Samsung could tell me if it would work going on what Apple's website says.
Last edited: Dec 3, 2016
M