One of the new features in macOS Sierra is tabbed windows throughout the operating system, bringing a feature that was once limited to Safari to all Mac apps, first and third party.

In apps like Pages, Keynote, and Numbers, when you work with multiple documents, there's now an option to organize them into separate tabs instead of separate windows. This feature is available in most first-party Apple apps, including Mail, Maps, TextEdit, and more. 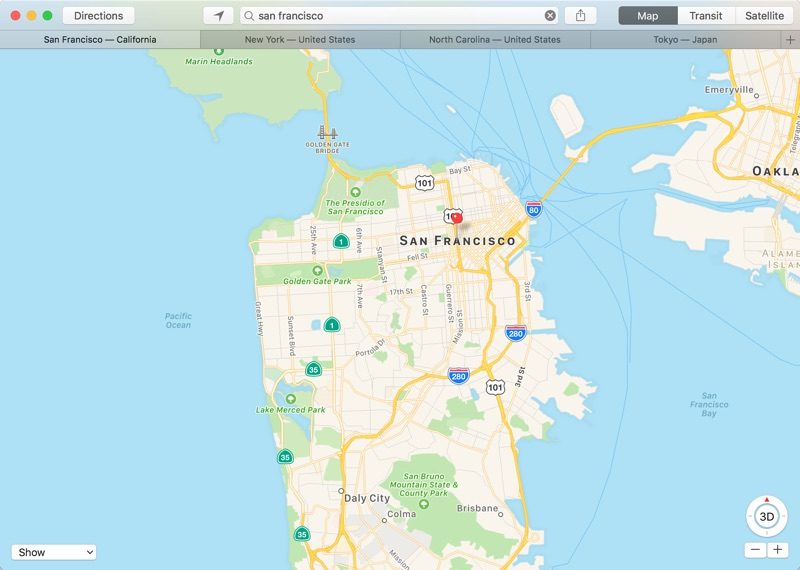 To use the new tab feature in an app that supports it, whenever two or more windows are open, choose the "Window" option from the menu bar and select "Merge All Windows." The individual windows will become a single window with tabs to switch between files.

Tabs in apps work just like tabs in Safari. In Apple's apps, Command + T will open a new tab automatically, as will the "+" button, and tabs can be dragged out into their own separate windows.

In some cases, third-party apps will automatically support tabbed windows, but for other apps, developers may have to make some changes to enable it. Text editing app Byword, for example, now has an option to combine all open windows into a single window with tab, and other apps will soon follow now that macOS Sierra is available to the public. 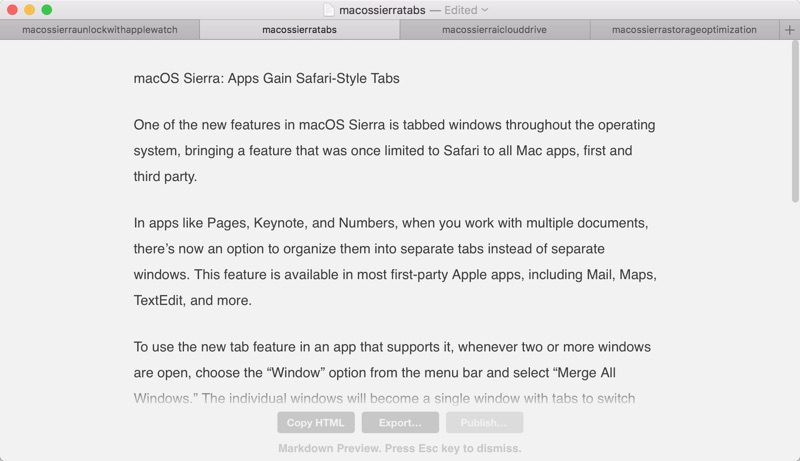 macOS Sierra is available as a free download from the Mac App Store starting today. For more information on the features included in the latest operating system update, make sure to check out our macOs Sierra roundup.

Command + T in TextEdit does not open a new tab for me. It brings up the font menu.
P

Why do I need multiple tabs if I'm not even going to use one tab.
C

itsthenewdc said:
Command + T in TextEdit does not open a new tab for me. It brings up the font menu.
Click to expand...

This has always been the case, and I wonder how they solve it in Sierra.... maybe Cmd-T will no longer be mapped to the Font window. I wonder which keystroke will replace it, if any? I find it very useful in certain apps, but I can see how it's more of a power-user keyboard mapping that Apple would be willing to sacrifice.

You should be able to re-map any of your apps through the Keyboard Preferences panel.

Not really a massive feature worth writing about. Tabs in Maps? I still use google maps.

Yeah they've pretty much had it, this entire time. Been calling it "windows".
E

jonnysods said:
Not really a massive feature worth writing about. Tabs in Maps? I still use google maps.
Click to expand...

I had no idea that tabs were now available in all apps. Typically I have about 10 different Pages windows open. 1 for each document I am working on. Using tabs within pages is AWESOME!!! I'm thankful they wrote about it.
Reactions: Keane16
M

ThunderSkunk said:
Yeah they've pretty much had it, this entire time. Been calling it "windows".
Click to expand...

I haven't really touched Windows in a few years now.
Has it actually got tabs built in? So apps like Word/Explorer/Outlook etc?

I did a quick google for it, but could only find third party tools which add the functionality.
E

For years I have used applications with tabs, many of them made by Adobe. Sometimes its nice, while other times, it an annoyance if it is the only way to view the documents in an application. Sometimes I want to compare the content of two open documents side-by-side. Is that possible with the updated Sierra applications?