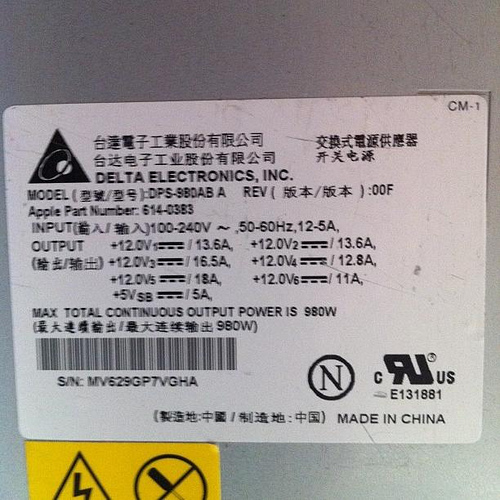 Allegedly its 100% working, except for the PSU.

Is that compatible?
B

shanghailoz said:
Allegedly its 100% working, except for the PSU.

I realize it is too late now, but you really bought all of that stuff, without knowing if the computer was even salvageable? What if the power supply, motherboard and GPU were all dead? That would be over a $1000 right there to get a 6 year old computer working! Major gamble in my opinion....
S 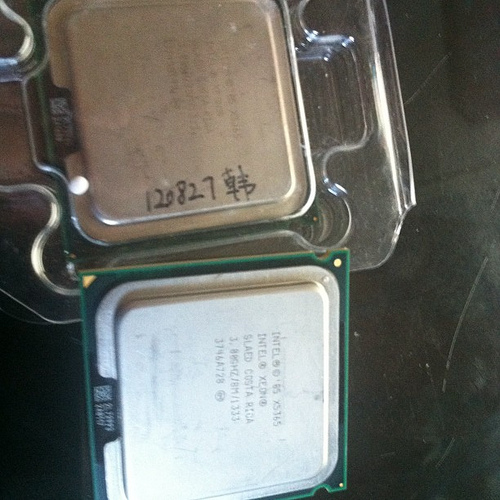 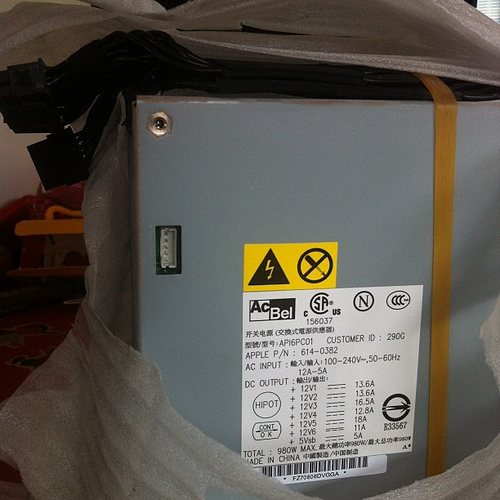 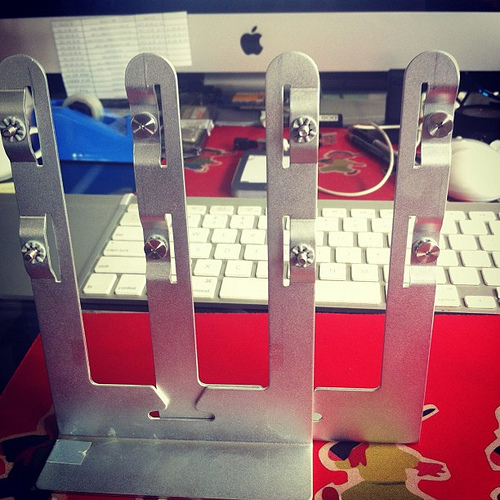 I don't mind spending that, worst case I can use elsewhere.
I figure its worth about $2000 when done, and total investment is $1000, so I'm getting a decent computer for that vs a hackintosh. 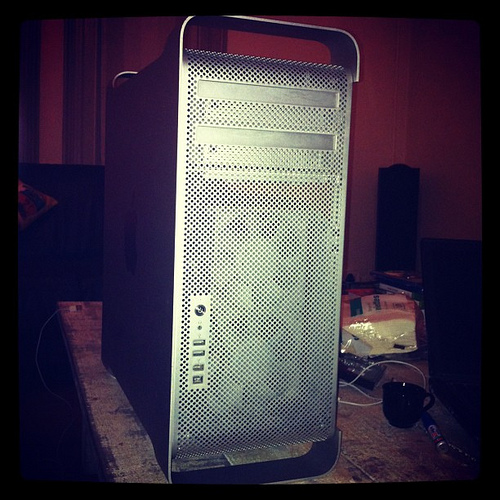 You misunderstood. If everything was shot (including the motherboard) you could easily end up spending over $1000 to just get it working. I wasn't stating that your upgrades would cost $1000..... The fact that you bought all the upgrades before you were even sure it was the PSU was a little overzealous. I would have replaced PSU and get it working in its base configuration before I would ever spend money on upgrading.
O

paulrbeers said:
You misunderstood. If everything was shot (including the motherboard) you could easily end up spending over $1000 to just get it working. I wasn't stating that your upgrades would cost $1000..... The fact that you bought all the upgrades before you were even sure it was the PSU was a little overzealous. I would have replaced PSU and get it working in its base configuration before I would ever spend money on upgrading.
Click to expand...

I'd be inclined to agree. Better safe than stuck with a big money pit.
S

Why are you all so concerned?

Worst case, I get another motherboard (logic board), not a big deal for me.
About 1500rmb in China for that era board. It will be a sigh, damn it, but not a huge issue. Shipping is more the issue there, as I'll be back in Cape Town for 3 months, and I'll be tempted to DHL one over at exhorbitant rates if its necessary.

I've also gotten the bluetooth module for it (RMB50).

The seller guaranteed that it worked, except for the PSU. I took a look at the psu, and its a bodgy fix someone attempted, and I didn't have the tools or time to fix it in Cape Town. He's interested in buying parts off of me as he has another 3 or 4 units, and South Africa is a tad more expensive than the rest of the world for things Apple than most places barring Brazil.
He also offered to show me it working with his power supply, as he had 3 other MacPro 1,1's in the car when he dropped off the broken one.

I'll be back in Cape Town next week, so can see if I'm ok. Again, not overly worried. I only paid R2000 for the machine.

The unibody is 600 to fix (water damage - fix board components + new keyboard), and will go to my dad once I'm back in SA.

The Mac mini I'll find out tomorrow, but I think < 100 to fix as its power related on the board.

shanghailoz said:
Why are you all so concerned?

Worst case, I get another motherboard (logic board), not a big deal for me.
About 1500rmb in China for that era board. It will be a sigh, damn it, but not a huge issue. Shipping is more the issue there, as I'll be back in Cape Town for 3 months, and I'll be tempted to DHL one over at exhorbitant rates if its necessary.
.
Click to expand...

I'm not concerned. It's not my money. Simply trying to pass on what I feel is a best practice especially since I have made the same mistake in the past "oh seller says it is only X" and in the end it turned out to be "X, Y, Z" and by the time all was said and done I spent as much as just buying new.
S

I do this sort of thing a lot, and haven't really had too many issues.

I've fixed at least 6 Macbook Pro's in Cape Town all bought broken, and my family is relatively happy with their computers, as I tend to spread them around to those in need as gifts. This is my first Mac Pro though, and I don't mind wasting a little bit of money making a "dream 1,1 machine".

I can source parts cheaply in China, and my background / business is computer / IT related, so its not an issue for me to use parts elsewhere if necessary.

In this instance, the sale value of the parts in the machine already make it worthwhile for me, as I can part out the current bits for enough to replace board and other components if necessary, especially if I do so in South Africa vs China.

If I have to redo it all excepting case, would be about 1300$, which is still way less than it would cost to get something equivalent there secondhand.

I've weighed up my options, and I think making older equipment work is both a decent thing to do (for the planet if nothing else), and for me.
S

The rest of the parts arrived, so now I just need to wait till next week when I'm back in Cape Town to see how it all works. 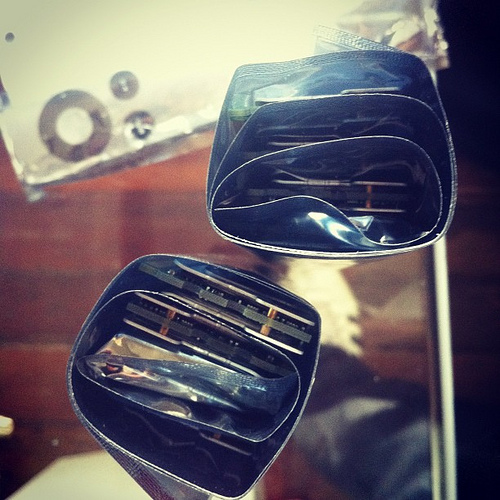 (which is the most expensive part of this!) 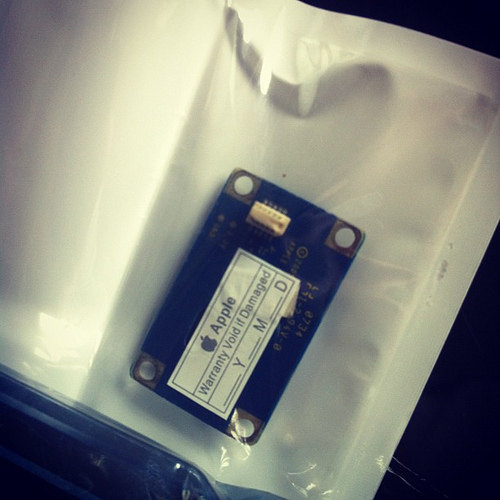 
Wifi card, I have a bazillion of, so don't need to order. I bought a bunch a while ago for use in Dell Mini 9's, still have some stock. I got a really good deal at the time (rmb 20 or so each, and I bought 10). 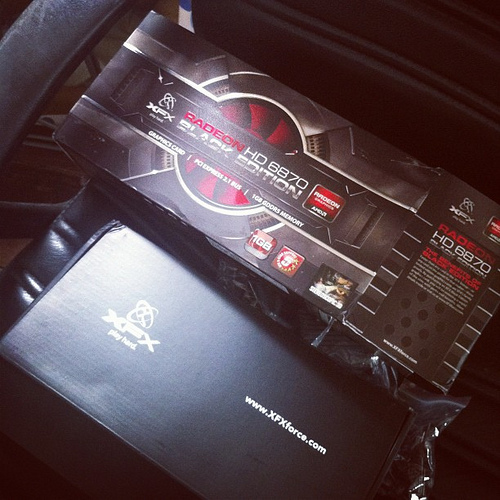 Its a 6870 - supported by Freya for Flashing if I so feel, and natively supported in ML*. Should be "adequate for my needs" bwahahaha.


*Yes I know ML is not "supported" on the MP 1,1 but it is doable with a bit of kicking and screaming.

I also bought a couple of remotes 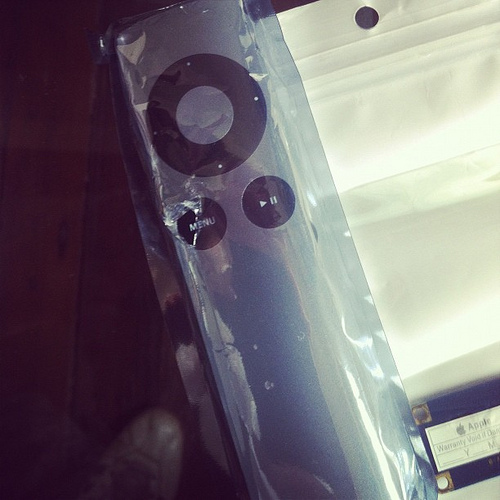 Will have to use an icky dongle on the MP, but at least I'll have a complete setup now, like Jobs would have wanted.

OS HDD is going to be a spare 256g I have lying around from an Air drive upgrade.

Considering shlepping back a shanzhai apple 27" screen to Cape Town, but they're heavy, and I already have a 3m automated projector screen I'm taking, so my weight limit is a bit iffy already.
S

Well, got back to Cape Town.

Replaced the PSU.
Plugged in power, got a chime, so was happy.

The original GFX card booted, but was a bit shot (bad ram i guess, as glitchy pixels etc), so glad I bought the HD6870.

Installed Lion onto the SSD, plugged in the bluetooth, and the extra ram.
32g generates a *lot* of heat!

Seems to be quite stable - as in works ok.
Next step is to replace the CPU's then check out the results in GeekBench.

Pleasantly surprised by the lack of noise - haven't actually owned a Mac Pro till now, its definitely well built!

You really have to struggle to hear that its turned on.

This is a quick shot with the side off. 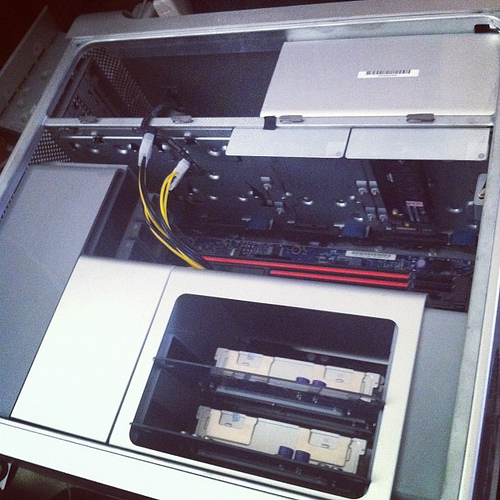 I need to order the small 6pin -> 2 large pci-e cable for the GFX card, so its neater, for now I have sacrificed the DVD ones. Have one of the below coming later. 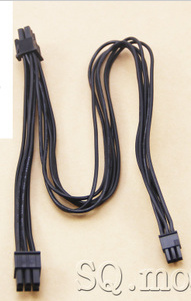 I rerouted the PCI power cables through the bottom now, using 2 x extension cables, and slotted back in the DVD drive. though, since I had easier access to the underparts 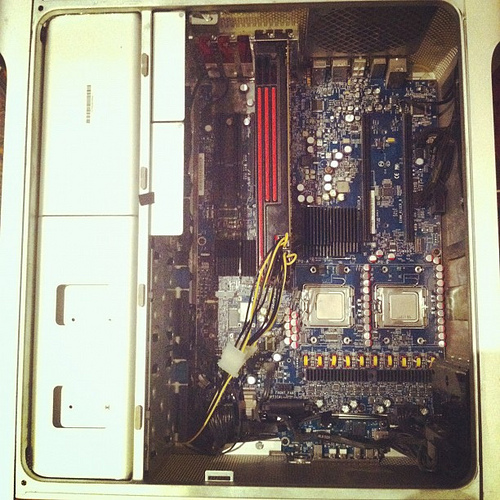 Mac Pro 1,1 getting a CPU upgrade by sheedl, on Flickr


Hopefully it all starts up nicely tomorrow when I get hold of some heatsink compound.

Here are some shots of the inside, for fun. 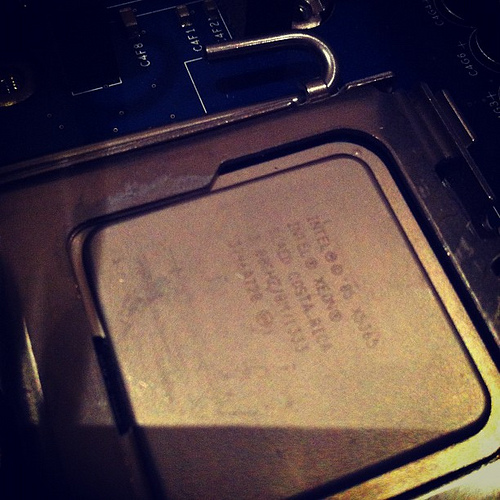 ..and scratch the tomorrow idea, I found some excess compound on on of the hifi components I also have in my repair pile. 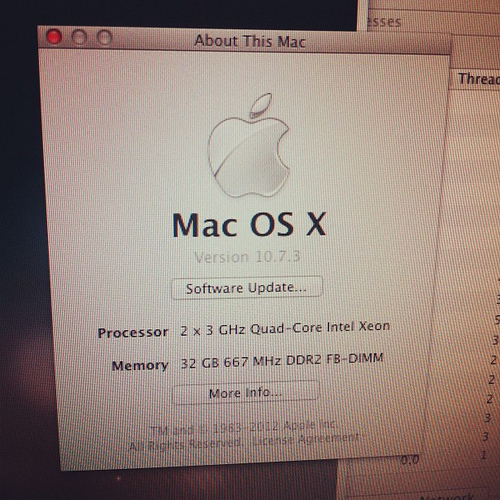 Geekbench score doubled, and its now a mean machine

Sadly, I'm going to see it go tomorrow, as someone already answered my ad for it, and its sold.

Till the next one!
S

Well, sold the first one for a nice tidy sum.

...and bought another one - in much nicer condition, together with 2 x Cinema 23" Displays.

I'm going to upgrade the bejeezus out of the second one also, and possibly sell it depending on funds.

I'm also in Shanghai (assuming that's where you are based on your name) and have a Mac Pro 1,1. I've made similar upgrades to the ones you describe in this post and am on my 2nd power supply. Sadly, it's just died again (at least I'm 99% sure that's what it is because apart from some occasional relay clicks, I get nothing when I try to power it on). Do you know anywhere locally that I can get another one - or do you have one? I basically just want to keep it going until such time that I can purchase a new one, IF Apple ever get around to releasing the new one! I'm reluctant to take it back to the place I used at Lujaizui last time as they had it for AGES and it hasn't lasted that long since they 'fixed' it for me.

I couldn't find a way to PM you, so apologise for this personal request on the public forum.