Macphun, the company that makes several popular photo editing apps for Mac and iOS, today updated some of its Mac apps with support for OS X El Capitan and the new Photos extension. In OS X El Capitan, third-party photo editing apps from the Mac App Store are able to share their tools with Photos, making it possible to edit images with these apps without ever leaving the Photos app.


Third-party editing capabilities have been available in iOS for quite some time, but are new to El Capitan, which was released to the public yesterday. Four Macphun apps are now able to be used within the Photos app on OS X El Capitan, including Noiseless, Tonality, Intensify, and Snapheal.

Noiseless ($14.99) is an app that removes noise or graininess from photos, while Tonality ($17.99) can be used to turn images black and white. Intensify ($14.99) enhances detail within images by increasing the sharpness, and Snapheal ($9.99) is designed to remove unwanted objects from images. All of the apps are available from the Mac App Store, and customers who already own them will receive the updates for free. 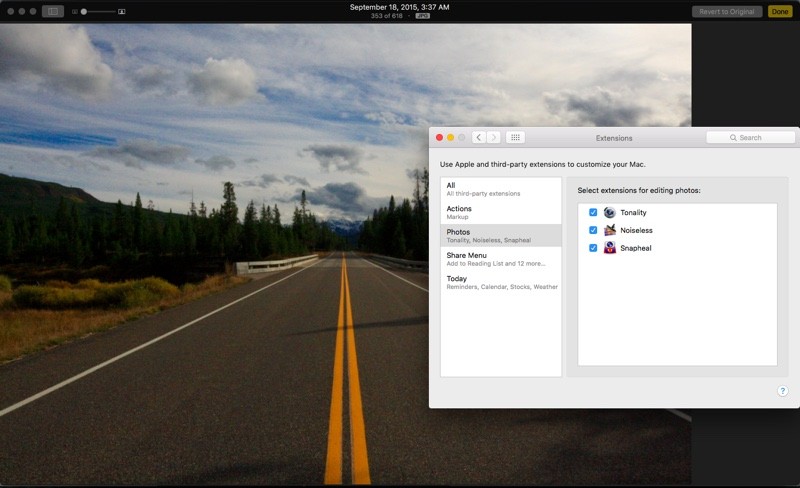 "So many people were left disappointed by the lack of editing tools in Photos for Mac. As photography enthusiasts ourselves, it made perfect sense to improve Photos' weaknesses," commented Alex Tsepko, COO of Macphun. "With Macphun's photo editing extensions, Photos for Mac will finally offer the tools, features, speed and editing quality that its users were expecting. Many of the tools Macphun will bring to Photos are not present in Aperture, Lightroom, Affinity or Pixelmator. We're confident this update will be an exciting element of Apple's eagerly awaited El Capitan."
Click to expand...

To celebrate the launch of the El Capitan updates, Macphun has offered to give away copies of Noiseless, Tonality, Intensify, and Snapheal to three lucky MacRumors readers. Each winner will receive one Mac App Store promo code for each of the four apps.

To enter to win, use the Rafflecopter widget below and enter an email address. Email addresses will be used solely for contact purposes to reach the winners and send the prizes.

Did anyone else misread the title on the sidebar as this?

US only boo!
Z