The post/blog looks a bit tacky, But it's interesting nonetheless. 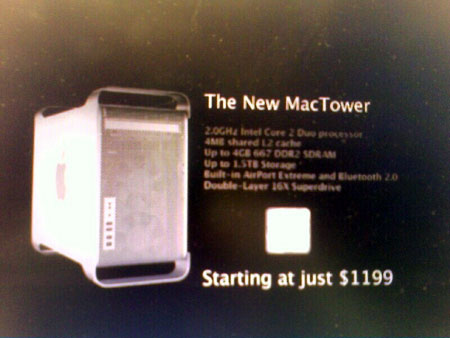 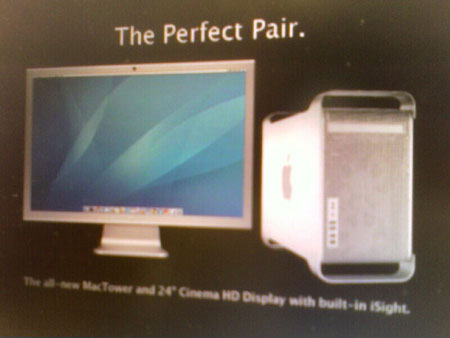 You would think that if they actually had these, they would manage to get good pics.

Two things raise my suspicion. One, the blogger ends his post by saying it is probably just another rumor. But if it really was his friend sending the images from Cupertino, would he be sure it was true? ...or that his friend was playing a trick, but those are the only two options. Not a "rumor."

Second, I'd guess the MacTower would have a different look. Maybe not, but as shown it's a little too convenient for photoshopping.

Suspicious, but could be.

I refuse to believe that anyone would be stupid enough to risk their employment with Apple by doing this (read the actual story on the blog).

I am no photo expert but it looks pretty dodgy. The two together for example dont look like there balanced in the picture - as if they were sitting on an uneven surface.

Given all Engadgets flags about this I would also add - why no shot of this things gutz and yet we get a MacPros?

I wish it were true but it smells of a fake to me. What a shame.
L

The type on the first one is really badly Photoshopped, because the angles are all wrong.

There's no way Apple would show a straight on view of a screen and a ¾ view of a tower next to it like in the second one.

What's with the huge fans behind the grille? The lower one doesn't even fit! What bollox.

Engadget had a rundown of why this is so very, very fake.
1) new blog.
2) friend risks his employment?
3) looks like a powermac g5
4) all the pics are the same angle. looks very fake.
5) new blog.

Now that the iMac is 24", is Apple likely to switch the Cinema Display to 24". Do they use the same panels?

I don't see them actually doing it. But I see them calling it MacTower even less.

More "blurry elevator pics". These fakes are all the same...

The blog owner Jeff, even replies that it is indeed fake.

Lau said:
There's no way Apple would show a straight on view of a screen and a ¾ view of a tower next to it like in the second one.
Click to expand...