Avegant's Glyph headset originated as a Kickstarter project that ended in February, earning more than 1.5 million dollars. The company is showing off the Glyph at Macworld, giving users a first look at the head-worn mobile theater. 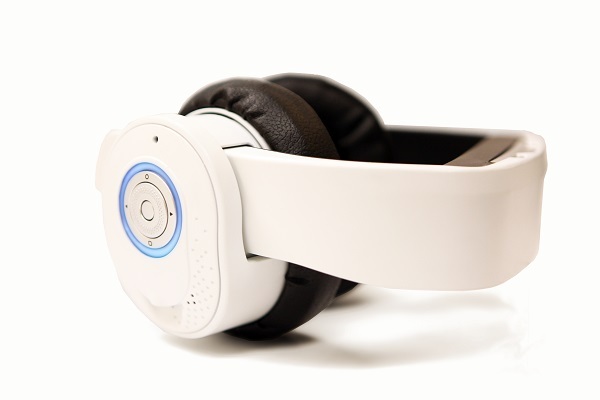 The Glyph, which is currently in the alpha stages of development, is essentially a set of headphones with a built-in screen that flips down for a fully immersive media experience. Rather than using a traditional display, Glyph incorporates a Virtual Retinal Display that uses an array of micromirrors that reflect an image directly onto the retina of the eye, which produces a very clear image.

Avegant's demo headset at Macworld was showing a 3D underwater scene complete with a jellyfish floating around, all of which looked ultra crisp after the headset was properly adjusted to eye width. The image seemed much clearer than traditional 3D images, though the display itself felt a bit small. According to the company, the device is designed to emulate an 80-inch screen approximately eight feet away with a 45 degree field of view.


​
Glyph is individually adjusted for each user and it is even able to incorporate glasses prescriptions for optimal viewing. The company also says that the micromirror technology prevents eye strain and nausea commonly associated with other conventional headset displays.

The product is being designed to work with all kinds of media input, plugging into any HDMI source including iPhones and MacBooks to display video games (complete with head tracking), streaming movies, and more. The final version will be powered via battery, and the company's goal is to have enough battery life for a full-length movie to be watched -- approximately two to three hours.

The Glyph uses a simple HDMI input to display anything in your content library, from the movies that you already own to streamed Netflix over your iPhone to the desktop environment in your Mac or PC. The Glyph is also great for gaming, whether in playing Call of Duty Ghosts on your Playstation or Real Racing on your mobile phone. And with an integrated 9 Degree of Freedom head-tracker, a whole world of interactive gaming, Point of View (PoV) imaging and interactive storytelling is within our reach.
Click to expand...

While the alpha model that is being used for demonstrations is quite bulky and weighs in at 1.5 pounds, the company says the finished product will be quite a bit slimmer. During a demo, Glyph's creators also emphasized its ability to be worn as a traditional set of headphones, flipping down the screen when appropriate, as a way to distinguish it from other headset-style displays such as the Oculus Rift.

Glyph can be preordered for $499 from the Avegant website. The product is expected to ship during the first quarter of 2015.

Pre-order a product, from an unknown company, that won't arrive for another year? Sure just let me hand over my credit card now.

I wouldn't want to be seen in public using it. 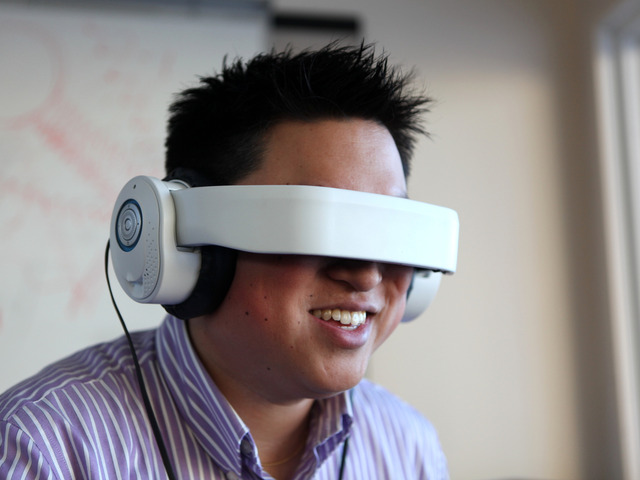 Maybe they can get Geordi LaForge as a spokesman.

dannyyankou said:
I wouldn't want to be seen in public using it.

I recently attended an event where Avegant held a presentation about the Glyph and the technology. Some fact-corrections:

1. It's not immersive. Oculus Rift is immersive, the Glyph is designed not to be. It allows you to maintain peripheral vision under and over the screen. That is good for a couple of things; a) less chance of getting motion sickness, and b) you can use it in environments where you wouldn't necessarily want to put a blindfold on.

2. Avegant didn't originate as a kickstarter. A kickstarter is a way to raise funds, and a lot of things happened before. The technology in question was originally developed for military usage and somebody thought "hey this could be a really great concept".

3. As for "Jimmy James"'s comment: It doesn't burn your retinas any more than the outside world or your PC screen. Projector technology just means that instead of pushing light through an array of colored pixels absorbing the colors you don't want they utilize optics and mirrors in such a way that pixels disappear. Looks very promising IMO.

4. @lewisd25: Google Glass is different. This is a mobile screen, consider it somewhere between Glass and Rift.

I personally think this technology looks very promising. If you don't want to wear it in public, then don't, but I honestly think this is a better way of spending a 30 minute commute on a train or bus than trying to watch something on your phone screen (if that's the alternative). It also holds many advantages over Rift. It uses a standard HDMI-connection which means it already works with everything. Second, it supports head-tracking which means it can easily be incorporated into games that already support headtracking (like many racing games) on normal screens - technically it's just a driver issue. The display technology allows for much faster response times than what we've seen in comparative devices yet.

In any case I think it's important to consider what each thing does and doesn't do. Glyph is a mobile screen, so sharp that you don't see pixels. It's a headset with - allegedly - premium sound. There's definitely a lot of work that needs to be done before this is a product that can be released, but where it is now is already really impressive, and I'm really looking forward to the final product because I think it has a lot of potential and I really hope they manage to get it right!

I just took a dump which Facebook can acquire for $6B.
B 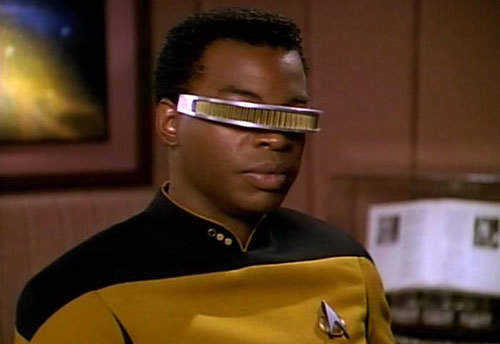 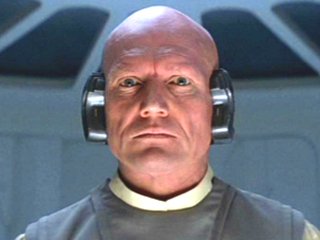 I really really want this. Wont be sitting at my desk anymore. Instead I will sit somewhere in the sun with wireless keyboard and trackpad. YES!
M

I wonder what the long-term effect of staring at a screen so close will be on one's eyesight.

dannyyankou said:
I wouldn't want to be seen in public using it.

They'll need to make this look more stylish, first. It should look more like glasses or Jordi LaForge's headset and less like a pair of headphones that you're wearing wrong.
Y

things that I want Jony Ive to design

In what way is this similar? Other than you stick it on your head?

It's actually really nice to use. Way nicer than an LCD. Will be a great aeroplane headset.


macUser2007 said:
I wonder what the long-term effect of staring at a screen so close will be on one's eyesight.
Click to expand...

It's not a screen. That's the point, it's more like natural light bring reflected and amazingly clear. I've tested the alpha and it lovely to use.
K

I know they said it's going to slim down from 1.5 pounds but anything near that weight sitting on the tops of my ears and nose will be intolerable for more than a few seconds/minutes. It doesn't look cool, but in the end they will need to have an inner headband that stays on top after the viewer-band flips down to minimize the strain on your ears/nose.

Keerock said:
I know they said it's going to slim down from 1.5 pounds but anything near that weight sitting on the tops of my ears and nose will be intolerable for more than a few seconds/minutes. It doesn't look cool, but in the end they will need to have an inner headband that stays on top after the viewer-band flips down to minimize the strain on your ears/nose.
Click to expand...

Yeah, even 1.5 pounds on your head sounds like a lot. That's like balancing an iPad 1 on your head.

This concept is nothing new, the only "new" about it is that they can make use of better techniques and materials that are available now and where not 10 years ago.

Nothing wrong with this product, but personally I don't see myself wearing such a device when I'm in a train, I simply can't get used to the fact that I'll get completely lost in a movie while not able to see what's happening around me. Besides that I think it's even rude when you're in a train watching a movie with this device and have no eye for someone that wants to see your ticket or the people that are going to sit next or in front of you, but that's just me....call me old fashion in that regard....

I could however see myself using this device in a more private situation, like at home watching a movie. The problem there is only that I prefer watching movies on a big screen in my private cinema I've build together with my friends, al that "experience" watching a movie with others or even alone but on a large screen can't be solved with this device. And that's totally ok, it's not made to replace a beamer or to force one and another to buy this thing and start using it, it's just not something for me.