Quick question: regarding the Magsafe 2 charger used in Retina Macbook Pros, is the magnetic plug a physically different size for the 85W vs the 60W?

Thanks in advance.
S

They are both the same size connector and can be used interchangeably however if you are pushing your 15 inch on a 65w charger it may well still have battery use as well. This can happen on the 15 inch with the 85w as well but you really have to be maxing out your system and a desktop may well be a much better option for you at that point.
Reactions: bernuli
K

Now I'm really confused. I have a Magsafe 60W "T shaped" charger that does not fit the charging port on the 2012 Retina Macbook Pro (as seen in the following picture):

Is this not a Magsafe 2?

DangerousDave2k said:
Now I'm really confused. I have a Magsafe 60W "T shaped" charger that does not fit the charging port on the 2012 Retina Macbook Pro (as seen in the following picture): 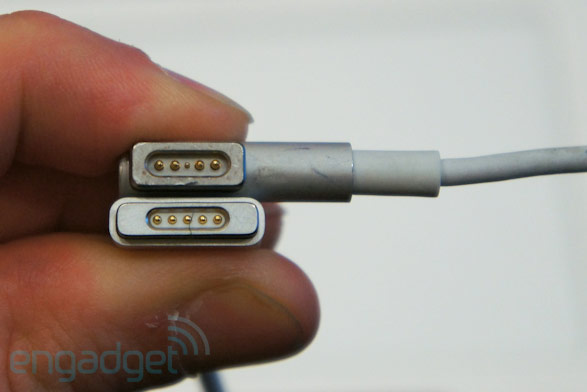 As above you have one MagSafe 1 and one MagSafe 2. You can get a converter for the MagSafe 1 Apple sell them and they are available in many suppliers.

Thanks for your help - for some reason I associated the T design strictly with Magsafe 2, but apparently there are T shaped Magsafe 1 chargers too.

Yep, the magsafe 1 both had a T and L, I always preferred the T shape myself

T-shaped MagSafe 1 predates the L-shaped ones, most notably the white/black MacBooks (non Pros) used T-shape plastic, then later with unibody there was a period of L-shaped metal, which was more durable but less versatile since you can only use it one way without blocking ports. Then I think with MagSafe2 it has only ever been T-shaped metal.

With each MagSafe generation (or any other plugs for the matter), the individual wattage output rating of the brick itself is independent of the plug shape. In practice you can use a 85/87w brick meant for 15" MBP with a 13" or MBA as long as they share the same generation of plug, since they require less watt. And vice versa is possible as well, just with slower charging or in some cases drainage faster than charge if the machine is actively used.
You must log in or register to reply here.
Share:
Facebook Twitter Reddit Email Share Link
Register on MacRumors! This sidebar will go away, and you'll see fewer ads.
Sign Up
Top Bottom