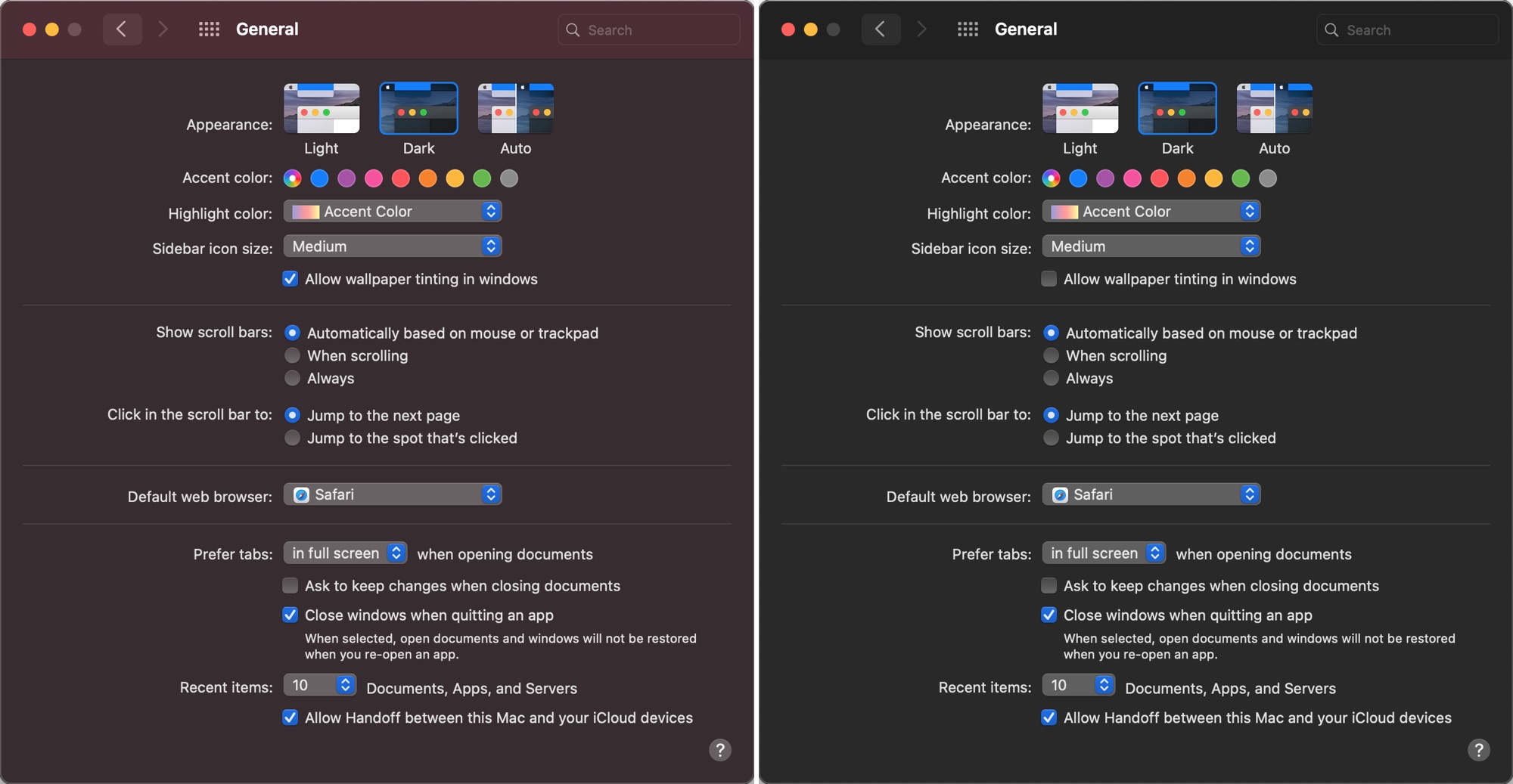 For those who have Dark Mode enabled, turning off wallpaper tinting can make windows on the Mac noticeably darker, especially when a lighter color background is in use.

Apple introduced the wallpaper tinting feature in an earlier version of macOS, and some Mac users who prefer Dark Mode have been hoping for a toggle to disable it. Prior to now, there was a method for turning it off, but it involved enabling the graphite accent color. 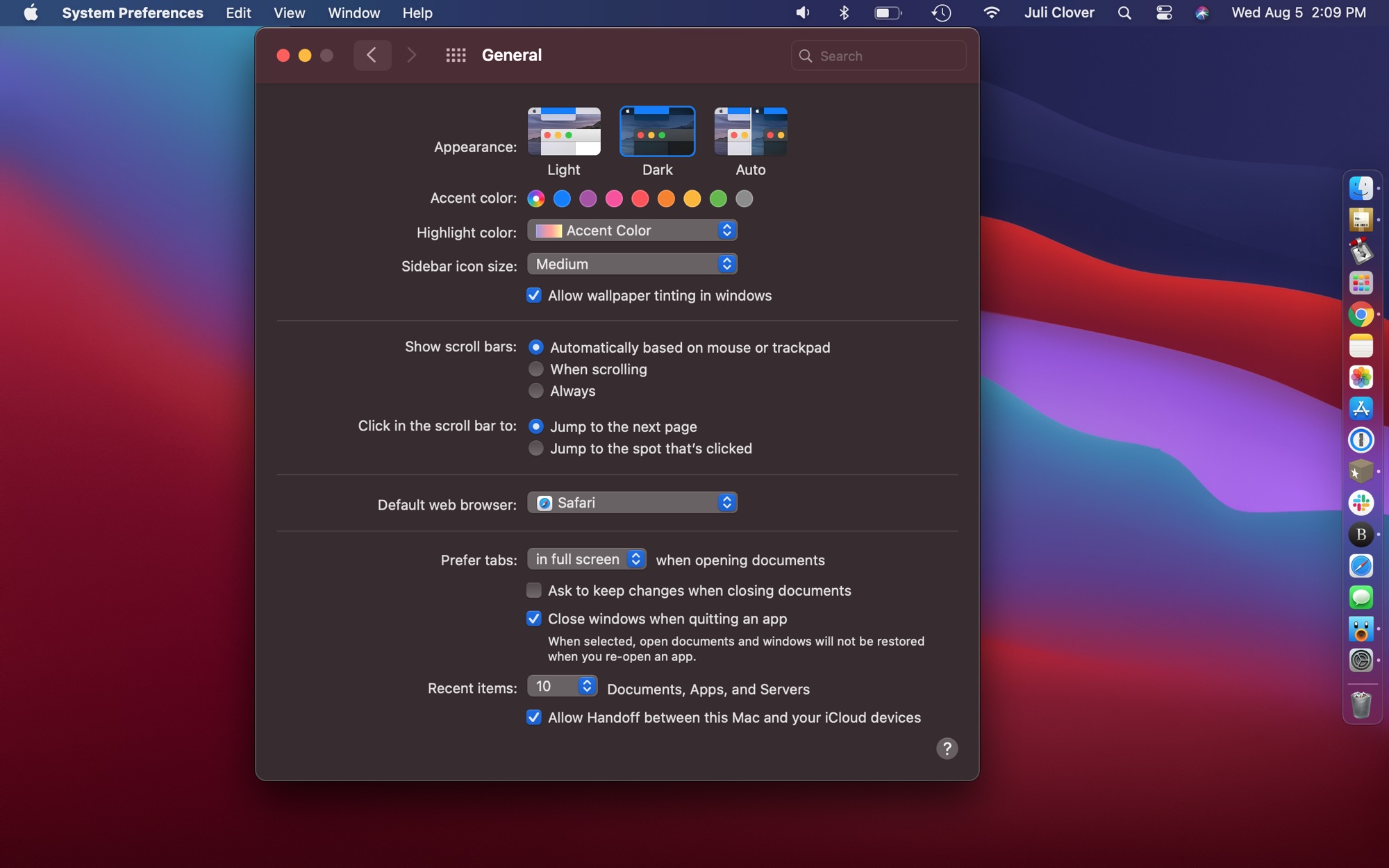 With wallpaper tint on​
As 9to5mac points out, being forced to choose graphite was not ideal because it eliminated many of the colored elements of the operating system. With macOS Big Sur, wallpaper tinting can be disabled while leaving the rest of the interface untouched. 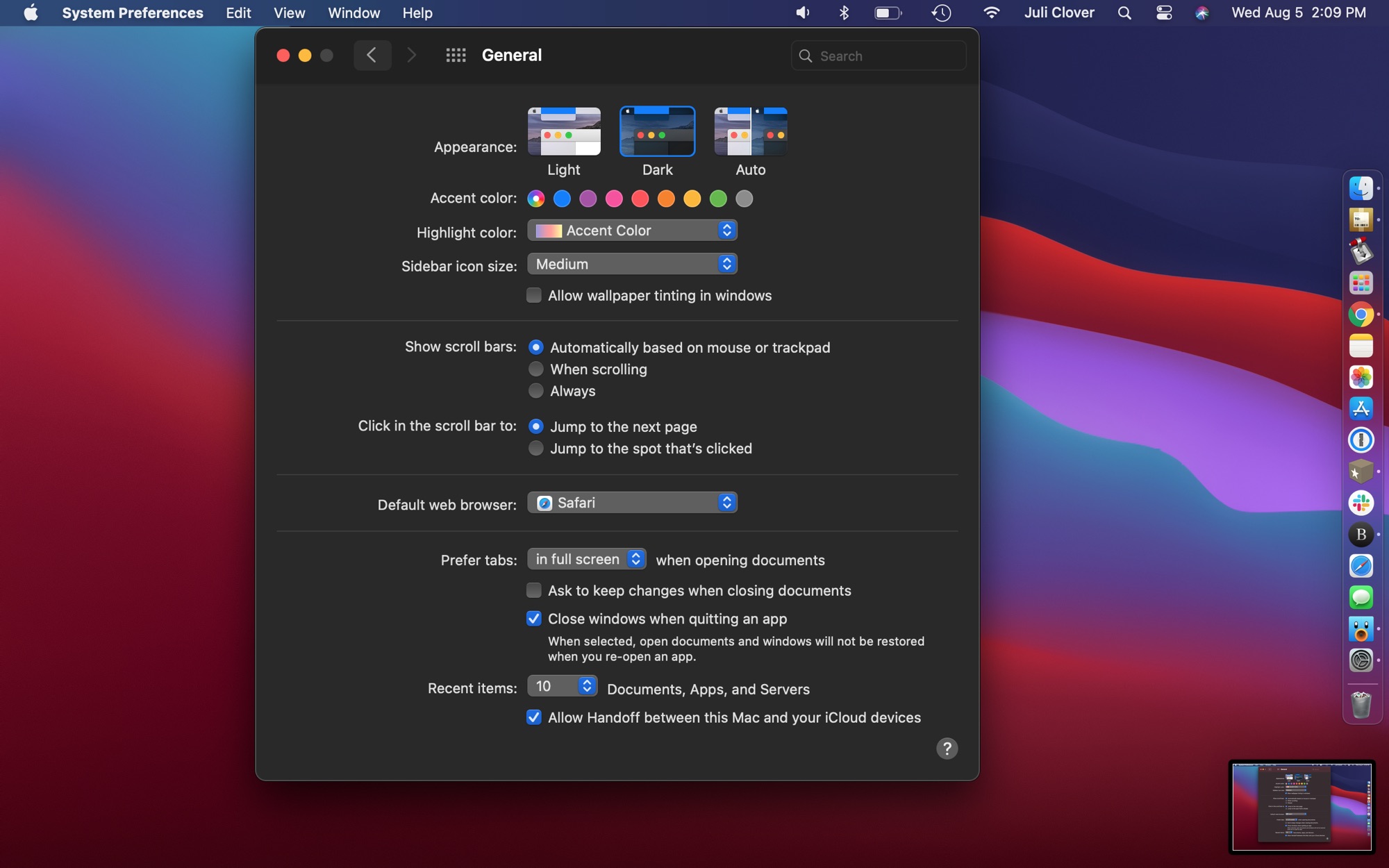 With wallpaper tint off​
Disabling wallpaper tinting will only make a difference to those who use Dark Mode, as it does not change the way that windows look in Light Mode. It's small but subtle change that some Dark Mode users will appreciate, and it only applies to windows, and not other elements of the interface like side bars.

The feature can be accessed by opening System Preferences, selecting General, and then clicking on the toggle that says "Allow wallpaper tinting in windows."

Big Sur peeps, what's the difference between this and enabling 'Reduce Transparency'?
Comment

More and more nice features I might actually upgrade to Big Sur once gm is released.
Comment

Wallpaper tinting has gotten really intense in Big Sur. I like it because it adds some whimsy, but whenever you add some whimsy you need an option to turn it off.
Reactions: michaelnugent, pioneer9k, ErikGrim and 1 other person
Comment
N

translucent windows and menus are always the first thing I disable on all of their OSes.
Reactions: Borin, markaceto, Pahanda and 7 others
Comment

Reduce Transparency affects sidebars, immersive toolbars, and the menu bar and the dock, whereas tinting affects the material color of the windows themselves. Look at the side-by-side at the top of the article.
Last edited: Aug 5, 2020
Reactions: DeepIn2U, michaelnugent, pioneer9k and 4 others
Comment

Internet Enzyme said:
Reduce transparency affects sidebars, the menu bar, dock, and other elements, whereas tinting affects the material color of the windows themselves. Look at the side-by-side at the top of the article.
Click to expand...

Tell me there’s a terminal command we can use on Mojave / Catalina to accomplish this.
Reactions: Sebosz
Comment
A

To avoid having to do this, use a dark-ish background to begin with. I find having a bright wallpaper somewhat defeats the purpose of dark mode given that my entire desktop isn't entirely covered by windows. I suppose my dark mode usage leans towards "everything dark" whereas some folks might not be as extreme and this feature will be useful.

Has dark mode taken over your work and personal lives? There are certain applications and web sites I absolutely hate to use (when I have to ) just because they don't have a dark mode. Lord, how many times I've cursed at Atlassian on a daily basis for its lack of support. And how I rejoiced when Zoom and Slack did.
Reactions: KeithBN and fbr$
Comment

I find that I can turn my MBP screen brightness much further down in Light Mode versus Dark mode. Which saves battery, and it eliminates those moments when a site with a white background suddenly sears your retinas because you had the brightness so high up to make that white text shine off a dark background. I do find Dark Mode on OLED screens helpful, because that can be a true contrasty black background for text. But on regular LED, the white light is still shining, and it’s not getting completely blocked by the “black background”. You’re just wasting energy.
Reactions: diego.caraballo
Comment

When light mode is enabled, the menu bar on the top is still in dark mode.

Is this an intentional change or a bug? I already reported it, but haven't heard back and it's still unchanged in the latest beta.

I'm one of those rare unicorns known as a "Light mode user" and hate that the menu bar doesn't respect the setting anymore in Big Sur.
Reactions: Luke MacWalker, saktomo, auduchinok and 1 other person
Comment
S

Darker? Sure.
But what about that "WOW" factor?
Comment
I

We need this for light mode too!

Let me turn off the transparancy / translucence where my active window content changes willy nilly based on what is behind it.
Reactions: kazmac, planteater, Luke MacWalker and 2 others
Comment

This option was only needed for how intense the tint became in Big Sur. Any orangey/sunset style wallpapers and your windows (even in full screen) became a shade of baby poo.
Comment

Finally. That threw me off the first few times I noticed it.
Comment
G

This should work for light mode in exactly the same way, turning off transparency.
Reactions: Mactendo
Comment

This was the most surprising and fantastic beta update to date for me. Thanks Apple.
Reactions: zooby
Comment
M

djbuddha said:
Tell me there’s a terminal command we can use on Mojave / Catalina to accomplish this.
Click to expand...

Switching to the gray accent color in System Preferences > General disables this on 10.14 and 10.15.
Reactions: djbuddha
Comment

Would love an option to turn it on for light theme. There isnt enough contrast.
Reactions: planteater and Mactendo
Comment
D

Nice, I legit thought the ugly lightened tint was a bug on the particular app’s end, and not due to MacOS. Now I need to take back that bug report..
Comment

I think you can already do this in Catalina if you select the grey highlight colour. I suppose this lets you have any highlight and still have the effect.
Comment

zorinlynx said:
When light mode is enabled, the menu bar on the top is still in dark mode.

Is this an intentional change or a bug? I already reported it, but haven't heard back and it's still unchanged in the latest beta.

I'm one of those rare unicorns known as a "Light mode user" and hate that the menu bar doesn't respect the setting anymore in Big Sur.
Click to expand...

What kind of wallpaper do you use? The menubar will change to a dark color if the wallpaper is dark.
Comment