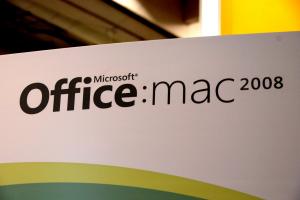 Amidst all the Apple announcements, we neglected to mention that Microsoft officially launched Mac Office 2008 yesterday. Alongside the release, they've relaunched the Mactopia website. Microsoft Office was made available for preorder last week, and is now shipping.

Surprisingly, Word gets several major enhancements in Office 2008, the first version of Microsofts productivity suite to run natively on both PowerPC- and Intel-based Macs. Those changes include a new document format, a simplified toolbar, and a new toolbox that combines palettes for managing formatting, clip art, iPhoto images, research, and bibliographies. But the biggest improvement is the addition of a new view option called Publishing Layout.
Click to expand...

And hopefully the last Office I ever buy. Perhaps they'll be a different way of looking at these issues in 4 years (or so...).

i'm pretty excited to check it out, especially since i will get it for free.
E

Steve thanked them, you should too.

They have done so much short of giving them away. If you are paying full price for this software you aren't paying attention.
K

After the mac/pc add at the keynote, one of the next announcements was office 2008 and Steve thanking MS. I thought it was a funny start. The backhanded jab that it was the FINAL app. to go native was funny as well.

personally, after having it, I really prefer the older version, if only it was intel native.
R

Kedrik said:
The backhanded jab that it was the FINAL app. to go native was funny as well.
Click to expand...

Would be funnier if it were accurate - Quicken is a major app, and it still isn't native, though a replacement is in the works.

Office v X was one of the first major apps to have made the transition from OS 9 to native OS X.

Office v 2008 was one of the last major apps to have made the transition from PPC to UB.
G

is there going to be any 30 day trial of this?
S

I don't mean to take a jab at Office 2008, it has a new UI and much more features than any other Office release for the Mac platform, but I was expecting more from a Intel native release. Anyone else feel the same?

I don't mean to take a jab at Office 2008, it has a new UI and much more features than any other Office release for the Mac platform, but I was expecting more from a Intel native release. Anyone else feel the same?
Click to expand...

Note: the loading time of an app is not the most important speed issue of an app.
An app like PowerPoint MUST now operate at excellent speed using large media files on an Intel Mac, and the load time of it is not too important.

i installed it already, and it seems much stronger than 2004, but start up of Word seems a bit sluggish... not very snappy... takes 8 bounces after start up, then about another 10 seconds of a static splash screen... it might be something with my computer, because it's really not acceptable for Word to take longer to start up that Photoshop or Illustrator.

MacRumors said:
Amidst all the Apple announcements, we neglected to mention that Microsoft officially launched Mac Office 2008 yesterday.
Click to expand...

Gods I hope this is the last time I have to buy Office for our organization. Maybe in a few more years the M$ hegemony in this area will finally be broken. M$ is truly the Ma Bell of desktop computing.

I bought it yesterday and installed it.

I haven't had much time to use it, but initial impressions are:

1. It's faster, but not crazy fast
2. New interface is weird. Sometimes better, sometimes a train wreck.
3. No scripts is a disastrous decision. This was my last "lock-in" to the MSOffice world, and now that it is gone, it will speed my move to iWork.

I hope this is the last version of Office I need to buy. Yes, MSOffice was 140 bucks which isn't too bad, but there really isn't much there that is new that excites me that I can't do in iWork. And there is a ton in iWork which I can do which is exponentially better.

The obvious exception to this is Excel which can do some key things Numbers cannot. (Pivot tables, speed, less bugs and quirks, etc.) While I will use Excel until I see what is new in the next version of Numbers, I actually prefer Numbers since it is more intuitive and I love the templates.

With all of that said, MSOffice is key for the Apple ecosystem, so I welcome it.
K

I don't mean to take a jab at Office 2008, it has a new UI and much more features than any other Office release for the Mac platform, but I was expecting more from a Intel native release. Anyone else feel the same?
Click to expand...

I see absolutely no reason to get it. I have 2004. It looks like it could eat up 1/2 of my 12" PB screen with menus alone. And the thing is, I still have a G4 and bare feats pretty much showed that the old version is faster than the new version.
7

After using this for a day, I will still use Pages as my primary word processor, and Numbers as my primary spreadsheet app (I don't make presentations), but Word and Excel are good to have for compatibility reasons, and they're not too shabby. At last NeoOffice has competition in the heavyweight suite arena.

I am very glad that MS's development team got the right idea with Word and the rest of the Office suite. SIMPLICITY, which was a major flaw in the previous program. They made it look a lot like Pages which was a much better app to use if you didn't do too much professional/business/niche feature work.

I may still be using iWork and Pages months from now because of the high price of Office, the plethora of niche features that I won't be using, and iWorks ability to handle graphics and media which still makes Keynote the king of presentations.

My girlfriend is a teacher, so I am sure that she will be using it like crazy.

My Day on the iPhone

I should have Office 2008 sometime this week and am excited about using it. Especially the new Entourage, looks like it spanks mail and iCal all over the place.

My question is will there be a My Day app for the iPhone come February? It seems like an obvious path for this mini-app. And if there isn't, how hard would it be for a developer to make this?
T

Its a very good deal. Just £89 on the Amazon UK site for the full version which isn't limited to just students now. I'm tempted.

That there big London

I hope these new file formats don't take off. If they do, then I'll have to upgrade.

I'm perfectly happy with Office 2004. Runs fast enough for me on my MBP under Rosetta. I only really use Word and Excel, but I use them quite intensively. I use Entourage just as an archive for my pre-Mac emails, and PowerPoint only when I absolutely have to.

I've got better things to spend my money on - even if it is cheaper this time round.

I too would like to demo this before I buy, if anyone has a link please post it.

Amidst all the Apple announcements, we neglected to mention that Microsoft officially launched Mac Office 2008 yesterday.
Click to expand...

did macrumors REALLY neglect to tell us about MS' release?
B

So is it worth the upgrade from Office 2004 for a student?

MacRumors said:
... Microsoft Office was made available for preorder last week, and is now shipping ...
Click to expand...

Seriously underwhelming product from my point of view.

We've already decided where I work that every demo we're asked to give for Office is going to include at least 15 minutes talking about iWork.

Our IT department has talking this over a lot and the majority consensus is that since the users are going to need to learn and entirely new interface and use entirely new file formats, there just isn't any percentage in sticking with Office exclusively. We won't stop people from using it, but we are going to be steering anyone we can away from it.

We have a lot of secretarial staff in their mid forties and they don't like change. If we are going to go through the pain of endless tutorials and help sessions, we might as well go with the better, easier to use product.