Dating back to the launch of the original iPad in early 2010, Microsoft has been considering the possibility of releasing a version of its Office productivity suite for the tablet platform. But despite repeated claims of an imminent launch, the only iOS release so far has been an Office Mobile app for iPhone available for subscribers to the company's Office 365 service. 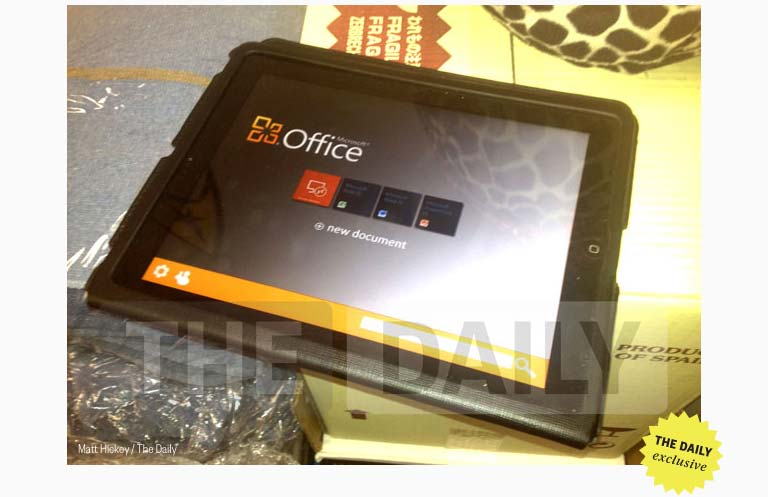 The most recent word on Office for iPad came back in April, when a leaked roadmap indicated that the next major version of Office was due to ship in spring 2014, with an iPad version arriving in the fall of that year.

Microsoft does indeed appear to be waiting to launch the next major version of its main Office suite before launching an iPad version, as The Verge reports that outgoing Microsoft CEO Steve Ballmer today revealed that Office will come to the iPad once a "touch first" interface is ready. That interface will reportedly be arriving on the next version of Office for Windows.

Microsoft's head of applications and services, Qi Lu, also commented on touch versions of Office at an analyst meeting recently. Lu said the company is "working on touch-first versions for our core apps in the Office suite," and that Microsoft will "bring these apps to Windows devices, and also to other devices in ways that meet out customers' needs."
Click to expand...

The timing for an Office for iPad release remains unclear based on these most recent developments, but they appear to be consistent with the previously leaked roadmap, which would put the Office for iPad launch into late next year.

... only 4 years after the release of the first iPad.

Meanwhile, how many third-party Office-compatible apps have sprung up to fill that void?
D

Only way they will release this is if they decide to completely scrap surface. So yes, about late next year seems correct

MacRumors said:
Ballmer said "iPad will be picked up when there's a touch first user interface." That touch first interface appears to be making its way to the Windows version of Office first, with the iPad edition to follow afterwards.
Click to expand...

Maybe i'm in the minority when i think "Touch First" for some applications renders them next to useless.

notjustjay said:
... only 4 years after the release of the first iPad.

Meanwhile, how many third-party Office-compatible apps have sprung up to fill that void?
Click to expand...

Plenty of great apps have come along and taken care of most users. I use QuickOffice Pro and I thats all I'll ever need. Im sure there are people that will get this and its cool thats its coming out. But, geesh, a TAD late to the party?
D

So "Touch First" is coming to the desktop first? Seems backwards.
K

Wow! Taking that long? How much?

Microsoft needs to break into separate companies. There is no way the Office division should have to wait for the hardware division before becoming established on the iOS platform. What a huge wasted opportunity.
A

So it's going to be at least this time next year before we see Microsoft Office for iPad? That's asinine! For as long as it's taking them to get their ducks in a row, it had better be a first class user experience right out of the gate.

danielowenuk said:
Only way they will release this is if they decide to completely scrap surface. So yes, about late next year seems correct
Click to expand...

This will never see the light of day on an iPad until MS realizes the opportunity to make a lot more money is greater on the iPad. It depends on how pragmatic MS is but I don't see this happening for at least TWO years if ever.
J

Then why isn't Office on the Surface RT waiting?

in a ziplock bag inside a car's trunk

they are basically admitting defeat in all that relates to the surface
Last edited: Oct 8, 2013

Subscription basis?: no thanks I'll use iWorks, good enough for tablet work.

Microsoft has to know that if they release Office for iPad, the Surface will "officially" be dead to the world.

s2mikey said:
But, geesh, a TAD late to the party?
Click to expand...

You, sir, are being generous!

notjustjay said:
... only 4 years after the release of the first iPad.

Meanwhile, how many third-party Office-compatible apps have sprung up to fill that void?
Click to expand...

QuickOffice is now free for anyone with a Google account. This is huge.

So... Ballmer himself admits what I have said since announced MS Office for Surface: that the interface is not optimized for touch and that "touch mode" (i.e.: bigger icons with more spacing) is not sufficient on a tablet.

I had high hopes for MS Office for iPad about 18 months ago. I thought MS would one-up Apple's iWork touch interface and then add true compatibility with MS Office documents. When I saw Surface RT, I lost hope.

Now it sounds like Apple's great developer tools have helped the iPad Office team to cross the finish line first with the Windows 8 touch version taking cues from the already-implemented iPad version, but lagging behind it.

Amazing to me. Microsoft had a lock on PC OS and Office Productivity software. Their lock on PC OS is dwindling partly because of OS X, but mostly because of mobile (especially iPad). Meanwhile, Microsoft is sacrificing their stranglehold on Office Productivity software in an effort to bolster Windows 8. Now it looks like their dominant positions in both are going down the tubes as users turn to other solutions for an office suite on iPad and Apple and Google have both provided free web-based offering for desktop.

Had Microsoft released a touch-first iPad version of Office two years ago it would have lit a fire under the Windows Office team to catch up, but at least Microsoft would have a dominant position in office productivity software on tablets (especially iPad) and they would be making tons of revenue off it (far more than they have made off Windows 8 and Windows Phone licenses).

Who cares? I mean seriously.
S

Microsoft made a huge mistake. a $49.99 pure profit price on a full Office suite for iPad would have easily made more money then the Surface disaster has, or ever will make. You are a software company Microsoft, stick to it. Now they are in a situation where many people have found alternatives that work for them. People will either not even think about buying it, or only pay a much lower price.

haruhiko said:
QuickOffice is now free for anyone with a Google account. This is huge.
Click to expand...

And of course, iWork is free for anybody who buys a new iOS device.

I have iWork + Docs2Go. With both I have not had need of anything else. I use Apache OpenOffice on my Mac along with iWork.

Two years ago, I would have forked over $150 for Mac licenses of MS Office and $100 for an iPad MS Office suite (assuming full document compatibility between them). Today (and especially by the time MS Office releases for iPad), I doubt I will even consider wasting my money.

iWork's touch interface is amazing. I only wish document compatibility with the MS Office and the desktop version of iWork were better. Most of my problems are missing fonts, but there are some things you can do in the desktop versions of iWork that break or confuse the iOS versions. It's an issue when saving a document to iCloud and moving between platforms.
M

TsunamiTheClown said:
Maybe i'm in the minority when i think "Touch First" for some applications renders them next to useless.
Click to expand...

I can't help but think this is why Steve Jobs was so brutally against mice with more than one button. By forcing every version of Mac OS to be usable with ONLY a one-button mouse, it kept the interface from becoming Dependant on multi-button mice.

Microsoft is out there pushing seven button mice and then telling engineers to build that into their core software... Cue the department in-fighting and Microsoft will NEVER make a pure "one button mouse" version of anything... They don't have the internal discipline.

The failure of Surface is the failure of Microsoft Engineers to clean their code and function with minimal inputs. They are not capable of doing what they are told at a team/organization level. So they keep releasing the same half baked "pen based" products people have rejected for ten years.

Microsoft literally has "all the money in the world" to throw at reengineering MS Office and yet they repeatedly have not accomplished it.. It's their CORE PRODUCT, and they don't have the willpower to master it.

Do they mean the next version of Office for Mac

Because Office for Windows is currently 2013, and Mac is 2011, and they are usually one year apart.

For the consumer Microsoft Office is not relevant anymore, Google docs and Apple's suite of App's cover everything.

For me Microsoft still don't 'get it', their tablet OS is full of bloat, so will MS Office. Pages, Numbers, Keynote all combined take up less than 900mb on my iPad. No way will MS Office get under 2GB, it will be more expensive and not offer any more features than the competition. Couple that with the competitors offering becoming free then MS have a product that 4 years ago people were crying out for, now no longer see any value compared to the alternatives.
J

haruhiko said:
QuickOffice is now free for anyone with a Google account. This is huge.
Click to expand...