Microsoft has opened up its Office Insider program to users on Macs, following the launch of the service on Windows Desktop, Windows Mobile, and Android devices last November (via ZDNet). The program lets users who are signed up as Office 365 subscribers gain early access to new features and innovations within the suite of Microsoft Office applications. 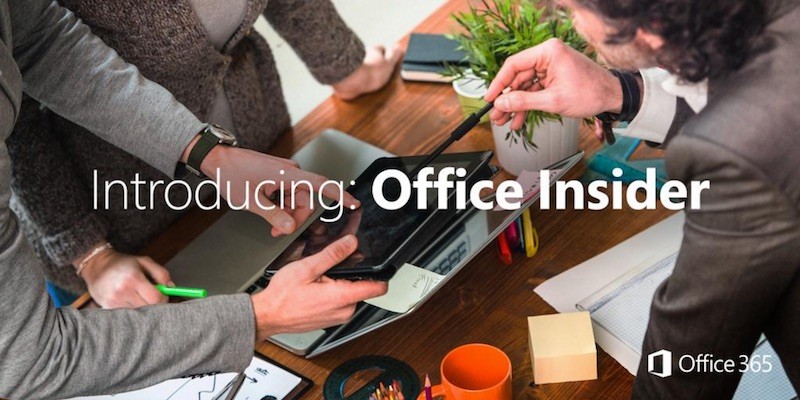 To sign up for the program on a Mac, all users need to do is opt-in to the Office Insider build within the latest Microsoft Auto Update pop-up box. Those who do choose to be a part of the testing will be about one to three weeks ahead of the final release for each new beta-testing feature, according to a few Microsoft officials. The company encourages those interested to check out the company's Office Insider information page to learn more about the early-access program.

Separately, Microsoft yesterday brought a suite of new features to the iPad and iPhone, introducing new drawing tools for the iOS devices that center on the use of 3D Touch for the iPhone 6s and the Apple Pencil on the iPad Pro. 3D Touch on the iPhone allows for access to Quick Actions from the home screen, while a draw tab can be found in each Office application on iPads to add personal notes and sketches to any document.

It's nice to see Microsoft putting more of an emphasis on Mac users, however, since I discovered Evernote and the iWork suite, I almost never use Microsoft products anymore.
Reactions: Keane16, srminton and Gigaman
Comment

Not excited. Microsoft is long due for an updated release of Skype for Business (formerly Lync for Mac).
Their latest version is full of bugs showing poor programming skills.
Reactions: srminton
Comment

Funny, since Apple has been putting less and less emphasis on Mac users, I've been using Office and Windows 10 more and more.

No, not this time.
They still have not fix the problems Excel 2016 for Mac has with big tables.
Excel on W10 running through Parallels is handling them much better.
Also tons of bugs in Power Point 2016 and in Word 2016 reviewing features.
Better to fix problems that power user have rather than focussing on features for people using 90€/year Office as MS Notepad.
Comment

I just signed up for 365 last week, finally. I put it on 2 PC's and the MacBook Pro as well as iPhone/iPad. While I am a member of the Windows Insider Program, I'm not really interested in the Office Insider Program. That's because I am a rather basic user of Office as it is, and could probably still use Office '97 and get my tasks accomplished.
Comment

I was in the Windows Insider Program and have gotten to reinstall my system twice when they release "beta" versions that don't play nice with my (pretty basic) assortment of software and games.

I really don't want MS to screw up my MacBook with Insider/Beta versions of Office since I actually use it for day to day business.

Amazing Iceman said:
Not excited. Microsoft is long due for an updated release of Skype for Business (formerly Lync for Mac).
Their latest version is full of bugs showing poor programming skills.
Click to expand...

Like updating people's online status only when you scroll down and their name is visible on the screen?

Also, there is no Skype for business for Mac yet, is there?
Comment

lk400 said:
Like updating people's online status only when you scroll down and their name is visible on the screen?

Also, there is no Skype for business for Mac yet, is there?
Click to expand...

Parasprite said:
Funny, since Apple has been putting less and less emphasis on Mac users, I've been using Office and Windows 10 more and more.

I have to agree with you on this, to a certain extent. I have certainly seen a huge erosion of apples commitment and focus on the pro products and osx, rather to make some FB/icloud Frankenstein cretinous mutant that ios seems to want to evolve into [Sorry Ive]. This is fine for my iphone and ipad, although i loathed the closed format in the early days, however, my tempestuous trials with android and reliance on JB proved less than fruitful and feasible; essentially, I had less time and needed more reliability from them.
I have not used windows at home since OSx Tiger, and very recently, tried windows 10. I got a virus and malware within 5 seconds of connecting to intent and installing chrome. After a while, i actually found win 10 quite a pleasure to use, and installed some legacy games. Just wish i could run win 10 off an external TB2 ssd from my imac.
[doublepost=1453671937][/doublepost]

[1] Re: Evernote
I've been an evernote premium user for some time, whilst at first it wowed me, and love how i can search for things, native ocr recognition etc, it has its faults. It works well on mobile devices, however really simple things and piss poor support leaves me wanting to look elsewhere. For example. zooming notes in osx is not easy, people have asked this for over 2 years now. The ability to create stacks is nice, but a dropbox styles file archive with the ability to creat multiple folders within folders would be better too. I understand the ideological difference here, that tags and advanced search protocols will allow Evernote to cultivate and learn to the users needs, but for serious large number of documents, and literally thousands of files, this is actually nowhere near as fast as dropbox. Ideally Evernote with dropbox styled folder archive would be perfect.

[2] Re: iWork
What i like about pages, numbers, is simplicity, and now icloud integration. Howver for serious work, and boy have i tried, both ms word and excel runs circles around their apple counterparts, as much as this pains me to say this. Try writing complex 2/300 pages thesis on pages, with graphs, tables, watermark, headers and footers; pages is not bad to take notes and write quick letters or draft emails. As for numbers, the gap with excel is massive, and certainly even the more basic tenets and functionality of excel are missing, for my needs that is. As for powerpoint vs keynote, for my needs, i prefer keynotes, and actually recently started using prezzie. Google docs all have similar flaws.
Last edited: Jan 24, 2016
Comment

I could not be happier with Microsoft Office on Mac (OK....let me draw with my wacom in oneNote and I will be thrilled.)

They make the best office suite when compared to google docs, and iWork (which seems ignored.) Keynote is still the best but using crayons and paper would beat powerpoint.

They have integrated it well with the cloud. A little work left on one drive and it will be perfect. We gladly pay for the service.