Microsoft announced an overhaul of its Groove music app for iOS yesterday, featuring a redesigned interface and a handful of new features for the subscription-based service, home to over 40 million tracks.

The 3.5.6 update promises a much faster sign-in for mobile users of the $9.99-per-month service and introduces a new Explore view to the UI where users can discover popular songs and new releases from top artists. 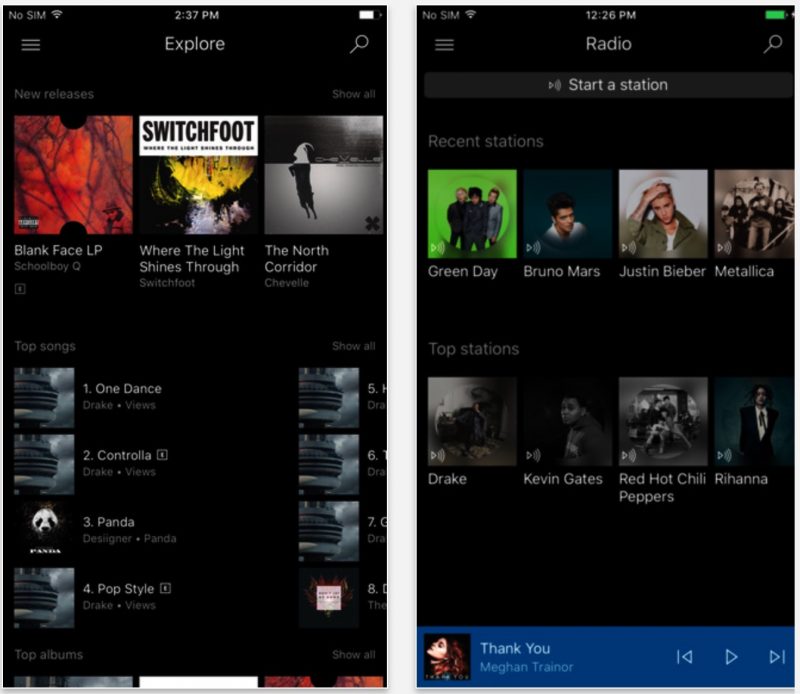 The update also offers significant improvements to playback reliability, as well as faster download of songs and albums for offline playing. Lossless OneDrive support and new sorting options when viewing music collections have also been implemented.

In addition, the update includes fixes to the sync process that requires users' music collections to be rebuilt from scratch, which Microsoft promises is a one-time procedure, as well as optimizations to screen resolution to support larger mobile displays.

The app still needs to be in the foreground to download music, although Microsoft says a background download feature is coming in a future update.

Microsoft Groove is a free download for iPhone and iPad available from the App Store. [Direct Link]

Who knew they even had a music streaming service. DOA
Reactions: jeffirl, R3k, GrumpyMom and 8 others

Did not know this existed.
Reactions: GrumpyMom, jjm3, rmatthewware and 2 others

Microsoft has a music app?
Reactions: GrumpyMom, jjm3 and Avieshek

They have not had a bad track record recently . They are only promising a background download feature . Just like apple and Google does with incremental feature updates

Definitely didn't know they had a music app.
Reactions: GrumpyMom, jjm3 and Avieshek

Okay, before I bag it, I'm going to download it and give it a go.

Ha! While I almost never use Groove, I updated the app on my iPhone and launched it. Guess what? Freezes on opening screen then crash and burn. Nice work, Microsoft. Seems the Zune software days were your best.
Reactions: Red Oak

The desktop Windows version is pants, but this iOS update is actually quite a decent overhaul. Love the lossless support.
A

Groove is on all Windows 10 installs. That's when I reached out for VLC. Not sure why MS is competing in this loosing battle.

Cool, I can finally listen to WMAs on my iPhone.
Reactions: Zirel and tonyr6
E

I always thought they announced many months ago to discontinue it. So I never tried it.
Reactions: jjm3

I found out about this app via Windows 10 and it seems good. Competition is good and I hope Microsoft continues to improve it and maybe one day it'll be as well known as Spotify and Apple Music.

machpost said:
Cool, I can finally listen to WMAs on my iPhone.
Click to expand...

Daws001 said:
Microsoft has a music app?
Click to expand...

they also apparently make a phone OS too
M

WMA was always a horrible unreliable format which is why many streaming services ditched them for MP3 and AAC.
B

Good stuff. This app on W10 is fantastic and it allows me to stream my entire (owned) music library. Plus, it handles "now playing" like I expect it to. I'm not used to the "up next" concept that Apple Music and Spotify follow.

I've gotten Xbox music/groove music yearly passes for as low as $30/year. I'll be on the lookout.
R

I don't have a subscription, but I use the app to listen to my own music library as an alternative to iTunes Match (which I cancelled when they dropped the formerly included radio service). You can upload your music files to Onedrive and then use this app to listen to them on the go.

5 people are happy with this, and looks like a 6th person is joining!
F

Good stuff. If you've, like I, taken advantage of the OneDrive 1TB cloud storage part of their Office365 package, then this app will stream (and download offline should you wish) the music you've stored on OneDrive. Works very well.
L

So many Apple fanboys in this thread. So tragic. That being said this is macrumors so it is to be expected.

It's a good app and I am glad I can finally switch back from Apple Music. Much better than and I don't feel like I'm settling.


dmylrea said:
Ha! While I almost never use Groove, I updated the app on my iPhone and launched it. Guess what? Freezes on opening screen then crash and burn. Nice work, Microsoft. Seems the Zune software days were your best.
Click to expand...


anthorumor said:
Groove is on all Windows 10 installs. That's when I reached out for VLC. Not sure why MS is competing in this loosing battle.
Click to expand...

because god forbid anyone want to actually provide competition. It's like asking why Apple continues making macs despite the poor market share. Groove is an app that works on all three operating system for mobile and for those on desktop as well as Xbox players and allows you some great features so it isn't a bad app.


m2nal said:
they also apparently make a phone OS too
Click to expand...

and it isn't that bad. It's pretty good and definitely my primary device. With my 6s+ being secondary. The gym and night out phone.
O

Still no Chromecast support is a bit of a problem.