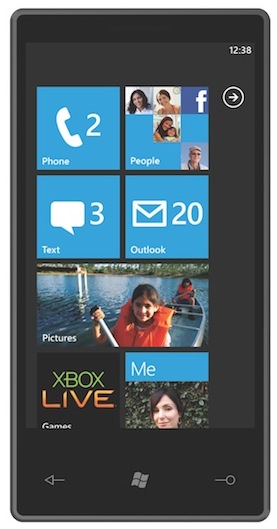 Windows Phone 7 Start screen
As predicted, Microsoft today unveiled Windows Phone 7, the next-generation smartphone operating system serving as the successor to and rebranding of the company's Windows Mobile software. One of the software's key features is the use of integrated "hubs", offering content views based on content rather than specific applications. Hubs will include People, Pictures, Games, Music+Video, Marketplace, and Office. 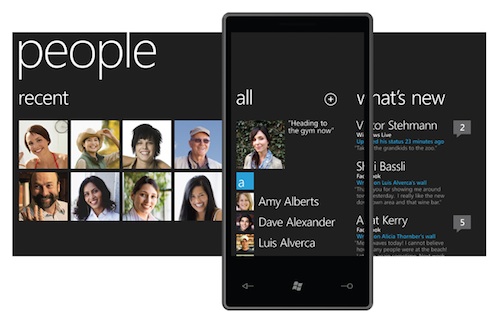 With Windows Phone 7 Series, Microsoft takes a fundamentally different approach to phone software. Smart design begins with a new, holistic design system that informs every aspect of the phone, from its visually appealing layout and motion to its function and hardware integration. On the Start screen, dynamically updated live tiles show users real-time content directly, breaking the mold of static icons that serve as an intermediate step on the way to an application. Create a tile of a friend, and the user gains a readable, up-to-date view of a friends latest pictures and posts, just by glancing at Start.
Click to expand...

A number of handset manufacturers and carriers have committed to the Windows Phone 7 Series platform, and the first handsets based on the operating system are scheduled to become available in "holiday 2010". 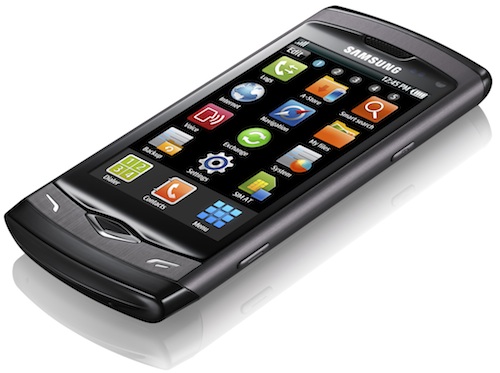 Samsung Wave
Samsung yesterday also Samsung Wave, the first handset to be based on the company's own bada platform. The Wave offers an 800x480 active-matrix OLED screen, 5-megapixel camera, Samsung's revised TouchWiz 3.0 user interface, and 2 GB of internal storage with a microSD slot allowing for up to an additional 32 GB.

The Samsung Wave offers a Super AMOLED 3.3 display that makes the screen truly come alive, a Social Hub to bring you closer to your contacts and connections, and TouchWiz 3.0 for an intuitive and hugely customizable user interface. The Waves high-speed CPU ensures swift, smooth application experiences and multi-tasking, making the device an always-on mobile multimedia companion. The Samsung Wave has been built to offer users an unrivalled level of performance, customization and choice in how they connect with their world. The stunning full touch mobile will be available globally from April 2010.
Click to expand...

Competition is good. Let's what you can do for OS 4.0 Steve.
S

Although I wish people would stop using the "competition is good" line. A bit simplistic, but fair enough, it just seems to be used a thousand times every day on this forum. zzzzzz

My God is that OS ever fugly!

At least Micro$ucks is consistent.

That looks impressive, maybe even makes the iPhone OS look a tad dated. I'm sure Apple will leap ahead again soon enough though.
I

Although I wish people would stop using the "competition is good" line. A bit simplistic, but fair enough, it just seems to be used a thousand times every day on this forum. zzzzzz
Click to expand...

I agree it looks great. Let's see how it work with multiple phone makers and multiple hardware. Optimistic but realistic!

talkingfuture said:
That looks impressive, maybe even makes the iPhone OS look a tad dated. I'm sure Apple will leap ahead again soon enough though.
Click to expand...

Tell me you're joking.

The first picture just makes my eyes bleed. That first image is so cluttered and ugly it should be killed with fire. The bottom image is, a rip off of the iPhone, but at least it looks right.

Overall, it may be an OK phone, now what run on it besides the standard software? Is there an app for that?

Here's to hoping for a more streamlined iPhone OS 4 (with multitasking!).
I

It does look like rubbish. Nice try, back to the drawing board.
S

To copy the iPhone doesn't take much creativity. To come up with something new is hard to do. From these products it looks like there just about a year behind Apple

AT&T wants in on Microsoft's new OS it seems. 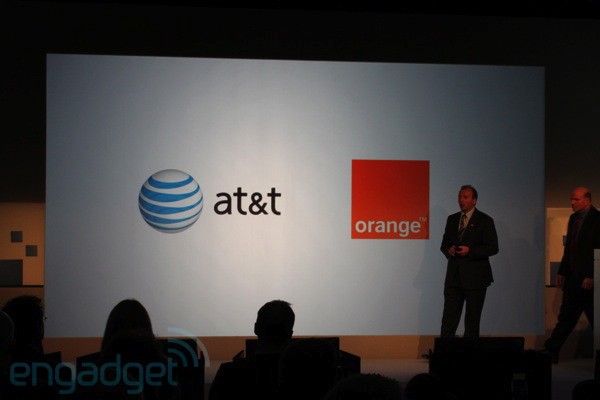 What competition? That's what Apple started 3 years ago. If that Samsug is real it's a total iPhone OS rip-off.
J

I just saw the interface video and read the article at gizmodo.com - I have to say that this phone looks awesome. I've owned two WinMo phones back in the day, and they were terrible. Beyond terrible. And then I bought the first iPhone, the iPhone 3G, and now I own the 3GS. The iPhone blows those phones out of the water, and is still by far more polished than the latest Android phones I've played with.

But this is different. WinMo 7 looks polished and makes the iPhone UI look dated (though it was looking dated even before I saw the first screen of 7). I wouldn't have ever considered buying a WinMo phone after having used an iPhone, but I must say, I'm very impressed.

If Apple doesn't up there game with 4.0, they have a serious problem on their hands. Especially with the iPad. I'm not knocking the fact that it runs iPhoneOS, but it looks like it came out in 2007, with those tiny app icons on a huge background. If MS can reinvent themselves and makes phones that truly compete with the iPhone in every aspect, and blow it away in others, then what can they do with tablet computing? Like I said, whoa...
I

Povilas said:
What competition? That's what Apple started 3 years ago. If that Samsug is real it's a total iPhone OS rip-off.
Click to expand...

I agree completely. If it is priced at half the price of the iphone (can only buy it over here, no sub) then it is competition. Samsung have always made cheaper stuff. Quality is not all there.

Here's to hoping for a more streamlined iPhone OS 4 (with multitasking!).
Click to expand...

It looks streamlined to you? OS which is not even out yet on a prototype device... Good lord...
L

Wow, people talk about "cluttered screens" here? Have you looked at iPhone OS? 20 icons, super multicolored, staring you in the face. How is that less cluttered than this?

And how is this ugly? This is pretty simple as far as phone UI goes, I would say as simple as it gets, and still, people see "Microsoft" and go to criticize it. I've said it before, and I'll say it again, Apple is not your friend. They're not your buddy, they don't feel better or worse if you mindlessly follow them to the ends of the earth and call everything else trash. Is the iPhone the best smartphone out there? I think so. Does Windows Phone 7 Series stand a chance? Definitely. This looks new, exciting and very visionary. Let's keep from being rabid about it just because it bares the Microsoft name.

Also, lol at the people who keep saying Microsoft stole from Apple. Read up. Apple took them to court. Check out who won that argument.

Cubert said:
My God is that OS ever fugly!

The phones and UI are horrid.
G

That is if you even believe in Microsoft's ability to ship it on time.

Although I wish people would stop using the "competition is good" line. A bit simplistic, but fair enough, it just seems to be used a thousand times every day on this forum. zzzzzz
Click to expand...

Yeah, you are probably right. Competition is not good. Let's just have one company run everything whether it be Apple or M$ or whatever. No drive for innovation whatsoever.
S

So the waiting game is on...

And now let's see, what HTC will do with it. iPhone OS 4 better rocks the party, otherwise it will be a WinMo 7 device for me.
B

Windows Phone 7 looks like a winner, I watched some of the demos. It is a new unique interface that does in fact makes the iPhone and Android look dated. Microsoft is really coming out swinging here.
You must log in or register to reply here.
Share:
Facebook Twitter Reddit Email Share Link
Register on MacRumors! This sidebar will go away, and you'll see fewer ads.
Sign Up
Top Bottom