Microsoft is today updating its smart camera app for iOS devices, Microsoft Pix, with new features that overlay artistic filters on top of user photos. The company said that the Pix team used neural networks to browse massive datasets of classic paintings in order to "learn the essence of what makes a given style of painting recognizable," all in an effort to fuel Pix's new features.

The first feature is called "Pix Styles" and it transforms pictures into styles inspired by popular works of art, or has the ability to add certain effects to a photo like making it look like it's on fire. Microsoft said that Pix Styles differs from traditional "filters" because it adds and alters texture, pattern, and tones to the picture to turn it into something completely different, instead of simply altering the image's colors. 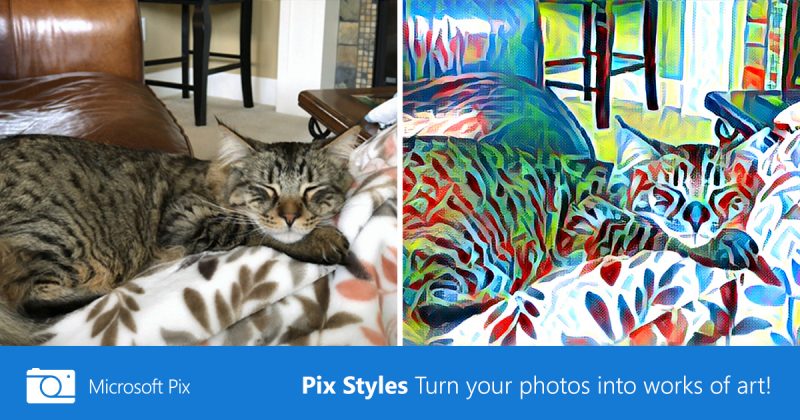 Pix Styles will still optimize the faces of the subjects in a photo to keep people recognizable, which was one of the flagship features of the app when it launched last July. Microsoft called the app "people-centric" when it debuted, since Pix could focus in on faces in a picture to adjust the focus, color, and exposure to ensure each subject looked their best.

One of the Pix team members, Josh Weisberg, said that Microsoft Pix is still a high-quality app with a focus on automatically providing users with the best shots possible, but the new features were added to generate fun moments for users that can be shared on social media.

"These are meant to be fun features," said Josh Weisberg, a principal program manager in the Computational Photography Group within Microsoft's research organization in Redmond, Washington. "In the past, a lot of our efforts were focused on using AI and deep learning to capture better moments and better image quality. This is more about fun. I want to do something cool and artistic with my photos."
Click to expand...

Microsoft calls the second feature "Pix Paintings" and it creates a time-lapse animation of the picture being painted in whichever artistic style the user chooses. The Pix team said that the app's artificial intelligence and deep neural networks fuel both the photo transformation in Pix Styles and animated redrawing in Pix Paintings.

Pix Styles specifically will work directly on the iPhone with no cloud requirements needed to run the feature. Microsoft said that this is "part of a broader shift" to push AI away from the cloud and to user devices at the "edge of the network." The user benefits with the update since it lets them play around with Pix Styles "without using your data plan," saving money and lowering load times in the process.

Microsoft Pix is available to download on the iOS App Store for free [Direct Link].

These painting filters still have this clearly artificial look to them, but it's still a neat effect.
Comment
S

Seems like a neat application, but why would I would want to hand access to my private photos to a company with a history of filching its customers like Microsoft?

Sasparilla said:
Seems like a neat application, but why would I would want to hand access to my private photos to a company with a history of filching its customers like Microsoft?

I think it's more than obvious that the real purpose of this app is using the users' photos for data mining and feeding into their "deep neural networks" for their own benefit. It makes sense that they disguise it with "fun" features to lure the easiest prey.
Comment