Microsoft's "Project xCloud" streaming game service that pairs with its Xbox Game Pass won't be available on iPhone and iPad when it launches this September, and Apple's App Store restrictions are to blame. 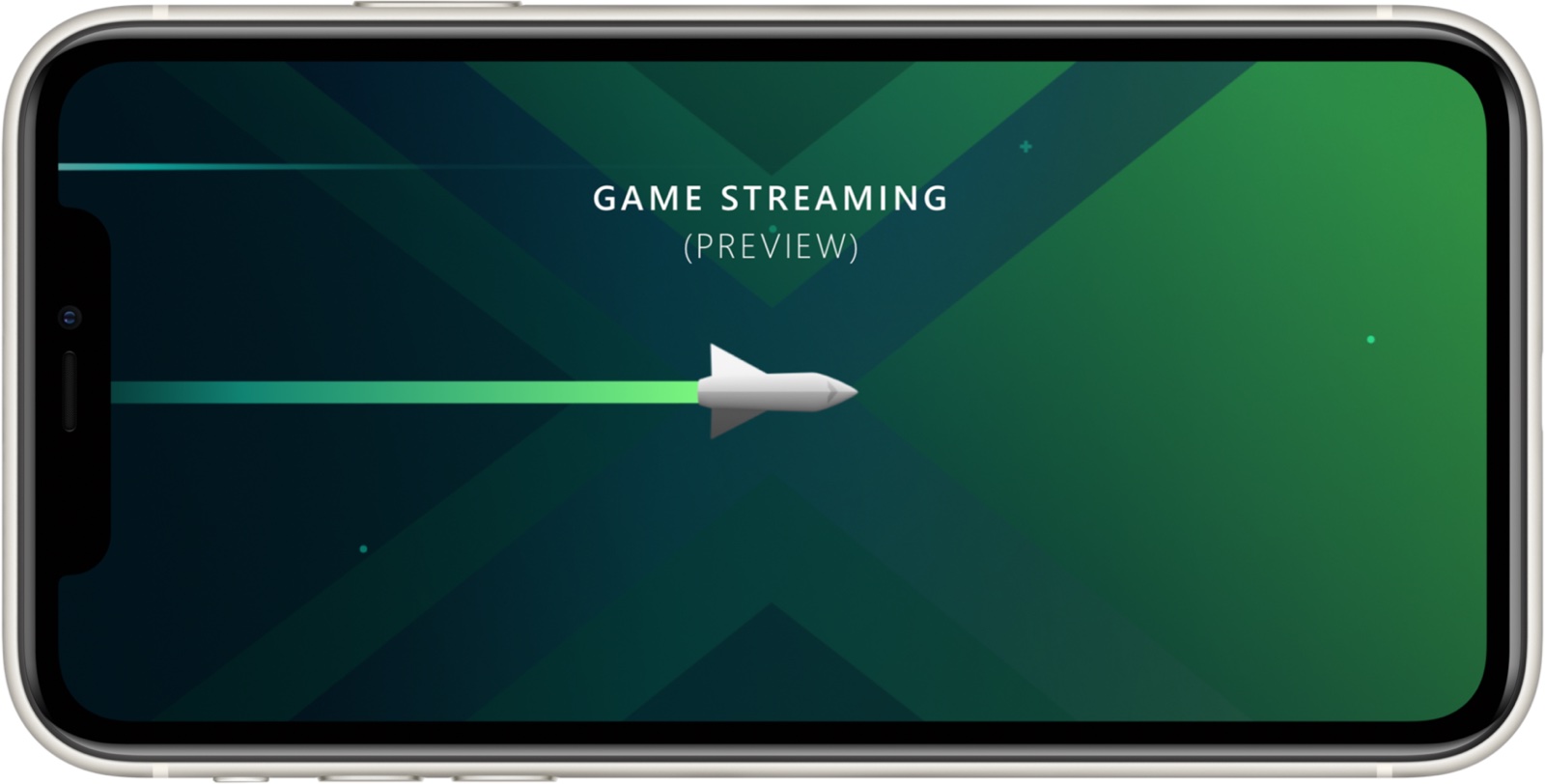 Xbox Game Pass and its accompanying xCloud streaming feature offer access to hundreds of games that can be streamed to mobile devices, and Apple says that because it can't review each game available through Game Pass, it can't be allowed on the App Store.

In a statement to Business Insider, an Apple spokesperson said that the restrictions are designed to protect consumers and provide a level playing field to developers.

"The App Store was created to be a safe and trusted place for customers to discover and download apps, and a great business opportunity for all developers. Before they go on our store, all apps are reviewed against the same set of guidelines that are intended to protect customers and provide a fair and level playing field to developers."

"Our customers enjoy great apps and games from millions of developers, and gaming services can absolutely launch on the App Store as long as they follow the same set of guidelines applicable to all developers, including submitting games individually for review, and appearing in charts and search. In addition to the App Store, developers can choose to reach all iPhone and iPad users over the web through Safari and other browsers on the App Store."
Click to expand...

Project xCloud, a new arm of the Xbox Game Pass feature that lets users download games to a PC or Xbox, will provide streaming access to more than 100 games for $15 a month, with games able to be played on smartphones and tablets. It's designed to be like Netflix for games.

Microsoft made a TestFlight beta available for Project xCloud earlier this year, but it became clear yesterday that xCloud isn't going to be available on iOS devices at launch.

In a statement, a Microsoft spokesperson said that the company wants to make Game Pass available on all devices, but there's no info on iOS at this time.

"It's our ambition to scale cloud gaming through Xbox Game Pass available on all devices, but we have nothing further to share at this time regarding iOS."
Click to expand...

Microsoft has known that it would be difficult to launch the streaming gaming service on iOS since beta testing began. When the TestFlight version of the app was released for iOS users, Microsoft said that the preview experience would "look and feel different" on iOS because of Apple's limitations. iPhone and iPad users testing the feature could only stream games from the cloud and not from an Xbox console, eliminating the pick up and play on any device option.

Microsoft was also only able to make one game available on TestFlight, "Halo: The Master Chief Collection" because Apple's App Store rules require games in a game subscription to be owned or licensed by the developer.

Valve also ran into trouble when attempting to make Steam Link available on iPhones and iPads, with Apple rejecting the app after it was submitted for review.

Valve was ultimately able to launch the app by removing the ability to purchase apps from within the Steam Link store, which may have led Apple to ultimately approve the app.

Steam Link is designed to allow you to play your own Steam games on an iPhone, iPad, or Apple TV, streaming from a Mac or PC, so it is somewhat different than Google Stadia and Project xCloud, services that make a catalog of games available.

Update: In a statement to CNET, Microsoft said it does not have a path to bring its app to the iOS App Store.

Our testing period for the Project xCloud Preview app for iOS has expired. Unfortunately, we do not have a path to bring our vision of cloud gaming with Xbox Game Pass Ultimate to gamers on iOS via the Apple App Store. Apple stands alone as the only general purpose platform to deny consumers from cloud gaming and game subscription services like Xbox Game Pass. And it consistently treats gaming apps differently, applying more lenient rules to non-gaming apps even when they include interactive content. All games available in the Xbox Game Pass catalog are rated for content by independent industry ratings bodies such as the ESRB and regional equivalents. We are committed to finding a path to bring cloud gaming with Xbox Game Pass Ultimate to the iOS platform. We believe that the customer should be at the heart of the gaming experience and gamers tell us they want to play, connect, and share anywhere, no matter where they are. We agree.
Click to expand...

With the recent news of that exploit/hack using Microsoft O365 then somewhat good.
Reactions: buddhistMonkey, Tagbert, bwillwall and 36 others
S

Wags said:
With the recent news of that exploit/hack using Microsoft O365 then somewhat good.
Click to expand...

Lol no you don't get it, you shouldn't be talking about it
Reactions: happygodavid, PC_tech, turbineseaplane and 38 others

This is so ****ing ********, crazy how Apple can give the middle finger to its over 1B devices who want to enjoy game streaming because they have a MONOPOLY
Last edited: Aug 7, 2020
Reactions: max.ine, V.K., rumormiller and 58 others

There's nothing Apple loves more than a monopoly. Of course they denied this app! It competes directly with their Arcade service. Apple hates competition.
Reactions: PinnyHead, max.ine, rumormiller and 65 others

I personally won’t miss xCloud on iOS since I have my bases covered regarding gaming, but this is a horrible policy from Apple, and they are really playing into the hands of their competitors and those who claim they have too much control.
I mean, trying to resist cloud streaming service like this is just tone deaf.
Reactions: chilly willy, V.K., happygodavid and 43 others

This is getting ridiculous at this point. We're not babies. Just put a warning label or whatever and allow it on the App Store.
Reactions: miniyou64, rumormiller, happygodavid and 44 others
G

So they should block every mirroring PC screen app as well, cause they also can’t review every app/game that we can stream to iOS screen.
Reactions: PinnyHead, V.K., Fraye and 40 others

Couldn't you just update yesterday's article about this?
Reactions: Surfer13134 and mazz0

I've been using Google Stadia lately, and it's pretty great despite the limited game selection. Has many advantages:

- Play games that you otherwise can't on Mac
- Games run on server and "load" super fast
- Great graphics even on low-end system, don't need fancy graphics card
- No long downloads, patch downloads, or games taking up 10s of GB in HDD space
- Much better battery life on mobile devices
- Pick up where you left off on a different device
- Makes cheating harder

By following Apple’s logic they’ll soon block Netflix, Prime Video and... YouTube, a place that Google couldn’t be able to review each video.
Reactions: PinnyHead, V.K., rumormiller and 69 others

Interesting, has Apple's team also reviewed every video on Youtube, Netflix, Prime, iPlayer as well as all the books on Kindle? I'd hate to stream some content that hasn't met with their approval.

Yet video streaming apps are still allowed...
Reactions: Fraye, decypher44, bwillwall and 40 others

This is just moronic. Why is Apple hell bent on driving away customers?
Reactions: V.K., decypher44, bwillwall and 24 others
A

Can't review each game? Do they review each movie or show on Netflix or Prime? How is that different?
Reactions: miniyou64, milkrocket, Fraye and 59 others
S

Not a good look from Apple. I suspect this policy will be changing shortly with all of their anti-trust reviews that are occurring.
Reactions: rumormiller, PC_tech, decypher44 and 40 others

gustaw94 said:
So they should block every mirroring PC screen app as well, cause they also can’t review every app/game that we can stream to iOS screen.
Click to expand...

I believe that Apple is making a stupid mistake here.
Reactions: rumormiller, decypher44, Tagbert and 30 others

Hmm. No coincidence that Apple also offers a gaming service (despite its inferiority), or that the media from other subs’ which offer content are not scrutinised.
Reactions: decypher44, Agit21, TantalizedMind and 8 others

UndefinedxJoker said:
This is getting ridiculous at this point. We're not babies. Just put a warning label or whatever and allow it on the App Store.
Click to expand...

Every day i read something Apple negative like that in the news.
Im getting closer and closer to ditch my Apple stuff, they are seriously $@$*! me off.
If US & EU Antitrust don’t get them under control, I’m gone.
It’s staring to feel bad, supporting Apple by buying and using their devices.
Reactions: rumormiller, decypher44, SoN1NjA and 32 others
R

Apple seems to be begging for anti-trust action against them.
Reactions: V.K., rumormiller, scalawagabond and 47 others

Reason077 said:
I've been using Google Stadia lately, and it's pretty great despite the limited game selection. Has many advantages:

- Play games that you otherwise can't on Mac
- Games run on server and "load" super fast
- Great graphics even on low-end system, don't need fancy graphics card
- Much better battery life on mobile devices
- Pick up where you left off on a different device
- Makes cheating harder

I'm convinced: Streaming is the future of games.
Click to expand...

It's not the "future" but it is certainly part of it for the reasons you've laid out. Purists will always want the speed and fidelity that a local system can provide; physics gets in the way of streaming winning out entirely (looking at you lag!).
Reactions: Crow T Robot, Catman8976, 4nNtt and 5 others

The big issue I see with using these services on mobile is the data usage must be through the roof.

I guess that lots of the "unlimited" data plans are not truly unlimited and as soon as you start streaming games for hours on end you'll end up going over fair usage policy.

And this sort of puts Microsoft's "strategic alliance" (whatever one makes of that) with Samsung during the Unpacked event yesterday into perspective.
Reactions: scalawagabond, bwillwall, User 6502 and 2 others
E

Welp, that Pixel 5 is looking even better.

Not trying to say that as a hot take. But these restrictions are completely out of control. Especially as someone who loves game pass. I mean I was even thinking about getting an iPad pro. But **** it, I'll just get a Samsung tablet. Idk man, I can't understand how people continue to constantly defend Apple with this.
Reactions: John Young, decypher44, bwillwall and 19 others
You must log in or register to reply here.
Share:
Facebook Twitter Reddit Email Share Link
Register on MacRumors! This sidebar will go away, and you'll see fewer ads.
Sign Up
Top Bottom