While we already knew the iMac Pro will be the fastest Mac ever, at least until Apple releases its promised modular Mac Pro at some point in the future, now we have an idea of just how fast the desktop workhorse will truly be.

YouTube reviewers Marques Brownlee and Jonathan Morrison have each shared hands-on videos of the iMac Pro, and put its CPU performance to the test with benchmarks on Geekbench, which simulates real-world workload scenarios.

The 10-core iMac Pro is also up to 93 percent faster than the latest 27-inch 5K iMac with top-of-the-line tech specs. 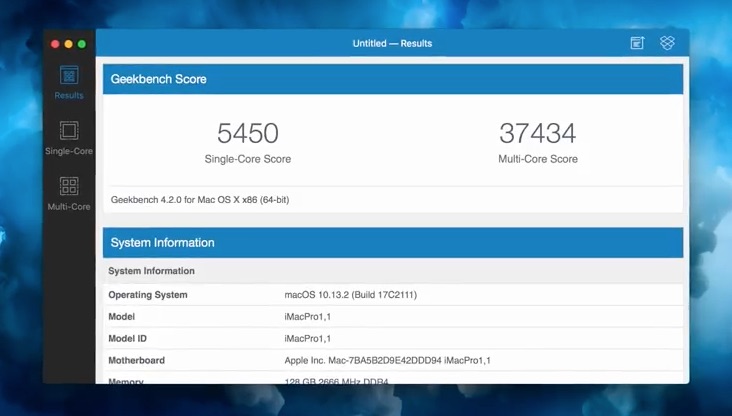 Apple said the iMac Pro can be configured with an even faster 18-core Xeon processor, so the 10-core benchmarks aren't even the peak. The 18-core iMac Pro will unquestionably be the fastest Mac ever by an almost unimaginable margin.

iMac Pro can also be equipped with up to 4TB of SSD storage, up to 128GB of ECC RAM, and an AMD Radeon Pro Vega 64 graphics processor with 16GB of HBM2 memory, which helps to power its beautiful 5K display.

Article Link: Mid-Range iMac Pro is Nearly Twice as Fast as High-End 5K iMac and Up to 45% Faster Than 2013 Mac Pro

I wish there was a 2017 Mac Pro to compare to the 2013 Mac Pro.
Reactions: ecommerceedward, badNameErr, kyjaotkb and 16 others
D

dominiongamma said:
Every year computers get faster who knew ;-)
Click to expand...

Can’t wait to see what they got for the new Mac Pro...
Reactions: DeepIn2U

Am I the only one who thinks the iMac Pro looks weird? The Space Grey makes it look like its permanently being photographed in a badly lit room >.>
Reactions: DeepIn2U, Lone Deranger, Fzang and 1 other person

I know right? Seems pretty unfair. Almost as unfair as still selling that 2013 tech as new product in 2017.
Reactions: OlegOlesyaKotovRozovsky, heffsf, Substance90 and 10 others

This article brought to you by Moore's Law, still going strong and predictable after 50 years.
Reactions: Macaholic868

Who would have thought!?
Reactions: Macaholic868

Can you imagine how fast a computer they COULD build if it weren’t for their weird obsession for thin computers (that aren’t portable).

The Mac Pro 2013 isn’t that fast so this achievement isn’t that great.
Reactions: Helpfixit, Macaholic868, FrankeeD and 4 others
A

At least you can choose your monitor with the 2013.
Reactions: Macaholic868, FrankeeD and Lone Deranger
I

Ssshhh.... you’re not supposed to mention that.
[doublepost=1513095244][/doublepost]Now that this is done, Apple can finally focus on the Mac Mini....
Reactions: DeepIn2U

Not for the pros in the target market. They can cover the cost in a couple days, a week or maybe a month at the outside.
Reactions: eatrains

RoelJuun said:
Can you imagine how fast a computer they COULD build if it weren’t for their weird obsession for thin computers (that aren’t portable).

The Mac Pro 2013 isn’t that fast so this achievement isn’t that great.
Click to expand...

What’s missing, that you want a thicker box?

And Intel is responsible for the lack of CPU speed improvements, right?

I initially processed the headline as Sarcasm to Apple Tech.

egodspeed said:
Yah, and it ONLY took four years to bump it up 45%! Amazing!

Macrumors comments are so predictable.

This is the first Pro computer Apple has released since 2013. There is no benchmark. A similarly configure workstation with the same hardware costs around the same price.
Reactions: Ener Ji

Favourite Consumer of the year!
B

I assume many people interested in the iMac Pro are people who own and use MP6,1's daily for their workload. Thus I would say comparing the 2013 MP6,1 and the new iMac Pro is a reasonable thing to evaluate. I guess another comparison would be to take the latest high-end iMac and compare that with the iMac Po.
Reactions: SeminalSage
V

Its a detail that doesn't need to be there, it detracts from the thinness of the display. The iMac was designed to be thin as paper so you can cut your finger on it. Of course, IF YOU'RE STILL LIVING IN THE PAST.... we have a 3.5mm jack adapter available for $99.
Reactions: splitpea

I think I, and most other people reading this, would prefer a comparison between the iMac Pro and the MacBook Pro as far as speed goes.