Developer Mojang today announced that Minecraft players on iOS, Android, and Windows 10 will soon be able to browse an all-new "Marketplace," where they'll find skins, mini-games, textures, and worlds designed by other players, creators, and community members. The company said this marks the first time players will be able to download and play community creations directly from within Minecraft itself.

Not everyone will be able to post creations and sell them on Marketplace, however, as Mojang first requires creators "with a registered business" to submit an application to be included on the store. At launch, well-known Minecraft creators on Marketplace will include Noxcrew, BlockWorks, Qwertyuiop The Pie, Blockception, Sphax, Eneija Silverleaf, Imagiverse, Polymaps and Razzleberry Fox. Mojang said that the update will give creators another source of income from the game. 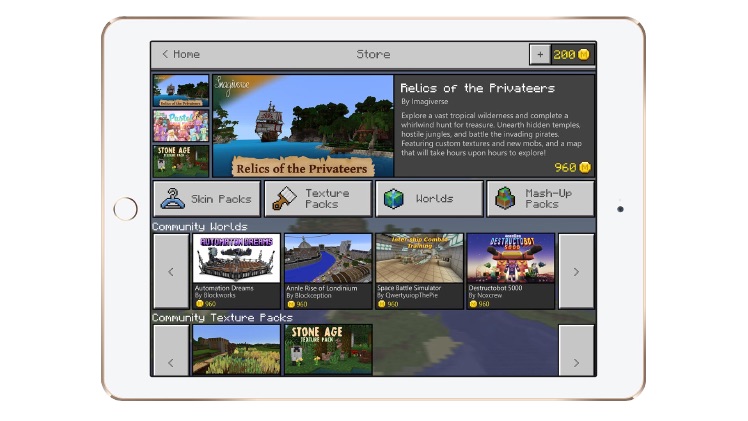 The idea is to give Minecraft creators another way to make a living from the game, allowing them to support themselves in the creation of ever-greater projects, while giving Pocket and Windows 10 players access to a growing catalogue of fun stuff - curated and supplied by us, safely and simply. And, of course, you can still manually download free community creations you've found out there on the internet, too.
Click to expand...

Marketplace will include a new currency called "Minecraft Coins," which users will obtain through in-app purchases on iOS. This will allow creators to choose flexible prices "and take their share of what they sell," according to Mojang. The company took into account Apple's 30 percent cut from IAPs, saying that creators will "get the majority" of the profit after Apple -- and the other app store platform owners -- take their cut.

Items and content purchased in Marketplace will sync across every version of Minecraft that users have logged into their Xbox Live account on. Mojang mentioned that it's in talks with platform partners, like Apple, to figure out how to ensure all of a user's content syncs across multiple company ecosystems.

Marketplace will be part of The Discovery Update, which Mojang intends to launch later this spring. Before it debuts, Marketplace will see a beta test run on Android devices in mid-April as a way to test the functionality of Minecraft Coins, and the developer is asking users to leave feedback on all the news on its website.

Minecraft: Pocket Edition is currently available to download for $6.99 on the App Store. [Direct Link]

Yet another example of Microsoft ruining the game.
Reactions: Cameroncafe10a
F

Will this marketplace be blockable (like in-app purchases)? I speak as a parent!!!!
Reactions: Appleaker, Cameroncafe10a, KAZphoto and 2 others

Sucks that you have to be a registered business, but I can see why they'd like to avoid the cluster that is Steam and all the copyright claims for modded content. I do freelance design and have made a number of Minecraft skins over the years, so it would be neat to make a few bucks per month off of those, but I guess that's not gonna happen.

My son will be thrilled... I am not.
Reactions: 69Mustang
M

You can upload skins to Minecraft PC and Pocket for free.... use a skin stealer app and its really easy, or you could just make your own using one of the many skin creator apps. Who, in their right mind, would pay for skins?
Reactions: Appleaker
You must log in or register to reply here.
Share:
Facebook Twitter Reddit Email Link
Register on MacRumors! This sidebar will go away, and you'll see fewer ads.
Sign Up
Top Bottom