I've read so many overwhelming positive, glowing reviews of Mojave that I went all in on day 1. Well day 2 but close enough.

First of all, I'm just glad it installed properly without any problems of note.

My initial impressions after just a couple of hours of use is that this is much to do about nothing.

Speed: not any faster than .12. Actually, it definitely feels slower. It initially felt like the transition from OS 9 to 10.1. Nowhere near as sluggish as 10.0 of course, but ranks right there with 10.1 and 10.4 in sluggishness.

edit: 4k 60fps video clearly has more lag then under Sierra. With Sierra, these videos hiccuped for a bit then resumed playing. With Mojave they hiccup then there's a circular icon then the video resumes. Certainly an additional visual distraction at least.

I turned off motion and transparency and that helped noticeably. However, apps still open more slowly than under 10.12. This is very disappointing as I have read that Mojave was supposed to be noticeably faster than H.S. which benchmarks show to be neck and neck with Sierra.

Esthetics: I find the new look to be a bit of a distraction. I can't really pin it down to one thing or even several, but the new look is disorienting and doesn't serve any positive purpose. Dark mode doesn't help me much if my browser or other apps aren't compatible.

Plus, the default settings render normal use considerably slower. I almost want to use the term 'laggy.'

edit: icons default are larger and more colorful. The little msg tab announcing a new track for iTunes for example, is larger, the edges rounded now, and the box is grey. I don't like it as much, quite frankly.

Compatibility: I haven't tested every app obviously but steam pinball isn't working properly. It doesn't work in the highest res setting. I haven't used this app in many weeks but still it'd be nice if it worked when I want it to. iTunes and word are definitely slower to start.

So far, I don't see what the holabalooo was all about. It looks different, I get that, but .12 seemed to be working fine for the most part and was clearly speedier especially comparing default modes.

Security is supposed to be better but that's not a tangible performance gain that I can see and feel right away in use. Not to mention there was a day 1 vulnerability discovered which hasn't been patched yet.

I'll be inquiring into reverting to .12 shortly. I thought I would really like the look and anticipated a bit of a speed boost but neither's the case, clearly.

This is a very disappointing update. I don't recommend it at all.
Last edited: Sep 25, 2018
Reactions: dzj and Howard2k
T

I was fired up about this update. The Macs get no love from apple anymore so perhaps I was a little too invested in the success of Mojave.

I used to read about all of the problems with .0 releases on macintosh and thought all of those people were suckers for adopting so early. This time, I read so many "mojove is a can't miss upgrade" that I threw caution to the wind and I am in fact bummed out by how underwhelming this version of OS X is.

I'll be reading up on the reverting to Sierra thread and reading elsewhere about it. If anyone is using a similar system: I have a 2015 13" mbp with 8 gigs/256 ssd, I don't recommend Mojave.
T

In iTunes, the bar moves in discrete steps, around two steps per second, but the movement is not synchronized. It just chugs along step by step out of sync. Every other step it 'slides' forward a little, instead of taking a 'step' forward. It looks so amateurish.

Dark mode in safari looks like a skin pilfered from those sites for the chrome browser. It looks again amateurish, and not very polished.

The box for the password to sign and the font for the username are larger; it doesn't look as sleek as in Sierra. Same for the overall look: the fonts are a size too big, the litheness and elegance are gone.

It's like a kid drew in large wide broad strokes on an etch a sketch.

Who designed this monstrosity?

I won't be upgrading to Mojave on my 2015 MBP. HS works fine for me and I'm sticking with that. First time in a long time I haven't upgraded my Mac's operating system.
T

Garbage update. I put the computer to sleep late last night then woke up to find it very warm. The battery had lost 40% overnight.

What kind of monstrosity is this? 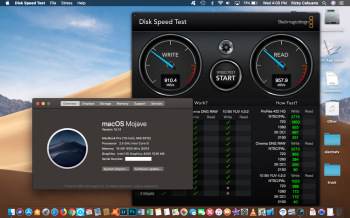 I did a clean install and so far so good. But it’s only been a few hours.

Actually I may have a problem with my printer, but haven’t had a chance to properly diagnose. Jury is still out.

HS was pretty poor so if I have the same issues you do then it’ll be a clean install of Sierra.

The most telling issue I had moving from Sierra to High Sierra was a noticeable increase in instability, especially when sleeping, and an increase in battery drain while sleeping.

I’m sure Mojave will be an improvement on High Sierra, but I won’t be disappointed going back to Sierra is that’s the case. I waited until .5 to go to High Sierra so didn’t suffer it for long, but long enough.
Reactions: tommyhayes
T

I already restored Sierra. The upgrade f'ed up my iTunes library so I'm restoring it now through trial and error in the background.

I just hope my computer doesn't overheat overnight. What the f is up with that?!? I've never had that happen, ever. Not when I put the computer to sleep.

Again, two years of development by the wealthiest company on the planet and all you get is a buggy, slow, ugly downgrade with huge fonts and icons. Not to mention it breaks game software which makes very minimal demands on the graphics card. Not to mention the game play and video playback is SLOWER.

This is a garbage update.
[doublepost=1538012209][/doublepost]I restored my iTunes library but lost all of the date added and ratings info. I hate apple.

Yes, I have high standards but this is the largest/wealthiest and potentially must influential company in the world.

Mojave is a mess esthetically. The default icon and text sizes are a bit larger, making them easier to see, but the fonts are thinner which makes them a little more difficult to read. They can't make a design decision and stick with it.

Dark mode looks like the amateurish skins for chrome you find all over the net. It's not ugly per se but looks like the product of someone ham handed and the final result is very unpolished.

What's strange is how much praise this OS update has received from everyone. It's like the media conspired to rate this update highly. Which isn't surprising. They get a media release from apple and it's copied and pasted to their website with a few superlatives thrown in. But why did I buy the hype this time? I'm usually pretty skeptical.

It's because Mac is now the neglected stepchild of the apple family so any time it's shown any attention I get excited when I really have no reason to.

There's no other conclusion to reach other than that apple has hired a bunch of hacks not on the basis of talent, but based upon other considerations and this is leading to very poor quality product releases on the hardware and software side.
T

Woke up the computer after I woke up and after the Sierra reinstall, the computer is cold to the touch, as it should be. No battery drain either.

What did I lose after reinstall?

1. song ratings in itunes
2. date added tags in itunes
3. all but one of my audiobooks is missing. Most had been deauthorized anyway with the '15 rmbp since I had lost my account passwords from a previous computer.
4. Maybe 4-5 hours of my time or more installing Mojave then reverting to Sierra and trouble shooting with both installs.

edit:
5. I lost a fair bit of album artwork along the way.

I do have a greater appreciation for Sierra.

This is two strikes in a row for Mac OS. Two years of development. I can't understand how they don't hit this out of the park. All Mojave adds is stacks, dark mode, and some extra security features. This should not prove especially difficult.

tommyhayes said:
Woke up the computer after I woke up and after the Sierra reinstall, the computer is cold to the touch, as it should be. No battery drain either.

What did I lose after reinstall?

1. song ratings in itunes
2. date added tags in itunes
3. all but one of my audiobooks is missing. Most had been deauthorized anyway with the '15 rmbp since I had lost my account passwords from a previous computer.
4. Maybe 4-5 hours of my time or more installing Mojave then reverting to Sierra and trouble shooting with both installs.

edit:
5. I lost a fair bit of album artwork along the way.

I do have a greater appreciation for Sierra.

This is two strikes in a row for Mac OS. Two years of development. I can't understand how they don't hit this out of the park. All Mojave adds is stacks, dark mode, and some extra security features. This should not prove especially difficult.