Monument Valley 2 creators Ustwo Games today posted a new story on Medium (via The Verge) that highlights the first-year numbers and growth of the popular mobile sequel. Although there are numerous points of data to look at, one notable standout is that Monument Valley 2 earned $10.4 million in the one year period that began on June 5, 2017 (the game's launch day) through June 4, 2018. 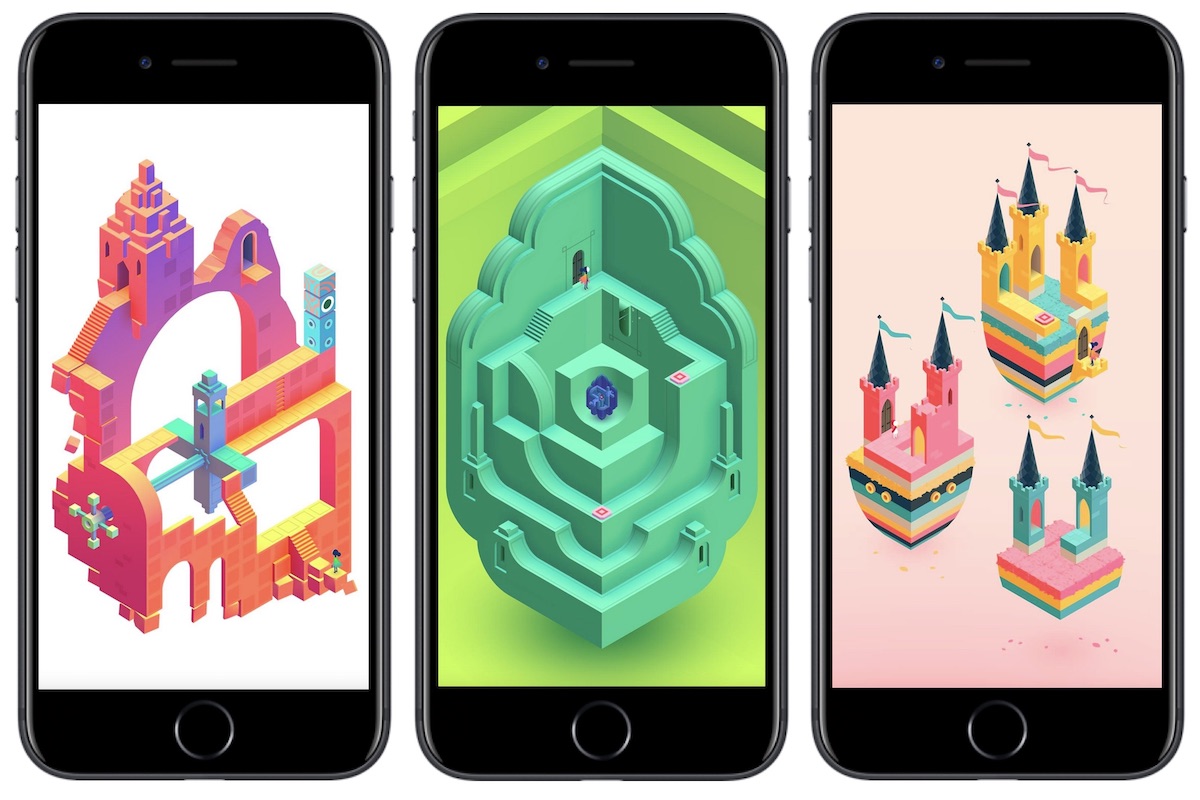 In comparison, the original game's first-year revenue locked in at $5.8 million back in 2015, meaning that the sequel proved to be far more popular than the first Monument Valley and nearly doubled first-year revenue for Ustwo Games in the process. One major factor in the success of Monument Valley 2 was its surprise unveiling onstage at WWDC 2017, and its immediate availability later that day in the iOS App Store. 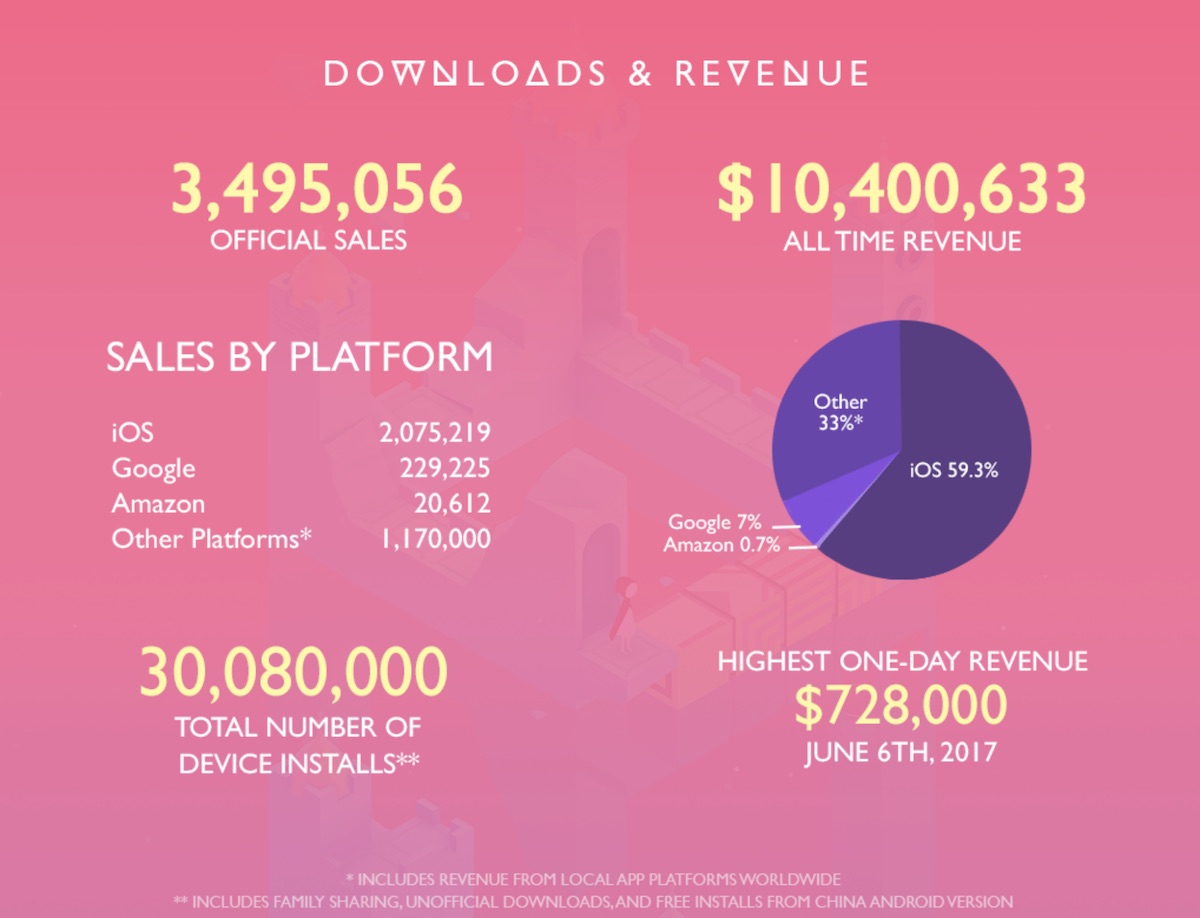 Infographics via Ustwo Games on Medium​

China was a huge factor in Monument Valley 2's success this past year, with the game offered as an initially free download on Android in the country. China accounted for 91.4 percent of the game's unique installs, compared to 2.7 percent in the United States. China also made up for 62.3 percent of purchases for the game in its first year, followed by the U.S. at 16.3 percent, the United Kingdom at 2.7 percent, Germany at 1.9 percent, Japan at 1.8 percent, Canada at 1.5 percent, and France at 1.3 percent.

Ustwo Game's new infographic also has a few "fun facts," including that 53 percent of players who began Monument Valley 2 finished it, and that the player base took over 2.2 million screenshots while playing the sequel. In total, the developers had to keep work on their follow-up game a secret for 490 days before it was ultimately revealed at WWDC 2017. Over its entire development cycle, it took 16 core team members 70 weeks to finish the game at a development cost of $2.3 million.

Speaking to The Verge, Ustwo Games studio head Dan Gray talked about the company's resistance to going the freemium route with its games and the opinion by some in the industry that premium mobile games have died. "I think it has kind of plateaued," he explained. "It definitely hasn't died, which is what everyone said every year for the past six years." 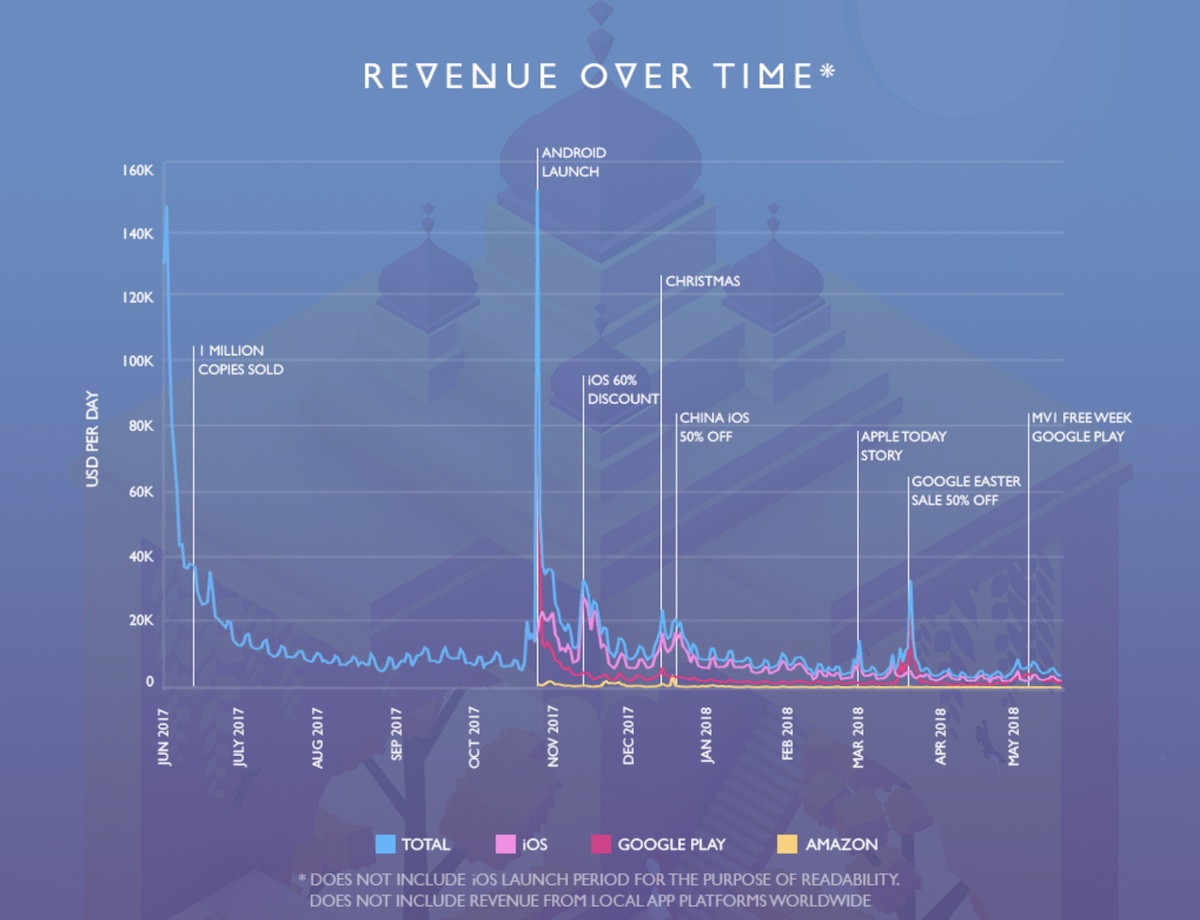 In the Medium post, Gray explained that the company likes to share its data to help out other developers, who can "get a handle on what they might expect from a successful premium launch," and further the resistance to games that focus on in-app purchase payment structures. Monument Valley has become such a success in this field that other teams reportedly use "an MV" as a unit of measurement when forecasting success of their own games to investors, saying their game could launch with "X percent of an MV."

"It's harder and harder to make successful, premium, paid mobile games," says Gray. "So I would rather help people out." He says that the community of premium mobile game developers is very communicative, sharing details like release dates ahead of time to avoid clashing with each other. "It's kind of like this secret society of people trying to help each other out," he says.
Click to expand...

Monument Valley 2 launched with a price tag of $4.99 on the iOS App Store, and has seen a discount to $1.99 a few times over the last year. Thanks to the one-time purchase, players get access to the entire game, which spans 14 chapters of puzzles of increasing difficulty. Although he didn't specify what Ustwo is working on next, Gray said that he wants to use Monument Valley 2's success "to do some really risky projects that no one is taking risks on."

Wow. It’s such a great game so I’m glad to see them rewarded for their hard work.
Reactions: TechZeke, Lennyvalentin, schneeland and 5 others

Corrode said:
Wow. It’s such a great game so I’m glad to see them rewarded for their hard work.
Click to expand...

Yep. I got this game on iOS for my youngest and on Android for me. But he's right. The safest bet in mobile gaming is IAP. We vote with our dollars and collectively (generally speaking of course) we voted IAP in a landslide.
Reactions: decafjava

Really happy for the devs, I am one of the 47% who haven't finished the game (yet). The game is very well-crafted and I try to support devs who charge up front when I can-which means I have paid for a few games/apps I didn't like but I usually read reviews from pros and users before deciding.
Reactions: 69Mustang
D

I sure hope they come out with a MV#3. I just loved 1 and 2.
Reactions: Lennyvalentin

Android users in China accounted for most of the sales?!?

That can't possibly be right.

*Given conventional wisdom on who pays and who doesn't.
X

This is one app i bought without thinking because I knew it would be good. I loved the first one and the second one was even better. If you haven't picked up either, you should consider it.

This is fantastic news. Seems certain they will either do an expansion or make MV3.

Shows that hard work to develop a quality experience pays off.

But in the end many devs sadly choose to just make candy crush clones and call it a day.
Reactions: DotCom2
D

The first one was better. Several of the levels in two are more like walk-thoughts, not much puzzle solving.
G

The Monument Valley series is such a fantastic pair of games. Getting Monument Valley 2 and Alto's Odyssey within a year of each other was an excellent treat for mobile gamers.
Reactions: jonnyb098

The first game was so much better, I feel like they really dumbed down the game for version 2. It was to easy to beat compared to the first. It is a beautiful game though
Reactions: RedBear and linkmaster02
K

I commend them for sticking to the up-front-purchase model. It is unfortunate that in-app purchases have become the more profitable business model for mobile-game developers.

I find it a lot harder these days to ‘unlock’ a freemium, ad-based game through in-app purchases. The freemium model diminishes the value of the game to me and I am much less likely to spend any money at all on it. In fact, I rather delete such games immediately, because I do not tolerate ads anymore. I used to love the Cut the Rope games, for instance, which used to have an up-front-purchase model, but are now completely freemium. The fact that they are trying to get me to buy consumables and unlock the game via a ‘starter pack’, made me lose interest in the series completely.
Reactions: DotCom2, Lennyvalentin, grad and 1 other person

KALLT said:
The fact that they are trying to get me to buy consumables and unlock the game via a ‘starter pack’, made me lose interest in the series completely.
Click to expand...

Consumables are teh devil, as far as I'm concerned. My phone is not a friggin' coin-op machine goddammit! Also, my pocketbook is not some game dev's petty cash reserve which they can reach into at their leisure.

I don't mind "freemium" games with starter packs as long as the starter pack buys the entire rest of the game, without needing to buy any consumables or anything else of that sort. Like, Limbo sequel Inside for example, although I didn't actually buy that one because the demo was so damn depressing. Why's everybody gunning to kill that poor kid...? What's he done to deserve something like that?

Oh well. It WAS really well-made though.

Loved both Monument Valleys, by the way. Finished both of them, as well as the DLC!
L

Well deserved. There aren’t that many iOS games I’ve enjoyed more than both Monument Valleys. Innovative and spectacularly designed. My only complaint is that I’m always left wanting more but I understand that making these levels is time consuming.
M

Android users in China accounted for most of the sales?!?

That can't possibly be right.

*Given conventional wisdom on who pays and who doesn't.
Click to expand...

China accounted for most of the downloads but not for most of the sales: "the game offered as an initially free download on Android in the country." Only 7 percent of revenue came from Android, so iOS still looks like the marketplace to be despite the larger Android marketshare according to this data.

In my opinion, the Monument Vally game and it's sequels are some of the best examples of gaming at it's best. Quality shines thru, and gains customer loyalty. If a third game in this series is released (hint), I will purchase without hesitation. Also, the continued support adds to the value as all games in this series plays beautifully on all my devices.
You must log in or register to reply here.
Share:
Facebook Twitter Reddit Email Link
Register on MacRumors! This sidebar will go away, and you'll see fewer ads.
Sign Up
Top Bottom