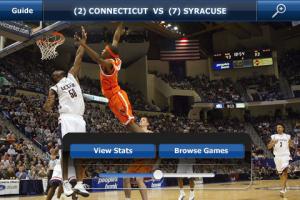 CBS has launched CBS Sports NCAA March Madness On Demand [App Store, $4.99] for the iPhone and iPod touch, offering a number of features related to "March Madness", the upcoming NCAA Division I Men's Basketball Tournament. Most notably, the application provides live video streaming of all games, but unfortunately the feature is limited to a Wi-Fi connection. Users on 3G or EDGE connections will only receive audio feeds.

The application is only valid for this year's tournament and will expire on April 6th at the conclusion of the tournament.

In addition to the new iPhone application, CBS will be offering its traditional live TV coverage and free online streaming throughout the tournament.

This is actually really awesome and priced reasonably.. I'm not a big basketball fan but if they could do this for NCAA Football next season consider me a customer.

The app looks very slick, and if the video quality is top notch I think this is going to be a huge hit. I can't wait for March Madness to begin and I'm not even a really big fan...but I'll be watching now!!
R

Do you guys know if there is a way with a jail-broken iPhone to spoof the phone into thinking it has WIFI when it is still on 3G. I seem to remember hearing about this a while back but couldn't find anything.
T

That's fantastic, I wish someone would offer a similar service for the premiership.
W

That's freaking awesome! but what a battery killer right? Watching a whole game on the iphone? And it could be said that if you have WiFi access you most likely have a real computer around.. or a tv. In any case, if I had an iPhone I would buy this app immediately. So cool. I <3 march madness
B

Wifi only.... kills it's appeal. As stated above if I have wifi I'll watch on my Laptop, no point unless it's 3g viewable. Nice thought though.

Why do people really think that 3G could really be optimal for that kind of video?

"but unfortunately the feature is limited to a Wi-Fi connection. Users on 3G or EDGE connections will only receive audio feeds."

Surely that's so there aren't lots of lost connections for starters?

Is it that hard to find a wifi connection?

Same goes with UK BBC iPlayer - doesn't mean it isn't great to have.

Gawd, makes me wanna' just hang out at the house and watch my 40" Sony Bravia LCD with Comcast HD! WiFi only Can they get a more useless app for the iPhone and still charge people $4.99...

well I love college basketball (go uconn!) and was disappointed to learn that I have to work at a conference on the first TH & FRI of the tournament.

just checked and confirmed the hotel has free wifi throughout so I will have to pick this up and give it a shot with my ipod touch...should be nice to get updates while traffic at the booth is slow...
A

Great App for the iPhone/Touch. Right price. Great revenue stream for CBS relative to what development effort was likely to be. Can't get this on a Blackberry!
I

I am happy with the app. If I am sitting at my desk at work I can still watch the games on my iPhone without the network police coming after me since they shouldn't be able to pinpoint my iPhone. (at least I think so. if not oh well I paid for the app so I am going to use it.)

If I am in my car or outside I can still listen to my favorite team while the game is going on. I think this is a good app and I am looking forward to using it over the course of march madness.

I plunked down $5 for this only to discover it doesn't include any means to enter your picks into the bracket and track them against results. WTF? What kind of NCAA Tournament app doesn't allow you to track your picks, especially for $5?
M

Tybee said:
I plunked down $5 for this only to discover it doesn't include any means to enter your picks into the bracket and track them against results. WTF? What kind of NCAA Tournament app doesn't allow you to track your picks, especially for $5?
Click to expand...

did you not read what this does??? it lets you watch games or listen to them

macfan881 said:
did you not read what this does??? it lets you watch games or listen to them

if you download CBS Mobile sprots its free i belive it lets you do picks and stuff
Click to expand...

Nope. Fantasy baseball and soon football, but no NCAA brackets.

I stand by my criticism that the omission of bracket tracking in a $5 app with no other usefulness than for the 2009 NCAA Tournament is inexcusable. Moreso since CBS already has all the infrastructure on their site (entered my brackets there tonight). And I won't be at all surprised if the streaming video is completely borked tomorrow.

Issues with today's round 1 broadcasts?

I am trying out the application to watch the first round games. I'm on a rock-solid home wireless network and my internet provider gives me a constant 15mbps or better download rate.

Games will stay on for a minute or two, followed by a dark screen with the message "Connection Error" "The NCAA march Madness On Demand application needs an active network connection to work. Please establish a network connection and try again. Thank you".

Anyone else experiencing this behavior?
M

no problesm with me i watched the first half of the Memphis game no problems quailty was decent just a slight audio lag but no bigge still great though im gonna try to watch the full UNC game Saturday i belive is when they play.

I'll eat my words. I used this all day at work (had one game going on the iPhone, another streaming on my MBP, and worked on my work desktop). Didn't have many problems, though it did seem to get pretty sluggish mid-afternoon. It worked noticeably better when there was only one game on. Still wish it let me see my bracket with updated results, but oh well. It's still a neat app.

Is there ANY good bracket app? Based on the reviews, the two or three apps that purport to allow you to enter and monitor your bracket(s) are either completely broken or won't let you put in your bracket now that the tournament's started.

t0mat0 said:
Why do people really think that 3G could really be optimal for that kind of video?
Click to expand...

So I generally ignore streaming video for phones because I really don't want to generally watch TV on my phone, and I wouldn't be able to stream in the few instances (e.g. train or plane rides) where I'd want to , but...

I noted this review on the app from Macworld:

... isn't this kind of video the kind of thing that is streamed over 3G networks by carriers? I don't have 3G (iPhone with EDGE, T-Mobile USA), but I thought that in the US, at least Sprint and Verizon offered streaming TV on their phones via 3G data services, and thought this feature was common in Europe and parts of Asia also.

The app seems notable in that it's a completely different payment model (if you watched a number of games on the $5 you paid, you would pay, I think, a lot less than you pay for streaming on demand via other carriers for a similar amount of video), and it does offer a nice, simple interface, much in the same way that Public Radio Tuner can only tune NPR stations but works incredibly simply and well for that purpose.

But I would think that, were AT&T's 3G roll-out not so problematic, this would be exactly the kind of thing that one would do over data services.

The fact that it can't be streamed over 3G makes it pretty useless for me. Of course I don't expect video quality to be as good on a 3G connection as on wifi, but when I'm in range of wifi, 99% of the time I don't need my iPhone as my main computer (and the quality of video on mmod.ncaa.com is excellent).

This is very cool, however it is only for a couple weeks and then it is over. I really want slingbox for iPhone and then this would be solved.

Tedeks said:
This is very cool, however it is only for a couple weeks and then it is over. I really want slingbox for iPhone and then this would be solved.
Click to expand...

I couldn't agree more...April is less than a week away and we were promised a Slingplayer submission to Apple by the end of March. Let's hope they make their deadline!
D