Netflix is reportedly testing a new tier of service for subscribers that supersedes the existing top tier Premium plan, according to Italian blog Tutto Android.

Titled "Ultra", the new plan would allow up to four devices to receive Ultra HD and HDR video, and audio streaming at the same time. In Italy, the tier is priced at 16.99 euros, or approximately $19.80. 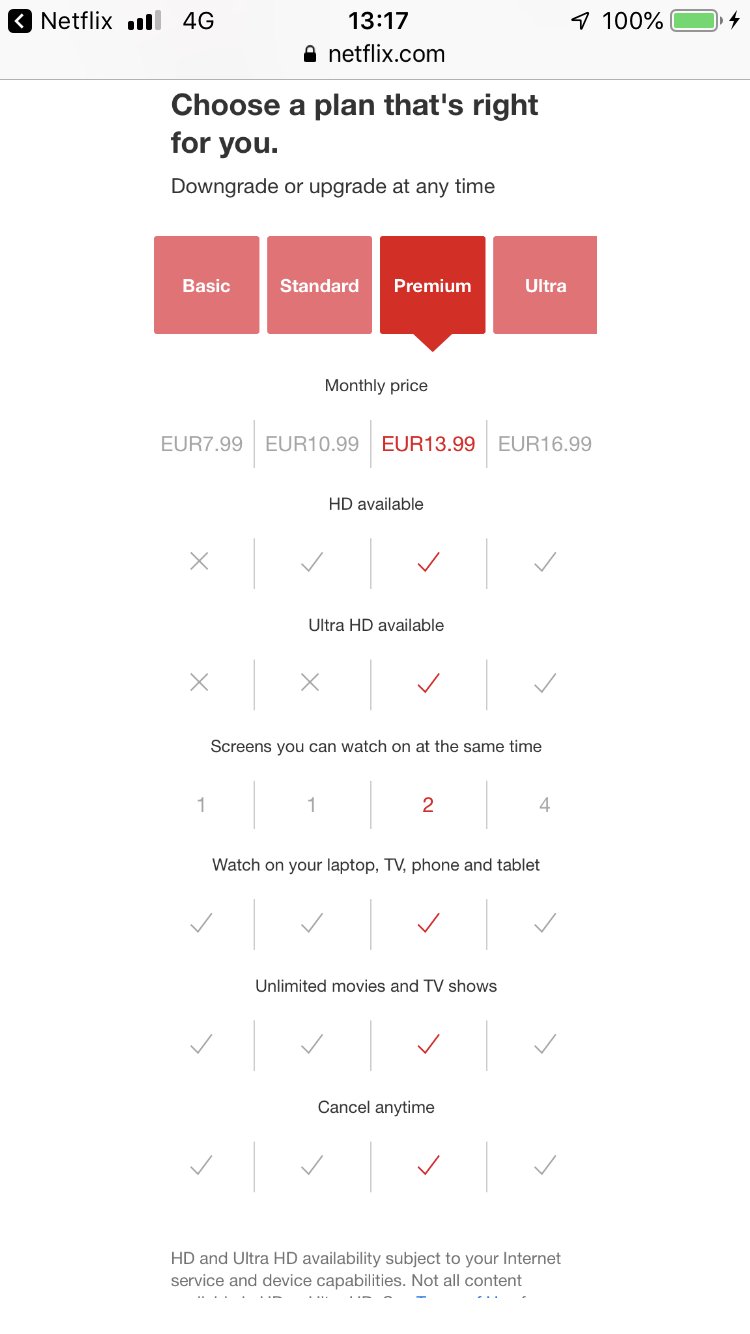 Image credit: Evan Davis​
Netflix has three subscription plans at present: Basic ($7.99), Standard ($10.99), and Premium ($13.99). Basic subscribers can watch Netflix on one screen at a time, Standard enables simultaneous viewing on two screens, and Premium allows up to four screens to be used at once to stream the service.

Commenting on the story, Netflix provided CNET with the following statement:

"We continuously test new things at Netflix and these tests typically vary in length of time," Smita Saran, a Netflix spokeswoman, said in an email. "In this case, we are testing slightly different price points and features to better understand how consumers value Netflix."
Click to expand...

Saran went on to say that not all Netflix subscribers would see the Ultra tier currently being tested, and the company many never offer the plan and its features to a wider base.

Promotional screens suggests that HDR would be exclusive to the Ultra plan, while the above screenshot implies that the number of simultaneous streams for existing Premium users would get reduced from four to two, with only Ultra subscribers getting four at the higher price. Similarly, users on the Standard plan appear to be getting only one stream instead of the usual two.

If the Ultra tier was ever to be officially adopted, it would essentially mean existing Premium users having to pay around $6 more for the same level of service they're used to.

Netflix has increased the price of its subscription plans in the past. Back in November the company hiked its Standard plan by $1 and its top Premium plan by $2.

Basically a price hike, as the top tier "Ultra" plan is not giving anything additional over what the premium gives now.
Reactions: vipergts2207, ohio.emt, jhfenton and 25 others
Comment

So long as the Premium keeps the 4K feed, etc. this is fine with me. We only upgraded to Premium for 4K, not extra simultaneous devices.
Reactions: TimSHB, imageWIS, yegon and 1 other person
Comment

Reminded me that I haven’t paid my cousin in 1,5 years. Ooops
Reactions: RevTEG, BeefCake 15, LCPepper and 16 others
Comment
F

They’re just halving the number of parallel streams for all packages, and adding a more expensive package that still has 4 streams.

The point is probably to cut down on account sharing.
Reactions: jhfenton, idmean, rynx9 and 7 others
Comment

They must have seen the news about AT&T raising their prices...
Reactions: RevTEG, rynx9, imageWIS and 4 others
Comment

Good luck with that, especially when they loose Disney/Fox content when they launch their own streaming service.
Reactions: ohio.emt, Zxxv, duervo and 2 others
Comment
R

what the article doesn‘t mention is that „ultra“ will offer 4K HDR and 4 simultaneous streams.

here‘s the whole overview (thanks @cordcutting): 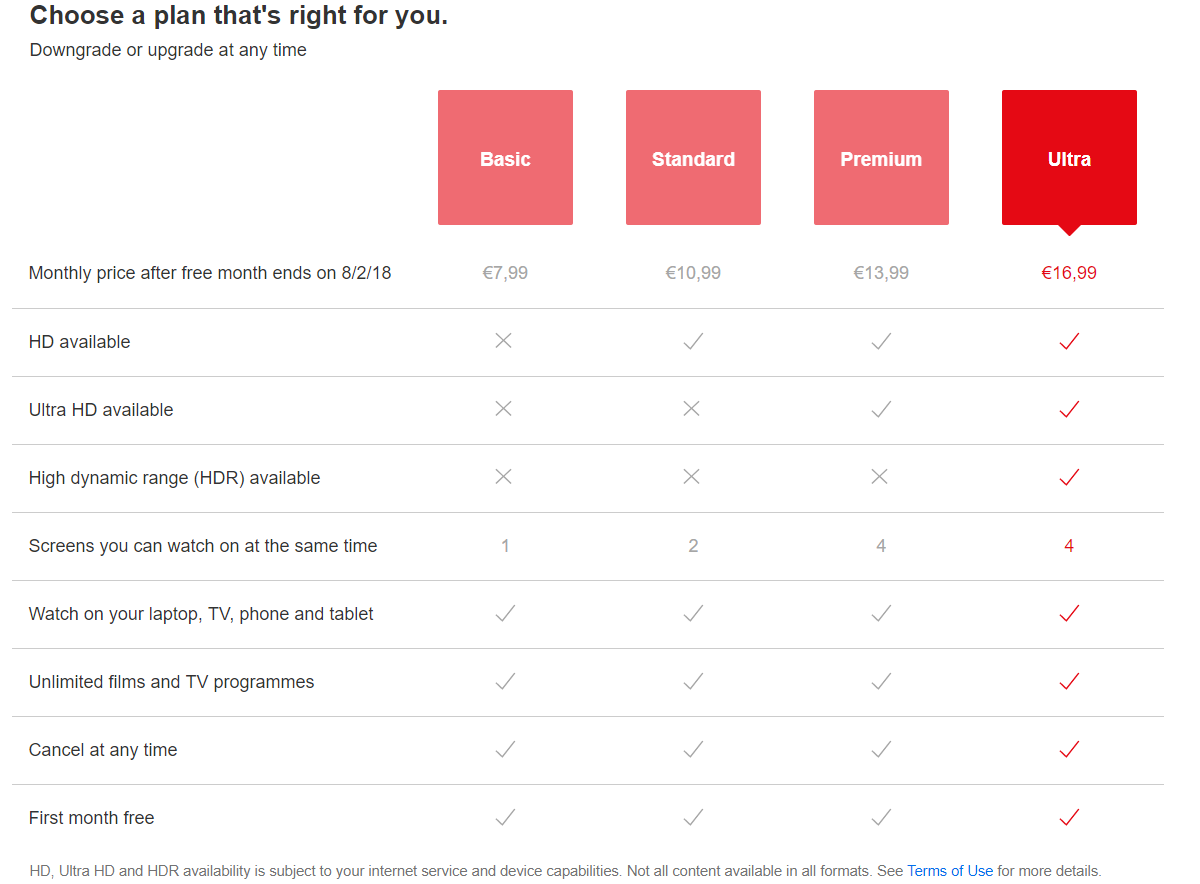 In others words, Netflix is testing a plan that reduces my subscription from 1 to 0.
Reactions: jerwin, kltmom, ohio.emt and 30 others
Comment

Enclavean said:
So.... raising the prices?

Good luck with that, especially when they loose Disney/Fox content when they launch their own streaming service.
Click to expand...

Yes, it will be interesting to see how losing this content this affects their memberships. I don't know what percentage of people signed up for Netflix because they added Disney/Fox content, but I don't think losing this content will really negatively impact their subscriber numbers.
Last edited: Jul 4, 2018
Comment

I'll not upgrade, I'll live with the lower tier, thank you very much.
Reactions: BeefCake 15, rynx9, Shirasaki and 7 others
Comment
S

If they go through with this I’ll never subscribe to more than basic. The price differences are not close enough to tempt me to pay more.
Comment

Premium has 4K but will no longer offer HDR? You can only get HDR from from the new Ultra plan?

That’s some shady nonsense there. No service I can think of has ever uncoupled 4K and HDR wherever available.
Reactions: ohio.emt, jhfenton, Zxxv and 20 others
Comment

Looks like this is the future for all of us.
Last edited: Jul 4, 2018
Reactions: oldhifi
Comment
B

What I find most frustrating is the difference in video quality through the tiers.
Comment

Daniel L said:
Basically a price hike, as the top tier "Ultra" plan is not giving anything additional over what the premium gives now.
Click to expand...

Sounds good to me and my Netflix stock.
Comment
R

"We continuously test new ways to hike prices at Netflix and these tests typically vary in decreases of service," Smita Saran, a Netflix spokeswoman, said in an email. "In this case, we are testing halving services and features to better understand how consumers get ripped off by Netflix."

I fixed your quote MR.
Reactions: velocityg4, RevTEG, Zxxv and 12 others
Comment

There's so much free content to watch on Tubi TV, Crackle and even VUDU, that besides the original content, it may make no sense to pay for Netflix.
Comment
J

RomanEmpire said:
what the article doesn‘t mention is that „ultra“ will offer 4K HDR and 4 simultaneous streams.

here‘s the whole overview (thanks @cordcutting):

This graph shows that the premium plan will keep the 4 simultaneous streams. The graph on the article showed 2.

Other websites with this article are also showing 4. I wonder where macrumors got this. Anyways, I hope it is 4 as in my household we use 3 and I don't want to pay more.
Reactions: RevTEG, rjp1 and linkmaster02
Comment
4

Getting harder to justify keeping the Netflix 4k with this lot. Streaming quality is OK but nothing to write home about. The app for my TV is useless for HDR anyway.

And finding it harder to justify keeping it. Maybe see what happens when I cease subs.
Reactions: Zxxv and tonyr6
Comment
J

javisan said:
This graph shows that the premium plan will keep the 4 simultaneous streams. The graph on the article showed 2.

Other websites with this article are also showing 4. I wonder where macrumors got this. Anyways, I hope it is 4 as in my household we use 3 and I don't want to pay more.
Click to expand...

I found my answer on another website. It seems like they are testing various versions of the new plans:

For some people, the offer left all other plans the same, while for others, it reduced the Premium plan's streaming to a maximum of two devices at once and removed the option for HDR, while dropping the Standard HD-only plan to a single stream. The new Ultra tier consistently offered 4K with HDR and a maximum of four streams.

In other words, they are still figuring out how many benefits to remove from lower tiers to entice customers to pay more on the higher tiers.
Reactions: jhfenton, Zxxv, Lazy and 2 others
Comment

Well, they may loose some subscribers over this. We will keep it, still cheaper than others. After all, Netflix is there to make money! Hopefully the service they provide in return is worth it.
Reactions: Kengineer
Comment

Look no one likes price increases but let’s be serious here people. You all want original content, that comes at a cost. Price increases happen. If you don’t like it, don’t let the door hit you on the way out. Netflix won’t notice you’re gone.
Reactions: fairuz, KGBguy and Kengineer
Comment
You must log in or register to reply here.
Share:
Facebook Twitter Reddit Email Share Link
Register on MacRumors! This sidebar will go away, and you'll see fewer ads.
Sign Up
Top Bottom