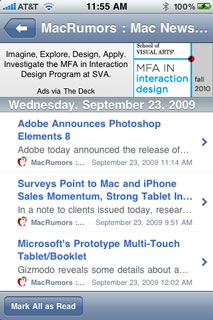 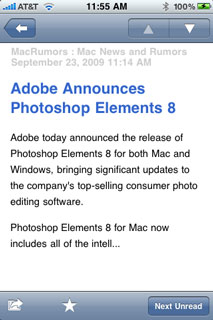 NewsGator, the developer of social networking and widget services for businesses and consumers, now has an updated version of its iPhone RSS app, NetNewsWire, available in the App Store today. Additionally, a beta version of its desktop RSS reader for the Mac is also currently available. These latest versions of its widely-used RSS reader applications now sync with Google Reader instead of feeds managed through a NewsGator Online account.

The updated NetNewsWire iPhone app syncs quickly with Google Reader and allows users to easily email articles, send them to Instapaper, and post items to Twitter. A free version of the app is ad-supported, while a paid version priced at $1.99 shows no ads. 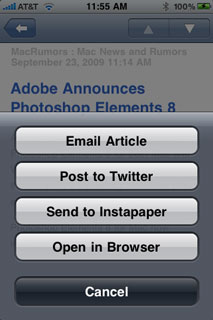 Almost a year ago to the day, NewsGator had published stats on users of its iPhone app. At that time, there were over 200,000 NetNewsWire iPhone users and it's likely that this population has grown in the past year.

The free version of NetNewsWire can be found in the App Store here and the paid version can be found here (links open iTunes). The desktop NetNewsWire application for the Mac can be downloaded here, though Newsgator cautions that this version 3.2b28 is still a beta:

Note: This is still a beta -- it's unfinished, and it has bugs and incomplete features. If you haven't started using a beta yet, you don't need to: you can wait until it's finished.
Click to expand...

Does the app allow caching of articles, e.g. for reading on the iPod touch when wi-fi isn't accessible?

Not to threadjack, but... do any of the gReader-enabled apps?
Comment

Now that this has been spoiled by adverts, what is the best premium Google Reader syncing application for iPhone?
Comment

I can't believe how bad this update is. It's a complete mess. I can't read anything now - all I see are ads!

I too am now looking for a good rss reader for the iPhone - any recommendations?
Comment

I also have to question this update. I've been using Byline to sync with Google Reader and I really like it. I downloaded the free version of NetNewsWire for the iPhone this morning and there are multiple issues with it. Primarily:

Some of these "problems" might just be me. I tried looking for instructions on how to use the app or a FAQ, but I couldn't locate anything. For example, in Byline you swipe an article's entry to mark as read/unread. So, I tried doing that with NetNewsWire, but it didn't work.

I do like the fact that you can browse by individual feeds if you wanted. This is one thing missing from Byline. However, it's not a feature I'm willing to jump ship from Byline for. At this point in time, if you're wanting an app for syncing with Google Reader, I'd recommend Byline. I have no affiliation with them and it's the only offline RSS app I've tried.
Comment
S

This was my most used app.
But I don't want to use Google anything.

Can the new version be used as standalone?

Is there any better alternative that don't use Google?
Comment

I used this app more than anything else on my iphone I cannot comprehend how something so good turns so bad overnight. It has been deleted, so can someone comment on the next best RSS app? (this really makes me mad )
Comment

Bad, very bad. I could live with the giant ad, but not all the missing features.

What the hell? I don't want google. I used this app at least 30 times a day and now it is useless! Google destroys yet another good product.
Comment

I guess sales of Byline will go up. They probably stopped making much money and took the easy way out. NNW is now just another RSS reader that pulls from goolge.
Comment
W

I think I found a bug. It appears to have dropped support for the badge count? I had a badge count before updating (894 unread items), and now it is stuck on the old badge count.
Comment
G

This really p*ss*d me off too. I delete NNW and installed Free RSS. Works great, and I can even sync feeds from Google Reader and Newsgator. (though I just imported feeds, and I didn't test if it synced)
Comment

walnuts said:
I think I found a bug.
Click to expand...

I did too. Apparently the makers were under the impression users wanted to use google.
Comment
G

There's a free version of NetNewsWire. It's called Safari + m.google.com/reader

News Feed is a much better app and deserves more news coverage than this app. The developers at News Feed actually ask users for the features they want instead of changing things without asking.
Comment

This had been one of my most-used apps too, and I really dislike the new update. Google as the source I could live with, I guess, I don't really notice a different there, I'm just bummed that there's no more badge number on the app's icon for unread stories, and that the interface in general is a little cluttered and indistinct (like, before it was a feed name and a number on a line, and now there's all these gradations and zones and in some cases ads... bleh).
Comment
M

What has happened to NetNewsWire. What's all this Google stuff? Can someone explain. Who do I complain to? I seem to have lost all my RSS feeds.
Comment

I get those sadfaced about the switch google, but you should know that newsgator's public "cloud" aggregation service NNW used to sync with is going away. Just... so you know.

That said, NNW for iPhone has been a pile of trash for a long time, not just with this update. As someone said, it's now less useful than just hitting m.google.com/reader and if you want an app to interface to that for caching that actually has some half-decent support for google reader specific features (such as adding things to your shared items) then I recommend ByLine as it's rather stable now and hosts fairly complete feature support (though still, I'm baffled about a lack of mark unread!)
Comment

zacheryjensen said:
...then I recommend ByLine as it's rather stable now and hosts fairly complete feature support (though still, I'm baffled about a lack of mark unread!)
Click to expand...

I was to when I first started using Byline. You have to swipe your finger to the left/right on the item when viewing the list of feed items. That will mark it read/unread and remove/add the blue dot next to the item letting you know the action was completed.
Comment

walnuts said:
I think I found a bug. It appears to have dropped support for the badge count? I had a badge count before updating (894 unread items), and now it is stuck on the old badge count.
Click to expand...

MikeStevens said:
What has happened to NetNewsWire. What's all this Google stuff? Can someone explain. Who do I complain to? I seem to have lost all my RSS feeds.
Click to expand...

Google reader is a very popular platform. Most people use it. It has more potential since more people want streamlined feeds across desktop, mobile (other desktops/laptops), and phones. The desktop interface may have suffered a lot since the whole social networking of google reader took place. Google reader more than likely has A LOT more users than NNW. People that don't even know what RSS is probably use google reader.

Wow - I LOVED the previous version of this app and was waiting for quite a while for the latest update. Very disappointed in the new version. Luckily I bought Newsstand the other day and am really enjoying it.
Comment
M

Axegrinder said:
I can't believe how bad this update is. It's a complete mess. I can't read anything now - all I see are ads!

I too am now looking for a good rss reader for the iPhone - any recommendations?
Click to expand...

MikeStevens said:
What has happened to NetNewsWire. What's all this Google stuff? Can someone explain. Who do I complain to? I seem to have lost all my RSS feeds.
Click to expand...

They've been sending out e-mails over the past two months about the upcoming change.
Comment
A

I don´t get why people complain so much about Google Reader in NNW, it gives people an easy way to switch between RSS readers. I for one is very happy that they standardized the app like this, and I think is has lots of improvements.
Comment
You must log in or register to reply here.
Share:
Facebook Twitter Reddit Email Share Link
Register on MacRumors! This sidebar will go away, and you'll see fewer ads.
Sign Up
Top Bottom