Dell yesterday unveiled its new $2500 27-inch 5K monitor (UP2715K) that boasts an impressive 5120 x 2880 resolution at 218 pixels per inch. This ultra-high resolution places the monitor on par with Apple's Retina MacBook Pro, which has a pixel density of 220 pixels per inch, and would be the equivalent of a Retina 27-inch iMac or Apple Thunderbolt Display. 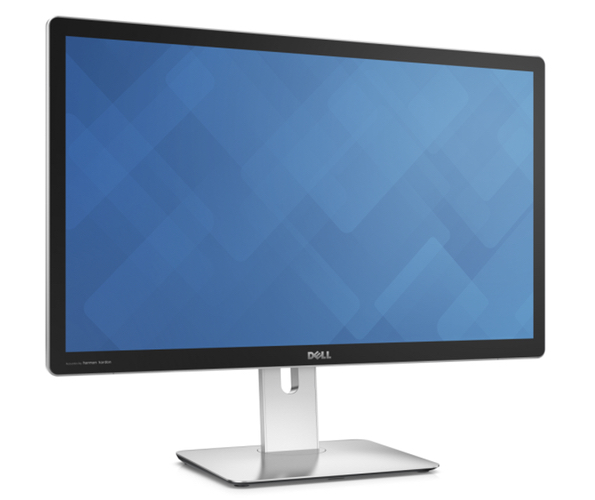 Dell does not detail the technology powering the monitor, but AnandTech believes the company is using Multi-Stream Transport (MST) to stitch together two 2560 x 2880 panels in order to provide 5120 pixels horizontally. Dell demoed the monitor to Maximum PC using a 5K H.265 video streamed from a workstation-class NVIDIA Quadro K5000 video card.

As outlined in our display roundup, customers have been looking toward a higher-resolution large display from Apple for some time, whether it be a true Retina version of the existing display or a somewhat lower resolution 4K display, particularly since Apple has been touting the 4K capabilities of the new Mac Pro. Rumors of Retina iMacs date back to 2012, but the machines have yet to appear, likely due to both cost and technological constraints.

With Dell listing its display at $2500, it is clear pricing remains a challenge for Apple's ambitions to launch Retina iMacs and standalone displays. Standalone displays may stand a better chance, as Apple has historically been willing to develop expensive large-screen displays priced in the thousands of dollars for its pro-level customers. An iMac almost certainly priced well north of $3000 could be a difficult proposition, however, so Apple may yet need more time for prices to come down before such a machine becomes commercially feasible.

Besides its impressive resolution, Dell's monitor ships with Dell's PremierColor technology and an edge-to-edge glass that includes both anti-smudge and anti-reflective properties. Also included in the display is an integrated media reader, six USB ports and 16W Harmon Kardon speakers. Video out support includes dual DisplayPort 1.2 ports for 5K video and a miniDisplayPort for 4K operation.

Dell's UltraSharp 27 Ultra HD 5K monitor will be available in the fourth quarter of this year.

Holding out for 6k.
M

I would wait in line for an iMac with this.
R

sulpfiction said:
Holding out for 6k.
Click to expand...

Seems like an intermediary step. 8k is already hitting the market and will become standard in a year or two. Why not just get a 4k monitor for now? Are the extra pixels in a 5k really worth it?
S

That's pretty nice, but damn, that price! Not going to be any cheaper with the Apple tax either.
S

If they put this in a 27" iMac, my credit card is getting destroyed!!
K

is this resolution supported by mac pros 6,1?

jayducharme said:
Seems like an intermediary step. 8k is already hitting the market and will become standard in a year or two. Why not just get a 4k monitor for now? Are the extra pixels in a 5k really worth it?
Click to expand...

8K will not be standard in a year or two, period. You can quote me on that.

I doubt the adoption of 4K will be that great two years from now.

jayducharme said:
Seems like an intermediary step. 8k is already hitting the market and will become standard in a year or two. Why not just get a 4k monitor for now? Are the extra pixels in a 5k really worth it?
Click to expand...

The point is it is a pixel doubling of the current 27" iMac screen. The iMac didn't have a TV resolution before, and it doesn't need it now.

My 2011 i7 iMac still runs like a champ. No interest in upgrading. But the minute a retina iMac is out, I'm pulling the trigger.

Please be real. If they announce a retina iMac next week I will be so stoked, but it probably will be a while I fear.

It sounds unlikely to show up on an iMac. 4k is more likely. I think we are overdue for a bump up on resolution. Not that the current iMac is that bad on resolution, but in this case more is better

Finally! UHD is way to low for big screens in "retina mode"

Its a beautiful monitor, but yet, at that given price point, I cannot see such a display panel being used in an iMac. Its just too expensive at the moment.

DELL make some damn fine monitors. Wish I had the pocket change for this beauty.

Nice monitor but they still have a rather large bezel...
S

This is a good step. So now we DO know that the display for a 27" retina iMac display is possible. I'm sure a prototype iMac already exists(In fact, I would say probably for at least a year or two now), but there is no way that this iMac would cost any less than $3000 for base config.

Also giving how apple focuses on having Macs have environmentally friendly certifications, they are also probably having a hard time with power consumption and heat. The backlight alone must be ridiculous at max brightness. Couple that with an i7 and 880M, and Apple has some work to do.
Last edited: Sep 5, 2014
C

4 or 5k iMacs displays powered by a mobile GPU... nice, I can't wait for the lag, and subsequent chip meltdown in one of those tight cases with poor ventilation.
V

No way does it make sense to do this for an iMac. Monitors last for years and years (my Cinema Displays are 6 and 8 years old).

Apple would do this for a standalone but not for an iMac. A few people would buy one but not enough to make it worthwhile.