Hello everybody,
meanwhile I wait for my new Imac which I ordered with the 10 Gigabit LAN module I asked myself if anybody could be so nice and give me a recommendation for a well performance NAS that will work well with the new Imac and that support the 10 Gigabit LAN speed.
Has anybody here a good suggestion for me regarding producer and model type a great NAS?

Thank you very much in advance.

The first question is do you really need / want a NAS and not a Thunderbolt 3 based disk array, especially if you are looking for performance. 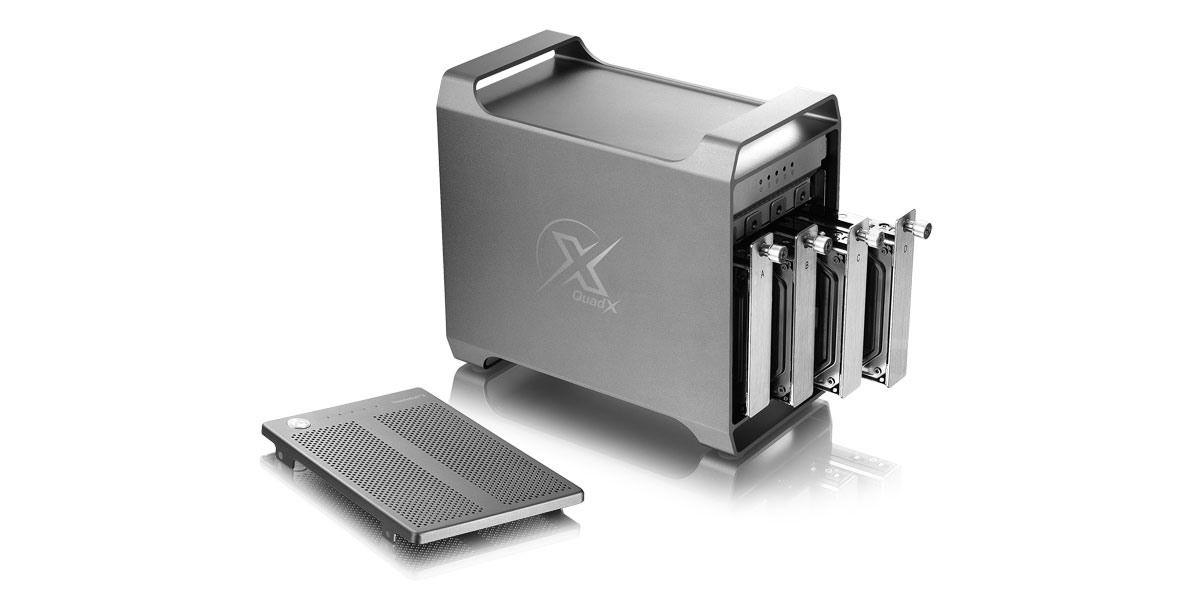 This 4-bay storage enclosure is designed to house four 2.5' or 3.5' drives. The Thunderbolt 3 interface provides lighting fast transfer speeds up to 40 Gbps

NAS: QNAP and Synology are your best choices.
M

Deat Seb thank you very much for your helpful question, I would say speed sounds good, therefore I find your recommendation example very useful ans interesting.
Is this your first choice regarding the producer and the model?

Another question ist, how will the DAS perform with normal HDD s 3,5“ regarding the performance vs an SSD solution?
Best regards,
Marc

You're probably not going to saturate gigabit LAN let alone 10 gig or TB with platter drives. I have an old Mac Pro that I use as a server, it's got 4 4TB drives in RAID 10 and I'm not even getting close to saturating gigabit.

If you want fast mass storage only for the iMac just get a TB enclosure and fill it with SSD's, if you want to serve more than that computer look into NAS whether you do SSD or platter.

If the OP is planning on doing large file sequential reads and writes all day, then he will easily saturate 1 Gigabit LAN connection with just one decent 3.5" 7200 RPM hard drive. Saturating a 10 Gigabit connection would definitely take quite a lot more drives and RAID 0, which would be funny for a little bit, but suicidal

@Magnusch , can you tell us more about the use cases and your budget? Otherwise it's like shooting fish in a barrel. 10 Gigabit NAS are not cheap and I am pretty sure no one is making one with less than 4 drive bays. How much space and performance do you actually need?

Personally I am still in the dark ages and I don't have a Mac with Thunderbolt 3. I use a Promise Pegasus (? I think) 4 drive enclosure connected via Thunderbolt 2 to my trash can Mac Pro. It works very well, but Promise is more expensive than Akitio. I have not used Akitio before, but they have been around for a long time and I have only read good things about their stuff. The reason why I chose Promise over Akitio back in the day was purely because it's easier to buy from the Apple store and my company is on the simple VAT scheme in the UK. This means that I have to purchase stuff over £2000 on a single invoice to get VAT back and I bought something else as well to make up the total. If I was buying it personally then I would have gone for the cheaper Akitio.

A DAS will perform as fast as the hard drives can, depending on how many bays you have and whether you use them JBOD (just a bunch of drives) or in RAID. Bear in mind that everything we have discussed so far is using SATA connections. So if you are really needing performance, then you can of course buy SATA SSDs. These are faster than a HDD, but slower than a PCIe based SSD, like the one found in your iMac. Again though... unless you are copying > 10 GiB back and forth all day, it's unlikely you will notice this difference. Use case is important. For ultimate performance you can get a TB3 enclosure that will hold PCIe SSDs (up to gen 3). Of course as you move from HDD --> SATA SSD --> PCIe SSD than the price per TB increases a lot.
M

Last application will be a hopefully quick timemachine backup.

The Akitia solution looks nice in adition with a SSD or two.
G

The Synology DS1621xs+ was a recent 10 Gb NAS enclosure that I read about a little while ago and may be worth reading about. That said, if you are only or predominantly using your iMac to access this data, DAS seems to make more sense to me.

So far with the information we have, what comes to my (non-professional) mind is this...for applications one, two, and three, a 4-6 disk bay enclosure using higher capacity 3.5-inch HDDs in either a hardware RAID 6 or RAID 10 configuration to give you reasonable working speeds as well as ample-to-substantial protection from physical disk failure. (Then for Time Machine, a different external drive entirely.) Promise, Akitio, Synology, and QNAP all make great products. If you are looking for something solid out of the box and pricing is not the top concern, the Promise Pegasus32 R6 is what immediately comes to mind assuming you need somewhere on the order of 15+ terabytes (edit - I may be way off with the 15+ TB assumption...I just threw out a large number as I know uncompressed audio files can get massive very quickly.)