There are only few applications opening at the moment, using very little resources, however, there's only 800mb memory free out of 4GB of memory.

Please have alook at my activity monitor screenshot below:
I greatly appreciate all the help. Thanks in advance. 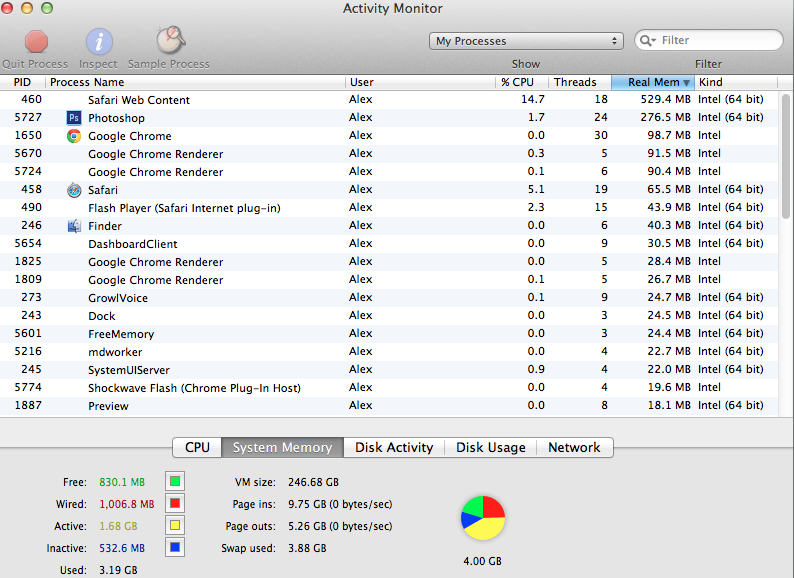 I have 4gb of ram already. isnt that enough?
I just don't quite get how come 3gb of ram is used up already, with so little applications opened.
Comment

The minimum to use OS X Lion is 4GB ram. Therefore it's really not enough. Upgrade to 8GB and you'll see a huge difference in your MBP's performance.
Comment
I

ugh!! just got this laptop brand new, was expecting it to run fine right out of the box!

Which brand of ram do you guys recommend? and what should i do with the old ones?
Comment

Actually, you have 1.4GB free - the blue section is free for use when needed. The OS keeps it assigned when you close a program so it will be faster to load, but it will be used if it's needed.

A rough addition of those items listed comes to about 1.5GB. Your Chrome and Safari together are using about 1GB. I'd suggest using just one browser.

Were you doing some Photoshop work earlier? That's probably where the Page Outs came from - you have enough free memory for what you're doing right now. But if you're going to be doing Photoshop work, you should get more RAM. The new MBPs can take up to 16GB - if you want to play it safe 16GB costs $160 from Crucial - http://www.crucial.com/store/listpa...ntel Core i5 (13-inch DDR3) Late-2011&Cat=RAM

But as for right now, my budget won't allow me getting 16GB, I will be getting 8GB instead.

If you can't afford 16GB right now, I would suggest you get one 8GB stick now and budget for another one later. Replacing one of your 2GB sticks would give you 10GB. Yes, matched RAM (i.e. 2x8) would be better, but the extra RAM with 2GB + 8GB would be better than 2x4GB in Photoshop. It would save you money in the long run.

Edit: By the way, the most helpful favorable review on that link you posted is "excellent memory for a MBP 2011 i5 13'". In fact most of the reviews seem to be from Mac users.
Last edited: Jun 2, 2012
Comment

Whenever you're using Adobe applications, you generally want more RAM. I regularly use Photoshop, Illustrator and InDesign, and 8GB is fine for me. Unless you're editing absolutely huge, complex files you shouldn't need 16GB.

The link you posted for RAM is exactly what I ordered for my early 2011 15" MBP. I've had it for several months now and it's running perfectly.
Comment
M

immalex said:
ugh!! just got this laptop brand new, was expecting it to run fine right out of the box!

Which brand of ram do you guys recommend? and what should i do with the old ones?
Click to expand...

Are you new to Macs? If so, don't feel bad about the RAM issue... Apple has always installed the minimum amount of RAM necessary for basic computing. Once you start running apps like Photoshop 8GB RAM or more is required.

FWIW, I have 8GB RAM in a 13" MBP. It runs multiple apps including Photoshop without a hiccup. Of course, I do minimal image editing... If I was working with large files and/or multiple edits then even 8GB RAM might choke under the strain.
Comment
You must log in or register to reply here.
Share:
Facebook Twitter Reddit Email Share Link
Register on MacRumors! This sidebar will go away, and you'll see fewer ads.
Sign Up
Top Bottom