No matter what they paid for that, they got ripped off.
That can't have been a professional that designed it, can it?
M

No matter what they paid for that, they got ripped off.
That can't have been a professional that designed it, can it?
Click to expand...

The current NBC-Universal logo was a work in progress at the start. The logo released when GE purchased Universal from Vivendi-Universal was quite different from the logo in use today. I don't see the need to change the logo. If it does change it, then I hope that Comcast puts a few more resources into the job that would seem to be indicated by this first effort.
Comment

How is this a logo? Surely it's just the name of the company typed on a blue background? Can they really  this....
Comment

Apearently the maker got the bsof while painting the logo and thought "well i have to get this done whitin the deadline" and just draw this in MSpaint.
Comment

Not a big fan of that logo, if that's what it would be called. More like a college student's type treatment.

The previous version looks like out-of-the-box Copperplate, while the new wordmark looks like an customized, updated take on that typeface, including the lowercase letters that Copperplate lacks. I definitely like the new mark better than the old one. And isn't it time to put the peacock to bed?
Comment

Well, they could have just removed the ellipse if they wanted to simplify, not all traces of graphics. This is what can happen when blue suits take over design decisions.
Comment
1

Kind of reminds me of the Sony Pictures Classic logo, and not in a good way.

Perhaps '30 Rock' will have some fun with this change as well.

NBC has it's own custom font for their logo.
Corporate Branding is just a whole 'nother beast.. lots of money but not always the best looking. That's what happens when you deal with a board.

Gonna miss that peacock, I actually liked it
Comment

must have been ... bring your kid to work day
Comment

citizenzen said:
The previous version looks like out-of-the-box Copperplate, while the new wordmark looks like an customized, updated take on that typeface, including the lowercase letters that Copperplate lacks. I definitely like the new mark better than the old one. And isn't it time to put the peacock to bed?
Click to expand...

One thing that you need to understand is that the new logo is not the new logo for NBC. It is the new logo for NBCUniversal, which is a multi-national media corporation that includes NBC. Compared to the old logo, the new logo has several missing features: the NBC peacock, the Universal circle (globe), the space between "NBC" and "UNIVERSAL," and creative thought invested in its design.

You may view the new logo here.
Comment
C

I'm just so happy to see them move away from Copperplate.

I'm just glad they got rid of Zucker. Maybe Comcast will get someone in there that can get a long with technology companies like Apple.

How the producer of the Today Show became the CEO of one of the largest media conglomerates in the world I'll never know.
Comment

I'm just so happy to see them move away from Copperplate.

As far as I can tell, the new typeface is very similar to the old typeface with lowercase characters added. I would call it lots of things, but I would not call the new typeface an improvement.
Comment
S

NBC has gotten ripped off on a logo. 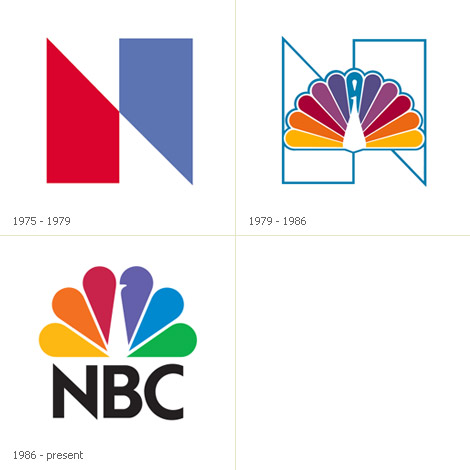 sittnick said:
NBC has gotten ripped off on a logo.

Yes, I remember. NBC's current logo has not changed since 1986 making it 25 years old. That makes it older than the original peacock when it was replaced by the Nebraska Public Television "N" in 1975. What is your point?
Last edited: Feb 1, 2011
Comment
S

I thought the point would be self-evident.

The Nebraska "N" was poorly received and swiftly diminished. It is to this day considered one of the all-time foul-ups in logo changes.

You stated that the current logo lasted longer than the original peacock. That may well be, but iconic companies do better if the changes aren't such a radical departure. The basic thrust of the CBS "eye" has been with us for over 50 years. The ABC ball is virtually unchanged over the decades.

Even though the '70s was an era of ill-advised logo changes, it should have been seen that the red/blue etch-a-sketch N would not age well.

While the new logo may be less anchored in an era, it does nothing to make a distinctive emblem for a company that ought to have one, the way that the GE meatball, Chevy bowtie or the Ford oval do for their respective companies.
Comment
J

It's not the new NBC logo.

It's the logo for their parent company, NBCUniversal.

I know it's fun for everyone to play Art Director (because we know you can do it better) but critique it for what it is.
Comment

The Nebraska "N" was poorly received and swiftly diminished. It is to this day considered one of the all-time foul-ups in logo changes.

You stated that the current logo lasted longer than the original peacock. ...
Click to expand...

sittnick said:
NBC has gotten ripped off on a logo.

Heck, I remember this as the logo

jmacleodpc19 said:
I know it's fun for everyone to play Art Director (because we know you can do it better) but critique it for what it is.
Click to expand...

Someone used a different font. That's it. It doesn't even take a design student to do that.
Comment

maflynn said:
Heck, I remember this as the logo

Yes. The single-stroke NBC logo was contemporaneous with the original NBC peacock. This logo was used on NBC equipment. It also ran after each NBC program. The original peacock was not so much a logo as it was an opening for NBC color programming. It was accompanied by the voiceover declaring: "The following program is brought to you in living color on NBC." For those too young to remember, until the mid-1960s only NBC had color programming among the three TV networks. CBS and ABC did not broadcast in color on a regular basis until 1966, IIRC. The NBC peacock was a really big deal even though it was not the logo. It meant that you were about to see a show being broadcast in color.

With the 1975 introduction of the Nebraska N, NBC retired both the peacock and the single-stroke NBC. By then, color was universal. Therefore, the Nebraska N never played the same role as the peacock.
Comment
S

Are you kidding? It was a laughing stock, and the Nebraska story was a mere side line, almost as small as what Apple had to pay for the use of the term iPhone, which was already used by Infogear (in a very slight variation) or some such company.

Were you of age at the time? Everyone from art critics and local station affiliates to regular broadcast TV watchers thought it was obscure. I assume that you were old enough to remember the unhappy introduction, and like many read the local papers, the wire services, TV Guide magazine, etc. Only other TV networks stayed out of the fray.

Moreover, while NBC felt they had to stick with it for some time, you can see from my earlier post that the N was already in the background of a newly stylized peacock only FOUR years later. Even before then, it was shrunk and stuck in a corner. Saying it lasted 11 years is like saying New Formula Coke lasted 11 years.
Comment
C

I'm 50 and definitely remember the unfortunate rollout of the NBC logo, though I don't recall how long NBC continued to use it.